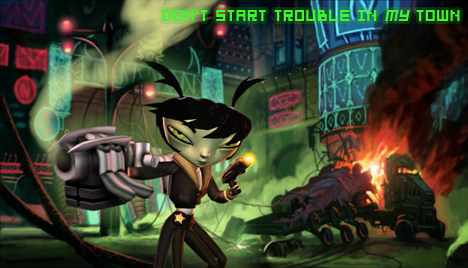 Detective Chrys Liszt is tired of crime in the city of Troi and she isn’t going to take it anymore! Along with fellow anthropomorphic insect partner, Roachy Caruthers, she’ll be gathering clues and gunning down baddies in the first part of Crackpot Entertainment’s “bisodic” downloadable series, Insecticide, which has just gone gold.

Combing elements of more traditional point-and-click adventure games with third-person shooting and platforming sequences, Insecticide certainly has an interesting concept. And considering all of the extra development time that Crackpot has had — the game was supposed to release sometime in 2007 January 8 February 12 — they should have had plenty of time to get the two distinct types of gameplay finely tuned, something I’m always glad to see a developer do.

Check out the gallery for some new screens of the Gamecock-published title and hit the jump if you’re into PR speak.  Insecticide will be available for download on paradox, Direct2Drive, and GameTap on June 13 with a $14.99 price tag. Say what you will about saved shelf space, but not having a physical copy of a game has always left me feeling a little uneasy. I guess I’m just a collector at heart.

So is anyone planning to bust some bad bugs later this month?

(And before you start spamming the comments with exclamations of “Who the hell is Justin Villasenor!?” take a look over here to answer your question.) 😉

The Buggiest Action-Adventure Title Ever Only A Week Away

Chrys Liszt is a rookie detective eager to make her presence known by eradicating crime in Troi. However, Chrys quickly discovers that her objective is easier said than done. What starts off as a string of petty crimes is, in fact, part of an intricate chain of events that will leave Chrys smack-dab in the middle of an epic mystery with Troi’s powerful elite.

The PC version of Insecticide promises more voice-overs and video than ever before and brings the world of Troi to life in a way that has yet to be experienced by gamers, raising the quality not typically seen in a downloadable title.

The downloadable Part 1 of ‘Insecticide’ on PC will be available June 13 for $14.99 through paradox, Direct2Drive, and GameTap. Visit www.insecticidethegame.com to learn more.