A look at how the boarst is made

I couldn’t shake a fascinating thought as I left the E3 press demo for The Outer Worlds: Obsidian Entertainment quite obviously put together a chunk of gameplay to draw comparisons to Fallout: New Vegas. Why? To prove someone can still make a great Fallout-like game even if it’s not Fallout in name? Whatever’s happening, Obsidian’s just flexing at this point.

According to Obsidian, our E3 presentation wasn’t specially prepared in any way. No vertical slices, no content that was never designed to be in the final version of the game. This was just 20 minutes ripped out to serve as a sampler platter of some of The Outer Worlds‘ finer features.

The demo starts in a rough town called Fallbrook, a civilization that’s bypassing a trade blockade because of some fortunate organized crime. Their leader is Catherine Malin, and she wants us to go kill off the Boarst King of Monarch. (This is the part of the preview where I tell you that boarst is a “sustainable meat product” grown by injecting pigs until they grow tumors all over their bodies. The tumors eventually fall off, are gathered up, and packaged for human consumption. Boarst: It’s what’s for dinner.)

Talking with Catherine, we see how The Outer Worlds might be paradise for people who are heavily invested in deep role-playing. Nearly every conversation in the demo comes with some sort of skill check in the dialogue. Charismatic characters can charm their way into unique situations. Gruff characters can get their way through intimidation. There’s more. Every build won’t be able to affect the outcome of every conversation, but it seems like there might be something for someone during most dialogue.

The greater result is that it leaves The Outer Worlds feeling far from predetermined. This extends to other facets that we’re shown. While infiltrating the Boarst Guy’s factory, we’re left to decide whether we want to find a secret entrance in the sewers, go in guns blazing and bullets flying, or try our luck wearing a holographic cloaking shroud and sneaking past all the security. 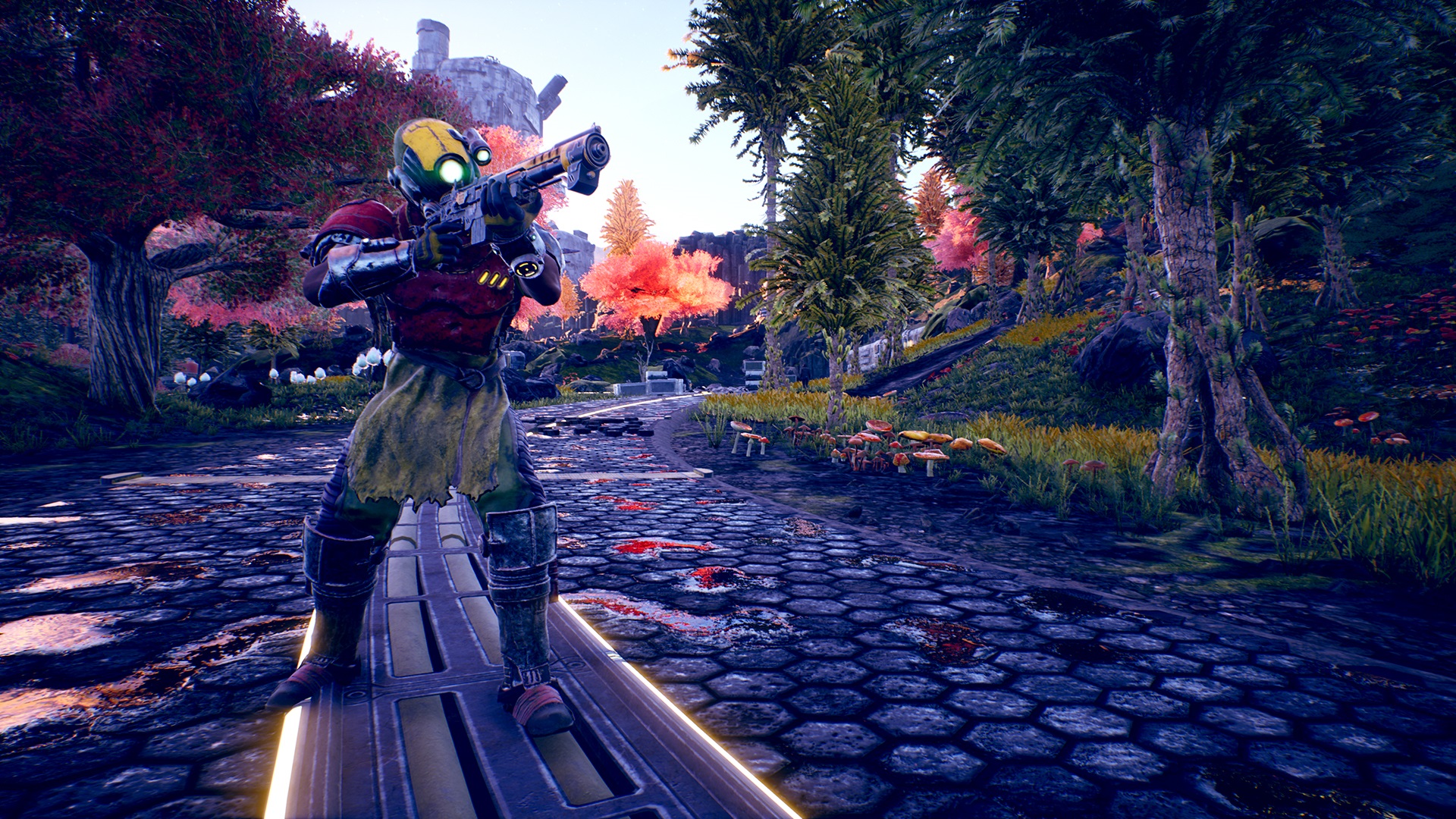 Ironically, Obsidian didn’t give us a choice. That’s probably because the shroud is neat enough to spotlight. It’s a device that relies on some video game suspension of disbelief to buy into. The shroud automatically outfits you in the garb of the people who patrol the area you’re sneaking into. It drains whenever you move, making navigation a risk/reward of trying to get as far past enemies as you possibly can. However, it refills whenever you pass a speech check or enter a new room. Chalk it up to faraway intergalactic future tech…or something.

The shroud made it so we rarely had to fight, but Obsidian made sure to demonstrate how combat works. Playing The Outer Worlds as a pure first-person shooter is probably viable but no one is going to do that. Instead, players will lean on Tactical Time Dilution (TTD for short), which is a way of slowing time to a crawl in order to line up headshots or advantageous assaults. After upgrading TTD, it can be used to auto-target the limbs and weak spots on enemies.

If the Fallout: New Vegas comparisons weren’t yet convincing, they should be by now. TTD is a spin on VATS — the slightest spin at that — and it’s not really up for debate. 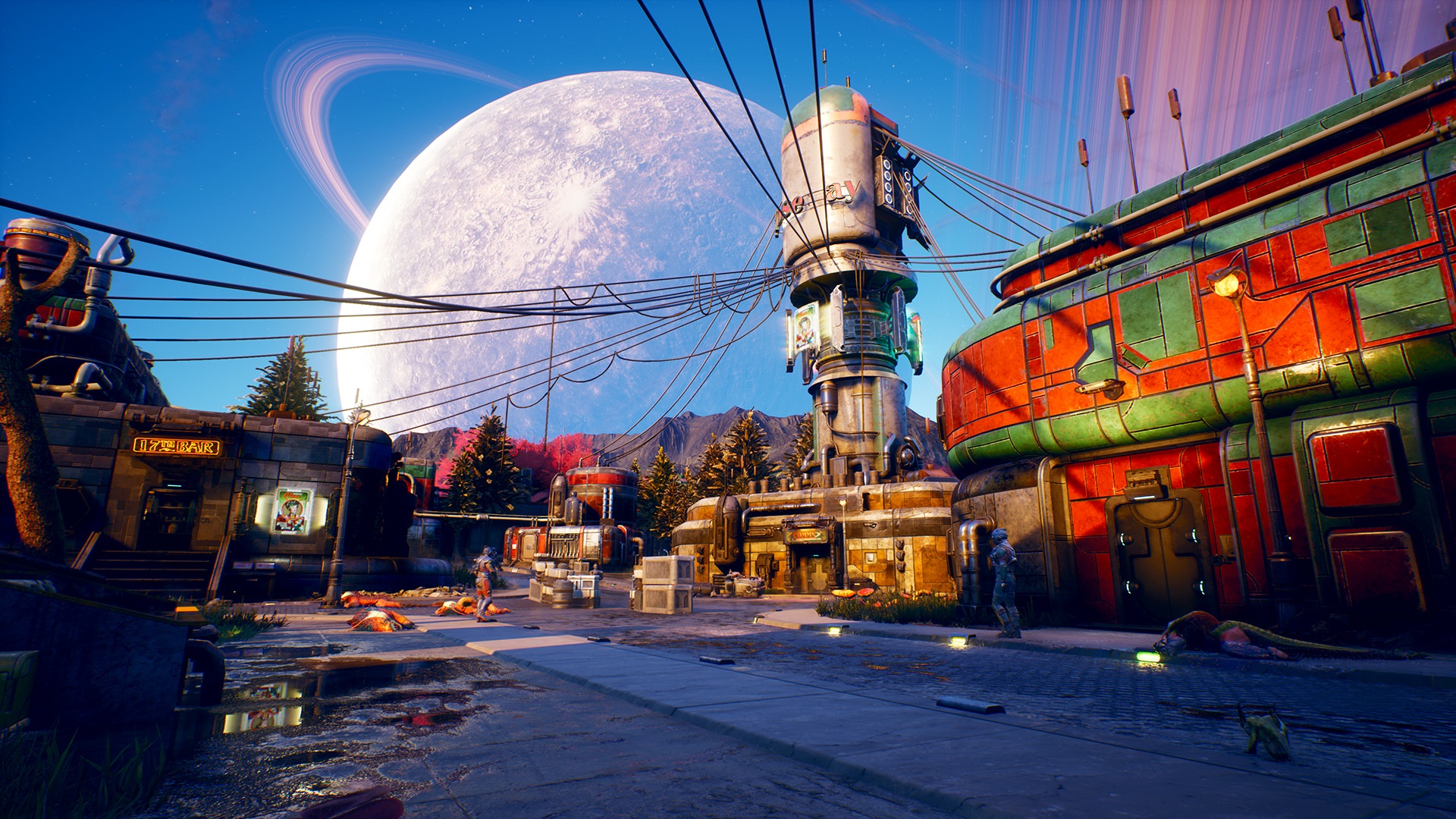 Eventually, we got to Mr. Boarst with intention to end his life. But, he got to sweet-talking us. He proposes that instead of killing him, we double-cross Catherine and murder her. His bargaining chip? A lifetime supply of boarst. It’s, ummmm, compelling. We’re left with a cliffhanger, but Obsidian’s spokesperson tells us we could side with either party or find a way to get them to coexist. We’ll have to wait until the October 25 launch to decide how that storyline resolves.

We can likely expect The Outer Worlds will be deep. It seems like it has all the winding narratives, unique locations, and legitimate role-playing that Obsidian excels at delivering. It’s a bit surprising that it’s so reminiscent of Fallout: New Vegas, though. Don’t interpret that last sentence as a bad thing. Someone has to make a good Fallout game. This looks like it’s it — it’s just devoid of the Fallout namesake.