Games are fun, and you can’t really deny that they’ve got “fun” pretty streamlined and perfected at this point. They’re so fun that people have been hooked enough to forget the basic necessities of life — food, water, women — and have died as a result…a puzzlingly funny result, mind you. For me, though, the fun of games is starting to die off, and I now think it’s time for developers and fans to perfect a severely unrefined element of video games: storytelling.

I understand that this industry tends to treat story like the fortune cookie in an order of Chinese food. If it’s there, cool. If it isn’t … whatever. Developers have become so accustomed to disregarding narrative, that few consumers complain if it is absent completely. But it’s difficult to ignore the impact that storytelling has had on other mediums, as well as the fact that certain games have hooked people mainly due to their narrative structures — be them good or bad. For me, Star Wars: The Old Republic is one of those games.

The Old Republic belongs to a genre that I’ve always considered one of the least amusing, but its story has kept me more interested than any other MMO to date. 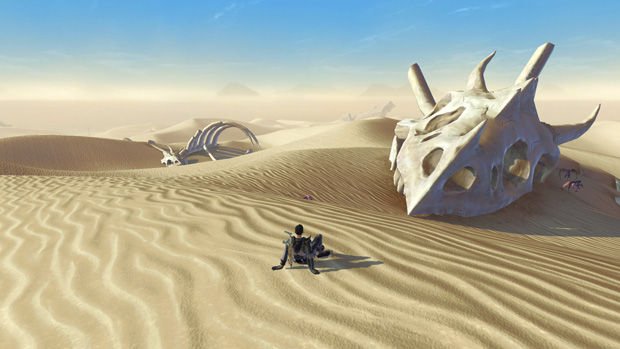 Let me just get this out of the way: The Old Republic isn’t going to win a Pulitzer Prize anytime soon. It’s structured in the familiar Star Wars fashion — the “hero’s journey” that inspired the original films. Still, while not many risks were taken, the writing is strong and each class’s story is presented well, which can be considered pure gold in this genre that was originally quite devoid of any real narrative. Playing TOR reminds me just how important storytelling is, especially when I used to consider MMOs to be some of the most boring and repetitive games on the market.

I can understand the appeal of MMOs to some people: They have deep gameplay mechanics, feature a seemingly limitless community, and place you in the middle of a nearly unrestricted world. But from the standpoint of a sane human, the genre has always seemed like the equivalent of continuously flicking your right testicle to receive a piece of candy from time to time. To me, MMOs seem to retain a lot of the most basic no-nos of game design: They’re repetitive from the start, their progression and difficulty curve are painfully slow, and their control scheme becomes ludicrously complex and unintuitive. Yet gamers still suck these games up like *insert SFW porn star joke here*. 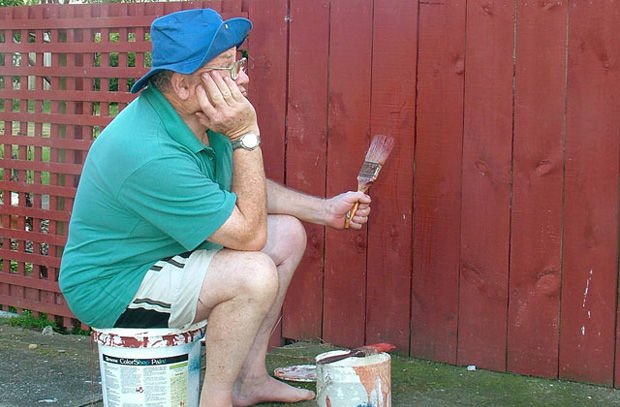 The typical MMO experience to me.

Interestingly enough, The Old Republic features a lot of these broken rules. I stepped away from the game for about an hour, and I had already forgotten how to play the damned thing. But I keep coming back because the narrative experience not only adds to the cheaply addictive qualities of the genre, but it also provides a steady flow of new content. Few people realize that story is quite easy (enough for The Old Republic to get away with repeat dialogue), so it’s not much of a hassle to provide fresh content in the form of character development, conflicts, and plot twists. When you compare such an approach to other titles that emphasize nothing but gameplay (e.g. the other ball-numbing MMOs out there), it’s easy to see how narrative can be an equally valuable asset to the development process.

The Old Republic features the typical fetch and kill quests that MMOs are known for, but the real meat of the experience lies with its class quests. Each one is different from the next, and they all retain a cohesive story that can draw you in and make you feel pretty invested. The Jedi Consular embarks on an adventure to discover the origins of the Force. The Sith Agent is deployed to thwart a sinister terrorist plot to destroy the Empire’s leadership. As a Sith Warrior, I learned that the Sith are an “opportunistic culture,” and will take every chance they get to gain an advantage — even if it means murder. I’ve learned that the Empire suffers from a lot of the same problems that any totalitarian culture would: corruption, greed, abuse of power, and the inequality of a caste society. I’ve been given context in a seamless world that other MMOs would have simply dropped me into, indirectly saying, “Figure it out if you want.” The Old Republic understands that making me a part of the story causes me to feel like I’m actually a part of the setting and the game itself. 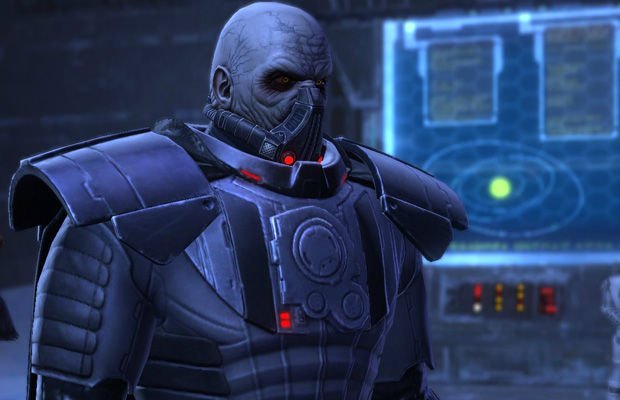 I don’t know why, but I can even be a douche to Darth Malgus.

Essentially, this game is eight sequels to Star Wars: Knights of the Old Republic … all because of an emphasis on story. And like its spiritual predecessor, TOR throws you a few moral curveballs. An officer hired me to “punish” his wife, who was having an affair with a known Republic spy. Considering my loyalty to the Sith, of course I went through with it … even after she claimed ignorance, begged for leniency and bribed me with more than my original reward. An undercover informant managed to help me get in good with the leader of a terrorist cell on Balmorra. Following the opportunistic tendencies of the Sith, I killed him to better prove my “legitimacy” to the leader — despite the fact that he was actually a nice guy and did his job admirably. The narrative and the decisions it offered have given my saga some real substance, and while I’ve mainly chosen the more entertaining approach of cartoon villainy, I’ve reached moments where I felt like kind of an asshole for murdering or betraying people … and I’m not the only one.

All of those experiences, while nothing we haven’t already seen elsewhere, equal something a little deeper and richer than what we’d get if we merely acquired … well, experience points. Playing a game is only part of the fun; a big reason we enjoy games is because of the resonating adventures we have in them. Knights of the Old Republic left a pretty big impact on the industry and the people who have played it, all due to its immersive take on video game narrative, its thought-provoking writing, interesting supporting characters, and one of the most “holy shit” moments in gaming history. Games like these are so memorable because they’re not so much about what you’re doing, but more about why you’re doing it.

Remember this? Of course you do…

For some odd reason, most developers still haven’t learned by example. Either they leave out story entirely, or they shoehorn in some messy, incoherent one that exposes it as an afterthought. A lot of times, even the “best” stories are ripe with elementary problems. Solid Snake never seems to know what the fuck is going on around him, yet he’s some ultimate soldier that everyone turns to. Some of the most recognizable faces in this industry are also the ones who say little to nothing at all (Link, Gordon Freeman, Master Chief). While I worked at GamePro, I remember walking into the middle of an Assassin’s Creed presentation, seeing Desmond trudging through the Abstergo laboratory and thinking, “Did they really have to put science fiction in this?”

Developers seem to be focusing on areas that don’t need much attention anymore (graphics, gameplay), and leaving areas like narrative on the backburner. It’s as if they think storytelling is some ancient, obsolete device that happens to be in their product, like those faux cigarette lighters you find in newer cars. Yet, here we are in the 21st century, roughly 1,000 years after the first legitimate novel was created, and we’re still witnessing epic tales that blow us away.

Unfortunately, such hackneyed storytelling in games can’t only be blamed on developers. The majority of gamers have considerably lax standards when it comes to story (considering the cluster fuck of clichés and meaningless exposition that is the Final Fantasy series). It’s almost as if we pretend to not really care about storytelling at all … when we really do. I see franchises with sequels that go into double-digits, and that tells me we really, really do care. Whenever I tell geeks that I don’t read comic books, they look at me as if I have a dick drawn on my forehead.

So then why does this market keep settling for average, tepid narratives? We basically care enough to buy sequels, but we don’t bother addressing the fallacies of those sequels. It’s like we become numb to the mediocrity. When Assassin’s Creed was first released, many media outlets were open about issues they had with the story — its complexity and inconsistency. But as sequels were released, and the game continued to become more obscure, they suddenly got used to it. They pretty much said, “Eh, fuck it. Good enough.” If we don’t somehow demand better narratives, then developers are going to continue half-assing them, duh. 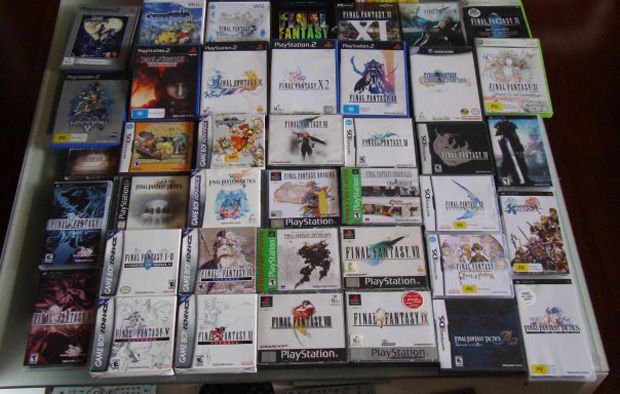 Consider BioWare: they get it. They understand the value that story can have in a game. So much that they bring on New York Times bestselling authors like Drew Karpyshyn — the literary mind behind Star Wars: Knights of the Old Republic and Mass Effect. They even have regular full-time writers, such David Gaider (Dragon Age). Thanks to the talents of men like these, I’m fairly sure that most of you have fond feelings for these games.

Let me just be clear, I do think that games are great the way they are now. They’re an engaging form of entertainment that is sometimes impossible to put down. But you can’t deny that they could be much better … in specific areas, at least. One of those areas, again, got me interested in a genre that, at one time, I would have gladly substituted with a Prince Albert.

The minds behind Star Wars: The Old Republic realized the value of story, and while it remains to be seen whether or not my interest will last, I can say right now that I fidget impatiently to finish this article … so I can get back to uncovering a terrorist plot that threatens my beloved Empire.