Eight deadly assassins are hunting you down

Batman: Arkham Origins is a prequel in the Arkham franchise, following a Batman who’s more myth than legend at this point in his crime fighting career. This is a younger Bruce Wayne, more agile in combat yet still equipped with plenty of gadgets to help clean up the streets of Gotham.

This Batman game is also being developed by Warner Bros. Montreal while former developer Rocksteady Games is busy doing who knows what. Normally, you’d have every right to be wary of a new developer taking hold of a beloved franchise, but I don’t think you have to worry here based on my recent hands-on time.

The dangers that await you in Gotham

Bruce has been Batman for only a short time when players take control of him in Origins, and he’s gotten used to taking on average, weaker criminals. That all changes on this particular Christmas Eve night as Black Mask, the biggest crime boss in Gotham, has hired eight assassins to hunt down the Bat.

You’ll have to deal with these assassins plus Black Mask himself in a Gotham that’s double the size of what we had in Arkham City. That’s largely thanks to the fact that Arkham City prison has yet to be built, so you not have two islands offering a lot more vertical gameplay.

Deathstroke is one of the assassins after you, but there are more DC characters beyond those you’ll be facing in the main story, such as the ones you’ll be encountering in the Most Wanted multi-tiered side story missions. One such example is Anarky, a villain who has an obsession with Batman, and he has planted a bomb that you must defuse before it goes off.

There are new basic enemy types too, like the martial artists who are able to counter Batman’s moves. You can counter their counters, but they can counter again, making for some interesting fights. I also saw heavily armored goons who you have to wear down then strip of their armor before you’re able to knock them out. A younger Batman means he can punches faster, throwing off a lightning-quick succession of punches in fights against heavy units. 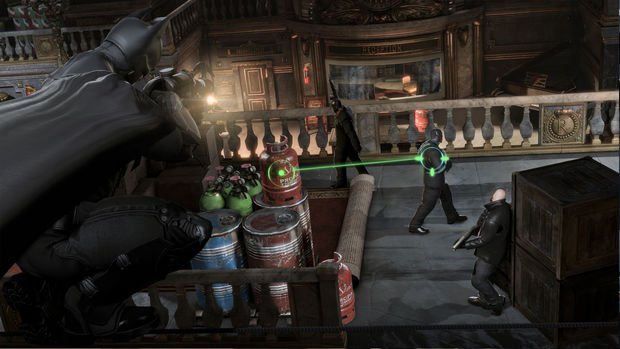 The natural open world feeling is ever present in Origins, and you’ll come across any number of
dynamic events as you’re trying to complete quests. You’ll be able to intercept 911 calls, which are part of the new Crime in Progress system. In the demo, Batman intercepts a call and takes on a bunch of Black Mask goons who had just robbed a bank.

Players will get more detailed feedback on their performance after fights as well. You’re getting graded on your encounters, showing players what they can do to improve their skills.

One new tool is the Remote Claw. You’ll first select a location where you want to launch the device, then select a target to hook them. So for instance, you can select a perch on which to stick the Claw, then have the Claw grab an enemy and string him up by his legs. You can hook an explosive barrel that will pull itself into an enemy, instantly knocking them out. You can also use the Claw to create a tightrope path from one point to another.

There’s also fast travel now via the Batwing, but you’ll have to unlock access first. There are radio towers scattered across Gotham under the control by some villain, and only when you’ve liberated these towers will you gain fast travel options. 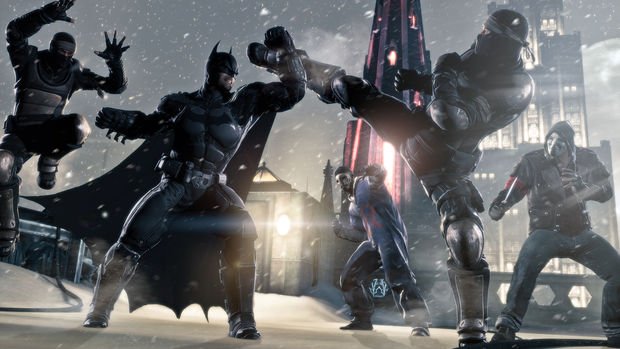 At one point, a police helicopter finds you and orders Batman to surrender. The cops don’t trust Batman at this point in history, but before anything can happen, the helicopter suddenly gets damaged and crashes into the streets below for seemingly no reason.

Batman has to figure what happened, and it’s here where we see the new Detective Mode feature. Batman heads to where the helicopter crashes, and slowly walks around the crime scene so the Bat Computer can evaluate things. Once you’ve gotten enough data, the computer can creat a 3D simulation of the events that just unfolded, which you can then replay like a video while searching for evidence.

There’s not enough data yet, so Batman heads back up to the roof and processes more video. Upon playback of the scene, Batman sees that a bullet had struck the helicopter’s propeller. Batman follows the angle of the bullet to find a SWAT cop killed on a nearby roof. Did the cop do it? Upon one final inspection, you see that the cop was actually aiming at Batman earlier, and was killed by another sniper bullet. That same sniper bullet ricocheted off the wall and struck the helicopter.

Batman knows that only Deadshot can pull off something like this, and the analysis of the scene will lead you to where Deadshot fired the gun. 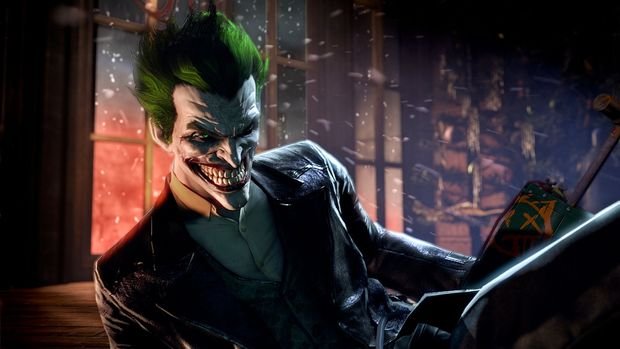 The new Batman and Joker voices

At the end of the demo, Batman rides an elevator up and finds Bane at the top floor waiting for our hero. Bane beats up Batman a little, then tosses him right at the feet of the Joker. There’s a row of explosive charges next to Joker, one of which is evidently being used to blackmail Bane. Joker then grabs one of the explosive charges and blows up a building near the one you all are in. You can see the building explode, and the force of the explosion blows open the windows in the room Batman and Joker are currently in.

This back-and-forth between the two iconic characters also showcased their new voices. As I revealed earlier, Roger Craig Smith, best known as Ezio Auditore from Assassin’s Creed, is Batman, while Troy Baker, best known as Booker in BioShock Infinite, is Joker. It makes sense that younger versions of these characters would be better suited by younger-sounding voices. But while I think Troy is perfect as Joker, I’m not quite feeling Roger as Batman here.

Former Batman voice actor Kevin Conroy is involved in the game somehow, but we’ve yet to learn where he’ll appear. 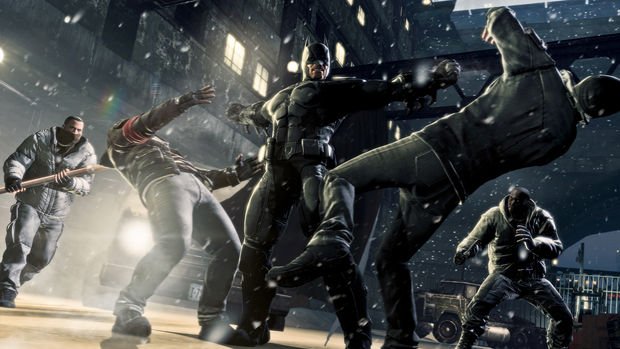 There are a bunch of new features and additions, but the core of it all still feels like the same Arkham game we’re used to. You’re a one-man fighting machine taking on criminals all while being hunted by assassins and the police.

I wonder what other villains we can expect. I love that someone like Deathstroke is involved, as it could offer up far more interesting boss fights. I want more of a brawler-type setup over the traditional boss encounters from the past. I hope WB Montreal tries to evolve things in this regard.