Sometimes, I like to wrap my fingers around the shaft, press a thumb on the end, and pretend that my penis is some sort of warm joystick, and that I am playing video games with it. When I’m not indulging in crude genital make-believe, however, I am gathering uninteresting, boring, and generally annoying video game non-news.

[This week’s non-news tipsters are: Topgeargorilla, Paco DG, Dr Dykes, DrHairyDwarf and Joe Burling. Love and kissies for them all]

Master Chief is the newest member of the Scissor Sisters 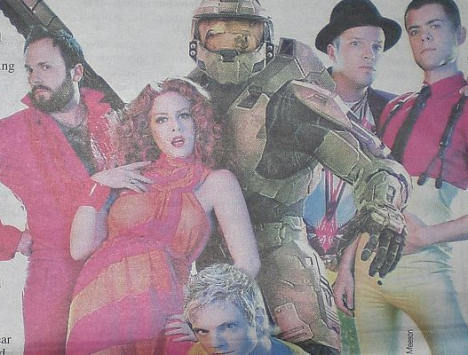 Okay, so he’s really not, but because the actual “news” report was so pointless and bland, I have decided in my wisdom to just make a better story up, and my story says that Master Chief has joined the Scissor Sisters to engage in camp, high pitched musical activity. That, and he wants to get a bonk on with Ana Matronic.

The actual article is from The Metro, the delightful little newpaper that ran the article blaming Animal Crossing for the corruption of our nation’s children. In it, they talk about video game music, and how top stars like the Scissor Sisters here have used their songs to promote games (the Scissor Sister track She’s My Man was used in a trailer for Halo Wars). The article was quite nice about our beloved industry, but so very boring.

Oh, and while we’re on the subject:

I’m playing Mario Strikers: You are not 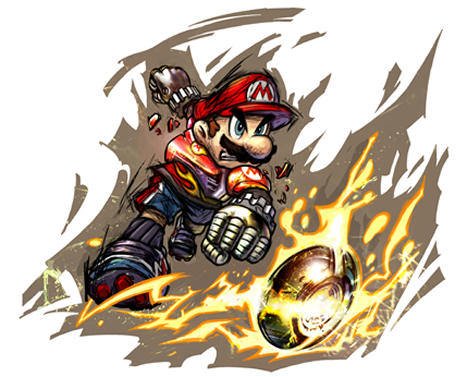 Just a quick note to let you know that Mario Strikers Charged Football is a lot of fun, which is something I am playing and you are not. The best part is, I barely even wanted it, but after seeing some Americans bitching and whining about how Europe was getting it before them, the sense of righteousness alone was worth £34.99. That’s right, I bought a video game merely to spite about three people in another country who I do not know.

Shut up, I need this. Super Paper Mario doesn’t look likely to hit Europe before November, have you any idea how disgusting it is to hear people complain because we got one game before you guys? Yes, having something that Penny Arcade‘s Tycho & Gabe want before they can get it is something that makes me feel like more of a real man.

Last week we talked about Kate, The Queen of Cloven Hooves playing World of Warcraft; this week we’re discussing a scene from the cleverly titled movie, Japanese Schoolgirls, in which a woman portraying a minor is playing video games, like the child she is before a sleazy gentleman walks in and, it’s safe to assume, statutory rapes the liquid Jesus out of her. 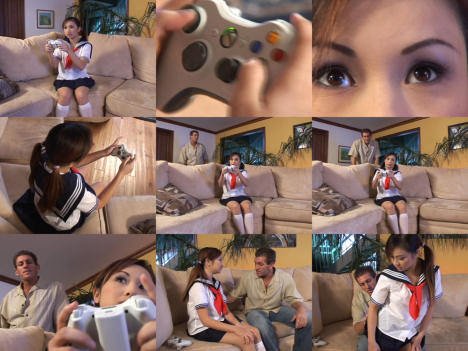 Still, it’s fantastic to see that gaming is finally being embraced by the media, right? Someone get Jack on the phone!

“Bad Dudes and its freaking hilarious and its bad dudes and not alot of people know about it and ITS BAD DUDES!!!1“

That is what one Dr. Dyke said of the above video. The above video that, so far, I have managed to watch about 53 seconds of. That … apparently … is the Bad Dudes movie. It … doesn’t even have anything to do with video games. It is, in fact, the worst thing in the history of the internet.

Dr. Dykes, this is a picture of a kitten:

If that kitten were a metaphor for life, you would fail at kitten. In fact, this would be a good time to debut my new Non-Newsround feature, the Fail of the week. No … the Kitten fail of the week. The crappiest, most worthless and mind numbing tips get given a metaphor for life in the shape of a juvenile feline to fail unquestionably. It’s like a special award, but for terrible, terrible people. Want to win at failing? Make me upset.

As upset as Dr. Dykes has made me. Why’d you have to send it in? What did I ever do to you? And the worst part of the whole thing is that the video promises “more to come”.

Turn your Dreamcast into a very rubbish Wii

Did you know that you could turn your Dreamcast into a Wii? An awful one? This guy here, who may very well be the greatest host of a Youtube video ever, shows us how. Using the fishing rod peripheral, it’s possible to simulate the actions of a Wii remote in Virtua Tennis. Don’t actually bother watching the video past the first five minutes, it’s just a bloke desperately swinging around a ludicrous lump of plastic while complaining about how much harder the game is with it. For maximum awesome, merely watch the triumphant introduction from a man who developed in a womb lined with win.
Am I sarcastically mocking him, or ironically revering him? The mystery continues.
And now, the moment you’ve all been waiting for. The reason you’ve suffered through this article with me (unless you skipped to the end, in which case you’re a filthy cheater and most likely a vile pervert). Ladies and gentlemen, strap yourselves in and be prepared, for it’s time to reveal, exclusively on Destructoid…

Beeeeeeeeeeeautiful.
Thanks again to everyone who sent in the non-news this week. I luff you all, even those who KITTEN FAIL!

Filed under... #Not what I had in mind#Offbeat