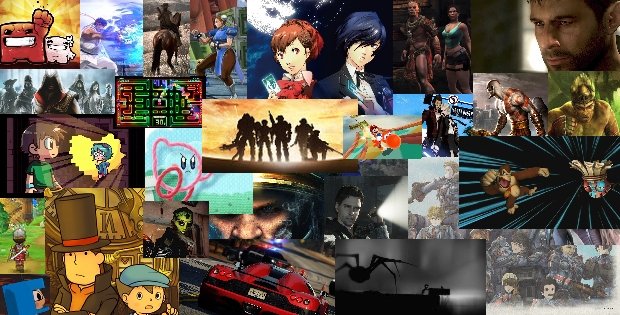 At the end of every year, people always look back over the year in videogames and wonder the same thing: Damn, I spent a lot of money. But they also tend to think to themselves: Was this the best year of gaming ever? While the answer to that is completely subjective, we here at Destructoid can say for certain that 2010 was, if not one of the best, one of the most varied and interesting in recent memory.

Just looking at the personal lists of each of our favorite games of the year proves that there were not only a lot of great games released in 2010, but each one was completely different from the next!

Despite the huge variance in all of our “best of” lists, five games emerged as the most universally adored by all of Destructoid’s editors. And these games became our five nominees for Destructoid Game of the Year 2010.

So what are they? STOP TYPING, CHAD, AND JUST GET TO IT! Okay, okay. Hit the jump for the official nominees.

This is all so exciting! 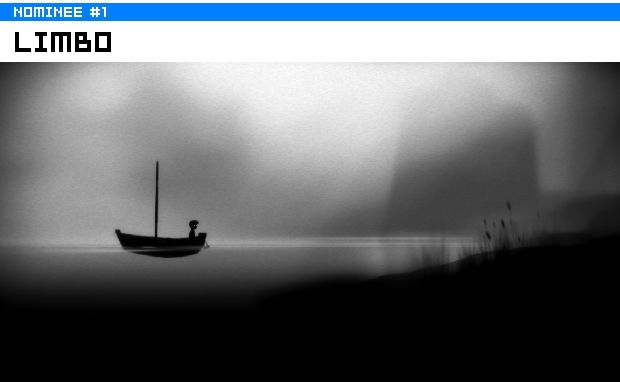 Limbo begins with a young boy waking up in the middle of the dark woods. From there, a dramatic cutscene doesn’t take over, nor does a tutorial begin. Once the boy wakes up, players just start to play, taking the mysterious main character on a gorgeous, haunting journey through a strange monochromatic world in search of the boy’s sister.

The wordless, stunning 2D platformer really is the definition of art. Not only is the game beautiful to look at (and listen to), like the best art, nothing is necessarily explained, leaving the entire experience open to interpretation.

Filled with wonderfully clever, challenging puzzles and a genuine sense of dread and sorrow, Limbo is unlike anything we have ever played. From the perfect opening seconds to the mysterious ending, Limbo proves that indie games can be just as successful as (if not more so than) their big-budget competition. 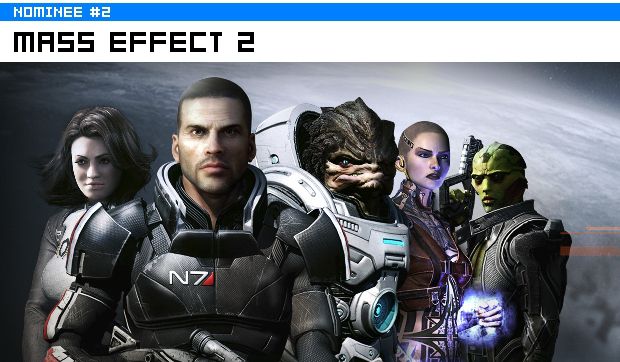 Speaking of big-budget competition, Mass Effect 2 — Bioware’s super-popular sequel to the original Mass Effect — is the very example of a huge-budget blockbuster. But, unlike some of the other massive game releases of the year, Mass Effect 2 did not disappoint. In fact, it only improved drastically on its already beloved predecessor.

Set in an entire universe (!), Mass Effect 2 follows Commander Shepard on an intergalactic journey to recruit a massive crew to put a stop to the evil Collectors, a mysterious alien species that is kidnapping humans.

Although the RPG elements were toned down a bit from the first game (for the better, in our humble opinion), everything else in the game is bigger and better. The game is filled with incredibly memorable characters, interesting dialogue trees, an addictive shooting mechanic, and one of the best climaxes in recent videogame memory. 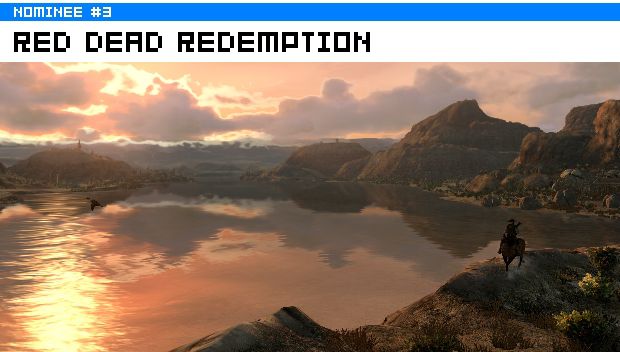 Admittedly, most open-world games released by Rockstar are hyped beyond comprehension and end in a slight tinge of disappointment. They are never terrible games by any means, but after driving your hundredth car through another urban city and shooting countless thugs and prostitutes, things can start to feel a little stale.

Red Dead Redemption was a much-needed fresh take on the open-world genre. While the gameplay mechanics remain primarily the same when compared to other games of its type, Red Dead is set in the vast, unique landscape of the American Old West, centering around maybe the best videogame character of the year, John Marston.

The game is great, featuring a huge array of awesome characters, exciting action, and unbelievably gorgeous environments (those sunsets!). But the thing that sets Red Dead Redemption apart — and makes it a confident contender for our Game of the Year — is the game’s brilliant, surprising epilogue.

I would hate to ruin it here, but let’s just say once you think the game is over, it really isn’t. The conclusion of Red Dead Redemption is powerful and moving, and ultimately the perfect way to end a fascinating, refreshingly original game. 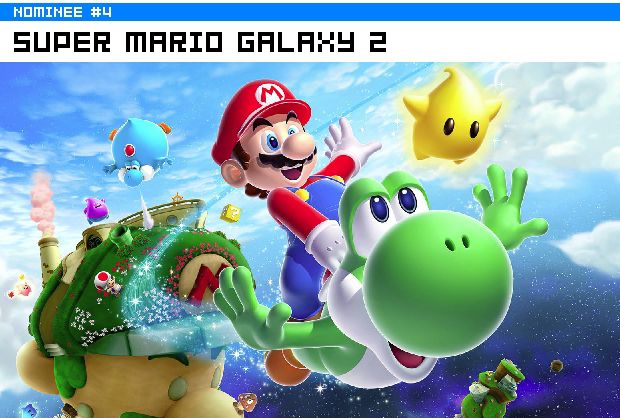 3D platformers don’t get much better than Super Mario Galaxy 2. To be perfectly honest — and this is a universal opinion around Destructoid — it may be the greatest 3D platformer of all time.

Following the already genius Super Mario Galaxy was hard enough, but Galaxy 2 somehow managed to improve on the first game in every way. More variety in the gameplay; more memorable power-ups; an even grander musical score; and tighter level design.

Oooooh, that level design. No other levels this year left us feeling more exhilarated and impressed than Super Mario Galaxy 2’s gloriously varied stages. When they weren’t plastering huge smiles on our faces, they were dropping our jaws to the floor.

Super Mario Galaxy 2 is a master class in game design and arguably the best game ever released on the Wii. 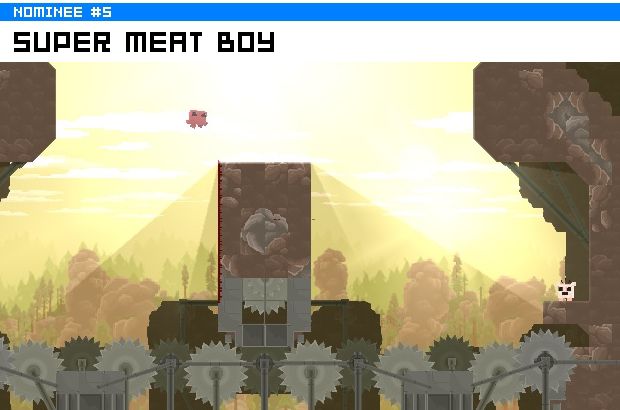 Yes, Super Meat Boy is ridiculously challenging. And, yes, you squeeze down on the controller so hard when playing that it physically hurts your hand. We all know this and have talked about it numerous times on Destructoid.

But it is also worth mentioning that the game is absolutely genius.

The perfectly controlled gameplay and flawless level design is quality enough to make this game one of our favorites of the year, but the many references to old retro games — from the opening level cutscenes to the various nostalgic art styles that fill the game’s warp zones (WAAAAARP ZOOOOONE!) — really push the game over the edge.

Throw in the fact that Super Meat Boy features a giant selection of playable characters from other fellow indie titles — each controlling completely differently — and you have quite the little masterpiece on your (sore) hands.

This and Limbo (two out of our only five finalists) prove that downloadable indie titles are giving all other games a serious creative run for their money.

And that couldn’t make us happier.

So, there you have it: our nominees for Destructoid Game of the Year 2010.

Now it’s time to pick a team! Are you on Team Mario, Team Marston, Team Meat, Team Shepard, or Team … er … Mysterious Boy Who Is Looking For His Sister? Hit the comments and let us know!

Do you think the five nominees are worthy? What are your favorite games of the year?

Please remember to check back this Friday, December 17, at 2 PM PST, for the reveal of Destructoid’s 2010 Game of the Year. It’s going to be a pretty major event. Tops will be off! You don’t want to miss it!

[Editor’s note: Since it was in alpha (and now beta!) for most of the year. Minecraft was not eligible for Game of the Year 2010. We here at Destructoid are obviously obsessed with the game, so wanted to include this friendly disclaimer.]

Although these five games received the most votes from our editors, there were many other games that were in the running. This was a pretty stellar year in videogames, and a handful of our other favorite games of the year were very close to making it into the finals.

For the curious, here is a list of our Game of the Year runner-ups (also in alphabetical order):