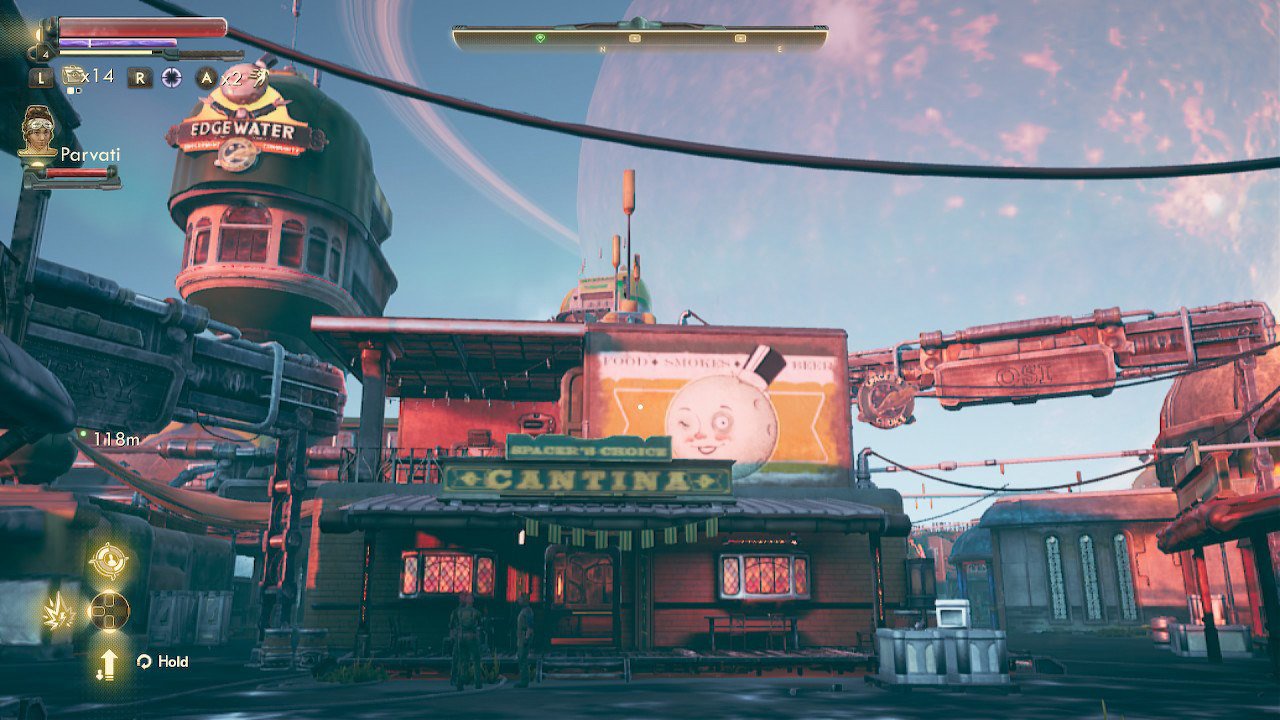 Come in with realistic expectations and you’ll be happy

Playing The Outer Worlds on Nintendo Switch is sorta like how you might imagine the PC version looks with most of its visual settings cranked way down or outright disabled. It’s not pretty – the textures, assets, and character and environmental details took a big hit – but hey, at least it runs okay.

Obsidian’s silver-tongued sci-fi RPG targets 30 frames per second, which it accomplishes well enough that the game’s real-time-with-slow-mo combat system doesn’t suffer too much. That said, you’re gonna see clear slowdown in busy environments, especially if you’re a habitual sprinter like me.

Officially, the Switch version runs at 720p in portable mode and 1080p docked, hence the need for noticeably stripped-back visuals. Were the trade-offs worth it? Should this port exist? Yes. Double yes.

Sights like this take some getting used to if you’ve played the PC or even console versions.

If you didn’t mind the Switch version of The Witcher 3 (for reference, it runs at 540p portable and up to 720p docked), you’ll be able to stomach The Outer Worlds just fine. It’s still recognizable. It’s still playable. You’ll still feel like you’re picking your poison during moral dilemmas and letting Parvati down.

By the time I explored Edgewater, the first settlement, my eyes had pretty much adjusted to the blurry ground and building textures, the latter of which bothered me more than the former. When The Outer Worlds leans into its colorful alien landscapes, it’s easier to overlook. When you’re running errands in developed, densely-packed interior areas like The Groundbreaker, every little eyesore stands out.

My biggest complaint – the setback that pulls me out of the role-playing experience more than anything else – is the loading. From the main menu, it can take almost a minute to get into the game. Fast-traveling, something I do a lot of in The Outer Worlds, can trigger 30-second loading screens.

I remember having a similar problem on Xbox One, but it’s more pronounced on a portable system.

Other than a companion ability audio cue that temporarily vanished and a jarring, oh-shit-I-gotta-load-right–this–second pop-up this one time when I entered a building in an open area, I didn’t encounter anything too out of the ordinary or technically concerning in my four hours of space adventures.

The Groundbreaker looks relatively okay in screenshots, but in motion, it can struggle a bit.

It’s worth mentioning that the physical edition for Switch has a day-one patch “that could be up to 6GB,” according to Obsidian. “This patch will optimize gameplay, provide additional hi-res textures, and include other fixes to provide the employees of Halcyon with the best gameplay experience.”

At the time of writing, my digital copy of the game takes up 13.7GB. With more and more beefy third-party Switch ports showing up in 2020, I think I’ll need to invest in higher-capacity storage soon.

One of the first things I looked for was a text-size option – something that was thankfully patched into the prior versions of The Outer Worlds. The scale runs from one to ten, and the biggest size is sufficient for a big-screen TV. I didn’t struggle with menu or dialog text on the handheld Switch screen, either.

The other thing I wanted to try, per Switch port tradition, was motion controls. There are three options:

Here’s a partial look at the control settings:

Another win for gyro fans, I’d say. (Also, wow, I made it this far without typing “Outer Wilds.”)

I’ve included a few other Switch screenshots, including one of my favorite Max quotes, in the gallery below. At its best, this port is pleasantly surprising. At its worse, the graphics are distracting.

For more thoughts on The Outer Worlds as a game you can spend $60 on, I’ll just say that it captures some (but not all) of the Fallout: New Vegas charm, and I’ll point you to Chris’ review of the PS4 version. At this point, I’d encourage Switch owners to wait for a discount unless they’re really feeling it.

Compromises had to be made, but I’m glad to see the Switch pick up new ports, flaws and all.