I must reform The Ninja Empire

Following several unfortunate delays, Taito’s retro remake The Ninja Saviors: Return of the Warriors will finally be arriving in North America on October 15, where it will be available for purchase on PS4 and Nintendo Switch.

The Ninja Saviors is the localised title for The Ninja Warriors: Once Again, the second remake to date of Taito’s 1987 arcade classic The Ninja Warriors. This revamped edition retains the audio-visual style of the original release, but includes a new engine, several new modes including two-player co-op and Time Attack, as well as two new unlockable characters, Raiden and Yaksha.

The Ninja Saviors will be available to download digitally for around $20, but fans after a physical release will be pleased to hear that such an item will be available, including a copy of the game, a poster, sticker sheet and territory-exclusive “character cards” of the newcomers, offered in apology for the North American delay. This limited day-one edition will retail for around $30. 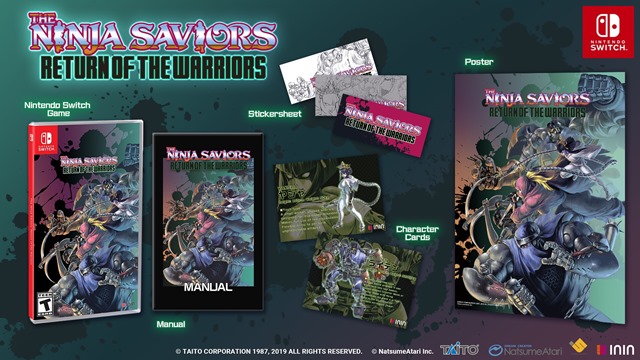 The Ninja Saviors: Return of the Warriors launches October 15 in North America on PS4 and Nintendo Switch. It is available now in Europe, Australia, Asia and Japan.

The Ninja Saviors: Return of the Warriors cuts its way to North America [Siliconera]