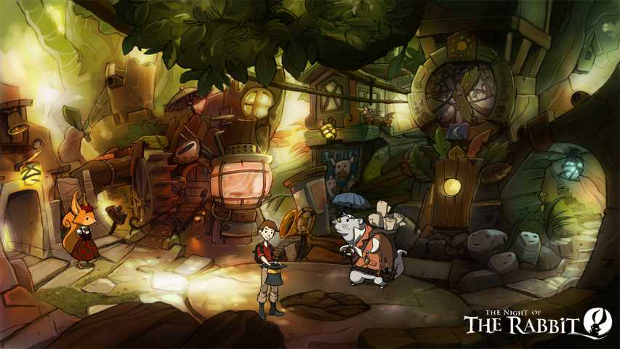 GOG.com recently posted a ruddy great big Q&A with The Night of the Rabbit lead designer Matt Kempke, where he revealed the inspiration behind Daedalic’s newest adventure game and his design philosophy.

One of the things that struck me about The Night of the Rabbit when I previewed it earlier this month was how it managed to capture the childlike whimsy of a kid’s imagination and the excitement of having one final adventure before the end of the summer holidays, but it wasn’t oversimplified, appealing to children and adults.

Kempke explained that finding that balance was extremely important. “[W]e tried to write a game which appeals to players of all ages. That way hopefully experienced players can enjoy it – but also their children, if they decide to sit down and play it on their own or together as a family. I think puzzles and gameplay are accessible when they feel natural and intuitive. For puzzles that means they need to fit well into the story and context and world without being ever impossible to solve – yet challenging enough to be fun.”

The Night of the Rabbit was written by Kempke himself, and its origins go back to when he had just finished working on his earlier indie adventure game, What Makes You Tick: A Stitch in Time. His brother had a few ideas surrounding the adventures of a young boy and a talking white rabbit who travel through a tree and go on fantastical journeys. He thought it would make for an interesting game, but at the time Kempke was beat from finishing his previous game.

But the premise had gotten its hooks in him. “In the next weeks slowly but surely my brother’s ideas started spinning around in my head and suddenly the boy and the rabbit had names: Jerry Hazelnut and the Marquis de Hoto.” Kempke explains, “And then I wrote down the introductory poem for the game.”

When he started thinking about where the pair of unlikely adventurers would travel to, he realised that he’d already created the perfect world. “A couple of years earlier I had written a fairy tale book that I never published. It was called “Eight Stories from Mousewood”. That world had characters I loved and that I really wanted to bring to life again. So many of the characters from Mousewood that you find in the game now are actually from these stories – and the stories themselves are also hidden in a wonderfully narrated version in the game as bonus content. If you run into the Woodsprite at night while playing the game, then just ask him about it. Maybe he’ll give you one.”

Kempke reveals that while his major influences are the classic Lucasarts adventure games, particularly The Curse of Monkey Island, he was also inspired by The Legend of Zelda: Majora’s Mask. “[I]t was the first game that had introduced me to the idea of different daytimes to explore and there was so much to collect –something that is more common outside the adventure game genre. In our game you can collect quite a lot of things: from audio stories to playing cards to magical dew drops and much more.”

The rest of the hefty Q&A is over at GOG.com, so go check it out. We’ll have a review of The Night of the Rabbit next week, so keep an eye out for that.