When Paradox Interactive CEO Fredrik Wester revealed the company’s plans to expand into cross-platform multiplayer experiences last week at the Paradox Convention, I was extremely interested to see what the Swedish publisher would be showcasing. One might even say excited.

After the trailer for Magicka: Wizards of the Square Tablet faded to black, my enthusiasm was greatly diminished. To my eyes it looked like a stripped-down, 2D Magicka for platforms I rarely care about. The humor was still there, at least in the video, but I was less sure about everything else.

Half an hour with the game, played co-operatively with four other journalists, and my fears were significantly reduced. This is definitely still Magicka, and it has the potential to be a bit of a riot.

The core Magicka experience of combining and experimenting with often highly destructive spells while in a four-player party has been left completely intact in this tablet spin-off. At first glance, it certainly doesn’t look very much like its predecessor, with the somewhat uninspired 2D cartoon aesthetic and lack of levels ripe for exploration, but it very quickly starts to feel exceedingly similar.

After running through the single-player tutorial, I quickly got to grips with the touch controls, and actually found firing off spells and combining them to create new, more potent, arcane weapons of mass destruction to actually be slightly more intuitive than in the original game.

The seven base spells are one short of the PC forebear. The arcane spell is no longer present, but has actually just been combined with the life spell. So, if you want to annihilate a foe with a toasty beam of fire, you select the fire spell, then the life spell, and voilà — you’ve melted a monster. 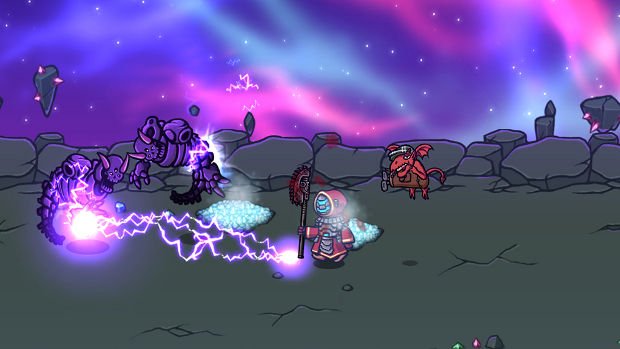 All of these spells are presented as large, obvious buttons at the bottom of the screen. Pressing one adds that spell to your wizard’s spell combo, shown just above the character, and by touching anywhere else on the screen the spell is activated. And by activated I mean that it usually kills something. Frequently a friend. Select the fire and earth spells, and both of those icons will appear above your character, so you always know what’s in your immediate loadout.

Upon completing a level, the psychopathic wizards are awarded coins which can in turn be spent on items such as new staffs, robes, scrolls, and even familiars. The item descriptions are appropriately amusing and irreverent, and sometimes lampoon other games. I couldn’t help but want the grisly chainsaw staff wielded by hairy men who like to kill things. Gears of War could probably do with an injection of magic.

With my new double staff (sticking two staffs together is the tried-and-tested method for making things more awesome) and weird-looking froggy familiar, I joined my three companions in a co-op level. All levels can be played with chums and feature two difficulty levels. When asked which difficulty we’d like to choose, I immediately said “hard.” I mean, we play games for a living, surely we could handle it. 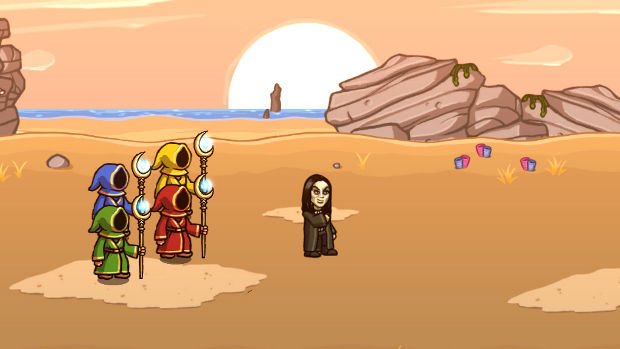 We were beset by all manner of beasties the moment we started, and within 10 seconds, I was a red smear on the ground. Freshly resurrected by another player, I opted for a more cautious approach. Another writer decided to act as the healer, and we breathed a collective sigh of relief. 15 seconds later our healer was dead because I threw a flaming rock at his face.

Not only has team-killing returned in Wizards of the Square Tablet, if anything it’s going to be a lot more common. For every monster slain, there was a sheepish apology as yet another wizard was frozen, set on fire, electrocuted, or pelted with rocks by an ally. The small, linear areas mean that there will rarely be a time when players aren’t getting in each other’s way. This is very much a feature, rather than poor level design.

That said, the three levels I played through (including the tutorial) were rather lackluster. They were just straight, unobstructed paths with nothing in front or behind other than more enemies. These wandering, ravenous, blood-thirsty horrors are rather splendid, though, and do go a long way to make up for the slightly ho-hum areas. They all look a bit dorky and kooky, until they open their jaws and devour a hapless wizard or squash them under a large boot. Likewise, the wizards themselves have some great designs once some of the more outrageous robes have been unlocked. I’m still not sold on the overall look, but within it I found plenty to like. 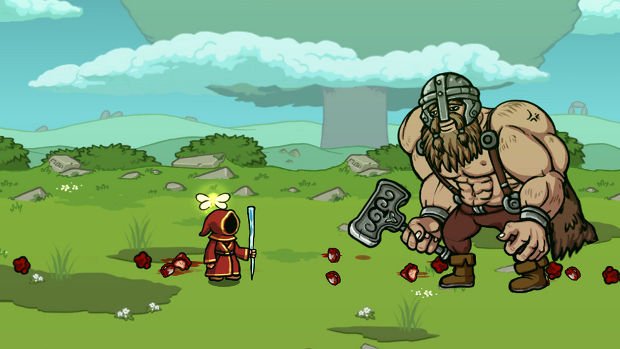 Getting from one level to another requires traversing the overworld map. Here I saw more branching paths, though it seemed more like a pretense of openness, as it’s still quite linear in practice. However, the levels (represented as wee nodes) can be repeated to try and get higher scores, play with more people, or attempt a different difficulty. These friend-slaying, monster-exploding, staff-waving adventures are about 5-10 minutes long, and so don’t present a real time-sink. This is definitely something to be played with on the bus, or, indeed, between summoning demons or stirring cauldrons.

Magicka: Wizards of the Square Tablet will be maintained, unfortunately, through micro-transactions. It seems to be the sad truth of many tablet games that folk simply don’t see the point in paying traditional prices for a title they may only play between what are perceived as more robust experiences. It looks like you’ll be able to spend real cash to get currency to spend in the shop, so hopefully the micro-transactions will merely exist to speed up the process of kitting one’s wizard out in all the latest fashions. No word yet on how the cost of such things, though.

The latest Magicka romp releases in a few weeks, so keep your eyes open for the release date — no doubt we’ll have it soon. I was pleasantly surprised by my hands-on time with Wizards of the Square Tablet, and while I don’t see it gripping people in the same way that the original has, I suspect that it will be a welcome experience in Magicka fans’ tablet library.