During the EA Summer showcase, the newest entry to the Harry Potter videogame series was available to check out just before it becomes available this Tuesday. In this final chapter of the story, you must save the world and your friends from the evil Lord Voldemort and his followers otherwise know as the Death Eaters. Your job is also to destroy the remaining Horcruxes in order to remove power from Voldemort.

The game plays like a third-person shooter and is somewhat similar to Gears of War in terms of the play style. You will run from cover-to-cover shooting the Death Eaters with your wand in order to progress through the levels. For a Harry Potter game, this title looks pretty gritty. Sure there is no blood in it but the color pallets used in the backgrounds and in the character designs give it a dark ambiance to the overall feel. 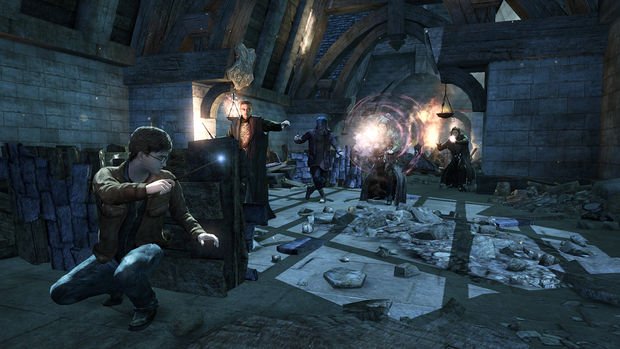 There are quite a few other similarities between this game and Gears of War. For example, in Harry Potter, you lead a team of grizzled high school veterans against hordes of Death Eaters. In Gears, you lead a team of grizzly military types against evil aliens. Your lead character in Harry Potter has a scar on his face as does Marcus Phoenix of Gears. They both like making big explosions and running around with their friends blowing stuff up too.

The team says that they have addressed what the fans were asking for from the previous version of Deathly Hallows, such as being able to play as other characters in the story. During the demonstration,  Professor McGonagall was used to fight off one of the giant bosses in the game. They also simplified the control scheme. Each spell in Harry’s arsenal is mapped to a button on the controller and you simply pull the R trigger on the controller to cast whichever spell is equipped. 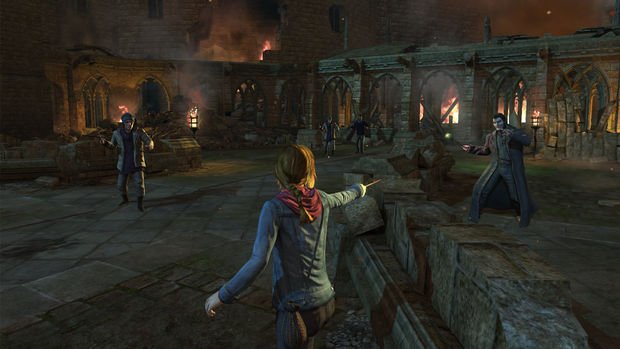 There is quite a bit of strategy in the way that you will have to defeat your enemies. Certain spells are just for defeating your enemy’s shields and other spells are for dealing damage. You will have to find the right method of knowing which spell is going to be needed to take out the bad guys. Later in the game, you will also get the Apparate spell which will allow Harry to teleport to nearby cover in case of a surprise attack which seemed to happen often.

This game is a great starting point for kids whose parents will not let them have the Gears experience or if they are just Harry Potter fans in general. Either way, it is definitely a game that can be enjoyed by all. If you really want to spoil this game, there is a movie that will be coming out on Friday based on the exact same story. You should watch it. It’s a big deal, apparently.