For Windows 8 phones, tablet, and PCs

Halo: Spartan Assault is the next project from 343 Industries, a top-down twin stick shooter for Windows 8 powered phones, tablets, and PCs including the Surface. It’s an exclusive to Windows 8 devices designed for touch controls but it will support mouse and keyboard controls plus the wired Xbox 360 controller (via a title update post release).

Yes, it’s obviously an attempt by Microsoft to drive more Windows 8 sales using the Halo branding, but I don’t think even a Halo game can pull that off. That’s not to say Spartan Assault isn’t fun. In fact, I really enjoyed playing the game on both a Windows 8 phone and tablet.

The premise of Spartan Assault sees you playing as either Commander Sarah Palmer or Spartan Davis as they relive historical battles against the Covenant aboard the UNSC Infinity. The game is set between the events of Halo 3 and Halo 4, and also shows Palmer’s transition from an ODST to Spartan. Sound familiar? Yeah, the Halo: Initiation mini-series from Dark Horse is tied into this whole adventure.

Gameplay-wise, imagine a game like Robotron, set within the same sandbox world you’re accustomed to in a Halo game. You’re free to take on battles however you like, pick up weapons from fallen foes, and drive any vehicle you can get. 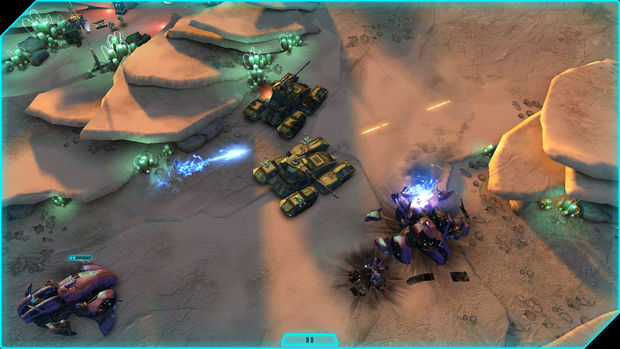 The controls are pretty damn smooth via touch screens. You have a large space for where you can place your thumbs in order to move, aim, and fire. It’s really easy to pick up and play as you move and shoot at whatever comes at you. You can select different loadouts before jumping into one of the 25 missions — everything from choosing your weapons, armor abilities, boosters, and even Skull modifiers. Plus, there will be new weapons and abilities featured here, and some returning old favorites like dual-wieldable SMGs.

While running and shooting are pretty fluid, the game does suffer a little bit from the limitations of the touch screen interface. Using grenades, swapping or picking up weapons, using armor abilities, firing your vehicle’s weapon and so on can be activated by pressing specific locations on the screen. It might become second nature over time, but starting off you’ll have to look away from the action to press the corresponding buttons. Not a deal breaker, just something you should be aware of. This isn’t a problem with the mouse and keyboard controls, of course. 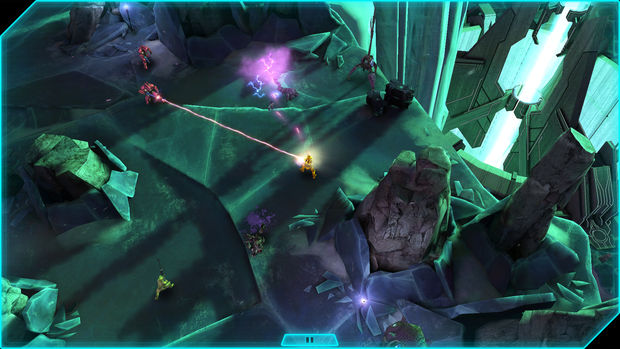 Visually the game is stunning for mobile, and there was a ton of detail presented as I went through the demo level. The game even has cinematics and full-on voice acting, plus a musical score all done by Skywalker Sound to boot.

You can expect a bunch of tie-ins to Halo 4 and “other Halo projects” in the future too. There are rewards, experience points, and unlockables that can be all fed into your Spartan in Halo 4’s multiplayer. There’s also 40 in-game Achievements, leaderboards, plus daily and weekly challenges. Lastly, there’s going to be cross-save features across the different platforms similar to Skulls of the Shogun, and microtransactions of some sort as well.

So yeah, I liked what I played. I especially loved how we’re given things we’d never get in the standard Halo experience. A drivable Scorpion featuring two barrels and a rocket launcher that can send out up to six missiles at once? Hell yeah! But I’m far from the point of ditching my iPhone or “upgrading” to Windows 8 just for Spartan Assault. Those of you who do own Windows 8 devices will have some fun with this one for sure. For the rest of you, well, I wouldn’t be surprised if this eventually gets released on Xbox Live Arcade down the line.