Words cannot express how much I want Catherine right now. Famitsu, the world’s most prematurely-scanned game rag, has splattered a saucy new trailer and a sack full of screens onto the internet, and I’ll be damned if this game doesn’t look pretty f*cking awesome.

Developed by the team behind Persona 3 and 4 and Shin Megami Tensei: Nocturne, the new action-adventure title skews – as promised – towards the adult range of the spectrum, oozing style, sexiness, Japanese rap, and…walking lambs that wear ties. It might not be work-safe, though, so buffer with caution. Suffice it to say that it goes far beyond suggestive pizza-eating.

In the space of a single night Atlus has managed to erect this game all the way to the top of my most-wanted list. Is it on yours yet?

Check below for some more details teased out of of the Famitsu preview. 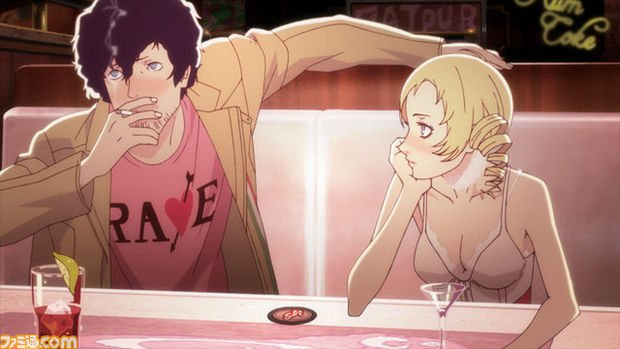 As mentioned last night, the game stars Vincent, a 32-year-old bachelor who’s become something of a “herbivore man” (a Japanese slang term for men who’ve given up on finding love), at least until he meets the 22-year-old Catherine, who’s described as having a “charming face” and “well-rounded proportions”.

Soon after, Vincent starts having nightmares, wherein he, stripped down to his boxers and somehow equipped with ram’s horns, must climb an endless staircase to wake up, lest he end up slaughtered, like the other “lambs”, who happen to be talking sheep that walk on two legs (and occasionally wear neckties).

As might be expected, there are some ties between the dream world (where the in-game action should happen) and the real world, as a news broadcast in the trailer reports a young man’s dying in his sleep, and rumors that if one falls while experiencing a certain nightmare, one dies in real life. 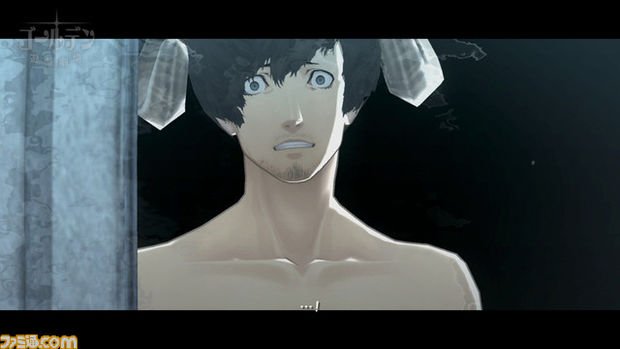 Overall Famitsu’s coverage was a bit light on information about Catherine‘s actual mechanics, but had some intriguing quotes from the staffers working on the game:

Director/Producer Katsura Hashino said that he and the team “wanted to try something different” for their first HD outing, before going with a “mainline” RPG, and that the results they got were “quite interesting”. They’re aiming to provide a deep experience with lots of play for gamers to get into, while feeling new and interesting.

Character Designer/Art Director Shigenori Soejima said that Catherine provided the opportunity for the team to try things they wouldn’t otherwise dare, as well as enabling them to do things that are definitely more adult-oriented, with more “daring and audacious” visuals as well as some “shocking” scenes.

The game is about 80% complete, and is scheduled for a “Winter 2010” release on the PlayStation 3 and Xbox 360. The official site should open up on August 23, and more information might come out as the Tokyo Game Show rolls around.