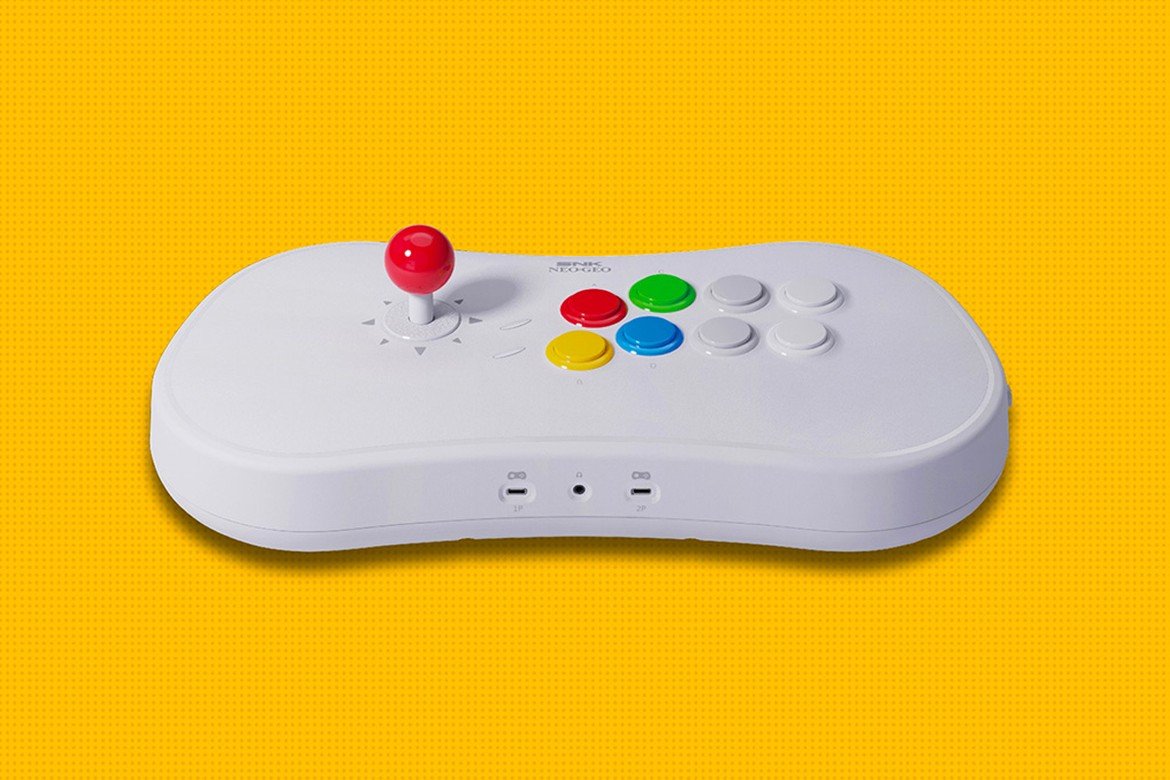 Part of its functionality is predicated on the Neogeo Mini

SNK is an interesting company. For years they dominated the arcade and home fighting game scene, pumping out IP after successful IP. Then all of a sudden, Konami style, they kind of just stopped doing it.

Now the publisher is back in business and is trying to re-integrate into the gaming scene in a big way: one of those initiatives is the Neogeo Arcade Stick Pro.

So what is it?

The Neogeo Arcade Stick Pro doubles as an actual arcade stick for use on the PC and Neogeo Mini platforms, as well as a mini-console (of sorts) of its own with 20 built-in games. It’s 16 inches wide and 4.8 inches high, so it’s formidable enough as a stick but not too hefty. Its ports include a dedicated headphone jack, HDMI and two slots for USB Type-C with one port for Type-A. If you have two Arcade Stick Pros, you can jack them into each other for two-player versus.

A toggle allows you to swap between stick mode and console mode, and the 6.5 inch cord length is a decent amount of slack. I know a lot of people are okay with it, but I’m always miffed when a piece of hardware doesn’t come with every component out of the box. In this case you’ll need a power adapter for USB-C if you don’t have a USB slot handy, as well as an HDMI cable.

Given that it’s not a big-time micro-console, its options are scant. There’s language settings, rudimentary screen resolution sizes (original aspect ratio or stretched), options for smooth visuals or pixel scaling, three scan line choices (transverse, longitudinal, 45 degrees), headset volume and the chance to unlock the firmware via USB. Although the included games are old, they look great even blown up due to SNK’s tireless talent for pixel art.

What I like most about the stick is how authentic the aesthetic feels from afar and in action. SNK did a great job of re-creating the Neogeo gamepad in stick form, even down to the iconic arrows around the actual stick and the color of the buttons. Although it doesn’t fully open up like other modern arcade sticks (which showcase the innards), it does have a small compartment underneath to store a few cables. The stick is very clicky (which might annoy some of you), but there’s plenty of room to rest your palm on the big base.

Pressing the options button on the side (next to start and select) brings up a save/load and controller configuration menu. The ability to customize the button layout is a nice touch if you’re particularly finicky, and saving your progress during a good story run when you have an errand calling is the least a built-in game station can do.

Note that all 20 included titles are fighting games: this is important. SNK has a rich tapestry of projects to draw upon, but you literally need to be an arcade fighter enthusiast here to really get the most out of the Arcade Stick Pro. You can read the full list above, and speaking as an FGC enthusiast, major highlights include the pair of Fatal Fury games, Garou (which is already available on a truck ton of platforms), Last Blade 2 and several Samurai Shodown entries. Again, a lot of the games don’t have fully-fleshed-out modes and are literally just arcade fighters.

Nearly all of them are good, though. King Of Fighters ’98 is one of the most celebrated in the series and Fatal Fury 3 is one of my go-tos when I need to unwind from the KOF scene. Kizuna Encounter is a real out-there (and very fast) fighter that hasn’t seen that many modern re-releases, and helped popularize the tag-team format a few years before the original Marvel vs. Capcom.

$129.99 is a chunk of change, so you better be prepared to actually use it as an actual stick and have an affinity for at least some of those titles going in. SNK is aiming for a collector’s feel with the whole thing though, and I think that’s where it hits its mark.