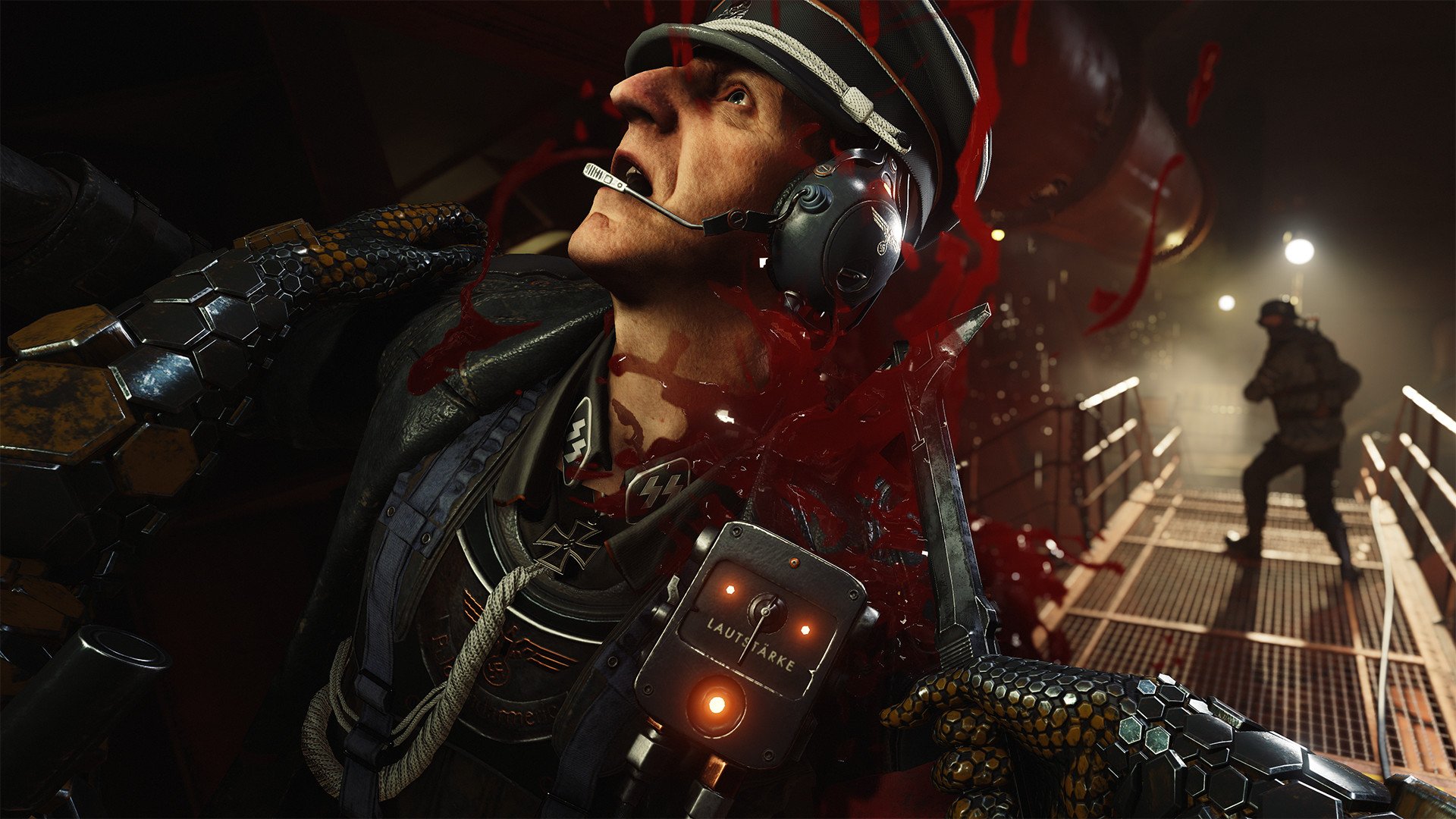 I slept on Wolfenstein: The New Order. There were assurances from friends it was the best shooter of the year. That it was better than whatever came to mind when you thought about someone dragging the classic series back, again, after the forgettable 2009 entry.

I slept until this year’s announcement of its sequel, Wolfenstein II: The New Colossus, which debuted with a live-action Technicolor short featuring a murderous RoboCop-style mech and a girl barking orders at it in German. The actual game, meanwhile, filled with milkshake-drinking Nazis, papering over cliche Americana with the menacing bright red Nazi flags. It’s an interesting look at how different, and how similar, a German-occupied America might’ve looked at the time.

Wolfenstein II opens with a compromised William “B.J.” Blazkowicz. He wakes from a coma, unable to walk, a humbling moment for the erstwhile killing machine who meth-addled Nazis whisper about like a spooky story. For the entire first level BJ is restrained to a creaky wheelchair, pointing a machine gun with one hand and scooting along with the other. Staircases are your toughest enemy to start, as BJ has to use the ship’s machinery as makeshift dumbwaiters to change elevation as the resistance ship he’s sailing on has been discovered and boarded by the Nazis. It’s not quite Metal Gear Solid: The Phantom Pain levels of drawn-out infirmity, but it does reaffirm that there is more to this game than excellent first-person shooting.

It makes sense from the pedigree. Developer MachineGames is comprised of ex-Starbreeze folks known for cult-classic shooters The Chronicles of Riddick: Escape from Butcher Bay and The Darkness, the latter of which particularly receives high praise for its story. And from what I’ve played, Wolfenstein II delights on that end. In the early goings Set Roth, the brilliant Jewish scientist BJ rescued from a labor camp in the previous game, explains that wheelchair-bound BJ will have “difficulties to urinate, use your schmeckel.” The tense Nazi-milkshake scene, which comes from a later level, culminates in BJ meeting a well-acted alien truther whose two-generation probe into Roswell, Area 51, et al abed BJ on his Nazi-killing (I’m not saying it’s space aliens, he says, while repeatedly saying this all has something to do with space aliens).

The lead up to that moment is great as well, a gunfire-free walk filled with world-flavor and conversations to eavesdrop on during a huge German parade down a quintessential Main St., USA. A German soldier excoriating two hooded Klansmen for their poor German skills. A woman trying to screw a very willing German officer (“I’m so happy the Germans brought some culture to this country”). And it isn’t just people looking out for themselves. Two Americans in line at the cinema talk glowingly about how Leni Riefenstahl’s famous German propaganda films have cleaned up the “depraved cinema” of Hollywood. Citizens remark on the Fuhrer’s good painting skills. Resistance movements are small and covert for a reason. The war is long over and plenty of people just want to carry on with their lives, even if it means tossing a “danke schön” the kommandant‘s way.

Crawling through tunnels from the aforementioned alien truther’s basement towards Area 52 to set off a nuke in Nazi central was a bit more rough an experience. Thrown into late game combat with unfamiliar enemies and everything else (especially having missed the prior game) and lacking the casual at-home free time to really mess with stealth, I died a hell of a lot on normal difficulty, cursing long load times and some ill-timed auto-saves in what was a bit of a finicky early build (it crashed outright on me a couple times). The metallic gray underground facility and train ride between facilities, shorn of context and pacing, was a bit of a slog, and much less interesting to me than the opening and aforementioned walkabout in Nazi America. On the other hand, grabbing a heavy’s giant laser gun and incinerating fools was cathartic, and I expect that segment won’t feel so jarring in the context of a full playthrough.

This is a timely year for Nazi-killing and Wolfenstein II seems like it’ll offer that in spades, coupled with a well-thought-out alternative history filled with over-the-top characters. A RoboCop style of ultraviolent satire. You’ve got three months to play The New Order if you haven’t already and want to go in fully-apprised.