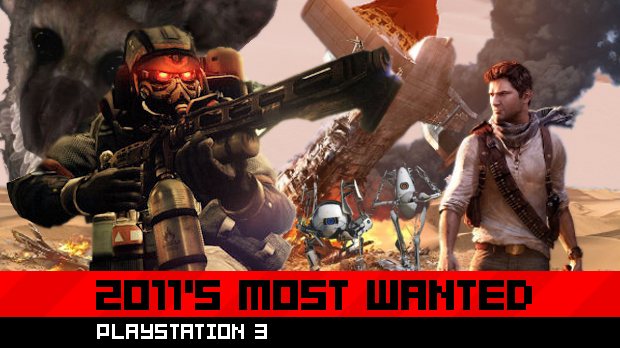 2010 is almost over, and that means we can start looking forward to another twelve months of videogame delays! Yesterday we told you about all the Xbox 360 games we’re excited for, and now it’s time to take a look at what the PS3 has got cooking for us!

So join Samit Sarkar and myself as we discuss the hottest upcoming games on PlayStation 3. Be sure to check back with Destructoid through the rest of the week as we look at the PC, Wii, 3DS, DS and PSP!

Speaking as possibly the only Killzone fan on the Destructoid staff (not that others hate it; we’re just a damn eclectic bunch), I’d be a terrible human being if I didn’t give Killzone 3 its required nod. Killzone 2 was easily my most played shooter of 2009, and I expect the follow-up to steal just as many hours as the previous one did.

With a robust and improved multiplayer system, more locations, and the inclusion of JETPACKS, Killzone 3 is looking set to be one of the hottest titles of the year without a doubt. It’s going to kill your face off, and that’s awesome!

I always respected what inXile did with A Bard’s Tale, and I already respect what they’re attempting with Hunted — a hack-n’-slash RPG with a focus on co-op and a cover-based shooting system. Hypingly referred to as “Gears meets WoW,” this dark fantasy game looks like it could be some serious fun, and it also has skeletons in it, which makes any game worth looking into.

Currently, inXile needs to tighten the movement controls and make it so characters don’t feel like they’re forklift trucks. It also wouldn’t hurt to beef up the melee combat, as the shooting far outclasses it, according to the last build. With those things ironed out, this could be quite the sleeper hit. Keep an eye on it!

If you didn’t expect some Warriors love in these articles, then you don’t know me very well. Koei’s Dynasty Warriors 7 looks set to be the best entry yet, with an expanded story, more characters than ever before, and a return to the charge-based combo system. Add 3D and PlayStation Move support, and you’ve got a game that Omega Force seems to be putting some real effort into.

The Warriors games have cult appeal, and most of you reading don’t get it. That’s fine, I don’t expect you to. But let it be known that there’s a dedicated percentage of gamers who are stoked for DW7, and I’m one of them. It’s going to be a hot’un.

I’ve been a fan of Warhammer 40,000‘s world for many years, and I’ve always had a soft spot for the videogames. I even loved Fire Warrior, despite most people declaring it a piece of crap. Space Marine may have a name that almost seems to lampoon the game industry, but it looks fantastic. Everything I’ve seen so far indicates that this will be a great action game that could surprise us.

Of course, until we see more than hype-riddled trailers, we’ll have to be careful in proclaiming its greatness, but at this point in time, it’s definitely a game I’m eager to get my hands on. Ballsy bastards and big bolters — you can’t say fairer than that.

I’ll admit that my list doesn’t boast a huge amount of exclusives. Sorry, but as cool as I’m sure LittleBigPlanet 2 and inFamous 2 will be, there are just better-looking multiplatform games that I feel I need to talk about. El Shaddai: Ascension of the Metatron is one of them.

El Shaddai is based on the Book of Enoch, an obscure Biblical text, and it features an intense fighting system as well as 2D platforming sections. It also looks incredibly stylish. I have a really good feeling about this one, and I’m far from the only one. I would advise everybody to keep it on their radar!

Jim agrees with Braid creator Jonathan Blow’s assessment of Sony’s PlayStation Network titles — that they’re more “artful or experimental” than the games on Microsoft’s Xbox Live Arcade — and two games that offer solid evidence for that argument are thatgamecompany’s flOw and Flower. The latter was my favorite downloadable game of 2009, and the fact that thatgamecompany and Sony seem to deliberately be keeping Journey shrouded in mystery is only heightening my excitement for it.

The game’s stark yet strangely beautiful desert landscape, its intriguing online cooperative play — purposely designed without voice chat or matchmaking — and its promise of an emotional, spiritual journey, have piqued my interest like few other PlayStation 3 games scheduled for release next year. Expect Journey to be at the vanguard of the continued rise in prominence of downloadable games.

Yes, I know I put The Last Guardian on last year’s list, but that was back when as far as anyone knew, the game was due out in 2010. Now it’s set for a “holiday 2011” launch, and frankly, if it misses that release date, it’ll be in danger of becoming the next Gran Turismo 5.

Even so, I’m willing to wait as long as it takes for Team Ico to produce the final game in a series that contains two of the PlayStation 2’s most acclaimed adventures, Ico and Shadow of the Colossus. The relationship between the boy and the griffin-like creature in this game will surely tug on the heartstrings, even if the story’s ending doesn’t turn out to be as sad as those of the prior two games. I can’t wait to find out how it all goes down.

You might think that the presence of MLB 11 The Show on this list is just a token inclusion on my part, since I’m the sports guy at Destructoid. But Sony San Diego isn’t only making the usual incremental improvements to their stellar MLB The Show series; for the first time, they’re implementing analog-stick controls for hitting, pitching, and fielding, and I’m eager to find out if they’re better than the button controls that the franchise has used thus far. And a brand-new co-op mode promises to have you screaming at your buddies, whether on the couch or over the Internet.

The “usual incremental updates” sound great, too: a revamp of the goals setup in Road to the Show; anatomically accurate bodies; team-specific camera angles; rain-slicked fields; and — let’s hope the developers are serious this time — much-improved online play. I don’t think MLB 11’s online user base will be ready to tangle with my 2011 New York Yankees.

Every little bit of Portal 2-related content that I’ve seen has made me squee and salivate like a hungry child who has just had his favorite food — cake — placed in front of him. This time around, Aperture Science has a whole host of new puzzle-solving technologies to mess around with, and in conjunction with Valve’s trademark charm and wit (platforms that propel you upward are called “Aerial Faith Plates”; Stephen Merchant voices your sidekick, Wheatley; and oh yeah, GLaDOS is back), they’ll have you laughing even as your brain is straining to figure out each room.

Then again, you’ll now have direct help from a friend: Portal 2 offers a separate co-op campaign that’s played with two of the cutest widdle robots I’ve ever seen. Hell, there’s even a “hug” command! And don’t forget Gabe Newell’s proclamation at Sony’s E3 2010 press conference that Portal 2 on PS3 will be “the best version on any console,” thanks to its Steamworks support.

Come on… you didn’t seriously think that we’d leave out this game, did you? (I mean, the header image of this article should’ve eased your fears.) Fret not: the only reason Uncharted 3 is all the way down here is because I listed my games alphabetically. It is, by far, the PS3 game that I am the most excited about in 2011. I have no idea how Naughty Dog will top one of the 25 best games of the past decade, or if they’ll even be able to do so. But if the fiery first footage is any indication, the studio is well on its way.

Nathan Drake has traversed a staggering variety of landscapes throughout his fortune-hunting career: mountainside villages, moist jungles, tropical islands, underground caves, and ruined towns, to name a few. In Drake’s Deception, he’ll be adding desolate deserts to that list, as he follows the trail of legendary British Army officer T.E. Lawrence (aka Lawrence of Arabia). Drake’s looking for another mythical lost city; this time, it’s Iram, the fabled “Atlantis of the Sands,” located somewhere in the Arabian Peninsula. Thankfully, his old friend/father figure/mentor Sully is back in action for what’s sure to be another cinematic, gorgeous, high-octane adventure. November seems so far away …

Additional staff picks for the PlayStation 3:

This is just a selection of our most anticipated games for the PlayStation 3. There are a ton of great games coming out next year, and we want to hear from you what YOUR most wanted PS3 game of 2011 is (use this giant list to help you figure out what’s coming out). Leave a comment telling us the games you want the most, and we’ll tally up your votes to reveal on Monday what the most anticipated games of 2011 are from the Destructoid community.