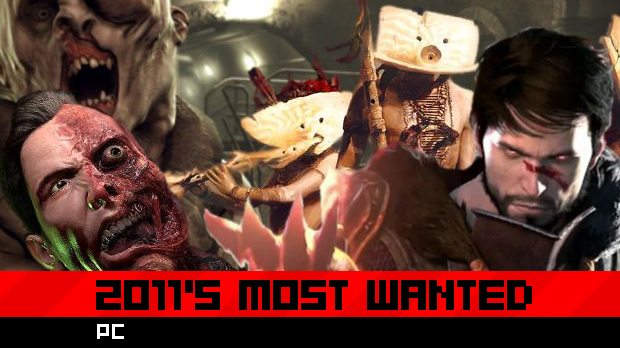 As a PC gamer, there’s a lot in 2011 to be excited about. On Monday, Hamza and Nick gave you their most anticipated 360 games. Yesterday had Jim and Samit telling you about what’s going to be hot on the PS3. Today, Jordan Devore and I bring you a list of the PC games we’re most excited about.

One thing you may notice about all our lists this year, particularly more so than in the past, is that there are simply fewer exclusive games across all platforms, and as such we have fewer exclusive games on our lists. Many of the games on this particular list will be coming out for console as well, and will be great purchases no matter what platform you get them for. However, they’re here on the PC list because we think that the PC versions will be either exceptionally well done, or the definitive experience.

Exclusive or not, there’s a lot of stuff releasing in the next year that you’ll want to keep your eye on. Hit the jump to find out what we’ll be waiting for.

I’ve been incredibly pumped about Guild Wars 2 ever since I got an hour-long demonstration back at PAX. Dynamic quests in a constantly-changing world, a legitimate story where your actions actually affect your character and his or her personal story, and a combat system that actually forces you to dodge attacks and maintain careful positioning make this an MMO to watch out for.

Based on what I’ve seen already, I’d happily pay a monthly fee for this game. The fact that there isn’t one makes Guild Wars 2 even more appealing.

My short hands-on with the game earlier this year was supposed to be a twenty-minute meeting, but I ended up playing for almost an hour. The only reason I stopped was because I was demoing the game on a small laptop, and the tiny portable laptop mouse started giving me hand cramps. Torchlight II may be bad news for people already suffering from arthritis or carpal tunnel, but it’ll be great news for gamers (and doctors who specialize in repetitive stress injuries).

Sadly, I ignored the original Dragon Age when it was first released — I played it for a few hours, and then got distracted by some other game. I finally made my way back to it this summer, and once I got into it, I obsessively played it for two weeks straight until I completed it. It now ranks as one of my top RPGs of all time.

I was nervous when I heard the tactical view would be missing from Dragon Age II, but after reading some interviews and talking to Joseph Leray, who went up to Canada to look at the game recently, I’m reassured. At this point, I’m pretty confident that the PC version of Dragon Age II will be a worthy successor to the original, and not just another lazy console port.

Arkham Asylum was one of the biggest surprises I’ve ever had as a gamer. I don’t generally like third-person action games, I don’t know anything about Batman, and I went into the game expecting a generic, licensed bore-fest.

Man, was I wrong.

The gameplay is fantastic no matter what platform you play it on, but the real advantage of the PC version of the game was its brilliant use of PhysX. If you’re not familiar with what PhysX does to the game, I suggest you watch this comparison video, and note this is just the maxed-out PC version with and without PhysX on — it’s not even a console comparison. Sure, it doesn’t fundamentally alter the gameplay (although I will admit to spending a bunch of time cutting down banners with batarangs and running around with the torn banner draped over my head until it fell off), but boy, does it add a ton of atmosphere.

Rocksteady has proven that they not only know how to make amazing games, but that they also know what they’re doing when it comes to PC gaming. I’m incredibly excited to see what they’re able to do with Arkham City.

To be blunt, the original Mass Effect is one of my least favorite games of this generation. I hated the combat, hated the Mako, hated a good portion of the characters, and hated the repetitive “dungeon” sections. Fast-forward to 2010, and Mass Effect 2 was my personal game of the year. BioWare took virtually everything that was wrong with the first game, and fixed it. I may have some minor quibbles with the morality system in the sequel, but on the whole, Mass Effect 2 is an absolutely stunning game, and I’m willing to bet Mass Effect 3 will equal, if not surpass, its predecessor.

It’s already a pretty series on console, but on the PC, the Mass Effect games are absolutely gorgeous. Add superior mouse controls for shooting and managing your inventory, significantly faster load times, and the ability to quicksave, and the PC version of Mass Effect 3 seems like a clear choice to me.

Honorable Mention: Anything Blizzard chooses to release in 2011

I’ve given up even attempting to predict when Blizzard will actually release any of its games, so this year I’m not going to embarrass myself again by anticipating a game that won’t see the light of day for another two years. Instead, I’ll just say this — if Diablo III, or the next StarCraft expansion, or a new MMO, or some other secret mystery game happen to release in 2011, I anticipate them. A lot.

I love any game that lets me watch over and control a virtual ecosystem — one that feels real, and can function on its own to some degree. Technology hasn’t yet reached the point where the game of my dreams can be created, but Eric Chahi’s From Dust may be the closest anyone has ever come.

There isn’t anything I can say that will get the point across better than this tech demo, so please, watch it if you haven’t done so already. From Dust is easily my most anticipated game of 2011. (That we’ve seen footage of, that is. Sorry, Pikmin 3.) I’ll be staying up super late to grab it the moment it goes live, no question.

Having gotten into Dawn of War II in a huge way recently, the series is fresh on my mind. These games are challenging — but fair — and the loot system is incredibly satisfying. I love the fiction, and I’m glad we’ll be able to play the single-player campaign as someone other than the Blood Ravens this time around.

All that said, nothing has me more excited for Retribution than the decision to drop Games for Windows LIVE for Steamworks. The aforementioned system has been nothing but trouble for me, and I know I’m not alone in my experience there. Forget Achievements, I just want to be able to play.

The Witcher 2: Assassins of Kings (PC)
Developer: CD Projekt RED
Publisher: Atari
To be released: May 17, 2011

The Witcher is another game I am only now trying out for the first time. While I’m not very far in yet, most of the elements people seemed to like about it have already become apparent — to the point where I almost just want to stop playing and wait for The Witcher 2.

That’s because it already looks that good — even in its relatively early state — and from the sound of it, the developers know where they went wrong with The Witcher. But I can’t do that; there’s save importing functionality. Drat.

Post-apocalyptic wastelands are still fascinating to me, which means Rage essentially has to make this list. After New Vegas, I’m ready for something different, and the id Tech 5 engine alone looks to be quite the departure from the recent Fallout games.

Rage will be one part first-person shooter, one part car combat. Upon hearing that the former will be the focus of the game, I let out a big sigh of relief. id has talked about the story having a drastic shift of some sort near the halfway point. I’m excited to see what that’s about, and hopeful that we won’t get too caught up with trying to guess the twist beforehand.

The custom games of Warcraft III ate up hundreds of hours of my life, including the occasional round of Defense of the Ancients. I haven’t gotten into any of the spin-off games, thanks to the, well, let’s just call them “serious” players. They sure know how to take the fun out of it.

There’s a chance Dota 2 could attract those same users, and I’m sure it will, but Valve has always been pretty good about making intuitive games and encouraging certain play styles and teamwork through smart design choices (look at Team Fortress 2). Plus, you have to imagine the Valve name will bring on a whole new group of players who don’t know what DOTA even is.

Additional staff picks for the PC:

You can tell we have a lot of PC gamers on staff.

This is just a selection of our most anticipated games for the PC. There are a ton of great games coming out next year, and we want to hear from you what YOUR most wanted PC game of 2011 is (use this giant list to help you figure out what’s coming out). Leave a comment telling us the games you want the most, and we’ll tally up your votes to reveal on Monday what the most anticipated games of 2011 are from the Destructoid community.