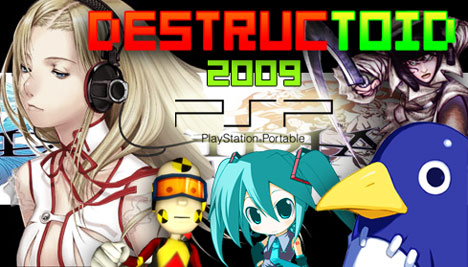 When you’re through laughing at the idea, we’ll get right to it. Sony’s handheld is a rumor mill favorite lately, and if you listen, you’ll hear whispers about anything from a new model in the pipeline, to speculation about the platform being dropped entirely.

The PSP may or may not be skating on thin ice, but either way, it’s not about to go down without a fight. In fact, there are several games that some of us are very much looking forward to this year, and you’ll find them compiled after the jump.

The arcade-only Technika notwithstanding, this is the first official release of a DJMax game in North America. A mix of the original DJMax Portable and DJMax 2, Fever retains the frantic button pressing madness and breathtaking visuals of its predecessors, and won’t cost me the extra cash associated with importing it from Korea. It’s also got a buttload of unlockables, to keep you playing long after the songs have driven you mad with their catchiness.

While the PSP isn’t exactly regarded as the friendliest platform for 2D fighters, it’s hard for an SNK fanboy to shrug off the idea of having every game in the Samurai Showdown series in his pocket. Anthology packs a true arcade port of all seven games onto one UMD, and throws in wireless 2-player, with a ton of unlockables if you’re flying solo. It also marks the first official release of Samurai Showdown 6 in North America. Not a bad deal.

3. Dissidia: Final Fantasy (Q2, 2009)
RFGO’s Stella Wong has been rocking the Japanese version of this since its release, and I’ve been forced to suffer through hearing the classic battle themes from numerous Final Fantasy games while only understanding about half of the dialogue. The North American version is set for a Q2 ’09 release, and it’s looking both beautiful and action-packed. While I’m well aware that it’s just another of Square’s fanservice fapfests, I’m not inclined to care when offered the chance to see 20 years’ worth of Final Fantasy characters beat the snot out of each other to the tune of some of the finest videogame BGM ever composed.

This one grants a secret wish I’ve had for years now. I’m a massive fan of Takehito Harada’s brilliant character design, but as much as I love the man’s art, I’ve never been able to stomach the tactics-heavy gameplay of Disgaea. Based on the Japanese demo I’ve been carting around for the past few weeks, there are some worries brewing about shitty jumping mechanics and redundancy, but when the combat and animation hit the sweet spot the way Prinny does, all the nasties fade away. The gorgeous overall visuals, clever humor and good music don’t hurt, either. I’m thrilled to finally have a title in this series that won’t make me want to pull out what’s left of my hair, and from what I’ve seen so far, it looks like we’ve got an awesome little game on the way.

Ha. See, the beauty of this is that it’s my list and I get to pick whatever the hell I want. What I want is Sega’s upcoming Project Diva, a Vocaloid-branded rhythm game featuring Hatsune Miku. There are very few things in this world that I love more than Miku, and I don’t mind a bit that Sega’s cashing in on her popularity. That’s because they’re doing so by pairing some yummy button-matching gameplay with new and original songs, as well as throwing in some customizable outfits for the young lady herself. It’s a Japan-only title, but that’s never stopped me before, and I’ll be ready to pounce all over this as soon as imports start shipping in.

The Red Star. The game was fantastic on the PS2, and its jump-right-in, shmup-meets-brawler spirit is perfect for a handheld title. It’s a truly worthwhile experience, and well deserving of a second shot for anyone who missed it the first time around.

This game is added not only because the PSP’s library is incredibly limited, but because I genuinely am interested in this game’s backstory. It’s set in a world where people have become so afraid of lawsuits, everything must be methodically tested for its safety. It just looks like any old PlayStation-era platformer, but hopefully it’s amusing enough to have legs.

I always wanted to play The Red Star on PS2 but never got around to it. I was actually incredibly surprised to see that it was heading to the PSP, because I did not know that. Still, now that I do, I am quite pleased and have added it to the list. At the very least, I appreciate the second chance to catch a game I missed.

Strikeforce is a Dynasty Warriors quite unlike any other, with all sorts of quasi-RPG elements and more than a few similarities to Monster Hunter. It’s a four-player co-op game, so good luck finding four people with a PSP and this game. The big differences here include a large amount of customization, Dragonball Z-esque air combat, much tougher enemies and huge boss battles. It’s another game I played in Tokyo and I found it quite interesting. Just a shame it’s focusing on co-op, which only works in Japan as far as the PSP is concerned.

It’s basically just massive fan service, but there’s nothing wrong with that. I got to play a little of this in Tokyo and it was pretty decent, like Crisis Core, only a bit more action-oriented. I’m a bit of a Kuja fanboy, so seeing him again will be the high point of this game. It looks beautiful for a PSP game, as is Square Enix’s calling card, and it’s probably going to inspire all sorts of horrid fanfiction. I’m in.

I love sidescrollers, I like Disgaea, so I am pretty certain that I’ll love Prinny: Can I Really be the Hero? This is definitely my most anticipated PSP title of the year, although obviously that’s not saying much. Provided that the sense of humor and addictive gameplay of the turn-based strategy titles are present in this portable spin-off, I think we’ll have a great little PSP game on our hands.

This is a novelty pick. I haven’t the slightest idea what the hell Baryard Blast is about, but I will buy it. I made a promise to myself to buy more than five PSP titles this year. The title makes me think it’s about zombie pigs attacking farm animals. I want that image stuck in my head until I pop in the UMD.

I loved the first Patapon despite my inability to beat the later levels. This one is touting some pretty cool multiplayer features, which may give me an excuse to actually seek a friend with a PSP.

Hey look, a Duke Nukem game in 2009. I don’t know much about this title. Apogee revealed that the game has 3D graphics and multiplayer, which is substantially more than what Duke Nukem: Forever is offering. If anything, the game will feature potty humor and pig cops. It’s a winning formula.

I know the Japanese press has already knocked it around, but I’m really looking forward to LocoRoco 2. It’s longer than its predecessor and has some pretty hardcore new gameplay enhancements like swimming and biting. Plus, it debuts at 20 bucks. Nothing can beat that.

Bend’s handheld companion to Insomniac’s Resistance 2 is looking like the hottest action title for the PSP since God of War: Chains of Olympus. The integration with R2 is a big selling point for me, but I also think the game’s adult-oriented narrative and PSP-specific action won’t disappoint. Check out that targeting system if you don’t believe me.

We’re not the only ones who are still getting some use out of “Sony’s paperweight.” Here’s what a few other Destructoid editors are looking forward to:

How about the rest of you guys? Anything you’re looking forward to this year? Do you think 2009 will be the “year of the PSP,” or do you think it’s on its way out? Hit the comments and let us know.