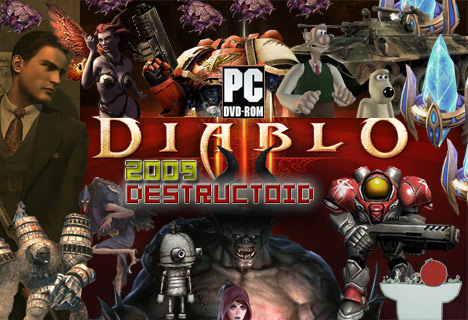 This week’s “Most Anticipated” series is coming to a close, and last but certainly not least comes the PC list. While some people say that PC gaming is dying, the list of games coming out this year (most of them exclusive) suggest that the PC is doing just fine as a viable gaming platform.

Anthony and I recently chatted about what games we’re most looking forward to for this upcoming year, and also about how Anthony is totally going to destroy Chad Concelmo when they have their epic volcano fight. Chad totally punches like a girl anyway.

Hit the jump to see what games we’re most excited about.

So, everyone has a few guilty pleasure games, and The Sims is one of mine. A lot of people criticize the series for being “too casual”, but that doesn’t matter because I think it’s a ton of fun. Looking at what’s been released so far, it appears that there are going to be a ridiculous amount of customization options and the characters look pretty lifelike, so your fantasies of creating a Paris Hilton look-alike and locking her in a closet until she wets herself can finally be realized. Even if you play the game without being a total pervert, there should be enough stuff to do to keep you occupied for a long, long time.

I’m a sucker for adventure games. Having grown up on King’s Quest, Indiana Jones, and Monkey Island, the lack of new adventure titles has been extremely disappointing. Machinarium almost slipped under my radar until I saw Chad’s post on it back in October. Gorgeous artwork, solid adventure gaming, and the crew responsible for Samorost – how could you not be pumped for this game?

Anyone who had a PC back in the late 90s has probably played Starcraft.  Hell, the original game is still wildly popular, and there’s a good reason why. Starcraft is still one of the best RTS games ever created, and there’s no reason to think the sequel will be any different. While I’m disappointed that they’re going to be releasing a separate game for each race’s campaign, the excitement I’ll get from finally getting my hands on a new Starcraft game will more than make up for it.

The original Half Life is one of my favorite shooters of all time, yet I have to admit that I was fairly disappointed with Half Life: Source. It was a nice upgrade, but it didn’t really take advantage of what the Source enginge was capable of, and everyone knew it could be better. Thankfully, a group of modders is taking matters into their own hands. Sure, Black Mesa isn’t a game, it’s just a Source mod, but it’s going to give the game a really nice new coat of paint, and who doesn’t want to play Half Life all over again? Oh, did I mention it’s free?

Ah, Diablo III.  For those of you that know me well, having this be my number 1 shouldn’t be a surprise at all. Countless hours of my life have been lost to Diablo and Diablo II, and I’m anxiously awaiting the day I can throw away what little free time I have left to Diablo III. I don’t care that there are rainbows in the game, I don’t care that it’s bright, and I don’t care that it kind of looks like World of Warcraft.  I just want to beat the shit out of skeletons and pick up tons and tons of items. Of course, there’s a caveat since TECHNICALLY the game hasn’t been announced yet, and it MIGHT come out in 2010. However, the general consensus seems to be that it will be out in late ’09, and I HAVE FAITH.

I don’t know much about Darkest of Days other than its premise: something akin to Black Hawk Down mixed with Doctor Who, you play a soldier who keeps time travelling to different wars in different time periods. Armed with only the technology of the time, you’ll find yourself fighting through WWI for a few levels before being suddenly transported into the American Civil War. The lack of concrete information thus far makes me skeptical, but if the game is even as half as cool as its premise, shooter fans could be in for one heck of a ride.

I will be completely honest: I have no goddamn idea what Blueberry Garden is about. In fact, I only have two concrete things to base my excitement off: the game’s wonderfully unique visual style, and the fact that it won “Best Innovation” at the Swedish Game Awards 2008. Still, there’s something to be said for a game whose trailer is so utterly confusing yet irresistably charming that, despite having absolutely no idea what was going on, I really wanted to play it.

Telltale’s episodic adventure series have been pretty hit (Sam and Max) and miss (most of the Strong Bad episodes), but I have a hard time imagining how anyone could screw up something as potentially charming as a Wallce and Gromit episodic game. There’s not a human being on the planet (with a soul) who doesn’t love Wallace and Gromit, and the duo’s adorably goofy inventions and enemies could fit quite well into a typical adventure game structure. Basically, as long as Wallace eats cheese at some point, I’ll be happy.

The first Mafia remains one of my favorite PC games of the 90’s, and one of the cooler sandbox games I’ve played in my lifetime. Dripping with badass gangstery style, the first Mafia game handled the balance between linear story and nonlinear world better than most Grand Theft Auto games. Though Mafia II is obviously a multiplatform release, it’d feel like a betrayal of my roots to get it on anything other than the PC.

Forget every game Tom Clancy ever affixed his name to — Operation Flashpoint is one the greatest military shooters ever made. Period. Brutally realistic yet intuitive and fun, Flashpoint was suspenseful and immersive as hell. That said, don’t pay any mind to Operation Flashpoint 2, also coming out in 2009: all the dudes who made the original OpFor have moved onto the Armed Assault series, whose second installment drops sometime this year. If you’re sick of regenerating health meters and indestructible vehicles, Armed Assault II could be the change in pace you’ve been looking for.

We also asked other editors and community members what they were most looking forward to on the PC this year. Here’s what some of you had to say:

What are the rest of you looking forward to in 2009?