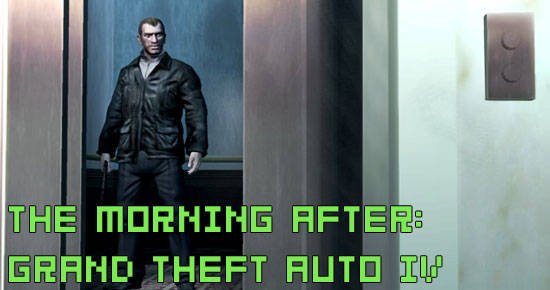 It’s been the darling of critics, receiving more than a few “perfect” scores. Given that the game is supposed to be good or something, we figured, “What the hell?”, and decided to try the game for ourselves. With the taste of the Grand Theft Auto IV hype still in our mouths, we’ve been spending more than a little time with the game.

Out of the ashes of a heated internal Destructoid email thread comes “The Morning After,” a round-up of our first impressions with what appears to already be a shoo-in for 2008 “Game of the Year.” What do we love? What do we hate? What could we possibly warm up to?

[Note: These comments are based on both the PlayStation 3 and Xbox 360 versions of the game, but it should be noted that everyone but Topher and Samit has been playing the game on the Xbox 360. Also note that all of these impressions were arrived at individually; each editor was not privy to the comments of others prior to this post going live.] 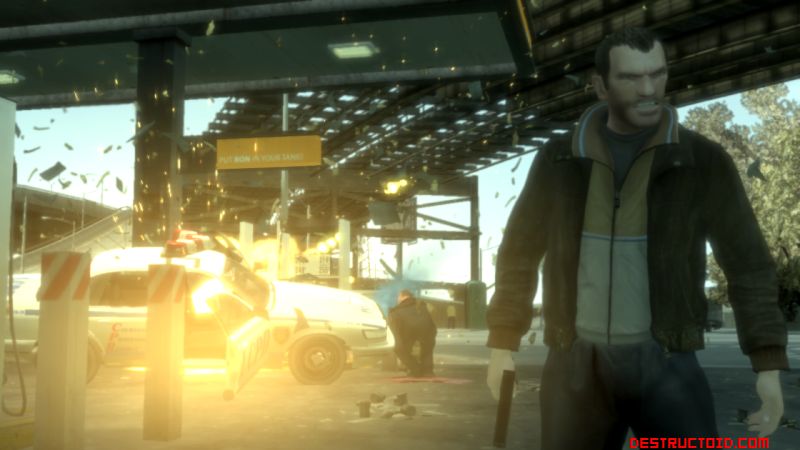 Hamza Aziz: “There’s just TOO much now. Being able to hide behind cover, blind firing, all the entertainment stuff you have to do to please your friends … just way too much. I love all the options that are being thrown at me. Even the stupid pointless crap like being able to switch your headlights from high to low. GTA has always been about freedom, and I know people said you’d have a lot of freedom in IV, but I had no idea it was going to be so much. I’m still near the beginning of the game and I know there’s still so much to do. I can’t believe I’ve only scratched the surface so far.”

Topher Cantler: “Niko. (Damn you Nick, why did you have to make it ‘Hot, Cold?’) One of the things that has bugged me about this series in the past is that I usually find the main protagonist be an obnoxious douche, but not Niko. He’s a surprisingly likable dude, with a decent personality, and for the first time in a GTA game, I actually care about what’s going to happen to him. I won’t mind finishing out the rest of the game in his shoes.”

Nick Chester: “I love that I’ve put hours into the game already, yet have barely touched or followed the game’s main story missions. I took a girl on a bowling date (I didn’t get lucky), I tried to beat a high score at an arcade game at a local bar, I went to a nightclub with my cousin … there’s a story I’m supposed to be following here, and I know I’ll eventually get to it. That I’ve only had a little nibble of Liberty City is amazing.”

Dan Lingen: “The flow of gameplay is beyond impressive, and I welcome the changes they’ve made in order to make it so. I was expecting gameplay to stop — as I had to stare at a loading screen with some sort of bald overweight white trash — as I pushed on the door to an apartment and, to my surprise, I simply walked outside. I freaking love just busting into places; it makes the game flow that much faster and makes me much more willing to go into stores and restaurants.”

Samit Sarkar: “This game has an absurd attention to detail that really makes the city come alive like nothing I’ve ever seen in a videogame before. When you stab a guy, and an EMT comes and yells, ‘Don’t you fucking die on me!’ while performing CPR, you know you’ve got something truly unique and special on your hands. You really feel like you could do anything or nothing at all, and the denizens of Liberty City would go about their business either way.” 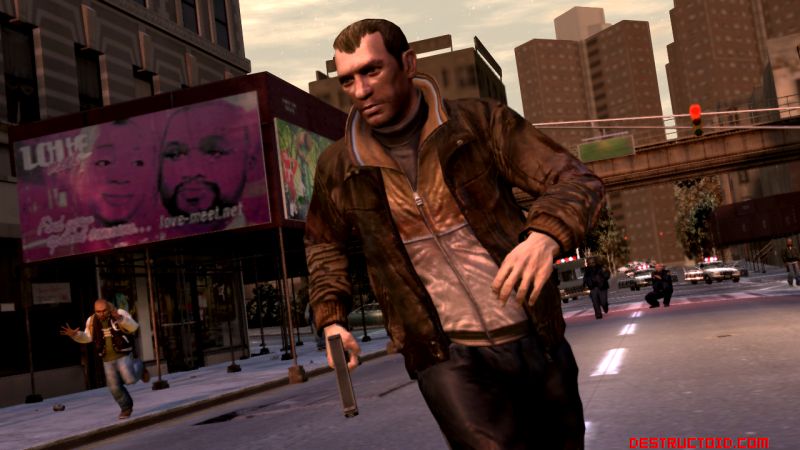 Hamza: “It was a bitch getting used to the driving. I was totally expecting the ‘arcadey’ style from the last game, and not this more realistic take. I’m getting better at it and figuring out what cars really work best for me, but I still get really annoyed when I mess up the turns and lose control of my car.”

Topher: “Mini-games and sidequests. I normally hate this part of GTA, but this time I’m not sure yet. Bowling felt like a chore, but yet I played pool with cousin Roman and very much enjoyed it. The Cabaret show? Kind of funny, but not really worth sitting through for me. Yet, taking someone out for drinks resulted in virtual drunkenness, which I think the team at Rockstar pulled off brilliantly. There’s always a fine line here between ‘fun extras’ and ‘pain in the ass,’ and I’m not sure which side of it I’m on yet. However, I will admit that about half of it is genuinely enjoyable, and I’ve never been able to say that about this part of the game before.”

Nick: “The reason I had never stuck with earlier GTA games to completion is because there were too many ‘fetch’ missions — pick someone up, drop them off; pick someone up, help them shoot people; chase someone in your car. Repeat. The early missions in GTA IV seem to follow this formula, but I’m still hoping that the game compels me to see it all the way through.

Dan: “Your cell phone seems like a cool idea at first, but I’m afraid it will get annoying over time. The last thing I want is some woman who constantly calls me and needs attention. I’d also like to see text messaging work with your Xbox LIVE friends list, but there’s only so much Rockstar can do.”

Samit: “I’m not as big a fan of the soundtrack in GTA IV as I was of San Andreas’ music. So far, I’ve stuck mostly to the talk stations (priceless, as always) and Liberty Rock Radio 97.8. It features a number of my favorite songs, such as ‘The Seeker’ by The Who, ‘Edge of Seventeen’ by Stevie Nicks, ‘1979’ by The Smashing Pumpkins, ‘Evil Woman’ by Electric Light Orchestra, ‘Jailbreak’ by Thin Lizzy, and ‘Rocky Mountain Way’ by Joe Walsh. But of course, that’s a completely subjective thing; I’m an old-school rock kinda guy.” 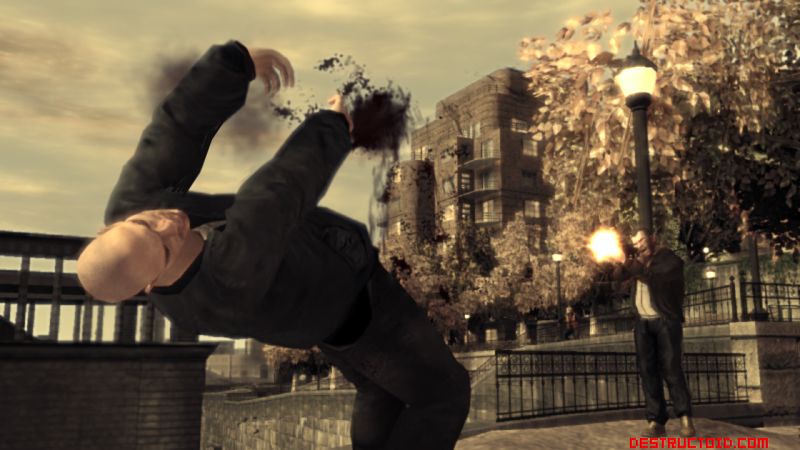 Hamza: “I don’t like that you’re given the option to restart a mission. I’d rather have the game force you to replay through the mission again. I don’t want to go and see what happens when I’ve failed a mission. This is mainly due to the OCD in me with games. I love having multiple options in games, but I hate having multiple options in the story line. I’m not exactly sure what the results are when you’ve failed a mission though, as I always just restarted the mission.  That, and I’ll probably end up hating anything involving boats in the game. The boat levels always suck in GTA.”

Topher: “The graphics. My initial reaction was, ‘This game looks like dog crap,’ and the character models look like the same blocky robots we’ve always gotten with GTA, only now they have acne and stubble. Too much of it seems like a shinier coat of paint on the same old jalopy. Trees and plant life are laughably two-dimensional, and anything you might find pretty about the current-gen lighting, bloom, and particle effects is quickly countered when you turn to look at a building or car and see it covered in seams and jaggies like an early PS2 game. However, the longer I play, the easier it is to overlook this stuff, and while it may look awful for a current-gen game, it still looks fantastic for a GTA title. I’m settling in and getting over it.”

Nick: “This probably only applies to the Xbox 360 version, but why in the hell does the game ask me where I want to save every single time I save for the first time each time I continue my game? I told the damned thing last time I wanted to use the hard drive … so just use the damned hard drive again. This is made worse by the fact that I don’t even have a damned memory unit in my system; there’s only one option for Christ’s sake — use it!”

Dan: “DRIVING! I’ve always liked how easy driving was in this series, and now they’ve gone and crammed hookers in the physics engine. In the past, you simply had to hold the emergency brake and have a little corrective steering, and you could pull off any turn in the game with a stylish drift. Now when I pull the e-brake, my car loses absolutely all sense of what physics should feel like, sends itself spinning into the building I was trying to turn around, and worst of all it, makes the camera spin around with it. I don’t understand what Rockstar was going for; they gave us cars that are comically difficult to drive, and matched them with a physics engine that doesn’t seem to understand how a car would actually react to hitting a bum crossing the street.”

Samit: “I couldn’t think of a single thing that I hate about this game. But if you have to ask (and Nick did — *grumble*), I really wish you could save anywhere. I mean, I know there’s an autosave system that saves after any sort of event (e.g., a date with Michelle, finishing a mission, etc.), but I still find it annoying that I have to schlep all the way back to my safehouse if I want to save my game manually.”