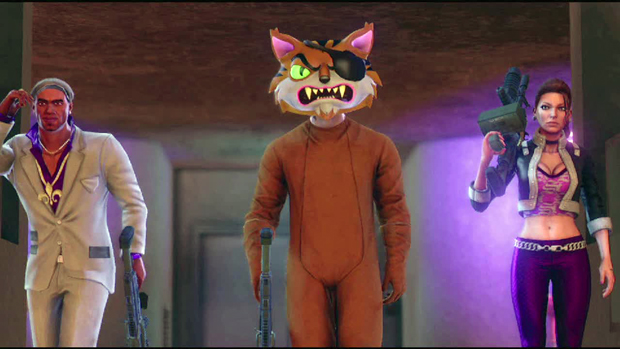 Compilation of game and all supplemental content releases November 6

Next week, THQ is set to unleash the “Full Package” edition of Saints Row: The Third. A re-issuing of the 2011 game, it also packs in every bit of additional content released, including missions, vehicles and costumes. You’ll be able to pick it up in stores on November 6 in the US, and everywhere else on November 16.

And to celebrate All Saints Day, Volition has also dropped a few new items into the game, including a hoodie, basketball jerseys and an antennae hat. Just pop on down to Let’s Pretend in the game and they’ll be waiting for you to try on, if you’re so inclined.

I really loved The Third, enough that it became an obsession until I’d completed everything in the main game (save maybe a race or two; I do have my limits), but for some reason I didn’t play more than a couple hours of the additional content. I was having fun with the GenkiBowl missions and then just lost interest in playing further, it seems. I honestly don’t know why I never played the rest of it (I bought a season pass, after all). So, I guess I can’t really speak to how much of a value this will actually be for people. What say you?

Filed under... #Saints Row#Saints Row: The Third -- The Full Package#THQ#Volition