There’s really nothing like a console midnight launch. Even the worst-case scenario is a bloodbath where everyone is looking out for themselves. It’s not every day you get to experience a real-life low-stakes version of Lord of the Flies! Thankfully, the scene at the Best Buy in West Hollywood last night was upbeat and friendly — the best-case scenario. I bonded with the people in line pretty quickly, thanks in part to my willingness to bring them back some McDonalds and report on the status of the line at the GameStop just around the corner.

We played an incredibly nerdy version of charades, where anime and superheroes were more common answers than pop-culture blockbusters. For some reason, we started joking about peeing in bushes, and that eventually turned into a communal viewing of the infamous (and completely SFW) Piss Challenge video. There was a guy who brought his guitar, noodling away for a good three-odd hours. I stood my ground as people said the Nintendo 64 had more than like five good games. And I had a tough time figuring out why everyone was standing in line.

When I asked my linemates why they were camping out for a Switch, everyone responded with one word: “Zelda.” Even though there was plenty of confusion about launch bundles — the savvy employees at our Best Buy put out some Twilight Princess Ganondorf statues, that from a distance honestly did kind of look like Breath of the Wild Switch bundles — as well as accessory pricing and availability, people were still all the way there for a Nintendo Switch.

No matter who I talked to in line, somebody was confused about some aspect of the console: be it the launch lineup, product availability at this particular Best Buy, accessory pricing, or even the games that had already been announced. Thanks to Nintendo’s poor messaging, people thought Mario Kart 8 and Splatoon 2 were launch games. I did get a particular kick out of telling people how much the Pro Controller cost, though. Nobody was expecting $70. 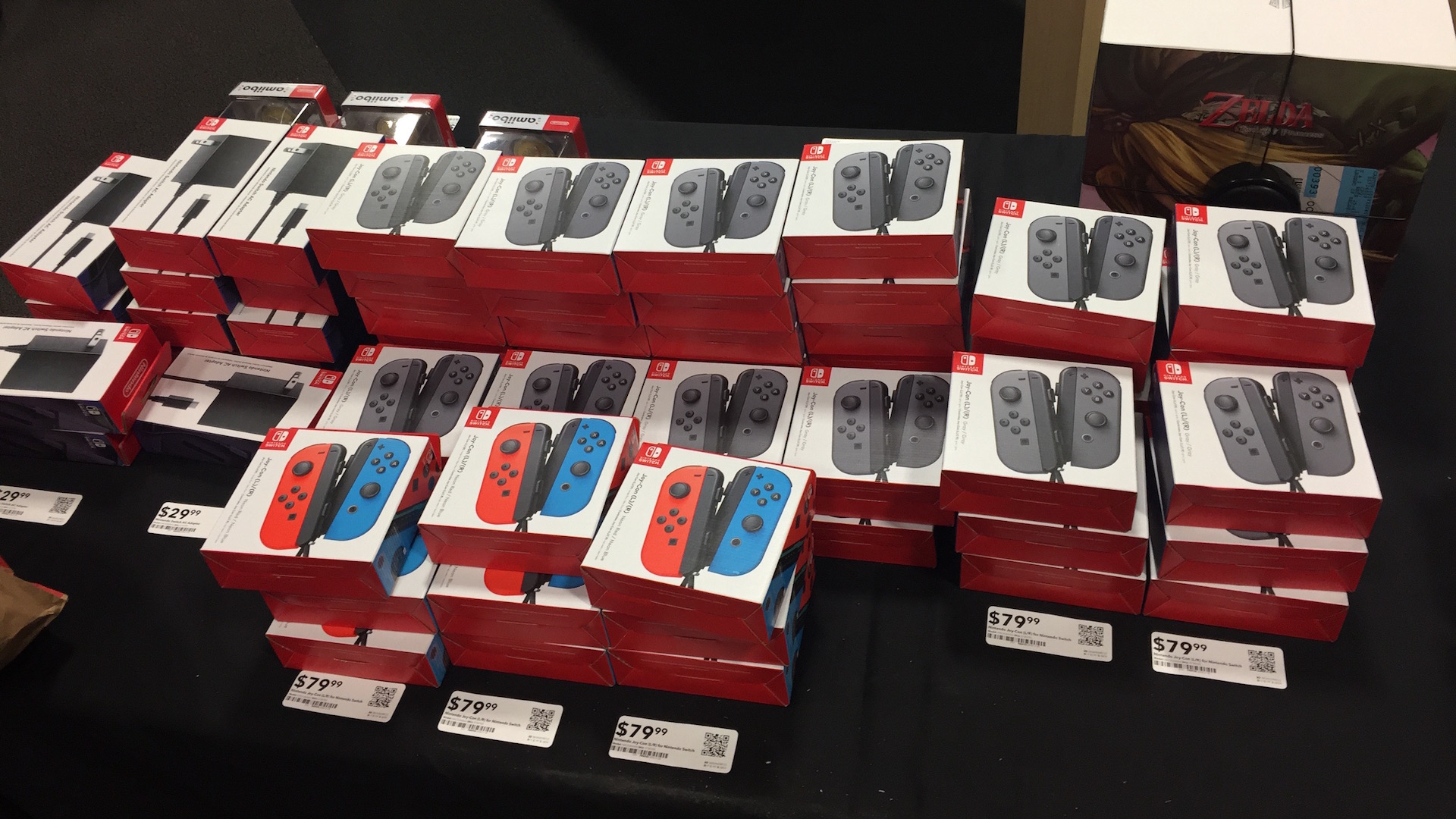 The Best Buy I went to mostly had its shit together. When I asked how many Switches had been allocated for customers without pre-orders, I was told the store had a “shitload,” a prediction that absolutely turned out to be right. Around 10 PM, store employees came through the line, asking people if they wanted a grey or neon Switch. Customers gave their answer, and they were handed a piece of paper with the available launch products and a number. That number corresponded to a label on each Switch inside the store. By the time midnight rolled around, everyone who lined up was able to get a console. Around 1 AM, the store ran out of Pro Controllers and screen protectors, but it seemed like everyone could get a console, a launch game, and some Joy-Con controllers if they were so inclined. (Anecdotally, there seemed to be fewer Neon Joy-Con available when I left the store.)

My launch experience was not quite as smooth, but that was totally my fault. I had pre-ordered a Switch and Zelda from Amazon, and decided to try and get a Pro Controller and 1-2-Switch while I was out. I went into Best Buy before the event started in the hopes of pre-ordering all that nonsense, but they told me to just pre-order 1-2-Switch online. I had to hit up the aforementioned GameStop for the Pro Controller, where one employee told me they would only be offering units to existing pre-order customers, but another employee told me I could pre-order one. Guess which employee I believed?

Since GameStop was turning away customers without a pre-order and the Target on the upper level of the shopping center wasn’t letting people in until 8 AM the next morning (although that didn’t stop some ambitious folks from lining up. I told them about the cornucopia at the Best Buy downstairs. They didn’t believe me), Best Buy was easily the place to be, whether you were looking for a Nintendo Switch or just a good time. There were a couple friendly faces in the GameStop line, but Best Buy felt like a party. The people who weren’t standing outside for Zelda were only there out of obligation. It was a console launch, in other words.

Even though I knew there would be a Switch ready for me the next day, I still had to go check out the situation. There’s really nothing quite like the excitement and mystery that surrounds the launch of a new video game console. Will it sell? Will people actually like it? How scarce will it be? What will be “the story” that comes out over this weekend, the one that defines the future of the console? Right now, it looks like we’ll remember the Switch launch for controller connectivity problems and game cartridges that taste horrible, but could any of us have predicted that? This is a fun business. I like it.