Resident Evil’s Paul W.S. Anderson is on board

Given its past successes, Capcom is understandably interested in pursuing a film adaptation of Monster Hunter, and so is writer-director Paul W.S. Anderson (Alien vs. Predator, Death Race, and the still-ongoing but almost finished Resident Evil series), according to Deadline. Anderson and producing partner Jeremy Bolt are teaming up again, this time for the monster-slaying action-RPG series.

“It’s very much [Capcom’s] crown jewel,” Anderson said of the property alongside Bolt in a wide-ranging Q&A with the publication. “They’ve said what they love about Paul is he understood the spirit of the game and expanded and made more of it [with Resident Evil],” explained Bolt. “Commercially and creatively, they really respect that. They are trusting us again, on Monster Hunter.”

The movie’s logline sounds somewhat reasonable, albeit with the degree of separation from the games that you’ve probably come to expect: “For every Monster, there is a Hero. An ordinary man in a dead end job discovers that he is actually the descendant of an ancient hero. He must travel to a mystical world to train to become a Monster Hunter, before the mythical creatures from that world destroy ours.” 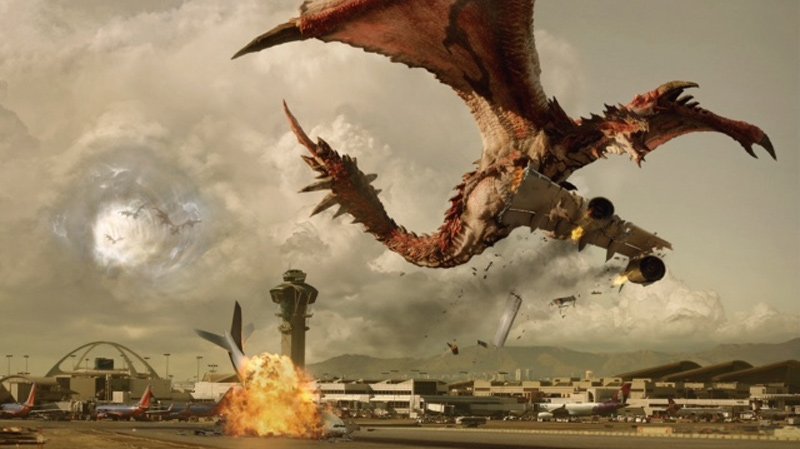 Anderson told Deadline he loves the setting of Monster Hunter, and saw it as a natural fit for cinema as something “we could expose and build a whole world around, like a Marvel or Star Wars universe.”

So, what the heck is up with that LAX rendering? Strap in.

“The central characters are very relatable American characters. You take a person from the ordinary world who thinks they’re in a dead end job, they have no future, they feel like their life’s a failure, it’s going nowhere, like Keanu Reeves in The Matrix. It’s about a normal American who gets dragged into this parallel world, this Monster Hunter world. Then eventually the parallel world ends up coming to our world. So you have the creatures from the Monster Hunter world invading our world.

The mythology is that basically monsters are real and all the monsters and creatures from our mythology, whether dragons or the Minotaur, or Chinese dragons, it’s all real. They were real. They really existed in our world. For every monster there was a hero that fought the monster. And then those monsters just disappeared, overnight. They ceased to exist, as did our need for heroes. They became a thing of myth and legend, but eventually the monsters will come back. Unless we have a hero to help fight them, our world with be devastated by these returning creatures, after we’ve chosen to put our faith in technology rather than heroes. All of our technology won’t mean anything once the dragons start raining fire.”

Like I said, bananas. And if all goes according to plan, this won’t be a one-off.

“It’s definitely intended to be a franchise because the movie starts in our world and then it goes to the Monster Hunter world and then the final act comes back to our world and it’s basically this epic battle in and around LAX,” said Anderson. “Then at the end we’re suddenly confronted with the fact that the mythological creatures of our world have come back to wreak vengeance. So we definitely have the second film where that would be planned out.”

If it’s anything like Monster Hunt (which I thought was silly fun), it’ll print money in China.