When you are playing a videogame, it is natural to want to attack and destroy your enemies. Be it with a master sword, a spread gun, a whip, or some other wicked form of weaponry, when you see an enemy in front of you, tapping the attack button is an instinctual reaction.

When a scary creature approaches you, taking it down with a final, finishing blow results in nothing other than a feeling of great satisfaction. Guilt never enters the equation. Why would you feel any kind of remorse for killing a monster?

At an emotional, surprisingly heartbreaking moment in role-playing game Final Fantasy Adventure for the original Game Boy, this very concept is turned on its snake-covered head. What happens when a particular monster means much more to you than the endless supply of other generic enemies? What if this monster has a life? A family? What is this monster is … a friend?

My first experience with a Final Fantasy game on the Game Boy was Final Fantasy Legend, an interesting, if flawed, take on the classic role-playing series. When Final Fantasy Adventure released little more than a year later, I cautiously purchased a copy, worried that it would be more of the same gameplay offered in Legend.

I was so happy to be wrong. The game didn’t play like Final Fantasy Legend at all! It was years later when I discovered that Final Fantasy Adventure was actually the first game in the Mana series — only a Final Fantasy game in name alone! — explaining why the game played much more like Zelda than any other game in the “Final Fantasy” series. 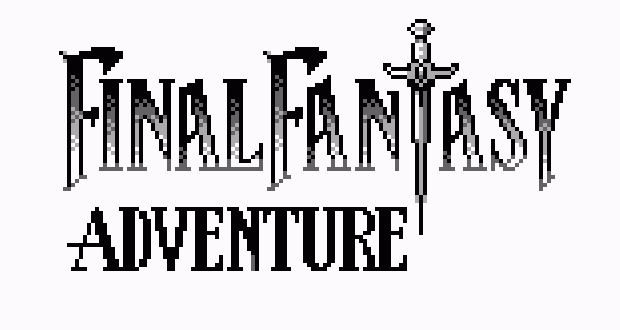 In the game, you play as an unnamed hero who is a slave of an evil Dark Lord.

As the game begins, the imprisoned hero must fight a giant beast inside a massive arena. After defeating the creature, the hero escapes, but not before overhearing the Dark Lord and his mysterious sorcerer Julius talk about their evil plot to take over the power of the Mana Tree. 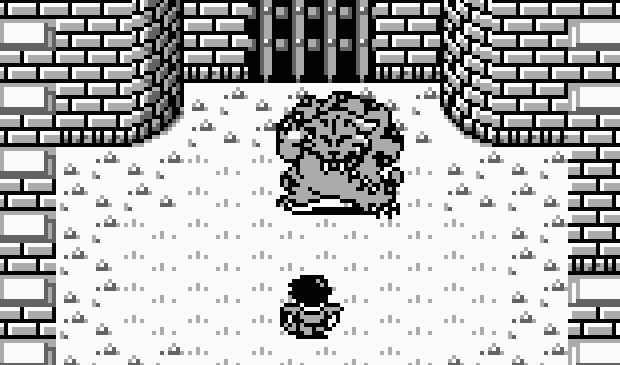 Bruised and barely alive following his escape (he did fall from a waterfall after all), the hero meets a beautiful, kind young woman.

Coincidentally, the woman is looking for a series of magical objects that will help defeat the Dark Lord and Julius from going forward with their plan.

Intrigued, the hero decides to help. 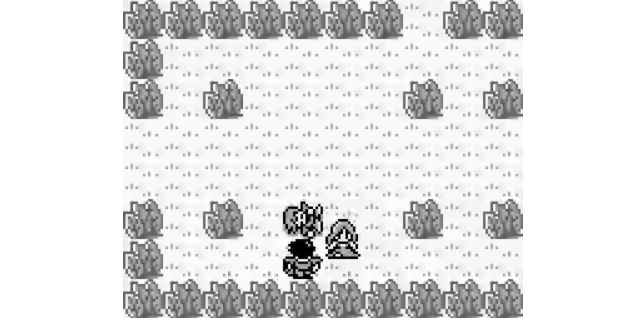 What follows is a massive adventure through many worlds, as the hero and his female companion search for the artifacts that will put an end to the antagonists’ plan.

At several points in the game, the hero is joined by a non-playable partner that helps him fight through many different areas. Sometimes this partner is the main female character, and other times it is a brand new character.

These non-playable characters all have different attributes and help the main hero in many ways. 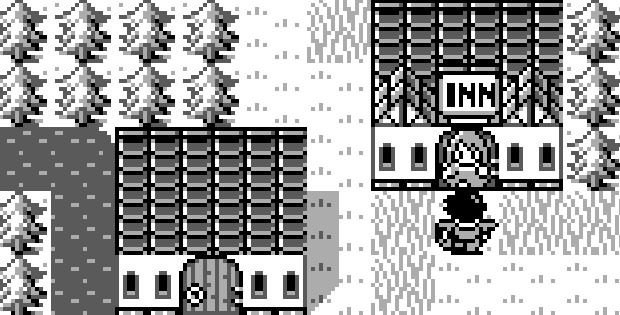 At one point, the hero boards a giant airship piloted by the sorcerer Julius. After stealing a mystical pendant (one of the items he is searching for!), the hero is knocked from the airship and plummets to the ground below. 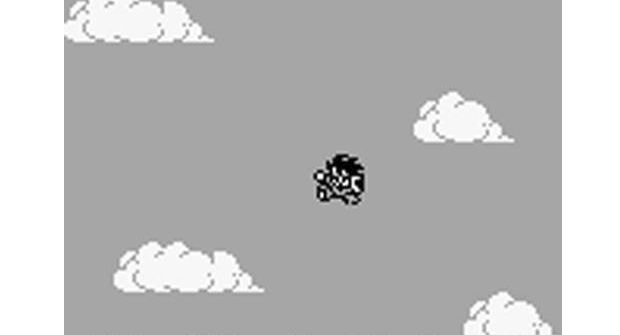 Miraculously surviving, the hero drops the pendant and it is abruptly stolen by a young girl named Amanda.

It is here when this week’s Memory Card moment occurs: The tears of a monster.

Amanda is not a bad person. Being a slave of the Dark Lord just as the hero used to be, she only steals the pendant to trade it with the slave leader Davias in exchange for her imprisoned brother Lester.

She loves Lester with all her heart and would do anything to free him from his life as a slave.

Because of her intentions, the hero accompanies Amanda to see if he can help her get her brother back.

Offended that Amanda would even attempt such a trade, Davias instead turns Lester into a parrot and steals the pendant away. 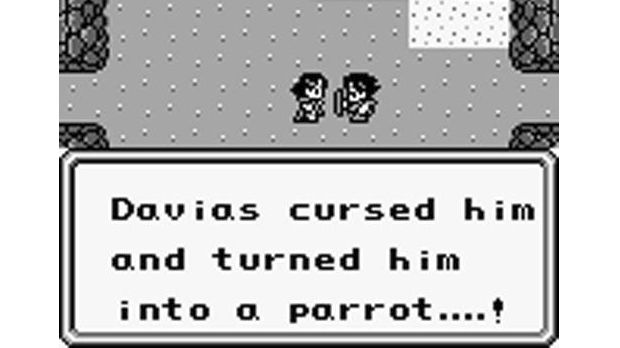 At this point, she learns that the only thing that can save her brother are the tears of Medusa, a horrible, terrifying creature that lives in a far-off cave. By retrieving Medusa’s tears, Amanda can turn her brother back into a human and be reunited with him once again.

Agreeing to help, the hero and Amanda make their way to Medusa’s cave. 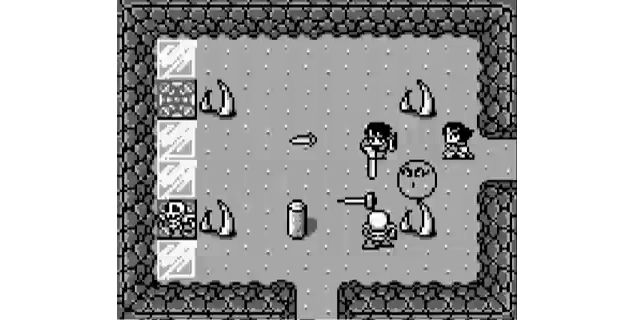 Once overcoming all the challenges of the cave, Amanda and the hero eventually reach Medusa.

The battle with the scary monster is tough, with the two companions having to use all their skills (and each other) to put an end to the horrifying creature. 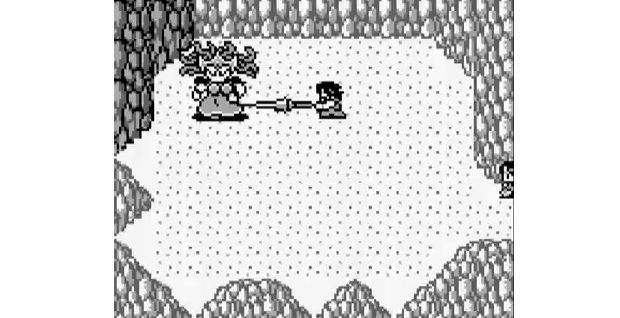 With one final blow, Medusa comes to an end.

Before she dies, she begins to laugh. She questions why the two warriors have come for her tears when there are no tears to gather.

When Amanda steps forward to gather the tears, she realizes Medusa has none. Not a single drop appears on the grotesque creature’s face.

Amanda lowers her head. All hope is lost. Her brother will never be saved.

The hero tries to make her feel better. He tells her they should go back to Davias. Maybe there is another solution?

As Amanda steps forward, she feels a sharp pain.

She looks down and sees a large cut on her body. Medusa must have bit her during the battle. 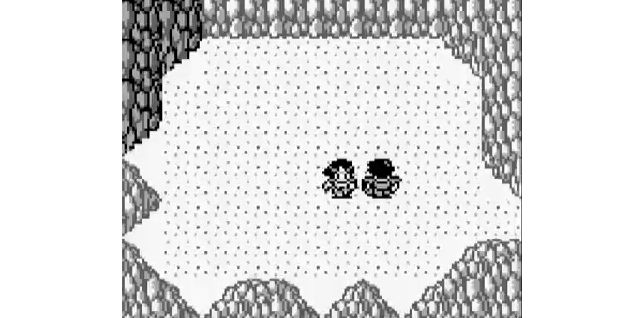 The hero looks at her, confused.

Amanda slowly speaks. “One who was bitten by Medusa turns to Medusa.”

The hero realizes what this means. Amanda will soon turn into Medusa.

She then asks the hero the unspeakable.

She asks him to kill her and use her own tears to save her brother Lester. 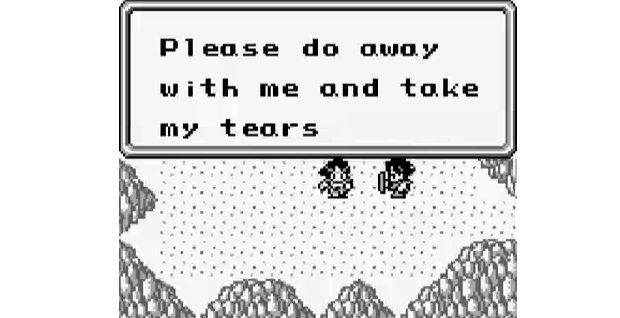 Amanda insists, saying it is the only way.

She begins to cry as her body starts to transform. 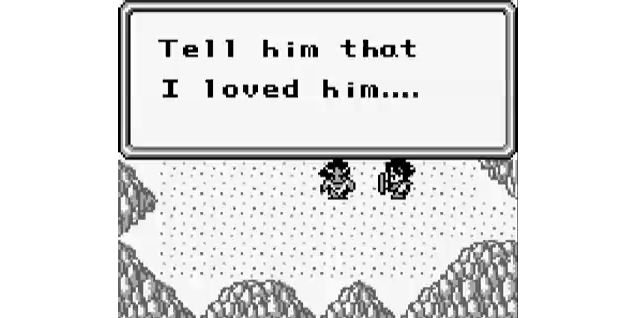 The hero has to act fast.

At this point, the player is given full control. Amanda starts to turn into Medusa. You, the player, must step forward, hit the attack button, and actually slay the hero’s sweet, loyal, brave companion.

You must kill Amanda.

With all the courage and sadness in his body, the hero steps forward and commits the awful act. 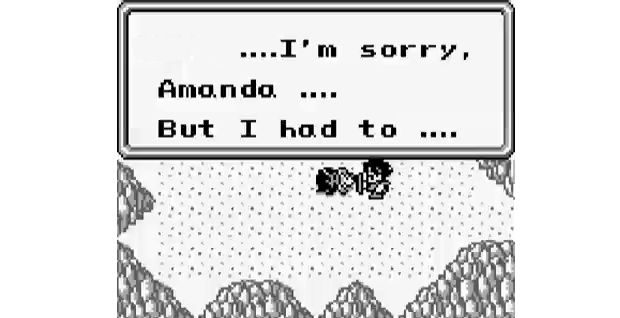 Amanda’s newly mutated body collapses on the ground. The hero apologizes, gathers her tears, and turns away from the horrific scene.

With Amanda’s tears in hand, the hero returns to Lester and turns him back into a human. 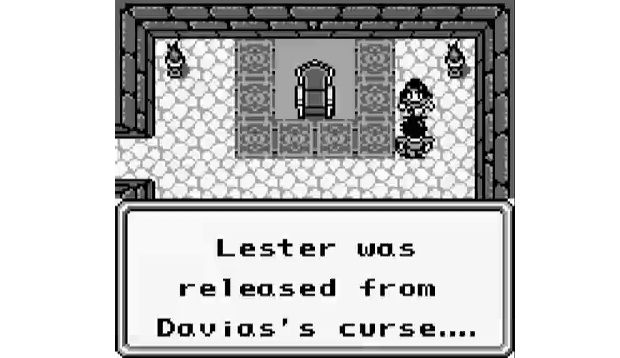 Telling him what happened, Lester joins the hero, determined to get revenge on the evil Davias and bring peace to the world that took his beloved sister away from him.

Yup, this scene actually happens. IN A GAME BOY GAME!

Before I played Final Fantasy Adventure, I had never really experienced any real emotional scenes in games on the original Game Boy. Sure, I got a little teary-eyed when I watched the Space Shuttle take off at the end of Tetris, but that was mainly because I finally beat the legendary puzzle game after hours and hours of playing. (Keep in mind, my favorite game on the Game Boy, Link’s Awakening, had not been released yet.)

When I had to kill my friend Amanda the moment caught me completely by surprise. It even happens so quick in the game. One minute you are battling a tough boss, the next minute you are being asked to kill your own friend.

It is a very abrupt transition and comes out of nowhere, made even more shocking by the fact that it happens on the Game Boy.

At that point in time, my Game Boy was reserved for “simpler” games, or, to be more fair, games without rich stories that actually challenge the player to look at videogames in a different way.

But this one, specific moment, really pushes the boundaries of what can be done in a videogame.

That is pretty dark stuff.

But, more importantly, you, the player, have to deliver the finishing blow.

It would have been easy for the game designers to let this all play out in a cutscene. Amanda could have been killed in the cutscene, and the scene would have still been very emotional and sad.

But, no. You must kill her. You must look her in the eye, push your attack button, and watch as this sweet, lovely girl dies in front of you. All because of your button press.

Granted, by killing her you are, in turn, saving her brother, but that doesn’t make the scene any less powerful.

This detailed choice by the designers to have the player kill Amanda is a small one, but completely changes the dynamics of the moment. With this one choice, Final Fantasy Adventure goes from a stellar role-playing game, to something that is altogether sad, shocking, disturbing, haunting, beautiful … and unbelievably memorable.