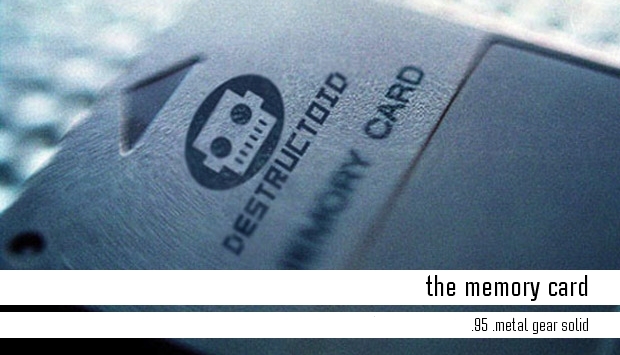 Summer is in full swing. And with summer comes a slew of blockbuster movies filled with ridiculous, over-the-top action sequences. Action sequences that impress with their combination of chaotic choreography and unbelievable stunt work.

And for fans of these action sequences (like me!), playing modern videogames is a real treat. With the advanced technology of today, it seems like every other videogame features a handful of completely out of control action set pieces that rival (if not surpass) every blockbuster in the movie theaters.

But this wasn’t always the case. As exhilarating and tense as the final escape from Zebes is in Super Metroid, having a character jump around a 16-bit world in a 2D space looks nothing like a real-life action movie. So, then, when did the switch happen? When did videogames go from looking like videogames, to looking and feeling like you were actually playing a summer blockbuster?

For me, it happened in the original Metal Gear Solid. When I first played the original PlayStation classic, there is one sequence during the climax of the game that blew me away, filled my body with adrenaline, and, for the first time ever, made me feel like I was actually playing an action summer blockbuster.

While the sequels have arguably got better over the years due to better graphics, better voice acting, and killer story twists, the original Metal Gear Solid for the PlayStation will always be considered an absolute masterpiece, due in no small part to its cinematic presentation and seemingly infinite amount of memorable moments.

In the game, you play as Solid Snake, one of the most iconic (and badass) videogame characters of all time.

Even though the story of Metal Gear Solid is a little confusing, it is easily the least confusing of the four main games in the series. Being the first entry in a long, complicated thread, Metal Gear Solid benefits from a more focused, introductory story.

Basically (and it’s hard to use the word “basically” when describing a Metal Gear game), the game follows Solid Snake as he infiltrates Shadow Moses, a nuclear weapons facility, trying to put an end to a terrorist threat from the rogue group FOXHOUND. 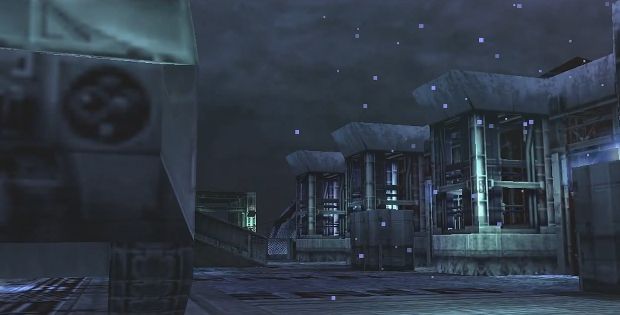 Along the way he meets a handful of memorable characters, too numerous to count, and takes part in some classic gameplay sequence, each one more creative and impressive than the last.

When he first enters Shadow Moses, Snake’s first mission is to locate the Department of Defense chief Donald Anderson. As he enters the air duct above the prison cells, he meets a woman by the name of Meryl Silverburgh. 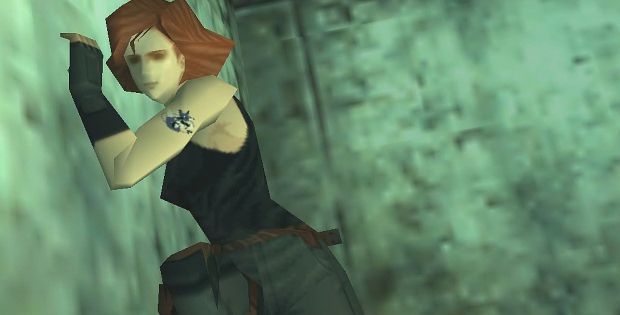 After Donald Anderson has an unexpected heart attack (one that appears far from natural), Meryl assists Snake in escaping the prison just before they are captured.

Throughout the rest of the game, Snake works to discover the whereabouts of a massive nuclear weapon known as Metal Gear. At times, he works with Meryl, but the two are separated at random times through some extraordinary circumstances. 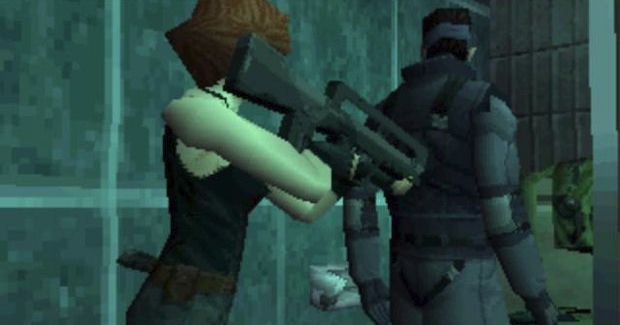 As Snake makes his way into a massive hanger at the end of the game, he beholds two shocking sights.

The first is Liquid Snake, Snake’s twin brother and fellow clone of Big Boss. He has been behind all the happenings at Shadow Moses and is determined to destroy his brother Snake once and for all. 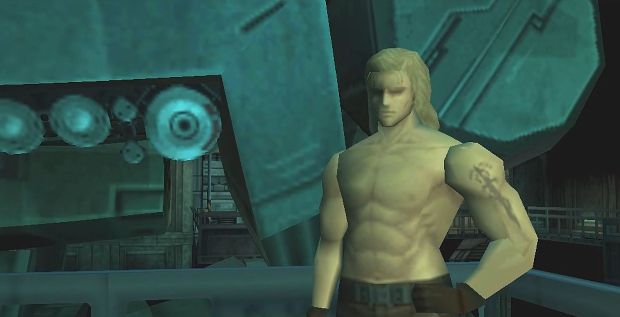 The second is Metal Gear REX, a massive robotic mech (and upgraded version of Metal Gear), that Liquid is, unfortunately, piloting. 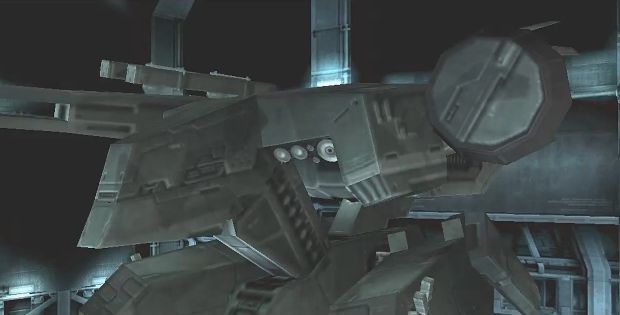 The multi-tiered battle that follows is stuff of videogame legend, with Solid Snake fighting Liquid and the giant mech, eventually even battling his brother in a one-on-one fight on the top of REX.

Once Liquid is defeated, Snake is reunited with Meryl (or Otacon, depending on how you played the game), as the two hurry to find a way out of the facility.

It is during this tense escape when this week’s Memory Card moment occurs: The jeep chase.

Although it is possible to play this final section of the game with Otacon, for the purpose of this article, we will assume Meryl is Snake’s partner, as that is the more common (and, frankly, better) of the two scenarios.

With Snake in town, Meryl leads the charge to escape the facility. 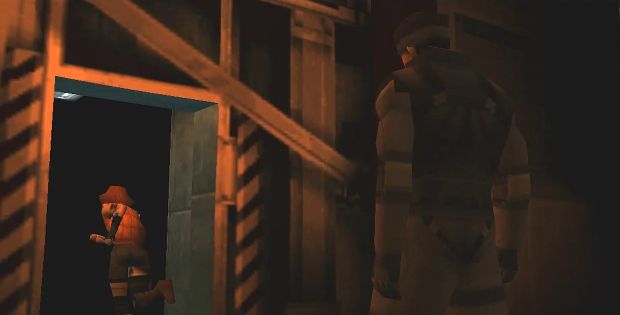 The two unexpectedly enter a garage, where Meryl spots a helpful jeep. She rushes to the driver’s side and notices … there are no keys. Dammit!

Meanwhile, a surveillance camera catches the pair in its view and starts to blink red. 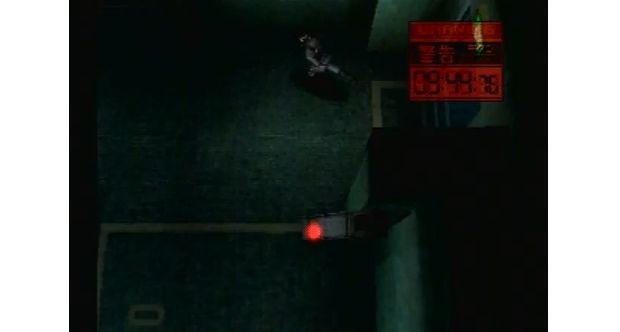 The soldiers rush in one after the other.

Snake must hold them off as Meryl tries her best to get the jeep started.

Just as Snake can’t hold the enemies back anymore, Meryl revs up the jeep and calls for him. Snake leaps into the back of the jeep and plants himself behind a giant Gatling gun. 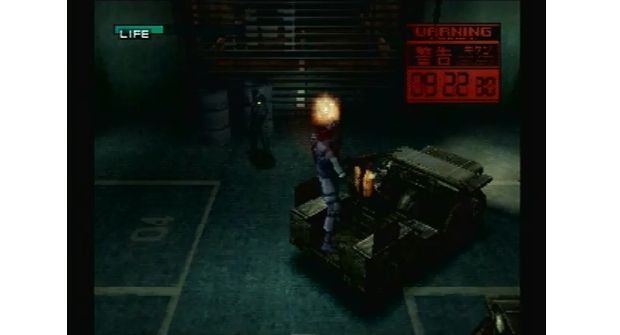 Meryl starts to drive the jeep, but is blocked by a wall of soldiers.

Snake grips the Gatling gun and starts firing, mowing down the line of enemies in front of him.

Once a path is cleared, Meryl pushes down on the gas pedal and drives into a dark hallway.

The jeep speeds through the hallway, a long passage lit only by the warm orange emergency lights on the side of the wall. 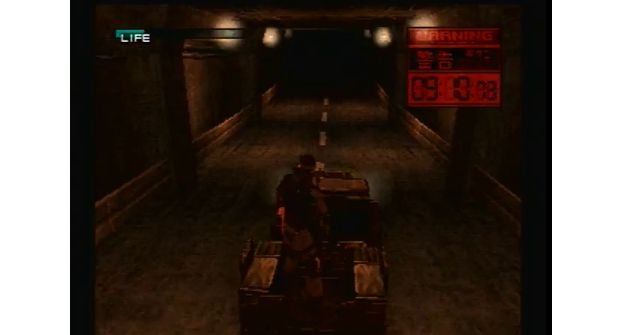 After turning a corner, the jeep approaches a security checkpoint. Meryl slams on the brakes just before she collides with the guard post.

Just as before, Snake starts firing, this time focusing his shots on the tried-and-true red barrels, which explode in a massive fireball upon impact. 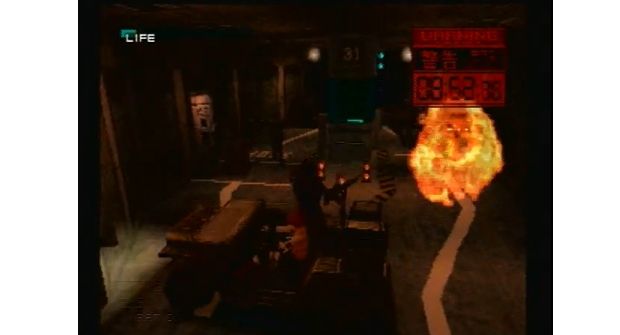 The explosion opens up a path for Meryl and Snake, but the jeep must get past a few more checkpoints before the pair can move on.

Eventually, they pass all the checkpoints and continue driving (fast!) down another long hallway.

All of a sudden, the camera swoops around in front of the jeep. From the darkness in the background, a set of headlights emerges.

Another jeep pulls forward, this one driven by none other than Liquid Snake himself. He is still alive!

Immediately, Liquid proceeds to ram Meryl and Snake’s jeep and fire at them with a gun of his own.

At this point, Meryl is in full control of the jeep and Snake must control the Gatling gun to shoot Liquid fast enough to avoid getting shot himself.

As this duel takes place, the environment rushes by in a blur.

The hallway changes shape and size, forcing Meryl and Liquid to maneuver their jeeps between concrete columns to avoid collision.

As all this is happening, the camera flips around to different angles, giving Snake a more focused view of Liquid.

The chase heats up as the two continue shooting each other. 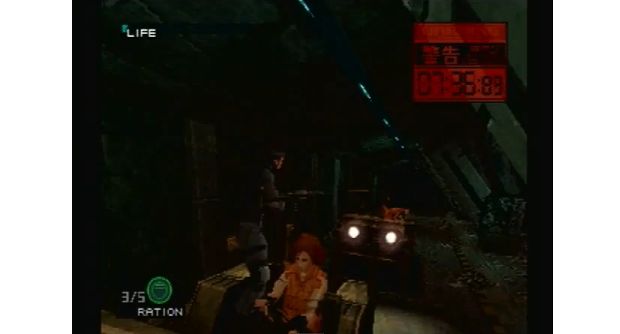 After an intense and brutal chase, Liquid eventually pulls to the side of Snake and Meryl. Before he has a chance to ram them, Snake shoots Liquid and his jeep loses control. It flies in front of Snake and Meryl and flips over, just as the two emerge from the dark hallway.

The screen fades to white.

When it fades back in, both jeeps are shown flipped upside down in the bright, white snow next to a giant cliff. 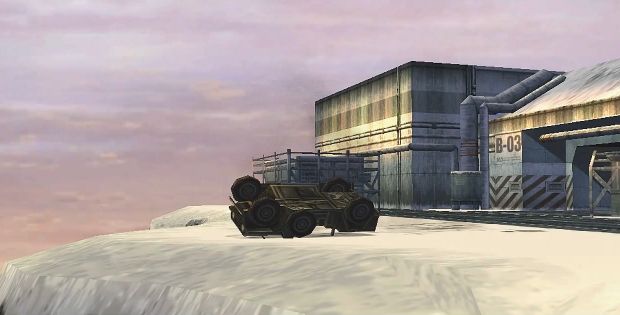 Snake and Meryl try to crawl out of the jeep, but realize their legs are trapped.

Suddenly, Liquid emerges, limping from behind his wrecked jeep. He has a huge gun in his hand.

Before he has a chance to shoot, the lethal FOXDIE takes hold of him and crumples his body to the ground.

He dies, angry and lonely in the cold snow. 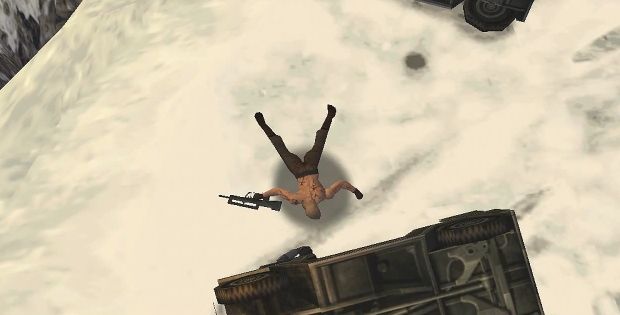 Snake and Meryl free themselves from the wreckage, board a convenient snowmobile, and ride off into the distance.

Their mission may be over, but their adventure is only beginning.

You can watch the action-packed jeep chase right here:

In hindsight, the jeep chase in Metal Gear Solid feels a little dated, and not that exciting when compared to some of the similar gameplay sequences in today’s super advanced videogames. I mean, I couldn’t even count how many similar vehicle sequences I have played in games like Gears of War, Uncharted, or Call of Duty.

But this normalcy and commonality is one of the reasons the sequence is so revolutionary. This moment seems so common because it has been duplicated so much. For me, this type of gameplay started with this specific sequence in Metal Gear Solid. Every videogame since — be it the Convoy sequence in Uncharted 2 or the similarly structured motorcycle chase in Metal Gear Solid 4 — has borrowed heavily from this iconic and classic final chase.

At the time this sequence was pretty extraordinary. And for a doe-eyed videogame fan like me, the jeep chase absolutely floored me. I had never played anything like it or experienced something so exciting.

I was playing a movie. Simple as that. All of my favorite action scenes were being brought to life in a videogame.  A videogame I was in full control of.

But what made this scene stand out so much? What made it feel like the massive step forward I have always claimed it to be?

Metal Gear Solid is a fully interactive, endlessly impressive game from start to finish. Up to this point at the end of the game, the entire experience is full of some pretty incredible moments. The encounter with Psycho Mantis. The face-off with Sniper Wolf. The battle with Metal Gear REX. As amazing as all of these sequences are, they feel like videogames. And, more specifically, they exist in a static, centralized space.

Take all the boss battles in the game, for example. As amazing as they are (I mean, seriously, Psycho Mantis!) they still exist within the traditional environment of a videogame. They are in one room. They incorporate bookended cutscenes that are not only unplayable, they break up all the action.

Instead of being stuck in one room, playing one section before watching a cutscene leading to the next, the jeep scene combines multiple set pieces that are absolutely seamless.

Snake defeats Liquid and is reunited with Meryl. That is one beat.

Next, the gun fight begins as Meryl tries to start the jeep. Boom. Another beat.

The two jump on the jeep. They drive to a checkpoint. Snake shoots all the guards to move on. Boom. Boom. Boom.

And then the jeep chase begins.

When Liquid approaches in his jeep, the camera adjusts again. The entire time the player is in control.

All of these moments don’t stop. There is never any moment the gameplay pauses to show a cutscene (give or take a few seconds here are there). All the action seamlessly blends together, creating a nonstop, extended action scene that keeps adding on a new layer.

It can be argued that the actual gameplay in the jeep chase is fairly basic. And that would be true! You don’t do much except aim and shoot; you don’t even control the jeep for most of the sequence.

But that only serves to point out the sequence’s strengths even more. The overall feel of the scene masks the simplistic gameplay. The way the jeep rushes through the hallway. The way Liquid appears out of nowhere. The intense and dizzying dance the two jeeps do as they battle each other.

It all feels so exhilarating and urgent.

It seems that, nowadays, almost every single blockbuster videogame has a sequence like the jeep chase in Metal Gear Solid. And, admittedly, they are vast steps forward in technology and presentation. They have better graphics; they feature more complicated choreography; they are filled with more detailed action.

But being first goes a long way. As much as love all these new modern videogames, there will always be a special place in my heart for the jeep chase in Metal Gear Solid.

My heart races every time I think about it.