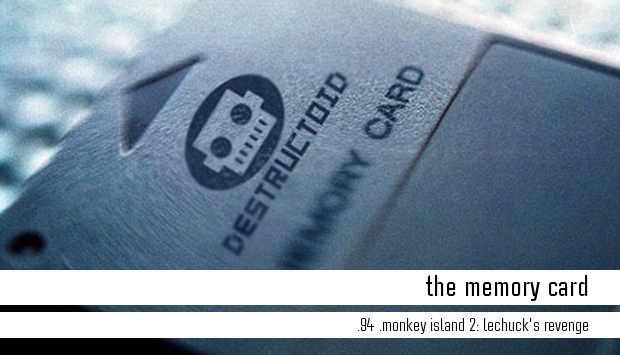 Death is a normal part of videogames.

And in the early days of graphic adventure games, death happened almost too much. It wasn’t surprising to see your main character either stabbed, burned, drowned, blown up, or squashed by some form of absurd danger in King’s Quest, Space Quest, or any of the other early Sierra classics.

But then LucasArts came along and changed the world of adventure games forever. In most of their games (with a few exceptions) you couldn’t die. And as interesting as this philosophy was, it came with little to no explanation. In a game full of danger and life-threatening situations, why couldn’t your character perish?

This lack of reasoning all changed with Monkey Island 2: LeChuck’s Revenge. In one notable sequence, the classic adventure game actually explains why main character Guybrush Threepwood can’t ever die.

And, my God, it is absolutely brilliant.

Monkey Island 2: LeChuck’s Revenge is arguably the best game in the revered adventure game series. And with good reason! Being the last game led by series creator (and one of my gaming heroes!) Ron Gilbert, the game is the perfect combination of tough adventure game puzzles and classic Monkey Island humor.

In the game, you play as main character Guybrush Threepwood, mighty pirate.

At the end of the first Monkey Island, Guybrush defeated the evil ghost pirate LeChuck and saved the fair maiden Elaine Marley. In an interesting twist, LeChuck’s Revenge (the game’s direct sequel), opens with Guybrush and Elaine in an odd situation.

Both are hanging from ropes above a huge, deep hole. From one hand, Guybrush is holding a giant treasure chest.

Elaine, annoyed with Guybrush, asks him how he got into this crazy situation. (The attitude between them proves something the player is not aware of has happened between the two. This is not the same Elaine and Guybrush that were in love at the end of the previous game!)

Guybrush, in his witty way, says it is a long story.

Elaine tells him she has time.

Guybrush sighs, and then begins to tell his story of how he ended up hanging from a rope, above a pit, with a giant treasure chest in his hands.

“Well, it all started on Scabb Island … “

With this, the game fades out to weeks earlier. Guybrush is sitting around a campfire with another group of dastardly-looking pirates. He is telling them the story of how he defeated LeChuck at the end of the first game.

With Elaine nowhere in sight, Guybrush further explains that he left her on Booty Island to set off on an adventure to find the legendary treasure Big Whoop and a ship to help him find it.

As he starts his quest for the treasure, Guybrush inadvertently gives away a piece of LeChuck’s beard, resulting in his mortal enemy being revived as a zombie. (Nice one, Guybrush!).

But in a fortunate coincidence, the only way LeChuck can be defeated this time around is by using the power of Big Whoop.

Determined to find the treasure now more than ever, Guybrush embarks on his epic quest to retrieve Big Whoop and defeat his ghost, er, zombie pirate rival once and for all.

Along the way, he meets up with a cartographer named Wally who helps him put together four pieces of an ancient map. An ancient map that will lead Guybrush to Big Whoop!

Unfortunately (does anything go right for Guybrush?), Wally and the map are taken by the zombie LeChuck. Dag!

Stowing away in a crate of voodoo supplies, Guybrush makes his way to LeChuck’s fortress, determined to rescue Wally and get back the map that will lead him to the fabled treasure.

It is here in LeChuck’s fortress when this week’s Memory Card moment occurs: Death is impossible.

After travelling though a confusing maze (seriously, how to people live in places like this?!), Guybrush finds the key to Wally’s cell.

As he reaches out and grabs the key, a cage falls from the ceiling and traps Guybrush.

LeChuck emerges from the shadows and gloats about his excitement over capturing him.

Without hesitating, LeChuck summons his first mate Largo. He instructs him to take Guybrush and Wally to the torture chamber.

From here, the game cuts to said torture chamber, with Guybrush and Wally strapped to a huge, complicated machine. Their arms are tied to chains; their bodies left uncomfortably dangling in the air.

LeChuck walks in and tells his prisoners what is about to happen to them.

In a hilarious monologue, the zombie pirate explains what the machine does. He points at a candle, saying that once it burns the rope above it, a bag will fall on a set of bellows. The bellows will shoot a single lead bullet, which will ricochet off a pan, then off two shields at the other side of the room, and finally popping a green balloon.

Once the balloon pops it will lower a lever, releasing a ratchet on a wheel, and lowering Guybrush and Wally into a glowing pit of acid beneath them.

With this, LeChuck leaves.

At this point, players have to act fast. After several minutes, the machine will activate and Guybrush and Wally will be dipped to their death!

To escape, Guybrush must spit into the shield, using its trajectory to extinguish the candle, allowing him and Wally to escape!

If this is not done in time, however, Guybrush is lowered into the acid, killing him.

But in an unbelievably genius twist, if this happens, the game cuts back to the scene from the very beginning, with Guybrush telling the story to Elaine, hanging over the hole.

“Horse hockey,” she awesomely says. “You honestly expect me to believe you were disintegrated in acid.”

Guybrush is at a loss for words.

Elaine then goes on to correct Guybrush, saying that if he had been killed in acid, he would not be alive, hanging from a rope in front of her.

Guybrush agrees that he may have embellished the story a little, and starts to tell that part of the story again, making sure to amend his error.

At this point the game returns to the beginning of the last scene, with Guybrush and Wally about to be lowered into the acid. The player is given another shot to complete the puzzle again without being killed.

Once successful, Guybrush and Wally make their escape, continuing their journey to find Big Whoop.

Eventually, the story lead Guybrush to the location of the mystical treasure and to the exact same moment the game starts with: Guybrush hanging over a hole, holding Big Whoop in one hand, and telling the story of how he got there to Elaine.

And, using the trademark sarcastic humor Monkey Island does best, Elaine looks at Guybrush with a straight face:

“That was the longest story I’ve even heard!”

You can watch what happens when Guybrush “dies” right here:

I love this sequence for so many different reasons.

Okay, now back to the business at hand.

This moment is easily one of my favorite moments in an adventure game. It all comes down to remarkably clever design and absolutely stellar writing.

Setting the game up as a giant flashback has been done before in many movies, television shows, and even videogames. While still a refreshingly creative narrative structure, it is nothing that out of the ordinary. As the game progresses, it becomes pretty obvious that the story will eventually lead to the moment at the very beginning.

But then the scene in the torture chamber happens.

Now, as mentioned at the very beginning of the article, LucasArts was in the business of creating games where you couldn’t die (with a few exceptions). Knowing this, it was a fair guess that Guybrush would never perish in Monkey Island 2.

But as you work through the torture chamber, you realize it is a distinct possibility that he may meet his end. For the first time in the game, this set piece offers a time limit, which is unlike most sections in LucasArts games.

When you don’t complete the puzzle in time, Guybrush and Wally really do descend into the vat of acid. “Ahhhhh, I didn’t save my game!” you think to yourself.

But then the brilliant twist happens.

Of course Guybrush can’t die! The entire game has been a flashback! That would make no sense. GENIUS!

To top it all off, Elaine’s reaction to Guybrush’s death is priceless. She doesn’t reel back in shock or confusion. She dryly remarks that he must be mistaken. His story makes no sense and he must be telling it wrong.

In a way, she is speaking for the audience, who may be wondering exactly why and how this is all happening.

The inability to die in many LucasArts adventure games is similar to “invisible walls” in other videogames. Both succeed as useful mechanics for keeping the player focused on one specific way of playing, but not without a complete sacrifice of logical explanation.

With this one moment, Monkey Island 2 not only offers a reason to why Guybrush can’t die, it does so in a unique and very memorable way.