At first glance, the Mario games exist in such a pleasant, colorful universe. Smiling clouds watch over the land with nothing but love in their soft, fluffy hearts; stars with bushy gray moustaches fly through space, laughing and playing while they make wishes come true.

Even the “villains” of the world don’t ever do anything horrible. Sure, kidnapping a princess is nothing to take lightly, but Bowser and his adorable minions are no more harmful than a rotten school teacher who randomly slaps your knuckles with a ruler from time to time.

But looking past the candy-coated exterior, there are some shockingly dark moments that cast their shadow over the Mushroom Kingdom. Dark moments that would even make Frollo from The Hunchback of Notre Dame gasp.

And, surprisingly, one of the darkest comes from the heroic Mario himself.

Super Mario World is an unbelievably solid game. Released as a pack-in with the Super Nintendo (remember those days?), the classic platformer is still one of the best-designed 2D games ever created, even all these years later. 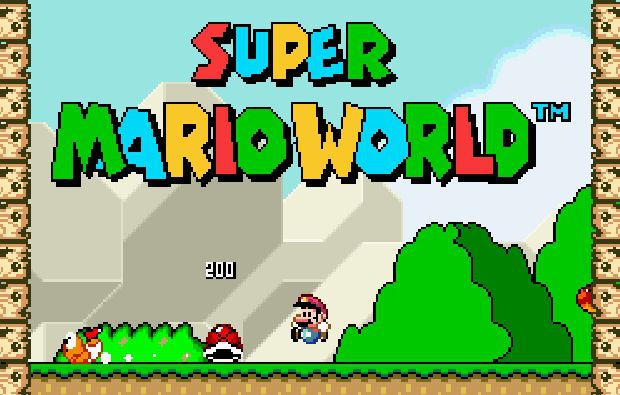 In the game, you play as Mario, the iconic overall-wearing plumber and arguably the most recognizable videogame character of all time.

In the vein of the original Super Mario Bros. and especially Super Mario Bros. 3, Super Mario World continues the adventure of Mario as he travels through seven beautifully-constructed worlds to save his beloved Princess Peach from the claws of the grumpy Bowser. 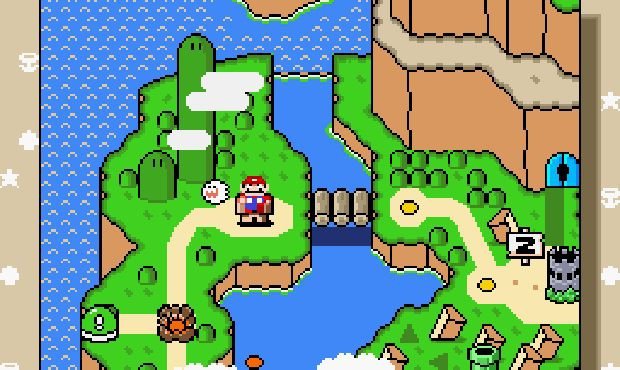 And like the other games before it, Super Mario World’s gameplay consists of Mario jumping through 2D levels, collecting coins and various power-ups.

But in a first for the series, Mario can proceed through most of his levels with a new loyal companion.

That loyal companion is Yoshi. 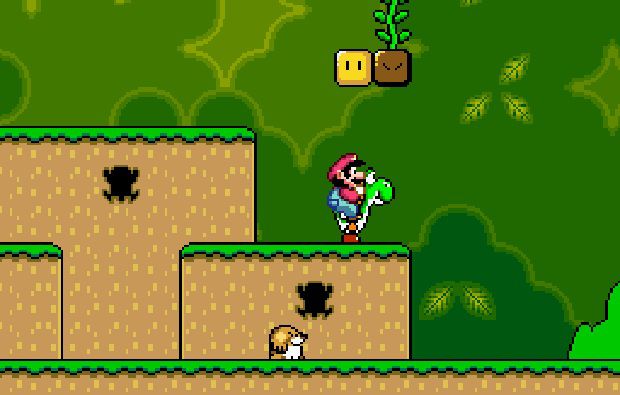 On the second level of World 1, Mario enters a lush, green forest covered with various-colored berries.

After passing a few enemies and obstacles, he reaches a small set of question mark blocks.

Familiar with these from his first adventure, Mario immediately pounds them from below (hot?), excited to see what treasures he will find waiting inside.

To his surprise, one of the question mark blocks contains a white egg with green spots. 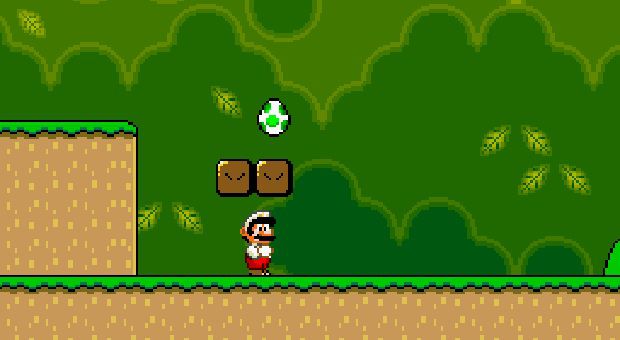 Before he even has a chance to react, the egg hatches and a green dinosaur pops out.

This adorable, loyal dinosaur — Yoshi, as we all have come to know him — wants nothing more than to help and serve Mario on his quest. (He is even born with a saddle already on his back, for crying out loud!)

Mario, grateful for the support, immediately hops on the back of Yoshi’s saddle. The two form an immediate bond and start traversing the rest of the level right away.

Aside from being, well, awesome, Yoshi helps out Mario in many different ways. He can extend his tongue to eat almost any enemy that is in front of him; he defends his new friend by taking damage for him, therefore preventing Mario from losing his Mushroom power after being hit. 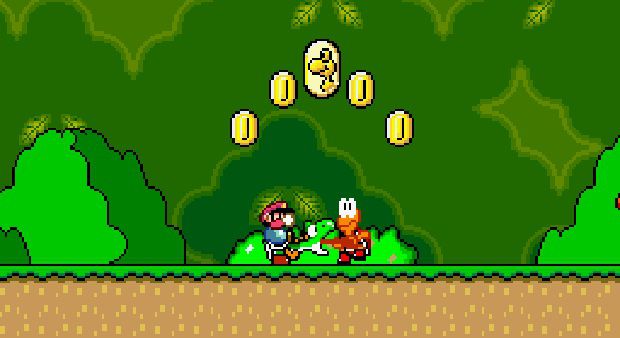 And while Yoshi panics after being attacked by running and shaking, Mario is always there to calm him down and save him from whatever danger lies ahead.

The two are best friends.

But as the game progresses, Mario begins to learn more about what Yoshi has to offer.

By swallowing certain turtle shells, Yoshi becomes ridiculously powerful. A red turtle shell, for example, grants Yoshi the power to shoot fire. A blue one even lets Yoshi fly for a limited time!

With the power only a saddle hop away, Mario begins to think of other ways he can use his friend Yoshi to his advantage.

This is when things start to turn dark. Very dark.

And this is also when this week’s Memory Card moment occurs: Sacrificing Yoshi.

One of the moves Mario learns is the ability to leap off of Yoshi.

While seemingly not that special, this move proves vital in helping Mario on his adventure.

Yoshi has a pretty high jump on his own, but by combining the dismount with the normal jump, Mario can almost double his height and reach areas otherwise unreachable. 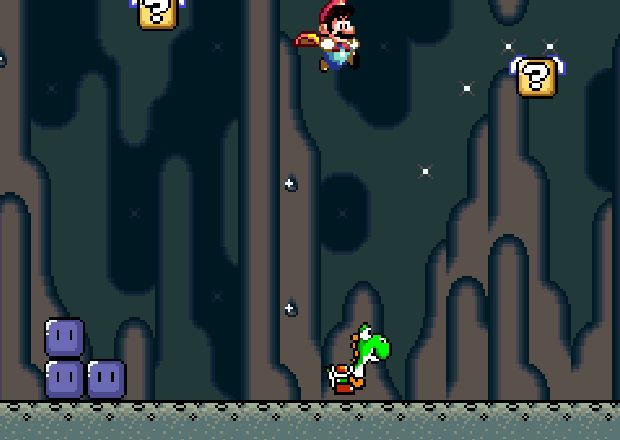 While Mario still shows a huge love for Yoshi, he starts thinking about the Princess, trapped in Bowser’s castle.

What would he do to save the Princess? How far would he go?

As Mario travels with Yoshi through more worlds, getting closer and closer to his goal, he starts to think about Yoshi as more of a tool than a best friend. 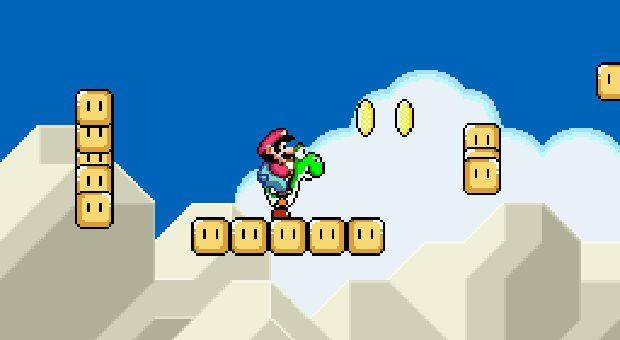 Mario begins to make his way through a tough level on Yoshi’s back — one filled with bottomless pits and countless enemies.

The loyal dinosaur does his best to help his new friend in any way possible. He leaps from platform to platform, eating enemies and spitting them out.

He will do whatever it takes to help Mario rescue the beautiful and surely lovely Princess.

His eyes slightly squint as if he is thinking of something. Something devious.

With the grace of a reptilian gymnast, Yoshi leaps through the air, trying his best to land on the skinny platform.

Mario looks ahead and sees the end-of-level gate. He focuses in on it, not realizing where he is or what he is doing.

This slight moment of distraction throws Yoshi off. He loses a little momentum on one of his jumps.

In a tragic turn of events, Yoshi misses the platform in front of him and starts to plummet into a bottomless pit.

Mario, focused as ever on the goal ahead of him, realizes there is only one thing he can do. One thing he has to do.

Without even hesitating, he leaps off of Yoshi and lands safely on the platform in front of him.

Yoshi looks up at his friend as he falls. A tear forms on the edge of his precious dinosaur eyes.

His friend has abandoned him.

As Yoshi falls, he remembers the good times he and Mario had together.

He remembers that second level in World 1, when he was nothing but an egg.

He remembers the first berry he and Mario shared.

He remembers waiting for Mario in front of their first Ghost House.

But now none of that mattered.

He was now falling into a bottomless pit as Mario stood safely above, not even looking back to say goodbye.

But instead of hating Mario, Yoshi smiles one last time. He is just happy his friend is safe and free to continue his journey to find the Princess.

With his last moment in the Mushroom Kingdom upon him, he finds solace in knowing that his sacrifice will only help Mario.

Mario. His first and final friend.

In one of the darkest things you will ever see, you can watch an entire level designed around sacrificing Yoshi right here: (Oh, the humanity!)

Okay, raise your hand if you have ever sacrificed Yoshi to save Mario from dying before.

Yes, that’s right: I have done it as well. Numerous times.

But, really, who hasn’t? It is part of the experience of playing Super Mario World. It is one of those memorable videogame moments that no one ever seems to talk about … but everyone relates to. (Kind of like jumping through the boss doors in Mega Man … BUT WITH MORE HEARTLESS MURDER!)

But does that make it okay?

True, making a big deal about this notorious moment is a little absurd, but think about what you are actually doing for a second. You are sacrificing your adorable, completely loyal partner just to help Mario get an extra boost.

HANG YOUR HEAD IN SHAME!

Okay, obviously I am kidding.

Exploiting this move is nothing malicious. The very ability to mount or dismount Yoshi at anytime is bound to lead to stuff like this happening. As a player, it is natural instinct to do whatever it takes to avoid falling into a bottomless pit.

If you miss a jump, hitting all the buttons and tying to survive is only a common reflex.

Surely the sweet, innocent designers at Nintendo would never have done something like this on purpose. They never would force the player to sacrifice Yoshi in order to complete the game, right?

WATCH THIS HORRIFYING VIDEO BEFORE ANSWERING THAT QUESTION!

Yes, it’s true. To reach the secret exit on the Cheese Bridge level, players are required to float with Yoshi under the first end-of-level gate and quickly sacrifice the misunderstood dinosaur to make one final leap to safety.

Admittedly, it is possible to reach the secret gate in the Cheese Bridge level by flying with a cape (sans Yoshi) and pulling up at the perfect moment … but no one does it that way. The only way to really do it is to jump under the first gate and sacrifice Yoshi to reach the hidden area.

We should all be ashamed.