Have you ever played a videogame that you liked — but didn’t love — only to encounter a sequence that is so creative and well-designed it makes you wish the entire game contained more memorable moments like it?

When this happens, how do you react? Does it make you appreciate the game as a whole more for including such a great sequence … or does it just point out the potential of what the entire game could have been?

For me, it’s a healthy mixture of both.

A really good example of this is in Grand Theft Auto IV. The most recent Grand Theft Auto is not terrible by any means (it is actually pretty good!), but the inclusion of one mission in particular manages to both elevate the game and slightly diminish the overall experience by comparison.

I still have purchased (and liked!) them all, but it seems I buy them because of a sense of duty rather than a genuine excitement about what I will be playing. Lucky for me, Grand Theft Auto IV turned out to be pretty good. The game has great characters, and that city — my God, that city! — is absolutely stunning, filled with tons of detail and a ridiculous amount of things to do. 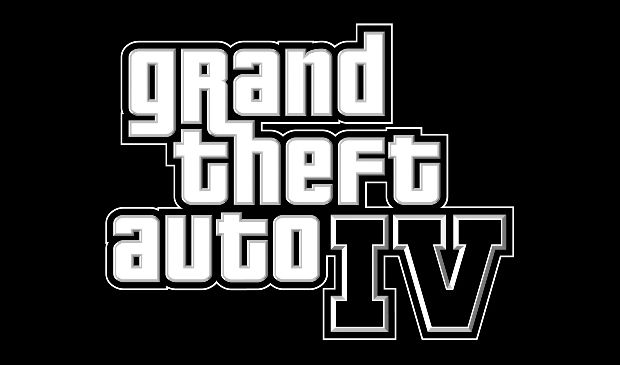 In the game, you play as Niko Bellic, a veteran from Eastern Europe who comes to Liberty City to pursue the “American Dream.” Unfortunately for him, this American Dream comes with the cost of doing some very bad things. 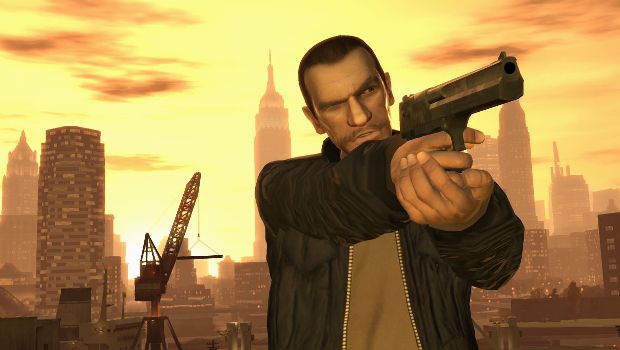 At the very start of the game, Nico meets up with his cousin Roman, a fan favorite and easily one of the best characters in the game (“TITTIES!”). To say Roman is in over his head would be an understatement. Drowning in debt and the target of many violent loan sharks, Niko is forced to protect Roman on many occasions.

Eventually, the two are kidnapped by a gang and brought to a man named Mikhail Faustin. 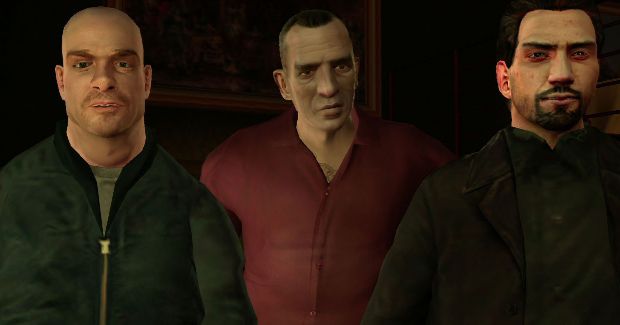 Instead of killing them, though, Faustin is impressed by Niko’s actions in defending his cousin and hires him to do a series of dangerous jobs for him.

While performing these jobs, Niko meets a series of characters: some good, some bad, and some really bad.

One of these shady characters is crooked Deputy Police Commissioner Francis McReary. 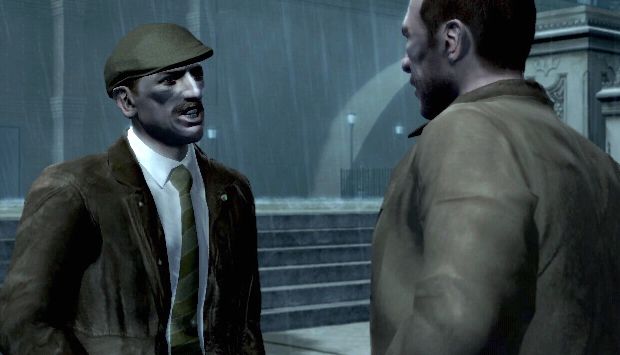 McReary sends Niko on many missions to “take care of” people he doesn’t want to deal with anymore. Most are the leaders of gangs or notorious drug dealers, but, regardless of who they are, McReary obviously crosses the line by taking the law into his own corrupt hands.

Despite agreeing to help him, Niko knows what he is doing is not right, but at this point in the game he will do whatever it takes to reach that American Dream he so desperately wants. And if killing a bunch of bad people for a bunch of other bad people is what it takes, he is willing to make that sacrifice. 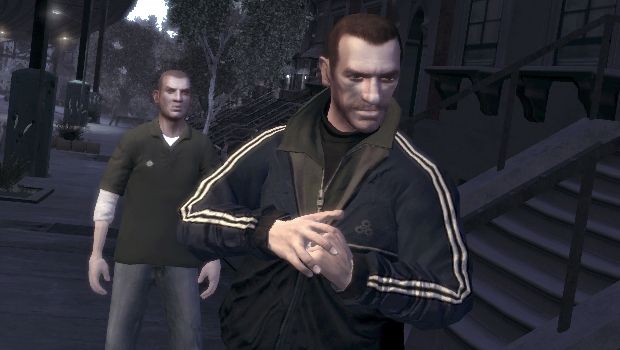 After completing a few missions for McReary, the shady cop gets frustrated with Niko for not doing everything exactly as planned. To remedy this, he offers Niko one more job to make up for all of his unintentional shortcomings.

McReary asks Niko to head to the apartment of a drug dealer … and kill him.

It is on this mission when this week’s Memory Card occurs: A sniper rifle and a telephone.

Like most missions in Grand Theft Auto IV, Niko is tasked with hotwiring a car and driving to his instructed location. 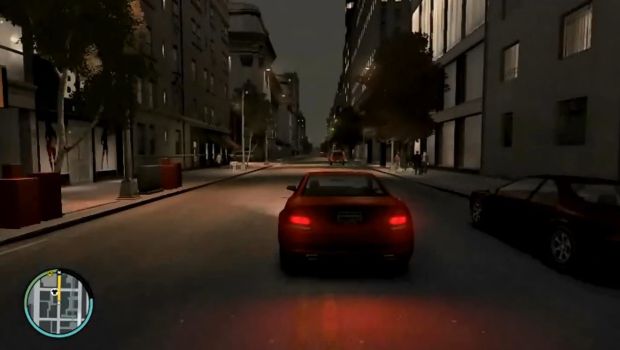 In this specific mission (entitled “Lure,” which Niko and the player will soon understand), Niko is also asked to pick up a sniper rifle from the back of a car before he proceeds to his destination.

As he pulls his (stolen) car up in front of the building, McReary calls him on his cell phone. He instructs Niko to go to the roof of the building opposite of the drug dealer’s apartment.

The loyal hire that he is, Niko makes his way to the roof of the apartment across the street from the dealer, sniper rifle in hand. 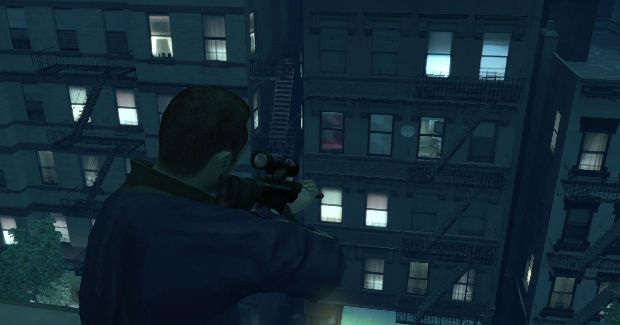 When he reaches the roof, Niko realizes the drug dealer cannot be seen in his apartment. He is there, but sitting on his couch and out of view. 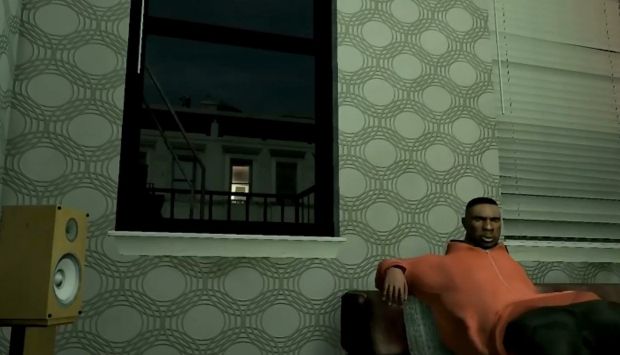 Niko calls McReary, who instructs him to figure out a way to lure the target into the open.

This is when Niko has to use his brain.

How is he supposed to lure the drug dealer into his sniper rifle’s sights?

Niko looks around the building. There is no way to jump over to the other apartment — it’s too far! And even if he could do that, the drug dealer would hear all the ruckus and run away. Mission failed.

Niko needs to figure out a way to get the dealer’s attention without him noticing that anything is out of the ordinary.

Lucky for him, his sniper rifle has a sight with a very powerful zoom.

He peers through the gun, zooms in across the street, and surveys his surroundings. 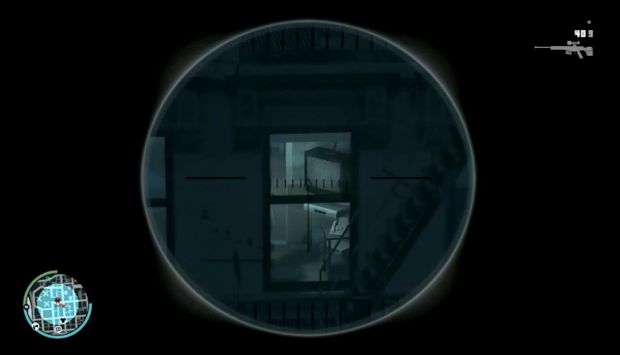 The dealer’s apartment is filled with normal things one would find in an apartment: A bed, a television, a stereo, a telephone.

Maybe Niko could use that to his advantage …

At this point, the player can zoom in on the telephone’s digital display. By looking very closely (and carefully), the number of the dealer’s home phone can be seen on the digital screen. 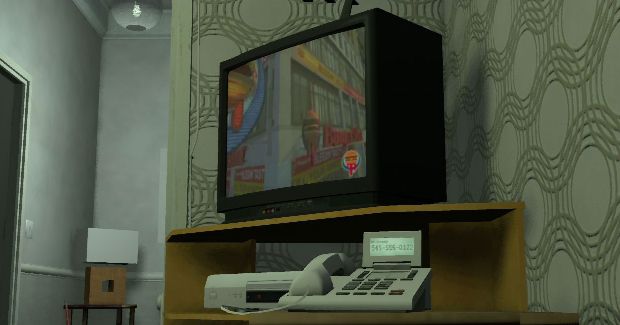 Using this information, Niko pulls out his cell phone and dials the number.

After a slight pause, the home phone inside the dealer’s apartment rings.

The dealer stands up from the couch, walks over to answer the phone, and steps right into Niko’s sights. 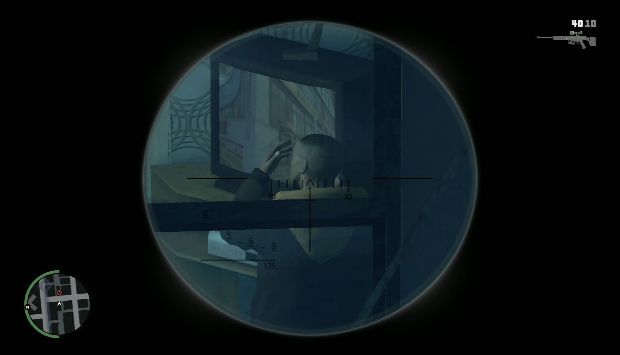 Niko takes a deep breath, aligns his crosshairs over the drug dealer’s head, and pulls the trigger.

With an explosion of red, the drug dealer falls to the ground … dead.

You can watch the entire “Lure” mission here:

I love this part of Grand Theft Auto IV.

Granted, it is a very short mission in a gigantic overall experience, but it is easily the most creative and inspired part of the entire game.

As epic in scope as Grand Theft Auto IV is, most of its missions fall into the tried and true tradition of what Grand Theft Auto missions are all about: mainly, traveling to a new area, shooting up some thugs, and driving away — sometimes casually and sometimes while being chased.

The “Lure” mission has the same format as most of the other missions in the game, but adding in the remarkably clever twist about figuring out a way to distract the drug dealer takes the entire mission to a brand new level.

Grand Theft Auto is not known for its puzzles, but this one sequence really involves a lot of outside thinking to figure out what to do next.

And once you figure out you can call the number on the phone by zooming in and discovering it for yourself, it is extremely satisfying.

Even cooler, calling the phone number is not the only way to distract the drug dealer!

As you can tell while playing the scene, the dealer is watching TV while sitting on his couch. By shooting the satellite dish outside his window, the television goes out and the dealer walks over to see what is wrong.

At this point Niko can also shoot him, just like he would if the dealer had answered the phone.

But doing things this way leads to a few unfortunate problems with this sequence.

One of the reasons I love using the phone to call the drug dealer is because of its relative realism and clever use of the environment. If the dealer was sitting at home and his phone rang, he realistically would get up to answer it. It just makes sense!

But after shooting the satellite dish, would the drug dealer — someone who is obviously aware of and nervous about potential gunfire — really walk in front of the window to see what is wrong? I am no drug dealer, but I would think a gunshot and subsequent explosion would send me running!

Similarly, Niko can also flat-out shoot the television to have the drug dealer walk over and check out what is wrong. But, again, a bullet through the television would most likely result in a different reaction from a real drug dealer.

Another small issue: If the player is confused as what to do and looks around for a long period of time without doing anything, McReary will actually call Niko on his cell phone and just simply give him the phone number of the drug dealer.

No, Rockstar! Have more faith! It is so much more satisfying for the player to figure these puzzles out on their own!

But despite these negative thoughts, the “Lure” mission in Grand Theft Auto IV is still pretty impressive. It is possible to not even experience any of these downsides, so they are all minor complaints in a sequence that is surprisingly creative and ultimately very refreshing.

And the fact that you even have multiple ways of luring the drug dealer into the sniper rifle’s sights is a definite positive! The more choice and options for the player in a game like this the better!

While many big-budget videogames are starting to sacrifice originality for superior technology, it is nice to see glimpses of clever, intelligent, and unique game design pop up in the most unlikely of places.

And just imagine: If every mission in the game was this creative, what would the entire game have been like?

Maybe we already have our answer …