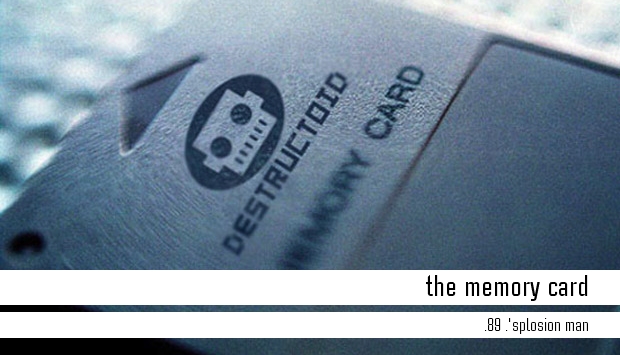 One of the great things about videogames is how absurd they can be. Whether this absurdity is intentional (Noby Noby Boy) or unintentional (“All your base are belong to us!”) it’s always nice to see games that aren’t afraid to be ridiculous.

While movies and television have a stricter reliance on sticking to a somewhat cohesive narrative, videogames have the luxury of throwing normalcy out the window and offering something that can only be found in the world of gaming.

Even better, these absurd moments are even more wonderfully insane if they appear in a game that is otherwise fairly traditional.

A perfect example of this is in the semi-recent Xbox Live Arcade hit ‘Splosion Man. The entire game (a classic platformer) is full of humorous moments, but an extended sequence at the end of the game is absolutely ludicrous and will go down in history as one of the oddest and most amazing videogame moments I have ever experienced.

Even though it’s already a couple years old, ‘Splosion Man is still one of my favorite Xbox Live Arcade games to date. In fact, it’s even one of my favorite 2D platformers of all time. The game is just really well-designed, really fun to play, and really, really entertaining.

In the game, you play as the titular ‘Splosion Man, a fiery, explosive experiment gone wrong.

Created in the laboratory Big Science, the game starts with ‘Splosion Man escaping from his prison. Happy to be free, ‘Splosion (I am calling him this for the rest of the article as his full name is a chore to type!) wreaks havoc throughout the lab in order to find a way to escape.

The game is a blast (no pun intended), and possesses a sick and rather twisted sense of humor throughout.

For example, if ‘Splosion explodes next to one of the terrified scientists franticly running around the lab, their bodies will burst into a shower of flopping meat. It is rather gross, but weirdly satisfying, and, honestly, funny every time. 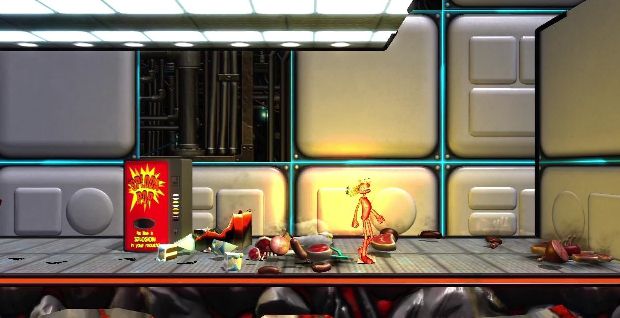 While traveling through the games increasingly brilliant and challenging levels, ‘Splosion is also tasked with defeating three towering bosses.

Each one is very well-designed and fills the entire screen. 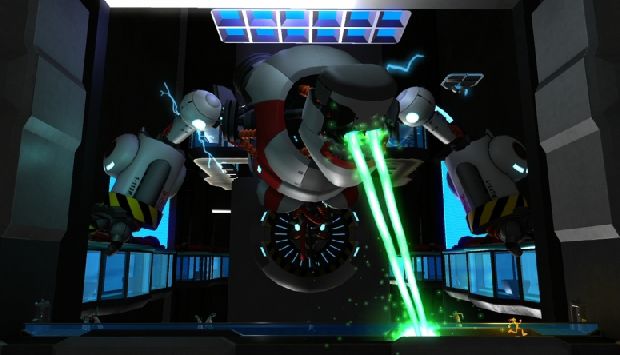 At the very end of the game, as ‘Splosion is on the verge of escaping the facility, he faces the final boss: A giant, meat-covered, lizard-like creature that is as terrifying to look at as he is disgusting.

It is during this final boss battle when this week’s surreal Memory Card moment occurs: MEAT ‘SPLOSION!

Even though the final boss in ‘Splosion Man looks crazy, he is defeated in a rather traditional manner. By memorizing his patterns, ‘Splosion must get the boss to smash his fists down onto huge orange panes of glass found on both sides of the room. 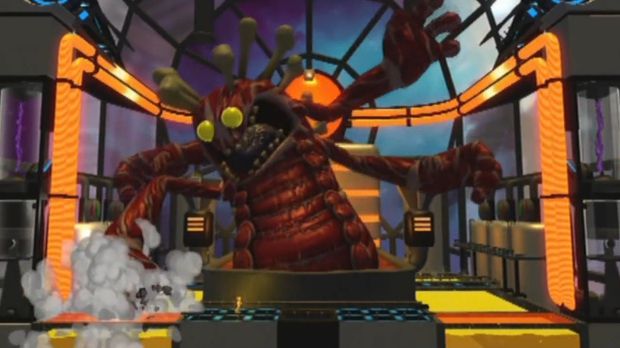 Once his hands hit the glass three times, the panes shatter, forcing the massive enemy’s fists to plunge into the hot liquid below. After this happens, the boss pulls out his now-burned-to-a-crisp hands and places them in front of his mouth. 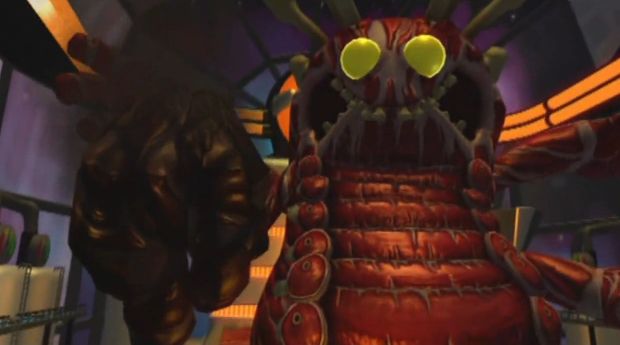 The boss, being absolutely insane, smells his cooked meat hands, immediately bites them off, chews them into little pieces, and swallows.

To ultimately defeat the boss, ‘Splosion must repeat this process for all of the enemy’s four arms.

Once his first two arms are gone, ‘Splosion must explode next to the boss’s face, blinding him and forcing him to thrust his final two hands into electricity-filled tubing on the side of the room. 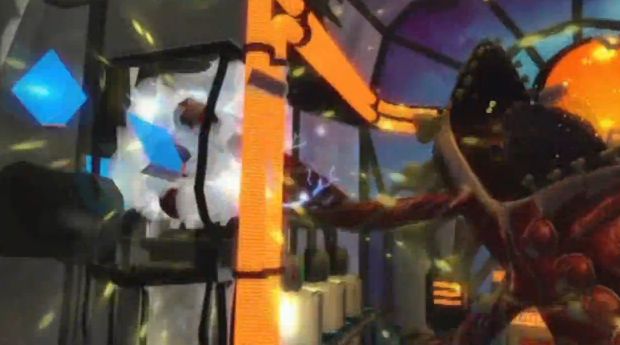 Again, this burns his hands, turning his appendages into a tasty snack for the self-mutilating monster.

Once all four arms are gone, one final maneuver is needed to put the boss to an end.

Armless and completely blind, the final boss leans forward in absolute exhaustion. He lets his giant, blistered tongue fall out of his mouth. 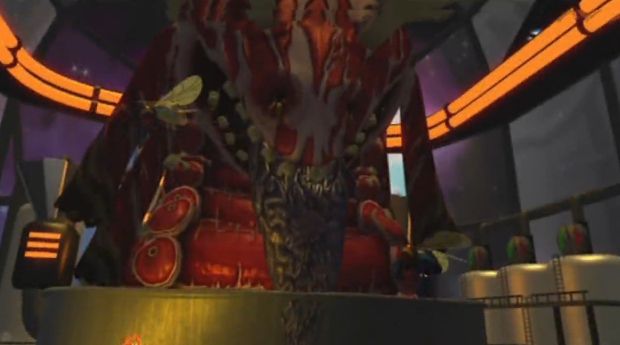 With his mouth open, ‘Splosion leaps inside the belly of the enormous beast.

At this point, the player has to make ‘Splosion explode over and over again as fast as possible. 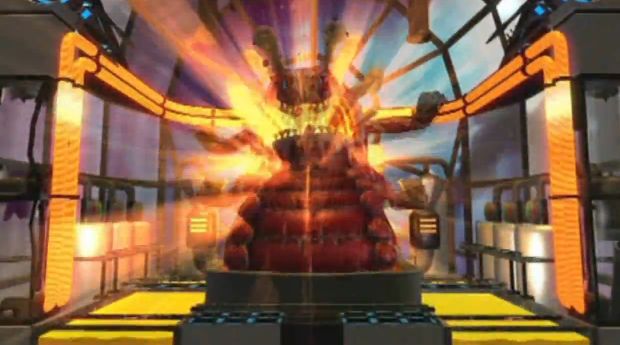 The boss writhes around in pain, pieces of the meat covering his body fly in all directions.

And, then, as if out of nowhere, something strange happens.

The scene immediately jumps away from the boss action to a shot of a boy lying on a carpeted floor reading a book. 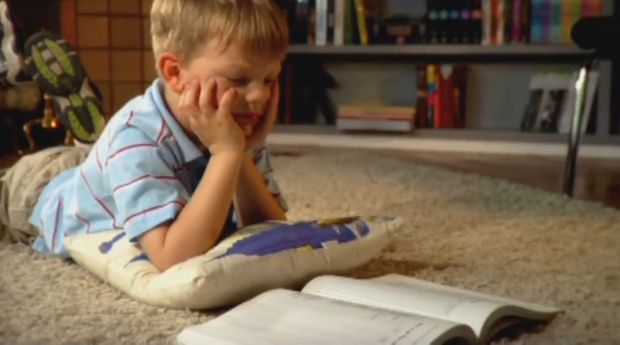 And the shot is not created using in-game graphics. It is an actual real world shot using a real-life actor.

As the boy quietly reads, a giant slab of cartoony meat falls from the sky onto the child’s book.

It lands with a gross squish.

The boy giggles and smiles at the camera. A cheesy sparkle emits from his white teeth. 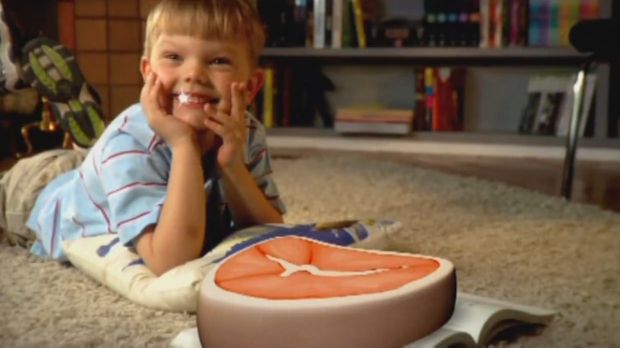 The action then cuts back to ‘Splosion exploding inside the boss’s belly. The player continues to hit the button on the controller as fast as possible.

Again, the scene cuts to another real world shot. This one involves two men playing chess. Another cut of meat slaps onto the table, knocking over their chess pieces. 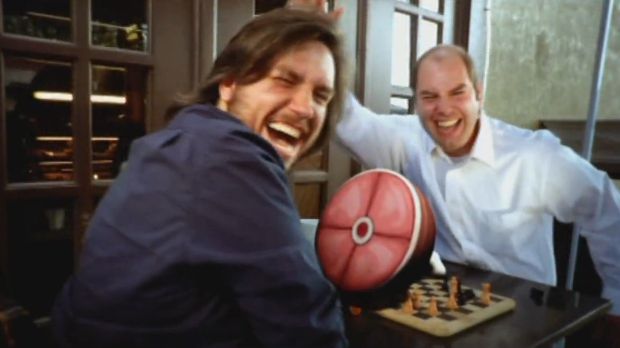 The next montage of events repeats this pattern over and over again: Flashes of in-game footage of ‘Splosion exploding inside the boss’s body, cut together with increasingly random scenes set in the real world.

A dog being surprised by a piece of falling meat; a cute couple laughing as a shower of hot dogs surrounds them.

Each real world shot is more surreal and wacky than the one before it. 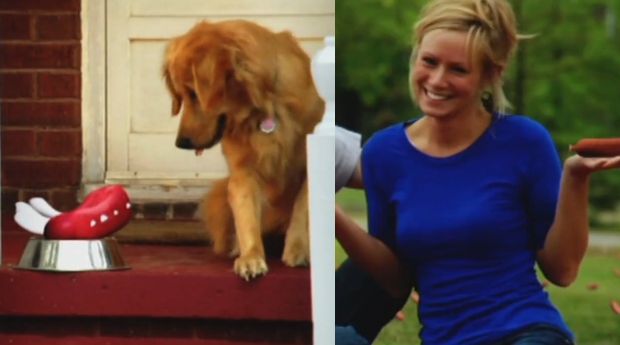 Finally, after this goes on for minutes, ‘Splosion finally defeats the boss. He is engulfed in a white light and is destroyed once and for all. 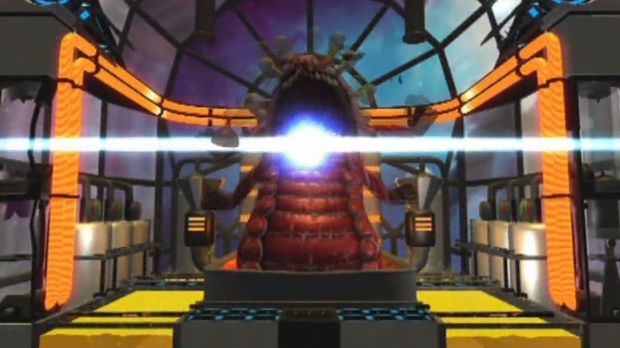 As if all of this wasn’t absurd enough, the closing credits then begin.

Next to all the hardworking people’s names scrolling by, a crazy song begins to play, accompanied by a man in a ‘Splosion Man outfit running through the real world streets, kicking and punching random photos of young girls, and, I can only guess, people that worked on the game at development studio Twisted Pixel. 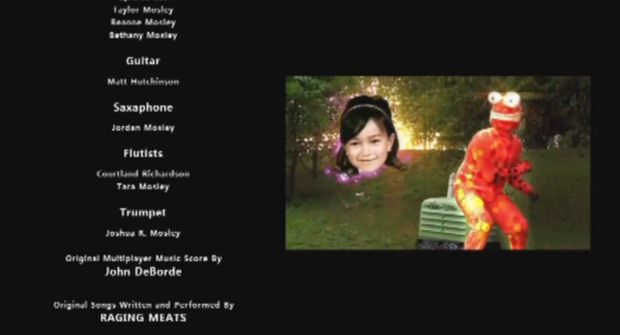 As the last credit rolls, the logo of the game explodes in a blast of fire as the screen finally fades to black.

You really need to see the final boss battle and end credits sequence to believe it. So you can do that right here:

Compared to some of the more moving and heartwarming moments that have been featured on The Memory Card in the past, this is obviously one of the least emotionally touching. (Unless, of course, the destruction of a giant murderous meat monster breaks your heart.)

But the lack of emotional impact doesn’t make it any less memorable.

In fact, I would go so far as to say the final sequence in ‘Splosion Man is one of the most energetic and inspired videogame endings in recent memory.

There is a fine line between hilariously absurd and obnoxious, and, honestly, Twisted Pixel did cross that line a couple times in their most recent game, Comic Jumper.

But with ‘Splosion Man, the absurdity just works perfectly. It never feels too out of control to be annoying, but is also insane enough to be genuinely funny.

What I think really helps — and also makes this ending sequence of events so effective — is that the majority of ‘Splosion Man is not really designed around being “wacky” or “hilarious”. Sure, there are big laughs throughout the game, but the game is first and foremost a 2D platformer — and a really well-designed one at that!

With Comic Jumper, the game almost tries too hard to be funny throughout that it kind of loses some of its solid gameplay in the process.

But I am not here to criticize Comic Jumper (I still like that game a lot!). But the comparison helps to understand what makes ‘Splosion Man work so well.

‘Splosion Man is just a really solid game with a very humorous tone to compliment the stellar gameplay. Even the final boss — as crazy-looking as he is — is, at its core, just a really well-paced and challenging final boss fight.

So when you are about to defeat the boss and the game all of a sudden cuts to a random sequence of events showing real world actors being attacked by digital pieces of meat, well … it is rather shocking, to say the least.

The first time this happened to me I really didn’t know what was happening. It made no sense to me! Heck, it still doesn’t make any sense to me.

But it is so absurdly awesome that I can’t help but smile every time I experience it.

I am not here to clear my throat, push up my glasses, and obnoxiously break down why the comedy works (I don’t even think I know!), but I can tell you that the reactions from the actors are what make this sequence so damn funny. One particular chuckle-inducing moment is the priceless facial expressions (and accompanying poorly dubbed sound effects) of the couple having a picnic in the park.

I mean … what the heck? HA! It makes me laugh even typing about it.

Is this ending sequence completely pointless and a little dumb? Oh, definitely! But give me pointless and dumb any day if it results in something so refreshingly creative and absolutely insane as the ending of ‘Splosion Man.

I love it so much.