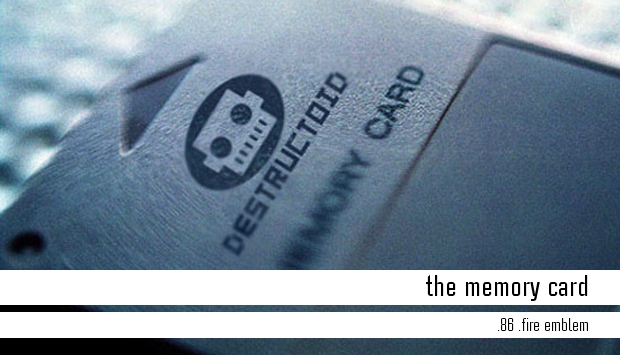 We all know the way it works. You play through a level in a videogame, encounter an unexpectedly hard section, and your main character plummets into a bottomless pit … or is singed by a giant dragon … or is blown up by a nearby oil drum. Whatever the morbid descriptor, your character dies.

As unfortunate as this is, it doesn’t really matter in the long run. If you have another life, you can just try the level all over again. And in more recent games, you don’t even have to have another life — you can just return to a close checkpoint and tackle the foreboding obstacles one more time!

This unrealistic take on life and death is nothing more than a videogame fantasy, but one that allows the player to fully enjoy the game and learn from their mistakes.

But one game changed this traditional depiction of videogame death forever. Fire Emblem on the Game Boy Advance (and originally as a Japan-only release on the NES!) didn’t offer players such a generous option when a character died. In fact, its main gameplay twist was downright tragic.

It took a long time, but the Fire Emblem series finally made it to North American store shelves on the Game Boy Advance in 2003, more than ten years (and six iterations!) after the original game hit the original NES in Japan in 1990.

But the wait was worth it.

As someone who was a little overwhelmed by grid-based strategy games, I shied away from playing Fire Emblem when it was released on the Game Boy Advance. But once I did it completely changed my life. I feel instantly in love, still ranking the series as one of my favorite of all time. 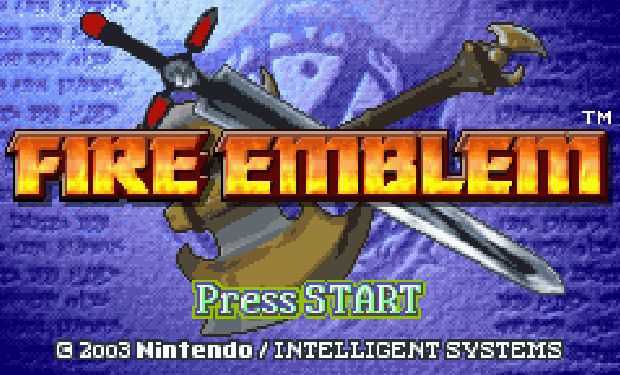 At the start of the game, you play as Lyn, one of three main characters that appears in Fire Emblem.

Lyn is a brave, green-haired girl that lives on the Sacaen Plains with her tribe, the Lorca. Right before the beginning of the game, Lyn’s parents are murdered, along with the entire rest of her tribe.

Devastated and alone, Lyn finds an injured tactician lying on the ground near her home. Wanting to avenge the death of her entire family, Lyn accompanies the tactician to train her sword skills and learn more about who killed her tribe. 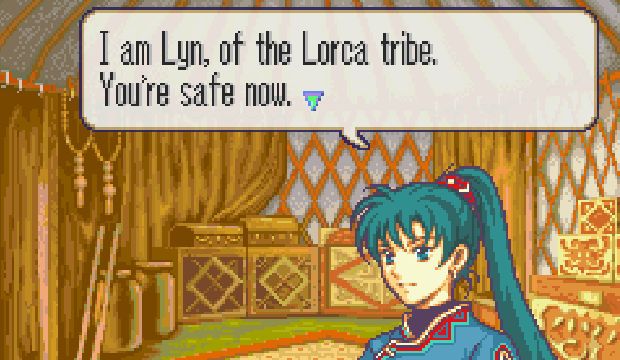 This is the very start of Fire Emblem and opens the game’s first chapter.

For anyone unfamiliar with the series, Fire Emblem is a turn-based tactical role-playing game with gameplay taking place entirely on a grid (just like Final Fantasy Tactics, Advance Wars, or other games of similar type).

After moving all your characters along this grid, the enemy takes a similar turn, moving all of its characters.

This back and forth continues until one side accomplishes its goal. Either you complete the mission at hand, or the enemy prevents you from finishing this goal, usually by killing everyone in your party.

Over the course of many incredible chapters, Fire Emblem follows Lyn as she meets dozens of different characters, each one playable and possessing skills completely unique to him or her.

For example, archers are weaker than warriors, but can attack from farther away on the grid (as opposed to on the space directly next to your enemy). Magic-users possess a similar long-range skill.

While simple enough to be appealing to non-tactical role-playing fans (like I used to be!), once the game opens up it becomes a refreshingly complex and satisfyingly deep RPG.

As more and more characters are acquired in the game (some completely optional!) they are seamlessly woven into the story. And like any good tale starring a large cast, some of these characters start to become favorites. As a player, you find yourself selecting certain characters to do battle more often than others, partly because they are strong, but mainly because, well, you start to care for them. 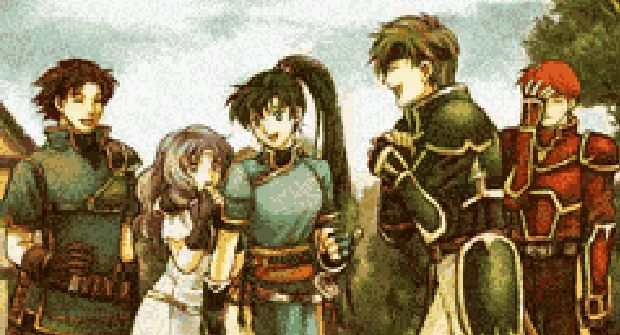 As Lyn and friends embark on a journey that starts personal but becomes of world-saving importance, they are faced with many hard battles with increasingly tough foes.

And like in any role-playing game, one wrong move or an extra challenging foe can end in one of your characters dying.

Usually this wouldn’t be such a big deal. Just use some kind of potion or spell to bring your character back to life, try again, and move on.

Once one of your characters die, this week’s Memory Card moment occurs: Death is final.

You can already tell by the name of this week’s Memory Card, but when one of your characters dies in Fire Emblem, it is over. No second chances.

Once they die they are gone for good.

As Lyn and her friends journey through the game, each move they make is of utmost importance. 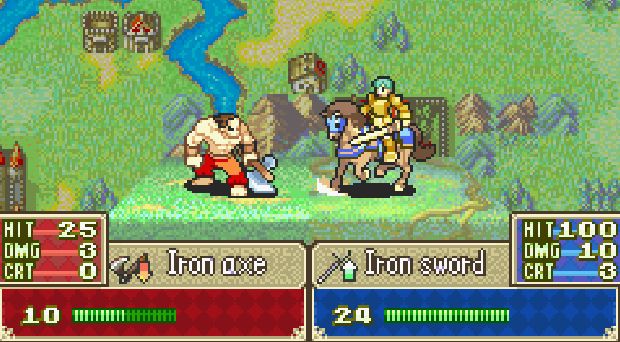 The party takes extra precaution as they continue their quest to save the precious world around them.

They make sure not to leap into battle unprepared.

Their battle is a real life struggle between life and death.

In one instance, for example, a young female Pegasus Knight named Florina is called into battle. She rides a mighty winged beast and is very skilled with a lance.

What makes Florina so useful is her speed and ability to travel long distances on each turn.

By flying on her Pegasus, she is able to travel across all types of terrain and spring surprise attacks on the most unlikely of foes.

In addition to her skill on the battlefield, Florina is also one of the game’s most sweet and innocent characters. A Pegasus Knight-in-training, Florina is the youngest of three, highly honored sisters, both of them Pegasus Knights as well.

Florina is shy and quiet, but never hesitates to help out her friends in need. 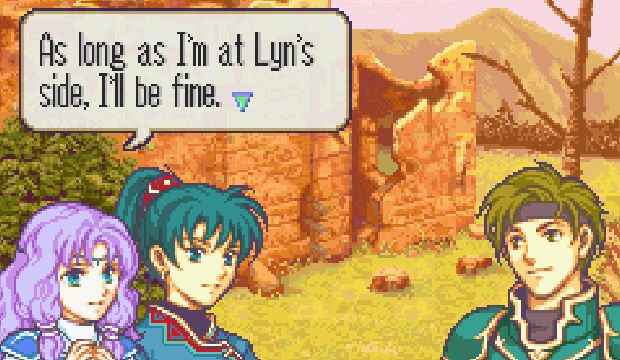 In fact, she is so loyal and brave, that Hector, one of the game’s main characters, falls in love with her. By fighting along his side throughout the game, it is even possible to see Florina and Hector get married in one of the game’s alternate endings. 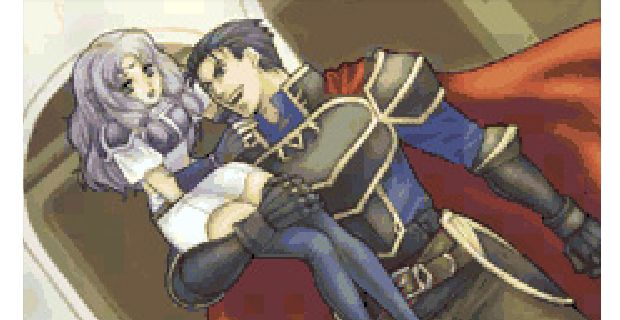 As the story progresses and the party’s journey grows more difficult, it is a wonder to watch Florina grow into a strong young woman.

Her journey (along with the journeys of all the other characters) is a treat to behold.

But this journey comes to an immediate close if Florina dies in battle.

One miscalculated move by you, the player, and Florina dies. Maybe an arrow pierces her heart. Maybe a hidden catapult takes down her precious Pegasus. 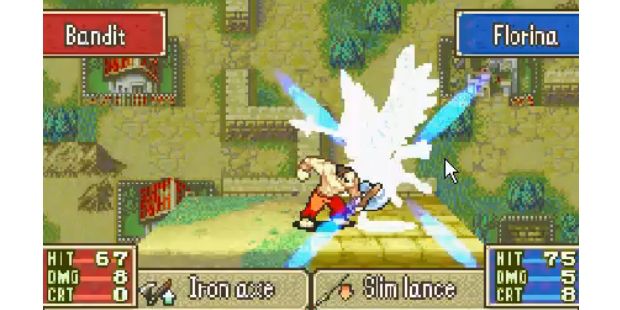 Whatever the reason, if Florina dies, she says her final words and leaves the world forever.

Her story comes to an abrupt close. 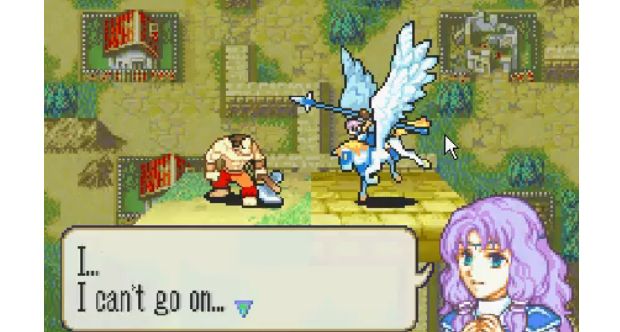 While shocking and unexpected, this very real and very tragic portrayal of death has the chance of happening with every single character you meet in Fire Emblem. If you grow connected to a lot of different characters (which is highly likely thanks to the game’s solid writing!), the moments of loss and bitter farewells happen very often.

With each death, one more character from Lyn’s party (your party) is gone forever.

You can watch what happens when a character dies in Fire Emblem right here:

There have been many games that handle character death in a very similar way — the aforementioned Final Fantasy Tactics is a good example, as well as the more recent (and absolutely stellar) Valkyria Chronicles for the PlayStation 3.

In those games — both tactical RPGs as well — when your characters die in battle, they are gone for good as well (although it is a little more complicated and flexible due to some revised rules and alternate options).

And while Final Fantasy Tactics was released before Fire Emblem for the Game Boy Advance, Fire Emblem was the first game I personally played with this devastating, yet utterly engrossing use of permanent death.

My initial reaction to it was admittedly mixed.

At first, I wasn’t a fan of this tactic, as I am a completionist at heart and would curse the screen every time one of my characters would die. Not only would I be angry that I made a dumb move and would now have to say goodbye to a character that I have been leveling up for several chapters, I started to realize that it was becoming more than that: To my surprise, I was actually starting to miss the characters and were sad and sorry to see them go.

I … actually felt a little bad about seeing them die.

And then it hit me: This gameplay mechanic was not bad. It was brilliant.

In Fire Emblem (well, the early games at least) you can only save between chapters. Because of this, if a character dies in battle, you technically can reset the game and restart the chapter, making sure to not kill your character along the way.

While this is a pretty major loophole, when you are two hours deep into a chapter, resetting the game is not really an easy (or realistic) option.

But, you know what? I would still do it. In fact, I did it multiple times.

I would be at the very end of a long, involved chapter, start to rush through my gameplay, make a dumb move and accidentally kill off one of my characters.

If it was a character I liked (which, for me, WAS ALL OF THEM!) I would stop, stare at the power button, and think to myself: “Okay, Chad, you have played this chapter for almost two hours. You are about to finish it and save. Do you really want to reset because of one, random, completely fictional character that only exists in a videogame?”

I wouldn’t even have to think about my answer for a second. I would flip off the power switch, reload the game, and try again.

Why? Why the heck would I lose hours of gameplay for something like this?

The answer was simple: I felt guilty.

I felt bad that one of these characters had to die because of a stupid move I made. Yes, of course I knew the character wasn’t real and my decision to continue on without him/her would not mean anything in the long run (with so many characters, I could have easily found a suitable replacement in battle).

But I didn’t care about being practical.

When my characters died in Fire Emblem, I wanted them back. Simple as that. It was my first honest, genuine thought and I would act on this, resetting the game and giving the chapter another try.

I didn’t say it wasn’t absolutely insane, but it is how the game made me feel (and still does!).

Because of this, Fire Emblem will always go down as one of my most cherished game memories of all time. Losing a character forever — and the unexpected feelings of remorse that elicits — is something I will never forget.