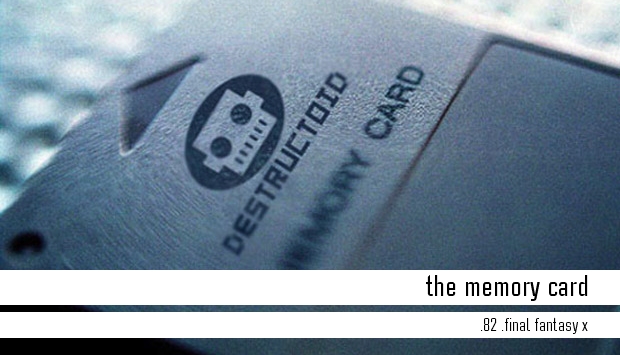 For as many people that praise the modern Final Fantasy games for their glorious, technically impressive cutscenes, there is an equal amount of people that criticize them for being far too overdramatic and emotionally empty.

As a huge fan of the “older” Final Fantasy entries (IV & VI!), I would normally be predisposed to agreeing with these latter sentiments. I would even argue that there is more emotion in the 16-bit Final Fantasy games than any of the recent iterations.

But, despite my thoughts on a lot of these magnificently beautiful, yet emotionally hollow modern Final Fantasy cutscenes, one sequence in a relatively recent entry really touched me in a way I never thought it would. While the melodrama is thick, one particular moment in the conclusion of Final Fantasy X shows off a surprisingly quiet confidence and impressive sense of direction.

It is my favorite moment in Final Fantasy X — a dramatic, tragic scene that brings the epic role-playing game to a heartbreaking close.

I actually didn’t play Final Fantasy X until a few years after it was released. I had been a fan of all the games in the series up to that point, but after the perfection that was Final Fantasy IX on the original PlayStation, I was worried PlayStation 2’s first contribution to the series was going in a direction I didn’t like.

Lucky for me, after finally playing the game, I was proven very wrong. I loved Final Fantasy X after finishing it and was surprised by how moved I was by the game’s epic, yet personal tale. 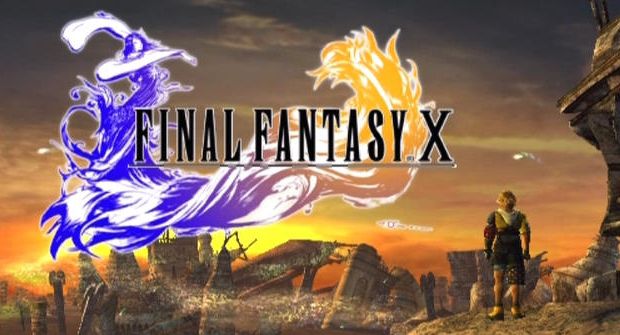 In the game, you play as Tidus, a boyish, slightly generic Final Fantasy protagonist, who also happens to be the star of a strange underwater sport called blitzball.

Final Fantasy X opens with Tidus in the middle of one of these heated and highly skilled games of blitzball, being cheered on by the futuristic city of Zanarkand. 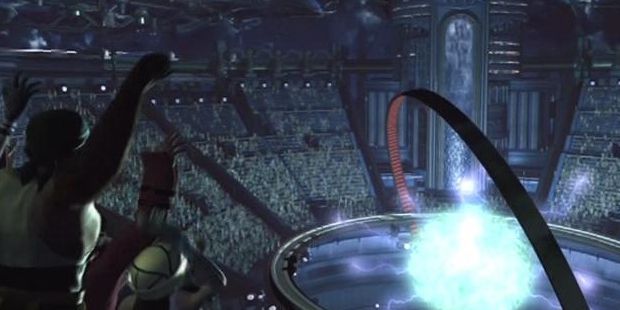 During the tournament, the city is unexpectedly attacked by a giant creature that goes by the ominous name of Sin.

Teaming up with his older, wiser (and badass!) guardian Auron, Tidus runs through the streets of Zanarkand, the two trying their best to defend against the constant onslaught of Sin’s minions.

Unfortunately, Tidus and Auron are unsuccessful in their battle and are overtaken by Sin. 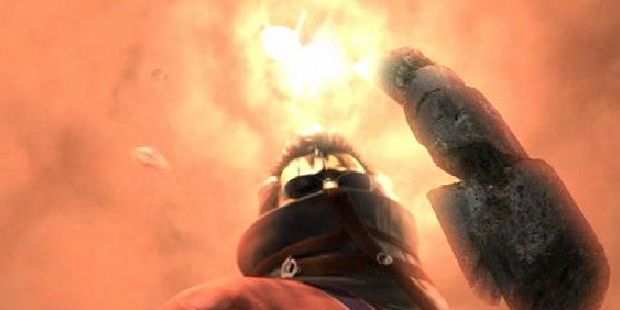 The world before Tidus fades to white. 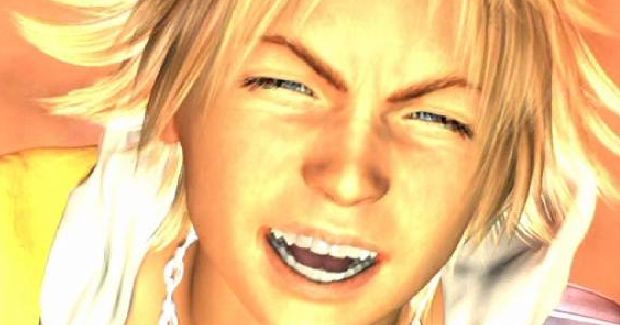 When Tidus awakes, he finds himself in an unfamiliar world — the world of Spira.

Shortly after arriving in this strange, new world, Tidus meets a girl by the name of Rikku, a member of the technology-driven tribe of the Al Bhed. Rikku informs Tidus that his home world of Zanarkand was destroyed by Sin 1000 years ago.

For good reason, Tidus is confused and shocked by this news. Was he really 1000 years in the future? If so, how did this happen? And what the heck is going on?

Before he even has a chance to comprehend anything, Sin reappears and attacks the ship Tidus and Rikku are on. After the vicious attack Tidus is thrown overboard. 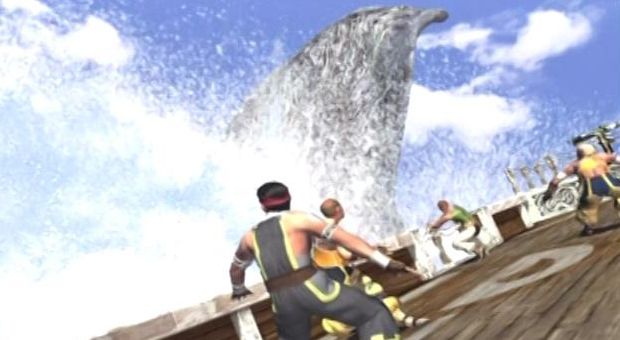 Waking up (again), Tidus now finds himself on the island of Besaid. Here he meets the eclectic character Wakka, a fellow blitzball player. It is Wakka that then introduces Tidus to Yuna, a beautiful summoner that is about to embark on an important pilgrimage to defeat Sin. 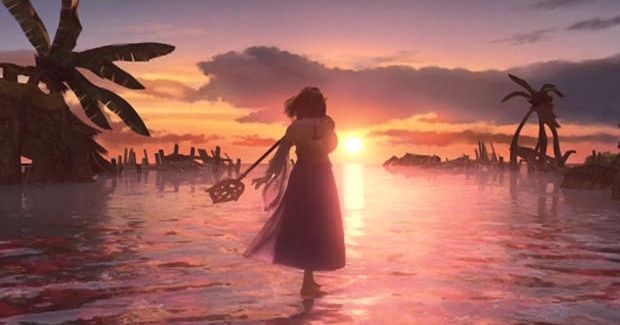 Intrigued by Yuna, Tidus agrees to join Yuna’s pilgrimage under the guise that he is just going to travel with Wakka to help him in a far-off blitzball tournament and look for a way to get back home.

Along their journey, Tidus and Yuna start to form a special bond. She finds interest in his mysterious qualities, while Tidus looks at Yuna as one of the bravest souls he has ever met, especially after finding out that, to defeat Sin, Yuna may have to sacrifice her own life. 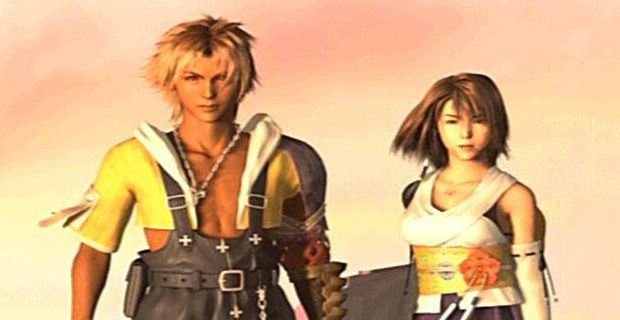 Determined to find a way to save Yuna and still destroy Sin, Tidus continues with Yuna (and many new friends) on her pilgrimage.

Many lands, many hours, and many (many!) plot twists later, the party finally reaches the sad wasteland that was once Tidus’s home. Standing before them is the ruins of Zanarkand.

It is here when this week’s Memory Card moment occurs: Yuna’s empty embrace.

Here in Zanarkand, Tidus learns the horrible truth about who he really is and what happened to his beloved city. 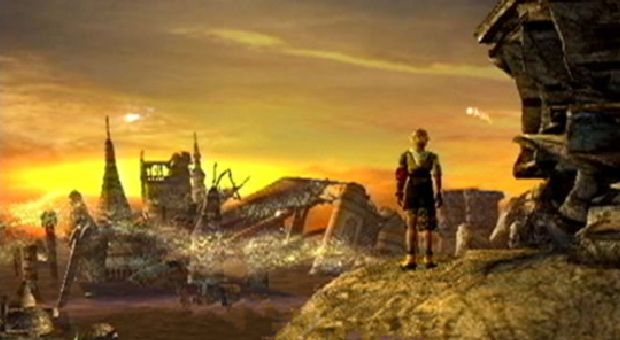 You see, the past Zanarkand, as Tidus has come to remember it, is not real. It is actually a dream world created by special summoners — called fayth — to keep the memories of this once great city alive. (Think of it as a thousand year dream the fayth are constantly experiencing.)

And Sin — whom Tidus also learns is actually his father, Jecht — is maintaining the creation of this dream Zanarkand since he came into contact with Tidus and Auron at the beginning of the game.

The fayth no longer want to hold onto this dream Zanarkand, but are forced to because of the existence of Sin.

Like most recent Final Fantasy games, it is a confusing twist, but slowly starts to make sense as the final moments of the game continue on. 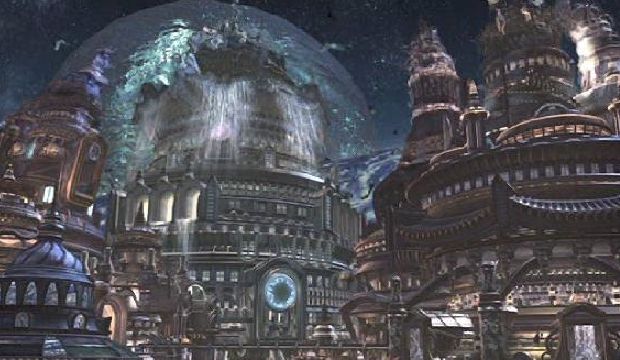 Eventually, Tidus, Yuna, and the rest of the party do battle with a series of incredibly powerful bosses aboard their airship.

The last boss they encounter is Sin himself, a massive beast with a haunting connection to Tidus. 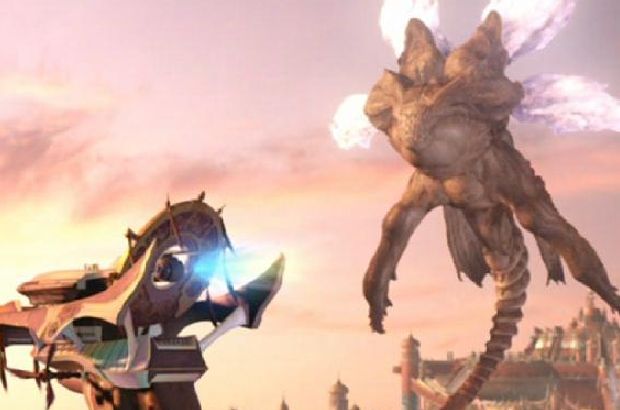 After defeating him, Tidus’s father Jecht is cured from his horrible curse. He is no longer Sin. He is free. 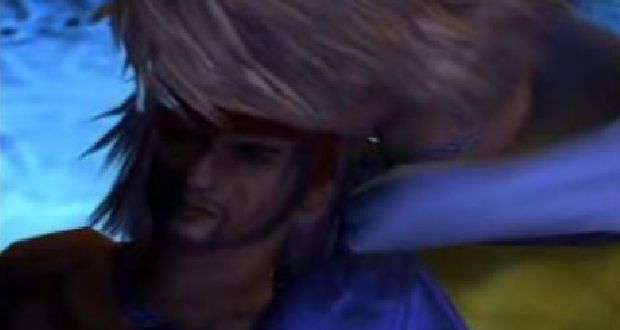 After a tough battle, the party is successful. Yuna performs her final act, banishing all evil from the world. The dream world of Zanarkand is finally released. 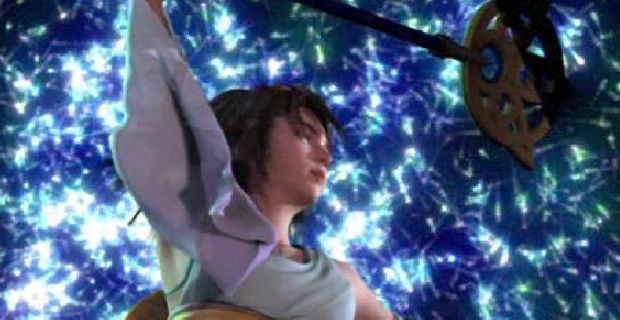 But everything is far from being a happy ending.

Being from the dream Zanarkand, Tidus’s existence in the world of Spira starts to disappear as well. 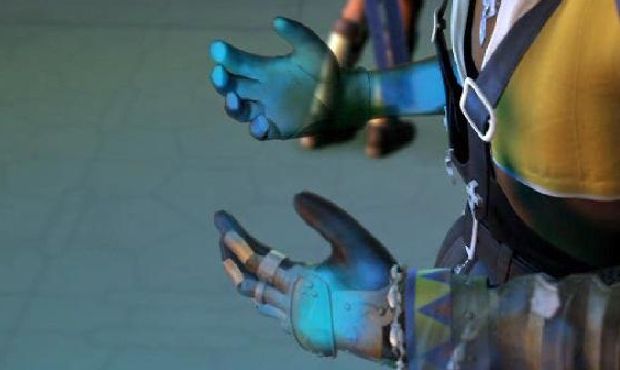 He starts to fade away before his friends’ eyes.

Yuna looks on, but can’t believe what she is seeing.

Her eyes start to tear up. 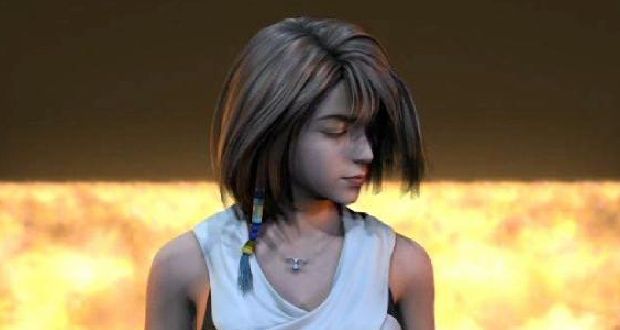 Fearing she is going to lose him forever, Yuna leaps forward to embrace Tidus. She wants to tell him she cares for him. To tell him how much he means to her. To hold him in her arms one last time before he is gone forever.

But as Yuna reaches out, she falls right through Tidus. He is disappearing so fast that she can’t even touch him. 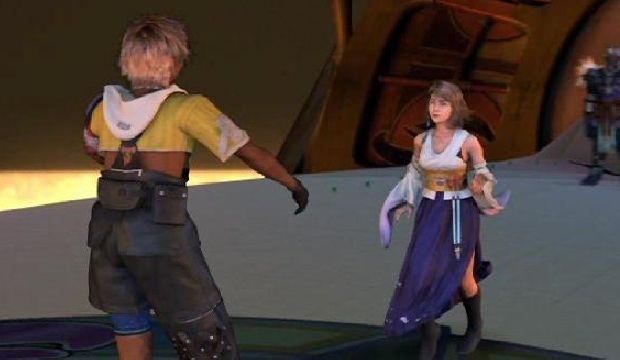 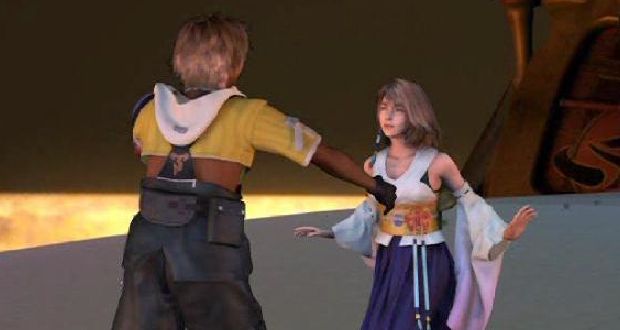 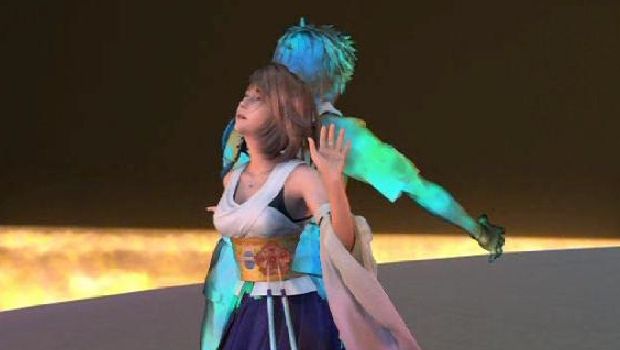 She opens her eyes, but freezes in disbelief. 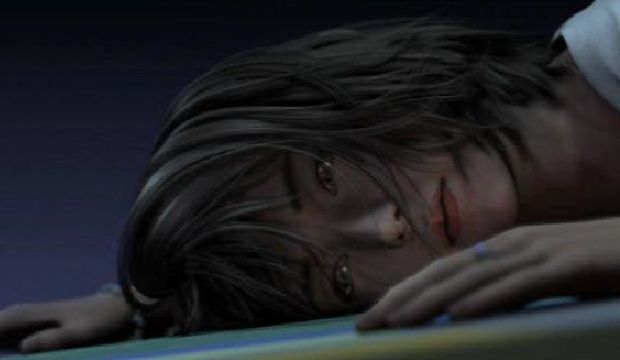 Suddenly, Yuna gathers all the strength in her body. She stands up and looks into the sunset, reflected beautifully in the moving clouds.

In one simple whisper, she says her final words to Tidus: 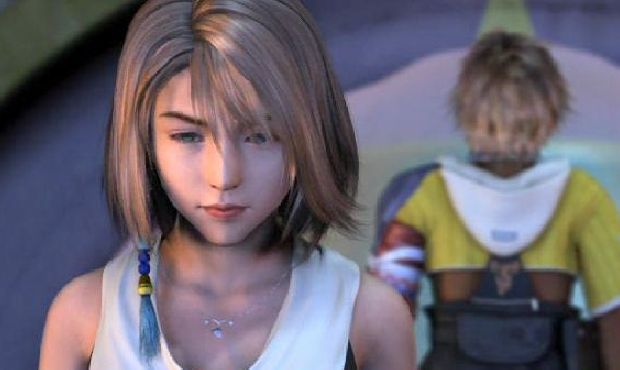 With this, Tidus appears behind Yuna. Her love for him giving them one last moment, he embraces her. He holds her close as if he never wants to let go. 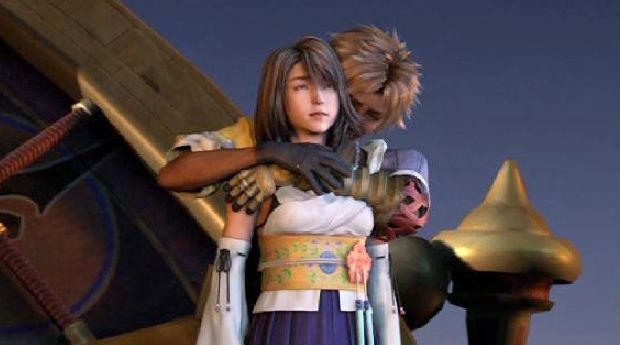 Yuna takes this moment in. She closes her eyes and tries her best to enjoy what is sure to be a moment she will never forget.

With this final embrace, Tidus fades away. He slowly leans forward and floats off into the distant clouds. 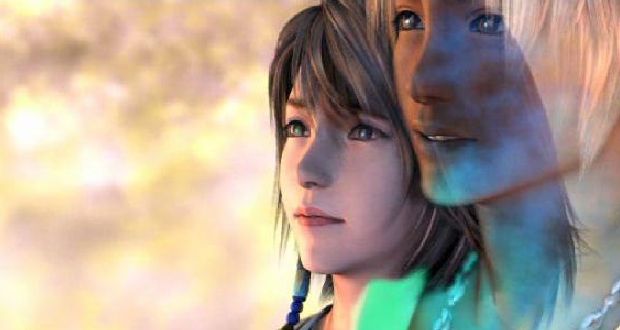 Yuna stares straight ahead, trying her best to stay strong. 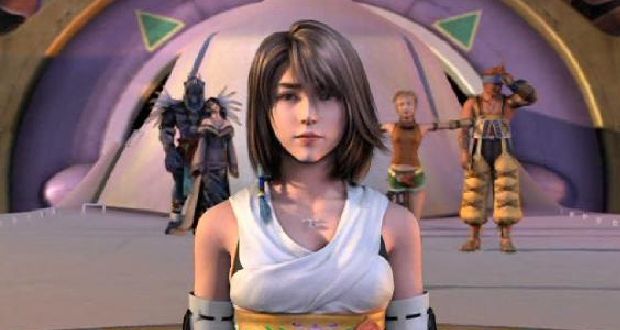 For a moment, the world stops.

As Tidus flies away, he leaves Yuna — and the world of Spira — behind.

Although devastated to see him go, Yuna uses her love for Tidus to find newfound strength. A strength she will use to make sure her world is a better place.

As Yuna tells her people in a moving speech during the game’s final moments:

“The people and friends that we have lost, and the dreams that have faded, never forget them.”

Words Yuna will always live by.

To be honest with you, I never really felt the full impact of Final Fantasy X’s ending until several playthroughs later.

I always thought it was a beautiful, wholly satisfying conclusion, but I was so oversaturated with the exquisite graphics and overload of the senses that it took me a few times to really appreciate the farewell scene between Tidus and Yuna.

Final Fantasy X is full of ridiculously over-the-top moments — including some that populate the game’s ending — but in the midst of this gorgeous chaos, the scene where Tidus disappears in front of Yuna possesses a quiet beauty that is quite remarkable.

Although there were many cutscenes in the three PlayStation Final Fantasy games (VII, VIII, and IX), the cinematics felt very disconnected from the actual game since they looked so different than the in-game graphics.

Final Fantasy X was the first Final Fantasy game I played in recent generations where the cutscenes looked almost identical to the actual game you were playing.

And this reminded me of how the old Final Fantasy games handled cutscenes. Obviously the 16-bit games were not nearly as detailed as the modern iterations, but there was a certain charm in seeing all the cutscenes happen completely in-game. Regardless of the inferior technology, seeing Celes jump off that cliff in Final Fantasy VI is still just as powerful as any of the cinematics I have seen now.

Unlike most romantic relationships in the Final Fantasy world, Tidus and Yuna have a more innocent, playful, unspoken relationship, and their final scene really reflects this.

Just look at the direction of the sequence as a great example.

As mentioned, Final Fantasy X is a very “loud” game, at times displaying cinematics that are almost too busy and chaotic.

But when Tidus and Yuna part ways, everything is slowed down.

Watch the scene again and count the number of lines of dialogue. There are very few.

The directors of the game (Motomu Toriyama, Takayoshi Nakazato & Toshiro Tsuchida) trusted the story and the characters enough to slow down the action and let Tidus and Yuna’s final interaction be all about the looks on their faces; their body language; their unspoken love for each other.

Look at the emotion on Yuna’s face right before she runs for that embrace with Tidus. The animators put such detail into this look that there is no need for any dialogue to accompany it.

It is a beautiful, quiet moment that I had not seen since the glory days of the Final Fantasy games on the Super Nintendo.

And notice the way the entire sequence has no problem taking its time. When Yuna falls to the ground after her empty embrace with Tidus, the camera stays on her face for an extended amount of time.

When you take this truly stunning direction and couple it with an absolutely magnificent musical score, you have a really classic videogame scene on your hands.

Sure, the ending gets a little overdramatic, but it is hard not to get choked up when Tidus makes that final leap into the clouds. The way the music stops for just a second; the way Yuna stands strong, while at the same time looking like she is about to erupt in tears.

It all just works.

The final sequence between Tidus and Yuna is definitely one of the highlights of the more recent Final Fantasy games. As strong as the melodrama is during their goodbye, the entire scene also has such a personal, quiet feel to it that it stands out as being one the most unique and touching videogame moments in the Final Fantasy series.