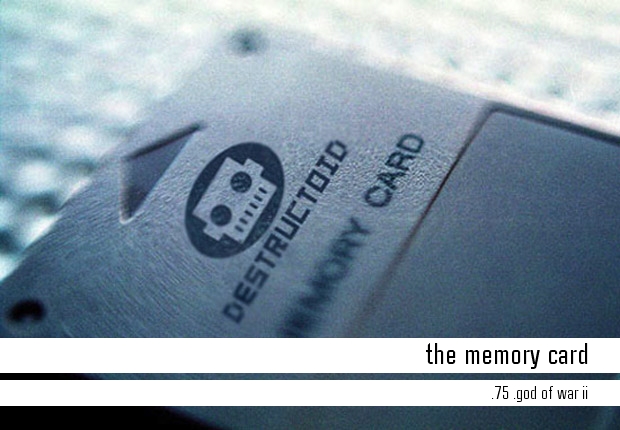 Regardless of their varying types of gameplay, videogames generally portray their most emotional story beats within the confines of a safe and easy cutscene. Not to say doing this is a bad thing by any means — some of the most incredibly beautiful videogame moments I have ever experienced have occurred in cutscenes (three words: Palom and Porom).

But it’s very rare for a videogame to integrate an emotional story moment into the actual gameplay. Sure, there are examples like BioShock or Half-Life 2 that present very moving, dramatic moments between characters in-game, but those sequences are still more or less just traditional cutscenes with a fancy, somewhat misleading, real-time sheen.

There is one moment in God of War II for the PlayStation 2, however, that manages to manipulate the player into performing a shocking act that completely changes the emotional tone of the game’s story. And it does all of this during the game’s action-heavy gameplay.

Hit the jump to witness a surprisingly brilliant moment in a game that barely gives you time to breathe.

God of War II holds a special place in my heart. Not only is it an extraordinary action/adventure game — one of the best ever made! — but it was released a few months after I first starting writing for Destructoid and was actually the first review I took part in. Not to distract you with pointless nostalgia, but every time I play the game it makes me think of this wonderful site and that makes me pretty happy. Yet another reason for me to love the game! Just wanted to throw that fun fact out there before we move on.

Okay, back to the topic at hand.

In God of War II, you play as Kratos, the newly crowned god of war, which he was “appointed” after violently overthrowing the previous title holder Ares in the original game. Just as in the first game, God of War II starts with a literal bang, with Kratos thrown into the middle of an epic battle between Greece and an army of Spartans.

Kratos chooses early on to fight alongside the Spartans, partly to be loyal to his previous comrades, and partly because it is the only way he can atone for the horrible deeds he committed early in his life.

Because of his decision to fight for Sparta, the gods grow furious with Kratos and send many of their most powerful minions to try to destroy him, including the towering Colossus of Rhodes.

Once Kratos finally defeats the Colossus, the statue’s massive hand pins him to the ground. Hurt and barely alive, Kratos limps to safety, but is interrupted by Zeus, the father of all the gods himself.

Instead of helping him, Zeus instead threatens Kratos and tells him that the only way he will save his life is if Kratos serves him and does his bidding for all eternity. Kratos — never listening to anyone’s orders, even those of a god — refuses and is left to die by Zeus.

Before he is dragged to Hell, the goddess Gaia saves Kratos and offers him a deal: for saving his life, Kratos will have to travel far to meet the Sisters of Fate and use their powers to travel back in time, change his past, and enlist the help of the massive Titans to help overtake Zeus and Mt. Olympus.

Kratos agrees and sets off on an epic journey to find the Sisters of Fate. To help him reach his destination, Gaia gives Kratos a flying Pegasus to traverse the great distance quicker. Before mounting the magnificent beast, Kratos walks among the numerous dead Spartans and discovers one remaining soldier still alive.

Helping the lone solider up, the Spartan tells Kratos that he never lost faith in him — he knew Kratos, his god, could never be killed. Kratos instructs the soldier to return to Sparta and prepare for the epic battle ahead. Hesitant and scared, but loyal to Kratos, the Spartan soldier agrees.

As the brave soldier runs off into the distance, Kratos turns away, sits atop the Pegasus, and flies off to find the Sisters of Fate.

After an unbelievably fantastical and epic journey (seriously, best game EVER!), Kratos eventually reaches the palace of the Sisters. It is here when this week’s Memory card moment occurs: The blind fighting the blind.

While exploring the elaborate palace, Kratos solves a series of tricky puzzles and is led into a large room with a huge glass window running alongside one of the walls. Because of the bright sky outside and the pitch blackness of the room, Kratos’s body appears as a silhouette when walking around against the window.

Suddenly, Kratos hears a voice coming from the other side of the room.

“I have come too far to fail!”

Immediately, the unrecognizable figure that uttered the threatening phrase rushes forward to attack Kratos. Obviously this random warrior has come to the palace as well and will do anything to reach the Sisters of Fate first.

What follows is a beautiful, one-on-one battle between Kratos and the mysterious soldier. As each warrior swings his weapon, the smooth-flowing action is shown in silhouette. Blood and particle effects fill the screen; the grunts from Kratos merge with the booming music to form a choir of ferocious violence.

With a well-timed strike from his blade, Kratos stabs the fierce soldier in the stomach. He smashes his body against the wall and continues to stab him over and over again, staining the room with red blood.

An intense rage filling his entire body, Kratos grabs the severely wounded soldier and breaks through the giant window. Both he and Kratos fall hard to the ground below.

Before he has a chance to rip out the blade that is still stuck in the soldier’s stomach, Kratos looks down and realizes something horrible: the soldier Kratos just brutally attacked is the same Spartan solider he had sent back to Sparta earlier in the game.

Kratos is stunned in disbelief.

The Spartan solider, barely alive, leans forward and tells Kratos what happened. When he returned to Sparta it had been completely destroyed by Zeus.

As he tells the story, the game shows a flashback of the events that occurred: Zeus descended upon the city, destroying buildings and murdering innocents. As the people of Sparta died, they cried out for their god, Kratos, to come and save them. Sadly, their final pleas were met with nothing, for Kratos was too busy on his quest to be able to rescue his own people from Zeus.

After seeing Sparta in ruins, the lone Spartan solider had no choice but to seek out the Sisters of Fate and try to change the past. That is why he was wandering the palace at the same time as Kratos!

With his final breath, the Spartan soldier begs Kratos to avenge his people. Kratos silently agrees as the soldier dies in his arms.

Filled with more anger than ever before, Kratos curses Zeus’s name and vows to seek his ultimate revenge. Refusing to ever do the bidding of the gods again, Kratos moves forward to find the Sisters and put an end to Zeus once and for all.

You can watch the tragically beautiful battle with the Spartan solider right here (it starts around 6:25):

Even though it seems like kind of a small moment in such an epic game, the battle with the Spartan soldier is absolutely brilliant on so many different levels. In fact, I would go so far as to say it is one of the most ingeniously constructed videogames moments in recent memory.

Let’s break down what makes the scene so special.

First off, it helps to understand the tone of God of War II up to this point in the game. God of War II is mostly about killing things in completely over-the-top, ludicrously violent ways. The game does contain clever puzzles and platforming, but most of the gameplay consists of attacking hordes of enemies and dispersing them in the most brutal ways imaginable.

So, when you run into the Spartan warrior in the palace of the Sisters of Fate you, as a player, are already used to killing everything that gets in your way. The game takes the adrenaline pumping through your body and uses it to elicit a natural reaction to any enemy on-screen. There is no reason at all to think the mysterious soldier threatening you is in any way someone you might not want to violently destroy. Up to this point, the game has offered a simple formula: Kratos + approaching enemy = KILL!

Now, keep that thought in the back of your mind as we focus on the next layer of the sequence.

Visually, the battle between Kratos and the Spartan warrior is presented completely in silhouette. Sure, this is an absolutely gorgeous, artistic decision, but it obviously serves a much more important purpose. By entering this dark room, Kratos — and, in turn, the player — cannot identify the soldier as being the same loyal, friendly Spartan from earlier in the game.

For Kratos, the soldier in the darkened room is just another random enemy standing in his way.

As the battle commences, it starts to get more and more violent. What starts as a normal hack and slash battle of blades ends with Kratos brutally stabbing the solider multiple times in the stomach, just as he has done with every single other enemy in the game.

And as a player, you almost cheer for this. The violence is so over-the-top in God of War II that it actually wants you to uncomfortably laugh at it. Ripping off limbs, pulling out eyeballs — it’s all part of the sick fun of the game and a strangely satisfying way to finish off the numerous enemies.

So with your adrenaline pumping (as mentioned earlier), you step into the scene completely ready to continue destroying whatever stands in your way. When the soldier rushes forward, you prepare for battle. As the fight heats up, you hypnotically pound on the attack button even harder. The only thing on your mind is victory! Once the circle icon pops on the screen cueing your brutal finishing move, you can’t wait to see what violence will be on display.

And when it happens it feels great — another satisfying end to a tough battle.

But once the cutscene takes over and you find out the solider you just mortally wounded is actually your ally — the same Spartan from earlier in the game — everything changes. For the first time in the game you feel guilty for looking forward to the over-the-top violence. In a way, the terrible thing Kratos just did to the solider was caused by you and your adrenaline-fueled button pressing. By hiding the soldier’s identity in such a subtle way, the game is manipulating you to perform the horrific act.

And, just like Kratos, you actually feel some genuine remorse.

Remorse. In a videogame! It’s a pretty crazy emotional experience and just shows you how, if done right, videogames can elicit some pretty surprising and shocking reactions. And, again, this feeling is not cheap and caused by accident. Every single design choice during this sequence is intentional and the reason it all works so well. Every layer means something: the tone of the game up to that point, the silhouetted visuals, the reveal of the soldier, the way Kratos’s rage fuels the final climax of the game. It is all perfectly constructed.

God of War II is primarily an action game. To weave a dramatic, emotionally moving story moment so seamlessly into the action-heavy gameplay is an absolutely amazing accomplishment. The blind battle with the Spartan warrior is one of my favorite parts of the game and easily one of the most memorable videogame moments of all time.