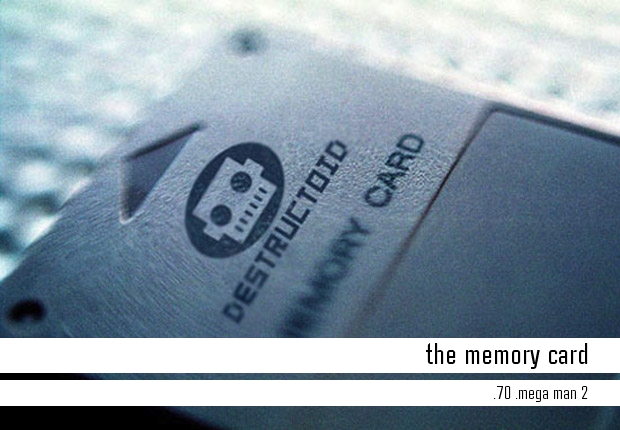 As a huge fan of retro games, I tell myself over and over again that fancy new graphics don’t really matter — it’s the gameplay that really counts. A game with great gameplay and subpar graphics can still be considered good, but a game with terrible gameplay and amazing graphics more often than not is dismissed as a failure. Regardless of what is more important, graphics are obviously an integral part of the mainly visual medium of videogames. In fact, some of my favorite videogame moments of all time revolve around a game’s graphics.

Over the next three weeks of Memory Card articles, I will be focusing on three very specific moments from three different generations of videogame consoles that feature graphics that absolutely blow me away. These moments aren’t necessarily the best graphics each generation has to offer — in fact, I don’t think that is the case at all — but they are moments that hold a very special place in my heart. Each of these moments actually made me gasp out loud in awe the first time I witnessed them and helped me realize how strong, well-designed visuals could have just as much an emotional effect on me as a rich story or innovative gameplay.

For this week, the featured moment occurs in Mega Man 2 for the Nintendo Entertainment System. If you have read the title of this article —  and are a fan of the game — you probably already know what moment I am talking about.

Hit the jump for Part 1 of the Memory Card Graphics Trilogy of Amazingness. Or as the cool kids are calling it: The Graphics Card!

The main reason Mega Man 2 is significant — and the primary reason most gamers remember it so fondly — is it is such a vast (italics!) improvement on the original game that preceded it. The sequel is better than the first game in almost every way and is considered by many to be one of the greatest videogames of its type ever made — even 21 years (!) after its release.

I feel like explaining the basics of this game is almost pointless — I can pretty much guarantee that everyone reading this right now knows all about Mega Man — but, for the sake of consistency, I will fill everyone in.

In the game, you play as the titular hero Mega Man, a robot created by scientist (and all around nice guy) Dr. Light. In the original Mega Man, Dr. Light also created six Robot Masters in addition to Mega Man to help in the construction and maintenance of the city. In an unfortunate twist, Dr. Light’s rival Dr. Wily reprogrammed the helpful Robot Masters to do his bidding and perform evil acts, including trying to destroy Mega Man. Lucky for the world, Mega Man destroyed all six robots and put an end to Dr. Wily’s devious plan.

In the game’s sequel, Dr. Wily is at it again, this time creating eight Robot Masters of various types to bring down Mega Man and cause chaos in the city! DEVIOUS!

Like in all the games, Mega Man is tasked with destroying all the Robot Masters. To do so, Mega Man must make his way through elaborate, well-designed levels, each stage ending with one Robot Master as its boss. Upon defeat, Mega Man is able to equip himself with the Robot Maser’s main weapon and use the new upgrade to help him throughout the rest of the game.

Needless to say, the gameplay in all the Mega Man games is absolutely addictive. Playing through the games’ awesome stages, listening to the now classic soundtracks, and defeating the challenging bosses is a wonderful experience that all retro gamers cherish.

But to get into something more specific, one of the greatest things about Mega Man 2 is its exquisite, revolutionary graphics — again, a huge improvement from the original.

This week’s Memory Card moment focuses on one of those graphical improvements — maybe the best one in the game: the giant robot fish!

In all the Mega Man games, players can choose which Robot Master’s stage they want to play, and in what order. This makes defeating the bosses very strategic, and also helps keep the gameplay fresh.

In Mega Man 2, one of the most memorable (and unique) stages is Bubble Man.

Taking place primarily underwater, Bubble Man’s stage is special because it adds a whole new level to the traditional Mega Man controls. Instead of a normal jump, Mega Man can jump the entire height of the screen when under the water. In fact, the jump can be precisely controlled depending on how long the player holds down the “A” button.

After traveling through most of the stage, dodging mines and killing aquatic-themed robot enemies along the way, Mega Man falls down one particular shaft into a large room.

As he walks to the right and scrolls the screen, a huge enemy makes a surprising appearance.

In front of Mega Man stands a giant, red, robotic fish. Although he is beautiful to look at (more on that in a second), the giant fish is very dangerous. As Mega Man fights him, the fish shoots out small, hard-to-shoot shrimp that our brave robot hero must dodge, all the while making sure not to jump too high and hit the instant-kill mines that lurk on the ceiling above.

Okay, fine, I am not going to lie: the giant robot fish is not that hard to defeat. All Mega Man has to do is shoot the light that hangs over its head a few times and the mini-boss will be destroyed. And the swimming shrimp aren’t that hard to dodge either. All in all, it’s a pretty easy enemy when compared to the balls hard challenges featured in other parts of the game.

But the challenge level of this battle isn’t what makes it so special. What makes this sequence so memorable is the quality of the graphics.

Although the blurry quality won’t nearly to the visuals justice, here is a video of Mega Man confronting the giant robot fish mini-boss in Bubble Man’s stage:

Regardless of how the graphics hold up (side note: anyone that says they don’t hold up can deal with my super-powered retro fist!), the first time I saw the giant robot fish in Mega Man 2 will always remain one of my fondest, most cherished gaming memories of all time.

And, funny enough, I could have had this same memory for any of the other similarly visual mini-bosses that appear in the game.

There are many other monstrous enemies like this that show up in Mega Man 2, some even more visually stunning than the giant robot fish. But when I played Mega Man 2, I chose Bubble Man’s stage as the first stage to tackle. (What can I say? I love bubbles!) Because of this choice, the giant robot fish was the first, stunning, jaw-droppingly huge enemy I ran into. And that initial encounter is what sealed it into my memory.

Up until I played Mega Man 2, I had been impressed by the graphics in many different NES games, but there was something about the graphics in Mega Man 2 that completely blew me away. Seriously, I will never in my life forget what it was like to run into some of the oversized enemies in the game. Just the size, scope, and personality of all the giant robot enemies was almost too much for me to handle. It was a pretty life changing moment for me and really helped me appreciate what could be done — both visually and creatively — in a videogame.

Let’s break down what makes this robot fish (and all the graphics in Mega Man 2) so stupendous.

First off, the color use on the robot fish is absolutely beautiful. Instead of having the giant creature appear muddy with overly detailed art design like many of the other NES games of the time (i.e. Faxanadu), the rendering of the beast is smooth, with bold, simple colors to help make it stand out. This use of color (very reminiscent of the cel-shading of today) gives the sprite a cartoon look — a look used in almost all the other Mega Man games that followed.

Secondly, the simple use of white shapes on the bright red base as reflections gives the enemy the look of having a metal texture. Imagine those reflections not being there — the sprite would look flat and less detailed. By adding the seemingly basic white shapes, the fish looks like the big, shiny robot it is supposed to look like.

And, lastly, the angled mouth gives the enemy a depth that makes it feel bigger and much more intimidating. Not only does the black “back” section of the mouth look menacing, it gives the sprite and almost 3D look, much more visually appealing than if the fish was just seen completely from the side.

Every piece of the robot fish’s character design is impressive, especially thinking about the year this game came out (1988!). Although I am a self-proclaimed retro game fanatic, I still think this gorgeous sprite art still holds up today. To me, good design never ages.

Of course the later Mega Man games got even more graphically impressive, but Mega Man 2 paved the way for all the future, impressive visuals the Nintendo Entertainment System had to offer. It is truly a groundbreaking title.

I love to play Mega Man 2 at least once every few months — first and foremost, to get my fix of how great the game is, but I also love to revisit a game that holds such a dear, special place in my heart. No matter how old I get, it is nice to know I will always remember the nostalgic, beautiful images from Mega Man 2.

I would love to hear your similar stories! What specific graphics from an NES game do have the best memories of? Were they any other parts in Mega Man 2, graphically, that blew you away? Think of the comments as a place we can all tell our fond, wonderful NES stories. A nice, warm, comforting, retro campfire, if you will. Who brought the s‘mores?!

And make sure to check back for next week’s Memory Card on my favorite graphics memory from the Super Nintendo.