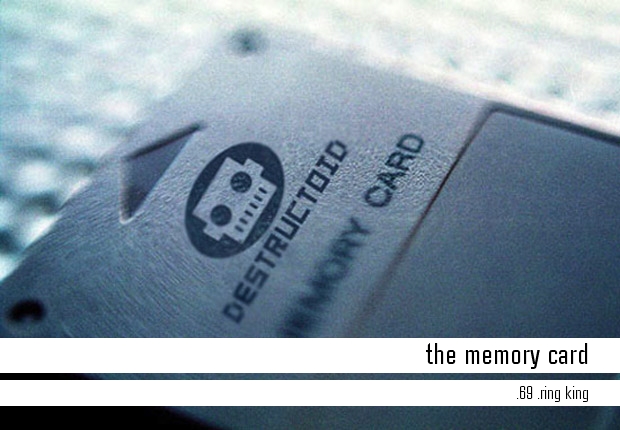 I was originally going to write about an entirely different topic this week. I had it all planned out, scheduled — ya’ know, what annoyingly organized people do. But then I realized something. Something unbelievably important.

This is edition #69 of The Memory Card.

Now, when I noticed this was the 69th article in this series, I could have done two things: I could have ignored my immature giggling and continue things as planned, or I could scrap my original idea, move it to next week, and use this rare event to post something completely juvenile — something that makes me laugh every single time I see it.

For better or worse, I decided on the latter.

Am I a little ashamed to stoop to a “69” joke and dedicate an entire feature to something so immature? Oh, most definitely. But, hey, it’s not very often I get to share this little bit of naughty videogame nostalgia with the world, so I couldn’t pass up the opportunity. Professionalism, be damned!

Hit the jump to witness a videogame moment as unintentionally hilarious as my beloved Showgirls and as embarrassingly immature as this post.

There is not much to setup here. It’s all about the visual.

In the mid ‘80s a completely mediocre boxing game called Ring King was ported from the arcade to the Nintendo Entertainment System. There is nothing special about the generic fighter at all. The gameplay is below average; the graphics are pretty terrible. Basically, everything about the game is completely subpar.

So, let’s just get to the main point of this post, then, shall we?

After fighting it out in the oddly humungous ring, this week’s Memory Card moment occurs between rounds, when your fighter heads to his respective corner to recharge.

Once your boxer takes a break between rounds, the cornerman comes out to help you get ready for the next part of the fight.

When the cornerman approaches your fighter, this happens:

But let’s give the game the benefit of the doubt. Maybe this is just a weird angle, right? Maybe it doesn’t look nearly as sexual when it’s moving.

Um, here is a .gif of the animation:

Yup, it is even more shocking in motion.

Now, what I think is supposed to be happening is the cornerman is tightening the gloves of the boxer about to fight another round. Either that, or he is doing something weird with the boxer’s shorts. Honestly, I don’t really know what this animation is supposed to depict.

But it makes me laugh every single time I see it.

I thought showing a video of the moment would be pointless (I mean, the animation is pretty much all you need to see), but then I discovered this little gem when I was searching for the game on YouTube.

You are not ready for this video. It is just as great as the moment itself: (“What the fudge?!”)

I could go on and on about how much this piece of animation makes me laugh (and how immature that makes me feel), but I really only have one question: How the heck did this not get red flagged by someone involved in the making of the game?

There must have been a room full of executives at one point that approved the final product, right? You are telling me an entire conference room full of people in suits were discussing the release of this game on the very family-friendly Nintendo Entertainment System and not one person noticed this sequence was a little bit … odd.

My only guess is this is what went down.

“Livin’ On a Prayer” by Bon Jovi is playing in the background.

Game Designer #1 just found out he got fired and just so happens to be the guy doing the final presentation to the executives about their hot new game Ring King for the NES.

At the moment he presents the unfortunate animation that occurs between rounds, all of the executives sitting around the conference table see a pretty bird chirping outside the window:

As this is happening, Game Designer #1 shows off the infamous animation. Noticing how strange it is that no one is reacting to his obvious ploy to get back at the company, Game Designer #1 finishes the presentation with a devious smile on his face. His payback is successful!

Remember the urban legend about the bitter animator on Disney’s The Little Mermaid that made all the towers in the undersea castle look like giant penises? I have a feeling something very similar happened with Ring King.

I mean, it’s the only logical explanation, right?