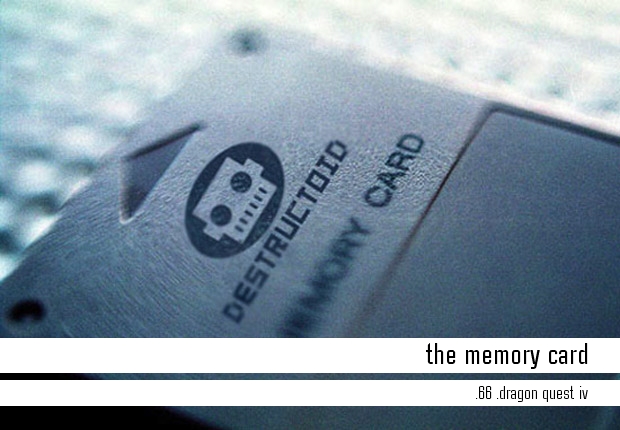 For years, role-playing games have introduced numerous, colorful casts of playable characters that ban together to stop the world from some unforeseen, horribly evil force. And, sadly, these casts are usually made up of some very interchangeable heroes. Giant sword? Check. Mysterious past? Check. Crazy haircut? Check.

As these generic heroes travel through their respective, fictional RPG worlds, they come in contact with too many NPCs to count. And sometimes these non-playable characters show signs of being even more interesting than the main protagonist you are controlling. Haven’t you ever wondered what the story is surrounding that beautiful, red-haired bartender that works in the basement of that inn? Or what of the random girl who sits by the lake, spouting helpful advice about where to find a particular treasure?

Dragon Quest IV for the Nintendo Entertainment System not only tackles these fascinating questions, the game dedicates a whole section to focus on one of the most unlikely heroes to ever set foot in an RPG.

Hit the jump to visit one of the most original, creative sequences in one of my favorite retro role-playing games of all time.

Oh, America. You are so wacky sometimes. For some reason, you decided to change the perfectly acceptable Dragon Quest name to Dragon Warrior when you brought the game to the US. And then with Dragon Quest VIII for the PlayStation 2, you decided to change it back to its original, Japanese name. What gives? I know there were some copyright fears with another role-playing game, but this kind of stuff is just confusing.

For the benefit of consistency, I am going to refer to the game as Dragon Quest IV, even though I played Dragon Warrior IV for the NES. It will just make things easier.

A lot of fans consider Dragon Quest IV a favorite of the series, and understandably so. The game incorporates a rather clever chapter system, dividing the massive adventure into parts, each section introducing new characters and filling in important plot and story details. It is brilliant concept and really makes playing through each new chapter an exciting experience.

The first four chapters of Dragon Quest IV introduce a different set of characters, each with different skills. While this is a very creative idea, some people grew frustrated with the fact that each of the new characters starts off at level 1 at the beginning of each chapter. For me, though, I enjoyed this as it made the first ten hours of the game feel endlessly fresh.

In the prologue of the first chapter, the main hero of the story is introduced as a child, but players actually don’t get to completely use him until Chapter 5, when all the game’s characters from the first four chapters are reunited to embark on a final, lengthy quest to save the world.

But I am getting ahead of myself. This week’s Memory Card focuses on Chapter 3 and one of my favorite characters in the Dragon Quest series: Taloon the merchant.

Chapter 3 of Dragon Quest IV begins in the small town of Lakanaba.

At the very start of the chapter, an overweight merchant named Torneko Taloon is woken up by his wife, Neta. She shakes Taloon and warns him to hurry to work or his boss will scold him for being late again.

Agreeing, Taloon hops up, grabs his lunch from the loving Neta, and heads west to his job at the local weapons shop.

As soon as he gets to the shop, his boss puts him to work right away.

At this point in the game, the player must work behind the counter as the actual merchant of a weapons shop and buy and sell various weapons from people who come in the store. Admittedly, it can become tedious after a while, but Taloon is offered a commission on everything he sells, so the more hours he spends behind the counter the better!

At any time, Taloon can call it quits, collect his money earned, and retire for the evening, free to come back at anytime the following day.

After repeating his job over and over again, Taloon will eventually earn enough money to start buying weapons, items, and armor of his own. Once he is fully equipped, Taloon decides to say goodbye to his job and his family (!), venture into the world, and make enough money to open his own shop in the town of Endor.

Taloon is a merchant, so his fighting skills are very minimal. In fact, in order to even survive for a few minutes, Taloon is almost required to equip as much armor on himself as possible.

As his journey to open his own shop moves forward, Taloon is tasked with completing many different quests that relate to being a merchant.

First, he is asked to find a magical safe that, once found, will protect money from being lost after death (super helpful!). Another quest finds Taloon forced to pay off a series of villagers to obtain special items and information to move forward. To do this, Taloon must fight fearsome beasts (something he is not used to), horde the items he finds after defeating them, and sell everything to make enough money to pay off his requests.

After making his way through many forests and dungeons, Taloon finally arrives at Endor, sells an expensive sacred statue he obtained on his journey, and uses his earnings to buy a vacant weapon shop. Taloon’s dream of being an arms merchant with his own store finally comes true!

Even cooler, once he sets up shop, Taloon’s wife and child join him in Endor and help him run the new weapons store.

At this point, Taloon must spend a ridiculous amount of money to hire an excavator to build an undersea tunnel to a new continent, thus expanding the world the savvy merchant has to explore and discover new treasures.

To make the funds necessary for this expansion, Taloon must journey into the wilds, fight enemies for valuable items, and sell those items at his very own store. Luckily, though, Taloon’s wife decides to take over the job behind the counter, and marks up every item to ridiculous prices, making sure a huge profit is made off each sword and piece of armor sold.

Once enough money is collected, Taloon pays off the excavator, and watches as the undersea tunnel is built.

Saying a tearful goodbye to his wife once more, Taloon makes his way to the new continent as the chapter comes to a close.

If I had a nickel for every gamer I have met that has hated Chapter 3 of Dragon Quest IV, I would have enough money to excavate an undersea tunnel of my own! For some odd reason, the chapter starring lovable family man Taloon is met with such harsh criticism.

But I guess I kind of understand where people are coming from. The entire chapter — all multiple hours of it — is mostly reserved to finding, managing, and selling items, something most people despise doing in an RPG.

But, for me, I absolutely adore how different the storyline with Taloon is.

In a good RPG with a fantastically realized world, each of these NPC characters should give the impression that they have a life they are living outside of your main character’s adventure. Each king may have a backstory of how he came into power; each villager may have a family they go home to every night after pacing around town; each merchant may have to obtain and manage every single item they sell in their shop.

This is why I absolutely love Chapter 3 of Dragon Quest IV: For the first time in an RPG, I got to see what it was like to live the life of a character that wasn’t a powerful, world-trotting hero. I got to experience what the merchant in a store experiences when the generic hero is not around. I got to find the actual items that I would sell. I got to watch as a parade of would-be heroes bought my hard-earned weapons to use for God knows what.

Torneko Taloon is anything but the traditional hero. He is a shockingly weak, clumsy merchant that has no aspirations aside from owning his own shop and taking care of his family. What a breath of fresh air!

For years, I have been hoping and praying that any videogame in any genre would be more creative with the main character you are asked to play. The limits are truly endless, but it seems designers are too afraid to take any big risks. Choose any popular game and you can find a handful of characters I would have loved to play as! Take Grand Theft Auto IV, for instance: How interesting would it be to play as a teacher at a school in Liberty City rather than the obvious gangster that comes into the town. Or in Earthbound, I would have loved to see what a game designed around a member of the Runaway Five would play like.

Sure, some of these experiments may not end up as entertaining as their current iterations — who would want to participate in constant teaching minigames when you can leap off a helicopter with a Uzi in one hand and a grenade in another — but if handed to a talented designer, any main character can become an interesting protagonist.

After all these years (even more so after the DS remake), I have been endlessly fascinated by Taloon’s chapter in Dragon Quest IV. I will be the first to admit that it is hard to push through hours upon hours of nothing but working behind the counter of a weapons shop, but the amount of respect and admiration I have for the designers to try something completely unique always makes up for the (tolerable) tedium.

Add in the fact that the completely likable Taloon has a fully realized family that plays a big part in the gameplay of the chapter and I am completely sold.

The Dragon Quest games always seem to push the envelope just as much as they stick to tried and true RPG traditions. It’s a wonderful, interesting mix and one of the main reasons the series is one of my favorites of all time.

Now, every time I walk into a store during any RPG, I always want to know more about the seemingly random merchant behind the counter.

Does he have a family?

Is he living his dream?