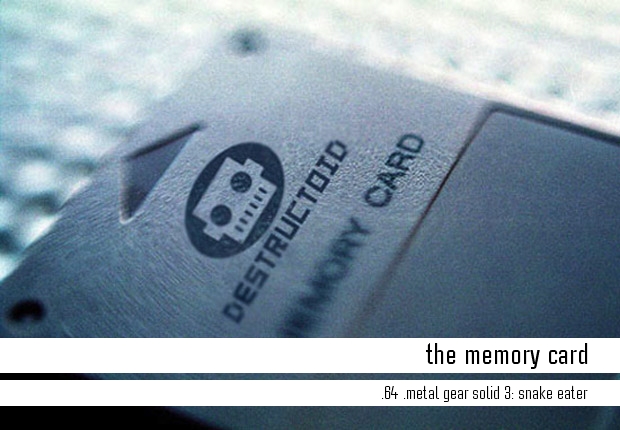 What happens to videogame characters after they die? As a gamer, you never really think about that. In most games, when the hero kills an enemy, that enemy just randomly disappears after a progressively sped up series of blinks — never to be seen or heard of again.

This dispensable, throwaway attitude towards death in videogames is not very fair. Despite the assumed noble intentions, a game’s protagonist is still killing hundreds and hundreds of people with almost no remorse. Where are the repercussions — physically and emotionally — one would receive from being the center of such a massive killing spree?!

Surprisingly, Metal Gear Solid 3: Snake Eater for the PlayStation 2 has an answer to this moral quandary. In one particular sequence, the game attempts to explain what happens when videogame characters pass into this “beyond the blink” afterlife. The result is both shocking and, frankly, pretty revolutionary.

Hit the jump to visit one of the most haunting, beautiful, and unique videogame moments I have ever experienced in my entire life.

I have featured Metal Gear Solid 3: Snake Eater a couple of times on the Memory Card before. Why? Well, the game is absolutely brilliant and is one of only a small handful of videogames that is full of almost too many incredibly memorable moments to count!

You can check out a more detailed backstory of what the entire game is about by clicking here or here. For this edition, I am just going to focus on the specific moments leading up to this week’s spectacular sequence.

One of the highlights of Metal Gear Solid 3 is its inclusion of high-quality, super intense, and well-designed boss battles. In fact, the two other Memory Card moments have focused on two of these outstanding and clever confrontations.

In this prequel, Naked Snake is tasked with facing a series of bosses, all part of a special-forces group called the Cobra Unit, led by Snake’s former mentor, the Boss. Each of the members of Cobra Unit possess a certain specialty, and sport names composed of the words “The” followed by another word (i.e. The Boss).

At the very start of the game, one of these dreaded members of Cobra Unit is already dead. The only way Naked Snake finds out about him is through dialogue and story sequences with various characters in the game.

The deceased enemy is named The Sorrow.

While progressing through the game, Naked Snake learns that The Sorrow was once romantically linked to The Boss and actually fathered her child, the infamous main antagonist of the Metal Gear Solid series, Ocelot. Whew! As much as I love Hideo Kojima storylines, sometimes they can be exhausting!

Because he is dead, the Sorrow goes unseen throughout the entire game, only popping up as a ghost in the background of certain cutscenes, when watching them through Snake’s first-person perspective.

Later in the game, after defeating many members of the Cobra Unit, Naked Snake is eventually chased to the top of a huge waterfall by Ocelot and his goons.

Having nowhere else to run, Snake has no choice but to dive off the massive falls, his body plummeting into the cold water far below.

The impact of the water hits Snake like a concrete wall.

His body is thrust underwater in various directions by the strong current.

Even though he tries to fight, Snake quickly grows weak, his vision slowly fading.

With one final push for the surface, Snake loses all consciousness and sinks into the dark waters of the raging river.

It is at this moment when this week’s Memory Card moment occurs: Death and The Sorrow.

After going white, the screen fades back in to the scene of a quiet, shallow river surrounded by a thick forest of burning trees.

Snake awakes in the middle of this strange setting and immediately slogs forward to figure out what is going on.

As he moves through the strange river, a shower of rain begins to pour down, extinguishing the fires and changing the colors around him from orange to gray.

Snake knows he is somewhere unfamiliar to normal eyes.

Suddenly, an invisible figure falls into the river in front of him. Out of nowhere, a floating man emerges from the rippling river.

It is The Sorrow.

After introducing himself, The Sorrow lowers his hood and reveals his face to Naked Snake. In a nice touch, The Sorrow bares a striking resemblance to Ocelot in the recent Metal Gear Solid 4, proving that he is, indeed, his father. The Sorrow tells Snake that he has entered the world of the dead and must face all the people whose “lives he has ended.”

As one of his eyes bleeds a red tear, The Sorrow vanished into thin air, leaving Snake alone in the dark, cold river.

At this point the long cutscene ends, the player regains control, and the boss battle with The Sorrow begins!

But this is no ordinary boss battle! In fact, Naked Snake never has to “attack” The Sorrow at all!

Once the gameplay begins, Snake is forced to journey up the river and reach the location of where The Sorrow is headed. Unfortunately, the ghost of every single enemy that Snake has defeated in the game appears and tries to drain his life.

That’s right; the amount of ghosts that attack Naked Snake in the river is directly proportional to how many enemies he killed in the game. If you, the player, manage to sneak your way through the entire game and not kill anyone, only the previous bosses will appear in the river and stalk Snake (as the bosses have to be killed to progress the story). If you decide to brutally destroy a multitude of enemies, The Sorrow river section contains an unrelenting barrage of attacking ghosts.

While the ghosts of Snake’s rivals move towards him, The Sorrow ominously floats ahead just out of reach, shooting projectiles at Snake that he must dodge.

Once Naked Snake passes through all the deceased enemies, he finally reaches The Sorrow.

Instead of having to fight him, however (the Sorrow displays an empty life bar the entire “battle” — he is dead, after all), all Snake has to do is touch him to end the sequence. Unfortunately, touching The Sorrow kills Snake instantly.

But all is not lost! After “dying,” instead of selecting the “continue” option, the player can actually access Snake’s inventory from the Game Over screen, select a Revival Pill, and bring Snake back to life!

Once revived, Snake continues his journey to stop the remaining members of Cobra Unit and put an end to The Boss’s evil plan.

You can watch the brilliant, haunting encounter with The Sorrow right here:

Love him or hate him, you have to admit Hideo Kojima is an absolute mad genius. The details of the game design in the Metal Gear Solid series are stunning and truly boggle my mind.

First off, there is the backstory of The Sorrow and how he relates to all the other characters in the game. Instead of filling his games with generic, interchangeable enemies, Hideo Kojima makes a point to include living, breathing, fully interacting characters that make all his game worlds feel entirely organic.

When The Sorrow is mentioned throughout the game, you really get a sense of the history of the Cobra Unit and how it relates to The Boss … and to Snake.

As mentioned earlier, The Sorrow makes strange, creepy appearances throughout the game’s entirety, usually in ghost form and only when viewing a cutscene from Snake’s perspective. Snake’s perspective. This is a very important detail. Not only does this mean the Sorrow appearances are completely optional and do not need to be viewed in order to beat the game, experiencing them from Snake’s point-of-view proves that Kojima wants the player to feel the personal connection between Naked Snake and The Sorrow. Snake is near-death the entire game and The Sorrow — essentially a form of death itself — is always watching over him, just one step away.

It’s all remarkably powerful and completely comes together once Snake actually confronts the entity that has been haunting him the entire game.

For starters, the way Snake meets The Sorrow makes perfect sense. It isn’t until Snake jumps off a giant cliff and almost kills himself when The Sorrow is allowed to bring Snake into his sick, twisted world. And, correct me if I am wrong, but I have even heard The Sorrow makes chill-inducing appearances during some the Metal Gear Solid 3’s Game Over screens. If this is true, the game’s level of genius will increase even more in my eyes.

And then there is the setting for The Sorrow: a long, foggy, gray river. Keep in mind this is a conscious, creative choice and serves as the perfect location for the encounter with The Sorrow. Who knows? If Snake didn’t flirt with death in an actual river, maybe this sequence would have been set somewhere else? Maybe The Sorrow appears in the location you are about to die in. Again, it’s the thought-provoking details of the design that raise the Metal Gear Solid games to a higher plane.

All of this brings us to the most obviously memorable component of The Sorrow sequence: the ghosts and their existence in the game’s surreal afterlife. How many of you knew that the enemies you killed in the game related to the amount that attacked you? The first few times I played I had no idea. I always kill a fair amount of enemies in Metal Gear Solid 3, so I never noticed a difference in the amount of ghosts in the river.

It wasn’t until I replayed the game and completely avoided killing people when it hit me. And, needless to say, I was impressed. Metal Gear Solid 3 actually gives its destroyed enemies a place to exist after death. Never before (and not since) have I ever seen this utilized in a videogame.

Even more impressive is the fact that the game even remembers how you killed each and every enemy. Say you killed a solider by slashing his throat. The enemy’s ghost will have a slit throat with blood spewing out! Shot the enemy? Their ghost will have a bullet hole in whatever part of the body you shot them! The word brilliant is almost not powerful enough a word to describe it all.

As a gamer who is constantly looking for videogames to innovate and try new things, the Metal Gear Solid games are a dream come true for me. Not only do they have the mainstream appeal of solid action and stealth gameplay, they possess some of the most intelligent, creative, and truly ground-breaking examples of game design I have ever seen!

The encounter with The Sorrow is no exception.