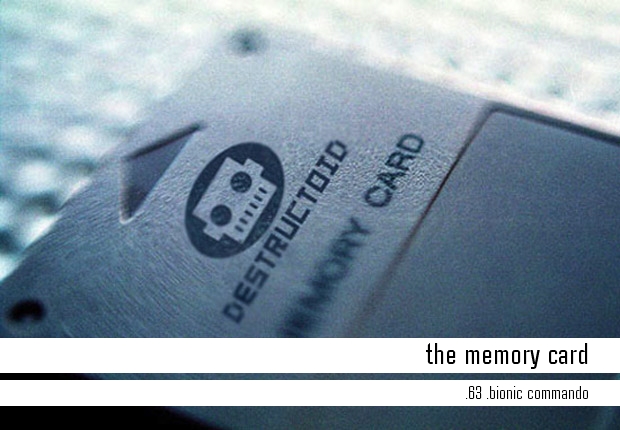 I have witnessed a multitude of videogame moments over the years that I could easily describe in one word. Sad. Amazing. Impressive. Heartbreaking. Beautiful. It seems there is always one key thought that comes to mind when witnessing something extra powerful — something that you know you will remember for years to come.

One such moment occurs at the tail end of Bionic Commando for the Nintendo Entertainment System. And if you are a retro fan in the slightest you probably already know what moment I am talking about. But think about it for second: How would you describe this sequence? It’s a little bit of everything: it’s violent; it’s hilarious; it’s offensive; it’s ludicrous. It’s basically really hard to describe!

For those of you who don’t know what moment I am talking about, hit the jump to witness something mere words can never do justice.

The original Bionic Commando has become a retro classic over the years. (And, for the record, I hate using the term original Bionic Commando — for me, there will only be one.) The gameplay mechanics may take some getting used to (no jump button?!), but the extraordinary level design and overall uniqueness easily make it one of the best videogames of the NES era.

In the game, you play as Nathan “Radd” Spencer, the bionic commando himself, a soldier equipped with a gun in one hand and a badass mechanical grappling hook (or, bionic arm, if you will) on the other.

The story of Bionic Commando — what little there is — is the source of much controversy, and, honestly, is one of the main reasons this week’s Memory Card even exists. You see, in the Japanese version of the game, Radd fights against the actual Nazis (yup, the same ones from WWII), with Adolf Hitler being the game’s main antagonist.

You read that right: Hitler is the bad guy.

When Bionic Commando was eventually released in America, any and all references to Nazism were completely take out, leaving the enemy army to be named the “Badds,” the Hitler antagonist to be changed to “Master-D,” and every single swastika to be turned into the symbol of an albatross. While I respect the decision to avoid such heavy subject matter, I still don’t really understand why the changes were ultimately made — especially given the fact that Master-D’s appearance wasn’t even altered. It’s pretty obvious who this is supposed to be:

As Radd, you are tasked with rescuing your ally Super Joe and bringing down the villainous Badds once and for all.

To do this — as most of you know — Radd must fight and maneuver his way through a multitude of levels, utilizing the awesome power of his bionic arm to swing from platform to platform. It’s an outstanding, wholly original mechanic and makes for an especially challenging game.

After making his way across a variety of stages, Radd finally rescues Super Joe and gets ready for his final confrontation with the dreaded Master-D himself.

It is at the end of this battle when this week’s Memory Card moment occurs: Auf Wiedersehen!

Right before the technical final battle, Radd engages in a confrontation with a monstrous flying fortress. The fight involves scaling the massive machine to destroy it, all the while dodging flaming jets and a barrage of speeding bullets. It’s a pretty tough battle, to say the least.

Once the flying tank is defeated, Radd makes his way through a narrow passageway and is handed a bazooka by a friendly (and helpful!) solider. Radd is instructed to aim this bazooka at the cockpit of a helicopter which the newly revitalized Master-D is piloting!

Shooting his grappling hook on the edge of the passageway, Radd takes a leap (or is that a swing?) of faith and launches himself towards the hovering copter.

As he falls, he shoots off one shot from the bazooka, and watches as the rocket perfectly collides with the window of the cockpit.

A massive explosion engulfs the front of the helicopter.

The next series of events is quick, but has memorialized itself as one of the most memorable videogame moments of all time.

As the explosion continues, Radd bursts out a dramatic, borderline grammatically incorrect exclamation:

“Your numbers up! Monster!”

And then it happens:

With a shriek, a close up of Master-D’s head is shown.

And then that head explodes in a dance of pixellated blood and brains.

It is as ridiculous as it is glorious.

With Master-D (obviously) defeated, Radd is forced to make a quick escape. The demise of Master-D triggers a self-destruct mechanism and the facility programs itself to “explod” in 60 seconds!

Using the quick, stylish moves of his grappling hook, Radd manages to dodge an incoming attack from an earlier enemy and escape in the nick of time! Whew!

Just as the enemy fortress blows up in one of the greatest videogame explosions of all time, Radd and Super Joe grab onto to a hanging ladder and are whisked away into the night sky by an awaiting helicopter.

The two are safe at last.

You can check out the Bionic Commando final sequence — and all its 8-bit gore — right here:

The thing I absolutely love about Master-D’s head exploding is how infamous it has become over the years. For a retro fan, the shocking moment is just as memorable as the moment you-know-who dies in Final Fantasy VII or even when Samus takes off her helmet at the end of the original Metroid.

I think what makes it so unforgettable is its over-the-top absurdity.

I mean, there is not much to break down, but let’s really talk about what happens in this scene.

On the surface, Bionic Commando has a pretty traditional NES-era presentation. Sure, the game is rooted in a story about war, but nothing presents itself as being too offensive. Even the violent act of shooting enemies is portrayed as not much more than a body falling backwards, blinking, and quietly disappearing.

So when Radd reaches Master-D, the player is not expecting much more than a cool boss battle, a non-graphic death, and a hopefully pleasant conclusion.

Instead, when Master-D is defeated, his head explodes in the most graphic way possible.

Look at this one, specific shot, halfway through the head explosion animation:

Okay, it really doesn’t get more out of control than that. You can even see the guy’s teeth breaking apart! And look at the eyeball being blasted out of socket! What the heck?! This is all part of a Nintendo game!

The real question is: Why did Capcom include such a ridiculous piece of violence to cap off a semi-tame game? Well, I think it all comes back to my original comment about the Japanese version vs. the American localization.

When the main villain in the game is actually Hitler, the horrible, graphic exploding head means so much more. Who out there wouldn’t want to see an image of the ultimate evil Hitler being, literally, ripped apart right in front of you?! It’s one of the most satisfying, sadistic things ever and a perfect, almost patriotic way to end a videogame. After seeing it you almost want to shout “Take that, Hitler! COUNTRIES THAT HATE THE NAZIS RULE!”

But when the final antagonist is not Hitler (in this case, Master-D) … well … the moment becomes just a tad ridiculous. Not that I am complaining, though! Obviously I love this moment or I wouldn’t be writing this feature in the first place.

Besides, Master-D’s head exploding must have meant enough to Capcom since they not only kept it in the Xbox Live Arcade remake Bionic Commando: Rearmed, they made a point to improve upon its ridiculousness.

Check out this glorious piece of over-the-top videogame gore (you thought the original was bad?):

Actually, “wow” may be the perfect way to wrap up this week’s Memory Card. This moment has not been forgotten over the years for a reason. It seems “wow” is the best way to describe the nostalgic, baffling, and just plain awesome exploding head in Bionic Commando.