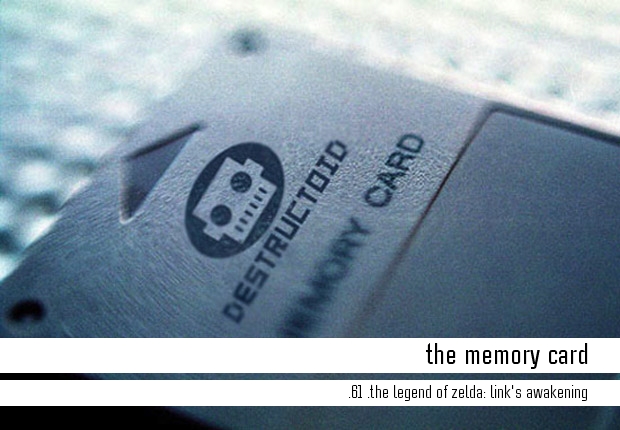 Wow. I can’t believe this is the start of the fourth (!) season of The Memory Card. Before I get started — and not to derail the focus too much — I just wanted to thank you all for your continued support of this feature over the years. So, yeah … thanks.

To kick off this season premiere, I decided to not focus on some huge, game-changing moment that blows the minds of everyone who encounters it. Instead, I am choosing to focus on a simple, clean, beautiful little piece of storytelling that occurs at the end of a game I just played through again recently.

That game is The Legend of Zelda: Link’s Awakening for the original Game Boy.

Why this moment in particular? Well, you will have to hit the jump to find out the details, but, to me, Link’s Awakening ends on a magical note, combining lovely visuals with a perfect, satisfying conclusion.

But, most importantly, it brings a smile to my face every time I experience it.

Instead of releasing another console Zelda game, Nintendo decided to take a huge risk and release the first handheld iteration of the beloved videogame series directly after the universally adored A Link to the Past for the Super Nintendo. Luckily, the risk paid off, as The Legend of Zelda: Link’s Awakening for the Game Boy is not only an outstanding videogame, it ranks a strong fan favorite amongst all the games in the Zelda series.

In the game, you (of course) play as the hero Link. Instead of taking place in the familiar land of Hyrule, however, Link’s Awakening follows Link as he journeys across the strange and mysterious island of Koholint.

But how does he get to Koholint, you may ask? Well, Link’s Awakening answers this question right away in the game’s opening cutscene.

As the game starts, Link is shown sailing his small boat in a huge storm. Before he has a chance to secure the mast, it is struck by a massive bolt of lightning. The giant burst of energy rips the ship apart and throws an unconscious Link into the cold, dark water.

Knocked out and near dead, Link eventually wakes up in the quaint cottage of a young, beautiful girl named Marin and her father Tarin.

Before he has a chance to speak, Marin lets Link know that his almost lifeless body washed up on the shore. Marin was the one who rescued Link, brought him to her home, and saved his life!

When he asks about his hometown of Hyrule, Marin shakes her head and informs Link that he is now on the island of Koholint. In fact, Marin has never even heard of a place called “Hyrule” — although she also lets Link know of her fascination with unknown lands beyond the vast sea.

After pulling himself together, Link bids a fond farewell to his new friends and sets off to discover a way to get back to his hometown.

Early in his adventure, Link stumbles upon a mysterious owl. The owl tells Link that, in order to return home, he must awaken the guardian of Koholint — the mystical Wind Fish — by collecting and playing the eight instruments of the Sirens.

No stranger to tough (and strange) tasks, Link accepts the challenge and sets off on his quest to retrieve all eight instruments from the fearsome and dangerous Nightmare creatures of Koholint Island.

After an epic journey through eight cleverly designed dungeons, Link obtains the last of the instruments and makes his way to the peak of the Tal Tal Mountains to wake the Wind Fish from his slumber inside a giant egg.

Once Link plays the last note of a haunting (and, my God, beautiful) ballad, the egg containing the Wind Fish cracks open and Link is forced to battle an epic final boss that takes many different forms (even one of his old nemesis Ganon!).

The battle with the ultimate shadow beast is tough, but Link eventually emerges victorious. It is at this point when this week’s Memory Card moment occurs: the dream of the Wind Fish.

As the shadow beast falls — warning Link about the impending doom that will befall Koholint if he proceeds farther — a set of stairs literally appears out of nowhere. Suddenly, a mysterious voice beckons Link to climb the ascending pathway.

At the top of the stairs, Link finds a platform floating in the middle of a starry sky.

To his surprise, Link learns that the voice beckoning him up the stairs belongs to the owl, the same creature that Link met at the very start of his adventure.

The owl flies forward, spreading its wings wide over the endless sea of stars. He congratulates Link on defeating the final Nightmare and bringing peace to Koholint Island. With one final farewell (and a friendly “hoot”), the owl disappears.

In his place, a massive creature begins to form. At last, the great and powerful Wind Fish appears!

Taken aback by its majesty, Link can only stare as the Wind Fish reveals to Link a shocking secret: the entire world of Koholint is just a dream. Once the Wind Fish awakes, everything will be gone (just as the shadow boss had said).

Despite this sad, catastrophic prediction, the Wind Fish urges Link to play the instruments and wake him from his slumber.

Link agrees, holds the instruments in the air, and listens as the Ballad of the Wind Fish is played one final time.

The world around Link shakes.

Suddenly, in a white flash, everything slowly disappears.

All of the people and creatures Link met on his journey fade away into the light — including Marin. Even the entire island itself disappears into the bright blue sky.

Link’s body is thrust into the air by a giant geyser.

When he wakes up, Link is back in the middle of the sea, his frail and confused body holding tight onto the side of some debris. The debris from … a boat? Yes, Link’s boat! The same boat that was struck by lightning at the very beginning of the game!

At this point Link and the player have the same thought: Was everything a dream? Was the Wind Fish correct? Was this all a strange illusion created from a giant slumbering fish?

As Link sits on the debris, a shadow forms on his face. Looking up, Link sees an enormous fish-like creature flying through the sky, blocking the sun. The Wind Fish lives!

Koholint will always be more than just a fuzzy memory.

With this, Link smiles.

You can watch the entire, memorable ending sequence right here (and in luxurious Game Boy Color!):

The ending of The Legend of Zelda: Link’s Awakening is not really that much of a surprise — it had been hinted throughout the game that Koholint was just a dream world and may not have existed in normal reality. Besides, the whole “the hero just dreamed the entire game” had been used before, most (in)famously in Super Mario Bros. 2 for the NES.

But despite the lack of shock value, the ending of Link’s Awakening works on so many different levels — some quite staggering.

First off, the “twist” is not used as a lame excuse to explain why the game looks so different than others in the series (see: Super Mario Bros. 2). It is a genuine part of the story and serves as an ethereal conclusion to a very dreamy and fantastical adventure. Basically, the ending just feels right.

Secondly, and most importantly, the presentation is quite beautiful and really helps add to the overall storytelling technique.

For starters, put yourself back in the mindset of the Game Boy era. Before Link’s Awakening, handheld games weren’t known for their dramatic storylines and even more dramatic presentations. Most games on the Game Boy were quick “pick up and play” titles that were heavy on great, addictive gameplay, but light on fascinating characters and plot developments.

This all changed with Link’s Awakening. (Quick note: To make it clear, of course there were Game Boy games before this that attempted more complex presentations — some rather successfully. Link’s Awakening is just the first handheld game that really affected me on this new level.)

More specifically, let’s break down how the final sequence plays out.

In realtime, in-game graphics, Link ascends the staircase and talks to his owl companion for the last time. Then, suddenly, the gorgeously rendered Wind Fish appears above him and informs Link of what he is and the connection he has to the island.

At this point the presentation starts to shift slightly.

Once Link plays the eight instruments for the final time, the realtime cutscene switches to a presentation similar to the opening of the game — something akin to the original Ninja Gaiden. A long shot of the island disappearing is shown.

After Link is tossed into the air by the giant water geyser, the chaos of the scene dramatically slows down, leading to a nice, peaceful view of the sky above the sea. The timing is impeccable and the direction is near flawless. Keep in mind a choice was made to cut to this shot. It’s a brilliant creative decision, as it leaves the player confused as to what really happened to Link and Koholint Island. Instead of immediately just showing Link in the water, this generic shot of the sky serves as the perfect visual bridge between the dream of Koholint and the reality of Link’s world.

When this slightly extended shot ends, Link is finally shown floating all alone in the middle of the ocean, his body clutching the scattered remains of his boat — the same one destroyed at the start of the game by the storm.

At this point the player begins to wonder: Wow. Was it all really a dream? Did Link just imagine the entire game when he was knocked unconscious?

And then the perfect final story beat comes in: the Wind Fish flying through the sky above. Again, the visual cues to present it are absolutely brilliant.

There are two specific details during this revelation that may be the main reasons I love this ending so much.

First, I adore the way you can see the shadow on Link’s face before the Wind Fish flying in front of the sun in shown. Not only is it visually pleasing, it is a nice way to motivate the camera angle to point towards the sky, following Link’s glance as he looks up to see what caused the shadow.

I also really love the way Link forms a smile on his face as the shadow leaves him and the Wind Fish disappears into the distance. To me, that one shot is the perfect way to end the game. It is a silent, entirely visual piece of storytelling that completely summarizes the entire game: the hero smiling towards a mysterious force. Even though Link saw many challenges and hardships on Koholint Island, its most lasting image — that of the great Wind Fish — will always put a smile on his face. It is a surprisingly triumphant image and a perfectly satisfying way to end such a glorious adventure.

The ending of The Legend of Zelda: Link’s Awakening will always have a special place in my heart. It is easily one of my favorite sequences in the Zelda series and one of the most memorable videogame moments of all time.