Have you ever experienced a videogame moment that has blown you away, but then come to find out most people didn’t even think twice about it? Granted, this happens to me more often than not since everything I experience in life is either the best or worst thing ever (OMG LOOK AT THAT AMAZING CLOUD!), but once and a while I am surprised certain moments don’t universally affect more gamers.

There are numerous incredible moments throughout the revolutionary puzzle game (available for many systems, but I happened to play it on the Xbox 360), but one in particular literally took my breath away. After I experienced it I immediately told all of my friends, and instead of getting a “ZOMG!” reaction I received more of a “ … cool.”

What were my friends thinking? How could they not be as unbelievably impressed as I was over this glorious piece of game design? Find out what gets me so darned excited after the jump. 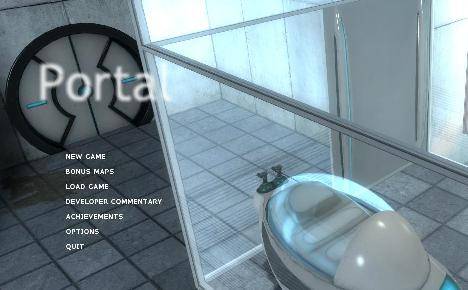 Since this game is ridiculously popular amongst the Internet community I am sure most of you know how it all starts: In the game you play as Chell, a supposed orphan who is adopted by mega-company Aperture Science to take part in “helpful” experiments.

At the very beginning of the game, Chell wakes up from a stasis bed and receives instructions from a computer artificial intelligence named GLaDOS that she will be participating in testing out a new portal gun for Aperture Science. 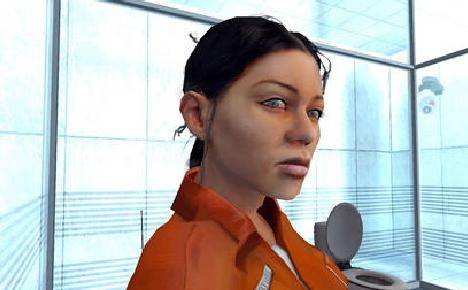 At this point the player takes over control through the eyes of Chell as she finds the portal gun and begins to test out its uses. 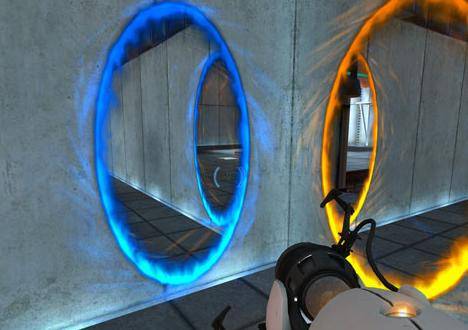 While it all seems a little basic at first, the act of portal travel is much deeper than it sounds.

Chell can easily place two portals on two adjacent walls and simply walk right through them, but as the game progresses more creative uses for these portals are needed. Say Chell needs to get to a high platform. By shooting the ceiling above the platform and then shooting a nearby wall, Chell can jump through the close portal and fall onto the top of the platform. It’s scenarios like this that make Portal equal parts challenging and brilliant. 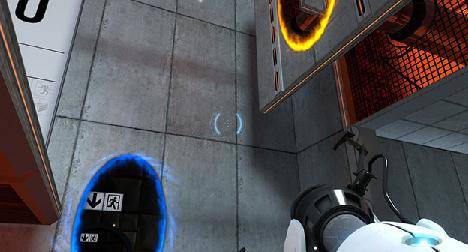 Throughout her journey through the text chambers of Aperture Science, Chell is constantly told by GLaDOS that she will be rewarded with cake and counseling upon finishing her training. All of these promises are presented using some of the most hilariously deadpan voice acting in the history of videogames.

After traveling through eighteen progressively harder test chambers, Chell arrives at the last room, trusting GLaDOS that her cake is only a few obstacles away.

It is here in the final test chamber when the next Memory Card moment occurs: a fiery demise?

The last challenge room in Portal is surprisingly not that tough. By utilizing some slick portal placement, Chell activates a moving platform that takes her through a series of narrow hallways towards her final goal. 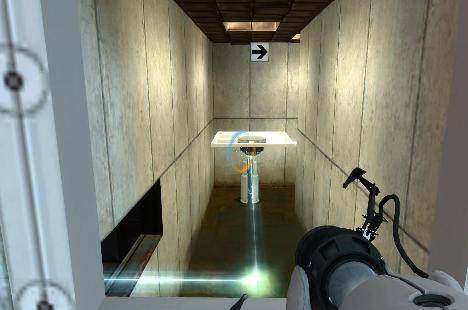 As Chell gets closer and closer to the end of the hallways, signs appear on the walls of the chamber displaying pictures of cake. GLaDOS congratulates her on a job well done.

Chell is excited. All of her hard work is about to be rewarded.

But as the moving platform gets near the end of its journey, Chell senses something odd.

The cake images grow more plentiful, but the walls in which they are displayed light up in a fiery red glow. 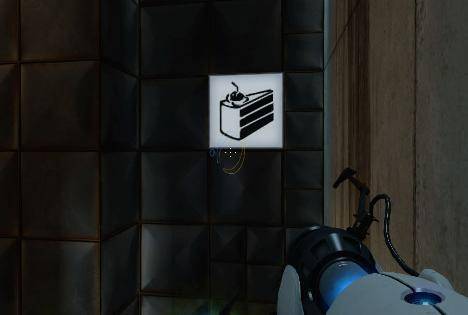 All of a sudden the moving platform turns around a bend and Chell witnesses something horrifying: The platform she is riding is unexpectedly descending into a giant pit of fire!

Chell looks around, but there is nothing she can do. She is still trapped in such a narrow corridor. 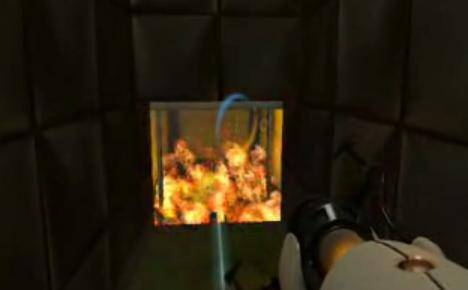 GLaDOS coldly speaks up and thanks Chell for participating in the Aperture Science experiment and recites her final good-bye.

Seconds before entering the giant flames, the moving platform Chell is riding emerges into a larger room. High up on the far end of the room is a small walkway surrounded by a metal railing. 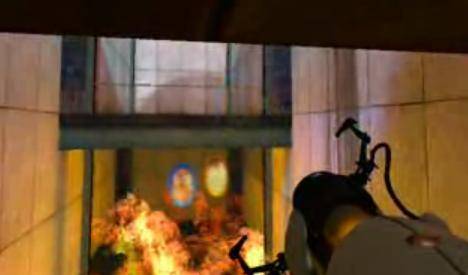 Acting fast, Chell uses her portal gun to create a portal on the wall next to the walkway. She then forms her second portal on a wall close to her, right above the fire. Once both portals are locked in, Chell leaps at the last second off the moving platform, into the nearby portal, and emerges safely on the far walkway. 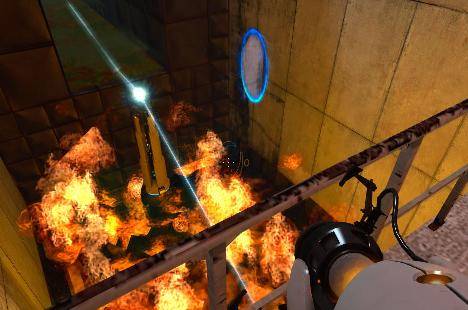 She is safe. Traumatized, but safe.

At this point GLaDOS chimes in with one of the funniest lines in the history of videogames:

“Congratulations on making it through the final challenge where we pretended we were going to murder you. We are very, very happy for your success. We are throwing a party in honor of your tremendous success. Place the device on the ground and lie on your stomach with your arms at your side. A party associate will arrive shortly to collect you for your party.”

With this, Chell makes her way behind the walls of the Aperture Science testing chambers. 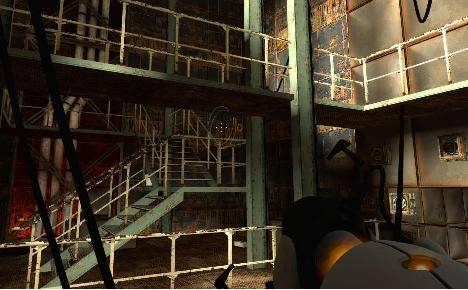 By using her portal gun in new and creative ways, she eventually makes her way to the heart of the facility to confront GLaDOS once and for all.

Call me stupid, but I genuinely thought watching Chell die in a fire was the actual ending of Portal.

Before you start laughing, let me explain why:

Throughout the game, Chell journeys in and out of test chamber rooms that are designed to be manipulated with portals. That is the setting of the game and using your portals in creative ways makes sense in the context of the environment.

Of course I knew GLaDOS had shady intentions, as evidenced by her overly sarcastic, almost creepy monologues during the last few test chambers. So, to me, the big twist of the game was that GLaDOS was evil and this was all just a sadistic way of her leading you to your death. It was Chell’s destiny from the start.

So as I rounded the final corner on the moving platform and saw the giant fire pit in front of my character, I almost gave up and accepted my fate. Even visually there didn’t seem to be much of anything I could have done. It was just me, a long hallway, and a slowly approaching room of flames. What other choice did I have but to jump in?

This is when the game went from amazing to remarkably brilliant.

Portal is told from a first-person perspective, so you the player is basically seeing everything that Chell is. There are no external cutscenes or exposition to explain to the player what is going on. You discover the world at the exact same time Chell does.

And this is very important for why this sequence works so ingeniously.

As the moving platform creeps forward, the large room filled with fire slowly comes into view. The designers specifically chose for the long hallway to hide a lot of the last room until the last minute for several reasons — one of them being to make the player have less time to decide what to do next.

When the player finally sees the elevated walkway, you (and, in turn, Chell) have to make an organic decision to figure out a way to escape. The game perfectly puts you in the role of a panicked character desperate to get out of a deadly situation.

There is no instruction on how to do this; no signs or indication that escaping the testing facility is your next step. It happens because it is exactly what Chell (you!) would have done.

See? To most people this moment is probably no big deal. They most likely just quickly saw an opportunity, used the portal gun, and escaped certain death. But to me everything that is amazing about Portal all comes down to this one sequence.

Up to this point in the game there really is no reason to use your portal gun outside of completing the presented tasks at hand. Escaping the fire pit is the first time the player has to literally think outside the box and do something based entirely on instinct. What would Chell do? Not what does GLaDOS want Chell to do?

The fact that the rest of the game (as Chell travels through the belly of Aperture Science) uses this same unstructured gameplay really is just the icing on a delicious, perfect cake (pun intended).

The entirety of Portal is ingenious, but Chell escaping her fiery death really is where the game switches gears and becomes something much more than a simple puzzle game. While most people focus their love (deservedly so) on the Companion Cube or “Still Alive” portions of the game, I will always hold the fire sequence closest to my heart.

My God, I am so happy the cake really was a lie.