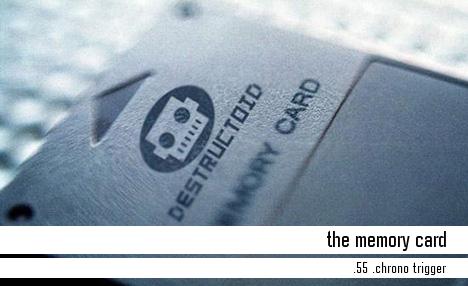 Here’s the scenario: You are playing a videogame and reach an unexpected gameplay twist. Confronted with a timed sequence, your taken-by-surprise skills fail you and the sequence ends unsuccessfully, resulting in an irreparably tragic set of circumstances. Unfortunately, this being a retro game, there is no autosave at a nearby checkpoint. If you restart the game to retry the sequence you will have to go back quite a ways to the last save point.

What do you do?

In most videogames this would be an easy decision: accept the result of failure and move on — playing back through hours of the same game again isn’t worth it. But, sadly, this is no ordinary game. The retro videogame in question is Super Nintendo masterpiece Chrono Trigger. And as fans of the game know, events in the incredible Chrono Trigger are taken very personally (says that guy still shaken by what happens to Crono).

Hit the jump for one such event that had my finger hitting the reset button and my heart jumping into my throat.

Even though Chrono Trigger contains many traditional JRPG stories featuring classic heroes and all-powerful villains taking over the world, one thing that sets it apart is its use of time travel as a major plot device. Because of this creative addition, Chrono Trigger is remembered as one of the most memorable and unique role-playing games ever created.

Chrono Trigger begins with main character Crono waking up and heading to the Millennial Fair to watch his best childhood friend Lucca and her father unveil their new invention: a teleportation device. While Crono excels at yielding a sword, Lucca is a master of mechanical devices, taking after her inventor father. In fact, her household is full of various mechanical devices, all watched over by Lucca’s mother, a kind woman confined to a wheelchair after an unfortunate accident ten years earlier.

While at the fair, Crono runs into the troublesome Marle, a mischievous girl who turns out to be the princess of the local kingdom Guardia. After literally bumping into her, the two head to the north end of the Millennial Fair to meet up with Lucca and her father.

Unfortunately, something goes horribly wrong during the teleportation device’s debut and Marle is shot back in time 400 years.

This is when the deep time traveling mechanic first kicks in and shows the player how fragile past timelines can be.

You see, by going back in time 400 years, Marle, Crono, and Lucca change the past just enough to threaten Marle’s very existence.

Luckily, the trio makes things right again and returns to the present.

At the point Crono and friends begin an epic quest that takes them through many different time periods in order to stop the evil force Lavos from destroying the world.

After picking up many different allies from different eras (Frog in the past, Robo in the future, and Ayla in the, well, way past), Crono, Marle, and Lucca find themselves in the possession of their own time machine — the Epoch — that allows them to travel to and from different moments in time without having to journey to a place known as the End of Time.

Once the party upgrades the Epoch with wings — allowing it to fly freely around the overworld — they have the opportunity to participate in numerous sidequests scattered all around time. These sidequests are not necessary, but offer tremendous character development and some pretty darn clever instances of time travel.

One of these sidequests involves restoring a dead forest. It is during this quest when this week’s Memory Card moment occurs: the fate of Lucca’s mother.

I won’t get too much into the details of the specific sidequest, as they are very complicated, but I will say this: restoring the forest is one of the most rewarding and creative quests in the entire game. It basically involves ally Robo as he is left in the past to help re-grow a forest full of dead trees. When Crono and party revisit the same location 400 years later Robo has restored the forest, but has broken down after centuries of hard work.

Using all of her mechanical skills, Lucca manages to reactivate Robo and return him to his former Rick Astley-themed glory.

After celebrating, the party decides to camp out under the stars.

In the middle of the night Lucca wakes up and walks into the newly grown woods. Here, she sees a strange time portal under one of the trees.

Curious as always, Lucca activates the portal and steps inside.

When she emerges, Lucca realizes that she is in her own bedroom.

Lying on the floor next to her bed is a page from a journal reading:

Wait, 990AD? That’s ten years ago! And why does Lucca hate science? What is going on?!

After reading the journal entry Lucca heads down some nearby steps.

Upon walking downstairs, Lucca enters the kitchen. Here, she finds another note. This one strangely reads:

The password is …
The name of my lovely wife.
Use it in an emergency.
-Taban

After putting down the odd note, Lucca walks into the living room and makes a shocking discovery: she sees her non-wheelchair ridden mother walking around cleaning off some of her father’s machines. Even more shocking, Lucca also sees a younger version of herself strolling around the house as well. Lucca has, indeed, gone back in time ten years!

Before Lucca even has a chance to take another step forward, her past mother steps towards one of the mechanical devices and starts to dust it off. Suddenly, her skirt gets caught in one of the conveyor belts and she is pulled towards the machine’s dangerous, grinding gears.

Older Lucca immediately realizes she is about to witness the moment her mother was paralyzed.

Suddenly, younger Lucca springs into action and tries to help her mother. Sadly, it is to no avail — the shirt is just too stuck.

Lucca’s mother moves closer and closer to the gears.

At this point, Lucca and the player realize they have the power to change the past! By moving quickly, Lucca can locate the control panel for the machine. Once accessing the controls, the machine asked for a password.

Quickly, Lucca enters the machine’s password (cleverly, the player actually hits the L button, A button, R button, and the A button again). The conveyor belt comes to a stop inches before Lara’s legs are sucked into the gears. Lucca’s mother is saved!

With this, the screen fades to black.

When the game returns, Lucca is in her bedroom once again, crying tears of joy while hunched over her bed.

A new journal entry is seen scattered on the floor.

7/2/990AD
I feel like I’ve learned something! I’ll study machines now. There’ll be no more accidents around here.

It is here when the player learns why Lucca became interested in machines and inventions in the first place: to prevent her mother from ever being hurt again (cue heart entering throat).

As the journal page quietly falls to the floor, Lucca enters the time portal once again.

Back at the campsite, Robo greets Lucca as she returns to the present. He tells his friend that she is a wonderful person and, in turn, gives her a rare item to help her on her journey.

Lucca thanks her robot ally and returns to her sleeping friends. As Lucca closes her eyes, she thinks about what it will be like seeing her mother without a wheelchair for the first time in many years.

Lucca drifts off to sleep with a smile on her face.

You can watch Lucca journey to the past and save her mother right here (the action starts around 2:58):

What makes this scene so special is the fact that you don’t have to save Lucca’s mother at all. In fact, the sequence is on such a short timer that it is really hard to do it. Entering the password is harder that it looks, and more often than not this moment ends in horrible tragedy.

And that is when the player has to make a decision. It’s only a videogame, sure, but do you want to finish the game knowing Lara is still paralyzed, or do you choose to reset and retry the sequence as much as it takes in order to change the past?

Because Chrono Trigger has such memorable characters, the choice is very simple.

For me, I tried this sequence over and over again until I saved Lucca’s mother from her tragic fate. And, luckily, it was worth it! One of the cool things about Chrono Trigger is how things you do in the past actually change the game in the present. By saving Lucca’s mother she actually loses her wheelchair whenever you visit her in the future! It is an amazing addition and really adds to the game’s overall charm and uniqueness.

There is another reason this sequence is so memorable, but it is a little more subtle.

A lot of videogames — specifically RPGs — have trouble revealing their character’s dramatic backstories outside of the instruction manual or awkward in-game exposition. In Chrono Trigger, the time travel sidequests are the perfect device for revealing more about each of the main playable characters. By incorporating these character reveals into the actual gameplay, everything is told in a seamless manner.

Because of this, in my crazy, nerdy world, I like to pretend the creators of Lost were actually inspired by Chrono Trigger’s structure. Yup, you heard it here first.

Even taking out the “changing time” aspect, saving (or not saving) Lucca’s mother would still be one of my favorite videogame moments of all time. The emotions displayed in the scene unfold beautifully and really make you feel for (and maybe even love) Lucca more than you already do.

It’s all in the details: the journal entries scattered on the floor; the way that younger Lucca dresses; the pauses thrown in while Lucca cries on the bed; heck, the way Lucca cries despite the scene’s outcome is absolutely brilliant (she cries tears of sadness if you fail — tears of joy if successful).

Everything about Lucca saving her mother is classic. Yet one more reason why Chrono Trigger is one of the most cherished videogames of all time.