There is category one, the more commonly seen of the two, when a main character such as Mario or Samus falls into a pit or depletes his/her health bar and just quickly returns to the last checkpoint to tackle the challenge once again (see: basically every videogame ever created).

Then there is category two, in which a character in the game actual dies permanently because the story takes a dramatic and unexpected twist. This category of videogame death usually occurs in a role-playing game and, more often that not, results in said deceased character magically rising from the grave to appear later in the game (see: Final Fantasy IV).

In the very rare case, though, death hits a videogame character in a completely unexpected way. The perfect example of this is in the recent Call of Duty 4: Modern Warfare. In this game, death rears its ugly, tragic head when the player least expects it.

Witness a moment that blurs the line of what can happen in a videogame.

To say I wasn’t a fan of FPSes years ago is a complete understatement. I was so snobby when it came to the “hardcore” genre that I refused to even touch a Halo disc. But all of this changed with Call of Duty 4: Modern Warfare. While I loved more story based FPS games like Half-Life and BioShock, Modern Warfare was the first “traditional” first-person shooter to truly blow me away and actually get me interested in the genre. Look, I am even rubbing Halo 2 all over my face right now to prove it! 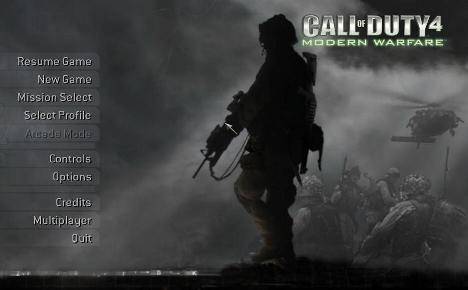 In Call of Duty 4: Modern Warfare you actually play as two characters: Sergeant “Soap” MacTavish and Sergeant Paul Jackson. Technically, six characters are controlled throughout the game’s entirety, but MacTavish and Jackson are featured in the majority of the levels. 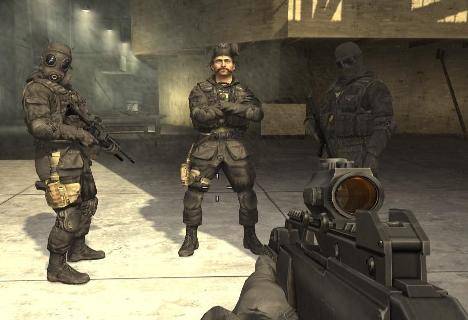 As the game begins, MacTavish and some fellow soldiers infiltrate a ship in the middle of the ocean. After finding a nuclear device and discovering a dangerous tie between Russian terrorists and a rebel faction in the Middle East, the ship begins to sink and MacTavish and crew barely manage to escape.

From this point on, the game alternates control between MacTavish and Jackson (and occasionally a surprise one-level character) as they both attempt to stop the Russian and Middle Eastern antagonists from obtaining and detonating a large nuclear arsenal. (Of course, the plot is far more complicated than that, but do you really want to read paragraph after paragraph of fancy war talk that I, honestly, don’t really understand?)

A little before halfway through the game, control once again falls into the boots of Sergeant Jackson as he attempts to infiltrate the Middle Eastern stronghold where one of the main terrorists resides. 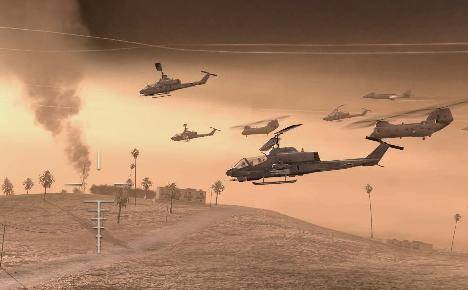 The level opens with an epic helicopter sequence, with Jackson behind the controls of a giant turret. After destroying a number of enemies and securing a landing spot, the helicopter touches down and Jackson and company head off to find and hopefully vanquish the terrorist threat.

As the U.S. team of soldiers searches the compound, they are informed by Central Command that a nuclear bomb has been located inside the terrorist stronghold. Instead of continuing their quest, Central Command recommends that all forces evacuate the area while a special team comes in to try and disarm the bomb. 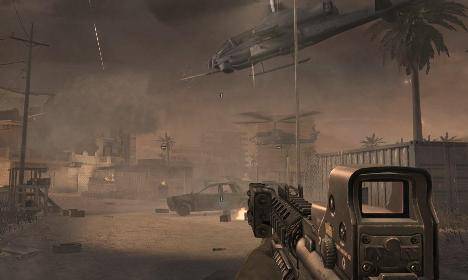 With these new orders, Jackson and his team set off to help rescue a platoon pinned down by enemy fire and, well, get the heck out of there!

After saving his allies, Jackson jumps in the back of the helicopter and takes off into the bullet-filled sky.

It is here when the next Memory Card moment occurs: the nuclear blast.

As the helicopter flies away into the distance, Jackson hears Central Command come on his radio and tell him that the special team has reached the bomb and is attempting to disarm it.

Before Command can even finish its sentence, a huge explosion turns the sky white. 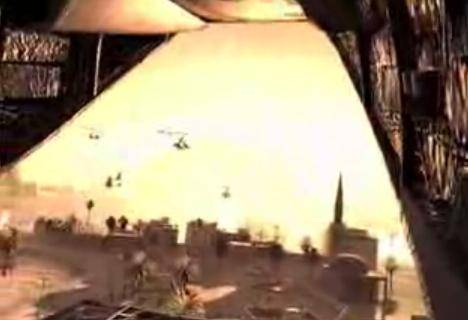 The nuclear bomb has detonated.

Flying as fast as possible, the helicopter containing Jackson and his team can’t seem to outrun the quickly approaching explosion. 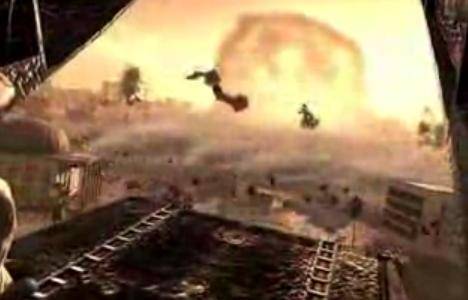 In an awful, visceral turn of events the helicopter crashes to the ground. 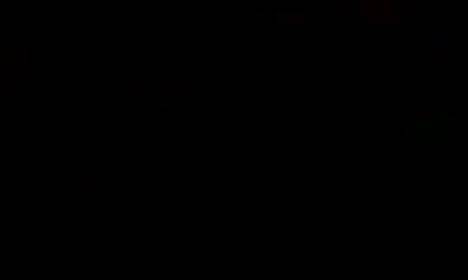 After a montage of various news stations reporting on the nuclear blast, the screen fades back up into Jackson’s first-person perspective once again.

He is hurt, but still alive. 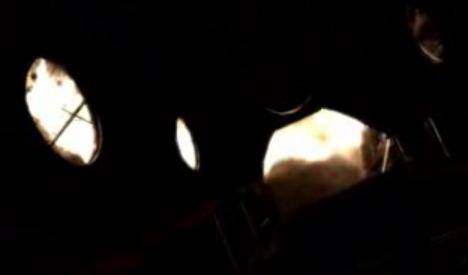 Looking around, Jackson realizes he is still in the crushed remains of the helicopter. He can see the bodies of all his allies littered around him in every direction.

Jackson breathes in the dirty air, any kind of movement sending immense pain through his body.

Crawling outside the wreckage, Jackson sees a tragically beautiful mushroom cloud filling the Middle Eastern sky. Ashes from God knows where dance in the wind around him. 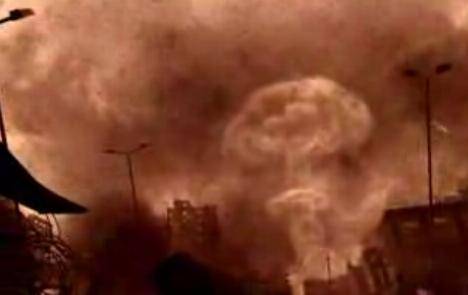 Jackson’s heartbeat echoes in his ears.

Using all his remaining strength, Jackson pulls himself along the destroyed grounds of the city, hoping to find some way to save himself from this terrible situation.

As he moves forward he sees a destroyed playground out of the corner of his eye. 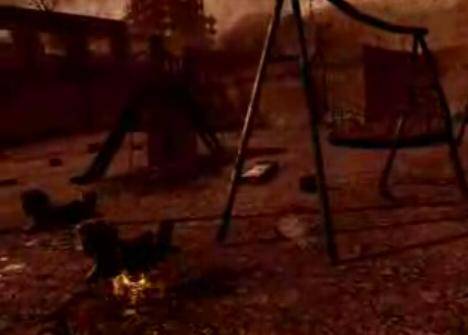 The city around him is gone. No one is there to help him.

With the sounds of his radio fading away, Jackson collapses to the ground and takes one final breath. 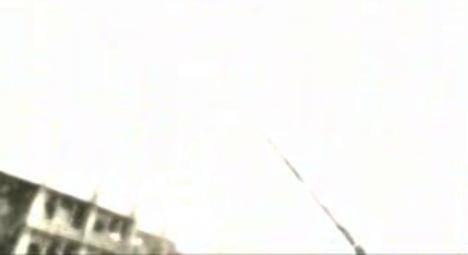 And with that, the brave Sergeant dies.

At this point in the game, control returns to MacTavish as he vows revenge on the terrorist that caused such chaos to the world.

You can watch the entire mission — from the helicopter rescue to the nuclear blast — right here:

The unexpected nuclear explosion and violent death of Jackson are completely shocking on their own, but keep in mind that all of this is presented completely in-game and from a first-person perspective. Everything — from the explosion going off in the distance to the gruesome death scene — is shown through Jackson’s eyes. This immersive viewpoint only adds to the emotional devastation of the scene.

Unfortunately, I didn’t play Call of Duty 4 until a few months after it was released, so I had heard some rumblings about a scene like this happening.

But, honestly, my small amount of prior knowledge did not ruin the scene’s overall impact one bit.

The nuclear bomb going off is surprising enough, but I never in a million years would I have expected one of the main characters in the game — a playable character, for that matter — to die from it. And not just die! During this scene Jackson goes through absolute torture and excruciating pain as he basically burns to death from the nuclear blast.

And what makes it all hit home is that you, the player, control it all.

When Jackson regains consciousness after the helicopter crash you are in full control of him. Granted, you can’t do much given the fact that he is so close to death, but the player can still control him as he crawls around to figure out what to do.

At this point in the game I actually thought Jackson would be okay. True, not many people survive a nuclear blast (where is a refrigerator when you need one!), but Jackson was one of the main characters in the game — of course someone was going to swoop in, rescue him, and nurse him back to health.

But that doesn’t happen.

Instead, Jackson just crawls along the ash-covered ground and dies alone and in horrible pain. And the fact that all of this is presented in a first-person perspective means the player is experiencing everything. In a way, this is all happening to you.

But it’s not only the first-person viewpoint that makes the scene work so devastatingly well. It is the combination of all the little details that, for lack of better term, take my breath away.

Watch the last two minutes of the above scene again before reading on.

Listen to the way the sound effects are ingeniously used throughout the sequence. The way Jackson breathes; the sound of his heartbeat; the distant, ghostly sounds of people screaming. It all comes together so well.

Now pay attention to the visuals. The game’s director had to make some pretty creative choices as to how to present the entire final scene. Choosing to slowly fade in as Jackson is at the back of the crashed helicopter is extremely effective. Not only does it take the player (and in turn Jackson) a few seconds to figure out where they are, hiding the mushroom cloud reveal until a minute later when the player has to physically crawl out of the downed helicopter works wonders. Seeing the mushroom cloud for the first time is both awe-inspiring and horribly depressing. The minute you see it you know Jackson is lost.

And then, of course, the player controls Jackson as he crawls his last few feet before dying. The stunning visuals of the surroundings combined with the haunting sound effects create a truly staggering and breathtaking videogame scene.

Call of Duty 4: Modern Warfare surprised me with its revolutionary presentation and dramatic story. While the whole game is stellar, the nuclear blast sequence easily ranks as one of the most powerful and memorable videogame moments of all time.