No matter how pretty the graphics or epically huge the enemy, if a boss fight is not creative, it fails to impress. Not to single out one game, but ActRaiser is the perfect example of this. The bosses in that game — while displaying some of the most gorgeous sprite art ever — are nothing more than giant enemies on the screen that the player has to hack and slash as quickly as possible (and, yes, there are a few exceptions to this — don’t yell at me!).

A truly great boss fight is a combination of many things: beautiful art design, unique presentation, and satisfying, surprising gameplay. And I italicize “surprising” for a reason. Nothing is better than a great boss that reveals a twist the player never sees coming (whether visually or concerning gameplay). These moments are what this feature is all about!

One of my favorite surprising (italicizing is fun!) boss fights occurs in the Super Nintendo masterpiece The Legend of Zelda: A Link to the Past. Let’s relive a great encounter in one of the best games of all time.

Although it alternates with Super Metroid depending on the mood I am in, The Legend of Zelda: A Link to the Past is my favorite videogame of all time. Everything about the Super Nintendo masterpiece — from the level design to the stunning 16-bit graphics — is perfect. Absolutely, amazingly perfect. 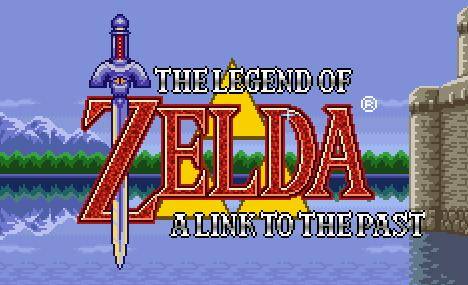 Instead of getting too much into how the game starts, you can click here to read my other Memory Card focusing on A Link to the Past. For this I will just focus on the events that lead up to this week’s awesome moment.

In A Link to the Past, like every other Zelda game, you play as Link, the iconic hero dressed in green that sets out to save the kingdom of Hyrule from the evil Ganon.

At the very start of game, Link is awoken from a deep sleep by the voice of Princess Zelda. The princess beckons Link to rescue her from the dungeon of Hyrule Castle. She tells him the castle has been taken over by the evil wizard Agahnim (who, turns out, is actually Ganon in disguise). 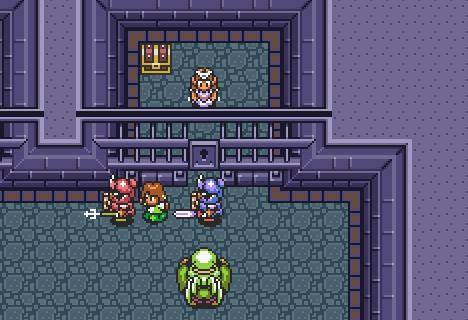 After making his way to the dungeon, Link rescues Zelda from the clutches of a powerful knight.

At this point in the game, Zelda actually follows Link around until he can deliver her to the safety of a nearby sanctuary. This gameplay is pretty clever, as — although she can’t be hurt be enemies — Zelda mimics every step of the player.

Once bringing her to the sanctuary, Link and Zelda part ways and the game’s epic adventure truly begins. 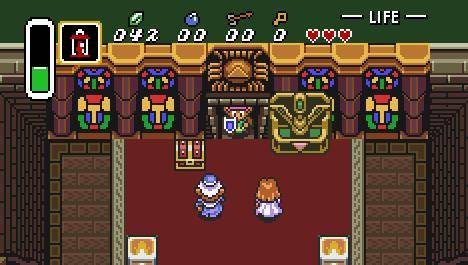 Following in the grand tradition of past Zelda games, A Link to the Past follows Link as he journeys in and out of incredibly designed dungeons. Each one of these dungeons — while very different — offers a similar layout: Link enters, finds a hidden item, locates the boss, defeats it, and leaves victorious!

During one dungeon later in the game, things play out a little differently.

Hidden under the statue of an abandoned, destroyed village, Link enters the hideout of Blind the Thief. 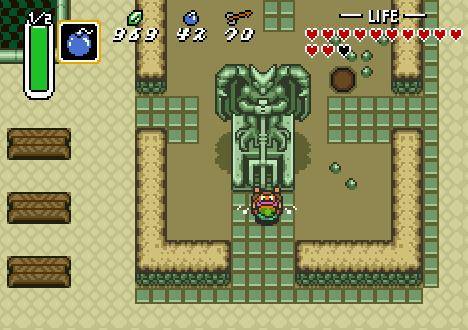 Traveling through the dungeon, Link discovers a strange room at the lair’s north end. Unlike any other room in the dungeon, this room is completely empty. 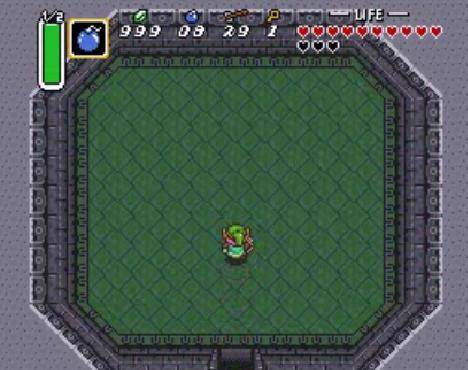 Perplexed, Link moves on and ascends higher into the hideout. 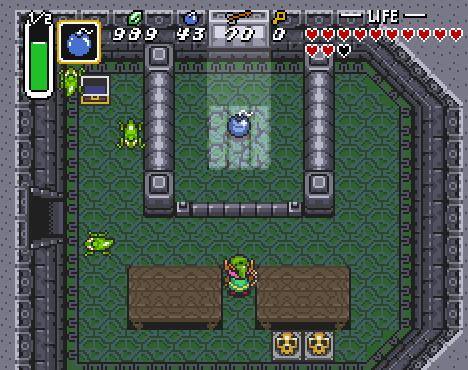 Eventually, he enters a series of rooms full of bombs and conveyor belts. After solving a simple, satisfying puzzle, Link blows a seemingly random hole in the floor of the dungeon. Strangely, a giant beam of sunlight that streams through the room’s large window happens to fall right on top of the newly formed hole Link just created. Coincidence? In a Zelda dungeon, nothing is coincidence. *foreboding music*

At this point — minus the strange empty room — the dungeon doesn’t seem that out of the ordinary. But about halfway through Link stumbles upon a random princess held captive in the basement of the complex hideout. 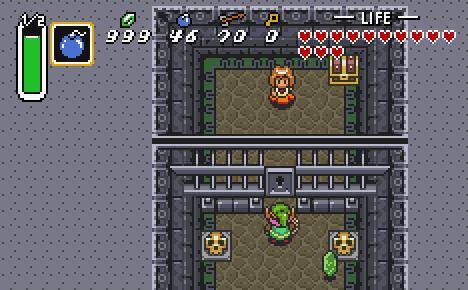 After releasing the damsel in distress from her cell, things take an interesting turn. This is when the next Memory Card moment occurs: Blind the Thief.

Immediately after being rescued, the princess expresses her gratitude to Link. She then quickly asks Link to take her outside to the village.

Being the hero he is, Link complies.

Similar to what happened when Link saved Zelda early in the game, the princess in the dungeon starts to follow Link around. Wherever he goes, she goes.

With his new companion in tow, Link heads to the exit of the dungeon, wondering why there is no boss in this dungeon like usual.

Before leaving the dungeon, the princess informs Link that they are going the wrong way. Confused, Link turns around to find another place the princess might want to go.

And then it hits him: the empty room! There must be something there she needs!

Hurrying along, Link escorts the princess to the strange room.

Upon entering, Link notices that a huge beam of sunlight fills the center of the room. Apparently the “random” hole that Link blew in the floor just minutes earlier was in a room directly above the one he is currently standing in.

As Link steps forward, the princess is bathed in the bright light.

“Gyaaah! Too bright!” the princess exclaims. 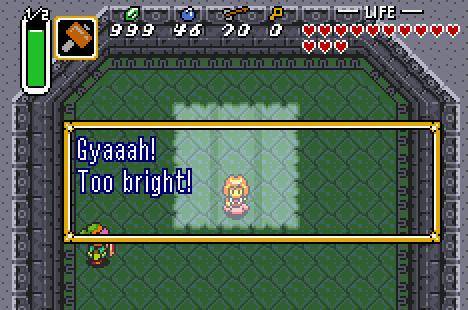 Suddenly, the princess disappears in a puff of white smoke. Appearing in her place is Blind the Thief, angry that Link revealed his true form. Blind had been disguised as the princess all along as a means of luring Link to him! Being a thief in the dark, cloud-covered skies of the village, the light from the powerful sun above is the only thing able to break Blind’s powerful spell.

The door slams and locks behind Link, trapping him and the thief in the room.

The battle that ensues unexpectedly becomes the dungeon’s boss fight. Unbeknownst to Link, he was escorting the boss the entire time! 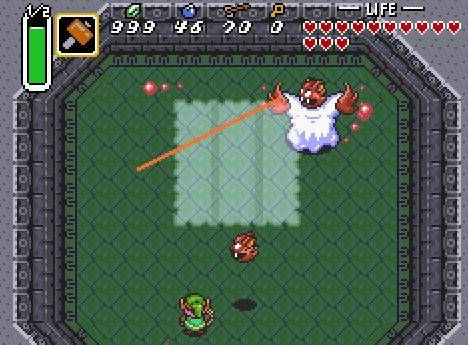 After a surprisingly tough battle involving laser beams and multiple flying heads (amazing!), Link defeats Blind and continues on his journey to save Hyrule.

You can watch Link find the princess and his eventual battle with her/his true form right here:

As an actual boss fight, the battle with Blind the Thief is not one of the best in A Link to the Past. That is not to say it is bad by any means. To the contrary, in fact — all of the boss fights in A Link to the Past are exemplary and super well-designed. This boss in particular, though, is a little smaller than most and displays a very random and hard to dodge attack pattern.

What makes this boss battle so memorable is the way it presents itself.

As I mentioned earlier, Zelda dungeons follow a very similar mold: The boss always hides itself in some random room that is marked once Link finds the dungeon’s compass.

In this case, the boss doesn’t just nonsensically wait in a random chamber. Blind the Thief incorporates himself into the actual dungeon, thereby becoming a more organic part of its design.

I don’t know about you, but I truly didn’t know that the princess I located at the bottom of the dungeon was Blind. I had no idea. In fact, I never thought once that the princess was even a bad guy. Sure, I did feel like the inclusion of the princess escort was a bit odd (for all the reasons I explained above), but, if anything, I thought the princess would just help me battle the final boss or something.

To have the princess turn into the final boss of the dungeon is a huge surprise. A huge surprise in a series not known for its deviation from the norm (especially concerning its classic boss battles).

In addition to this shocking boss reveal, I also love the way sunlight and the acquisition of said sunlight plays out throughout the dungeon. To me, this is the perfect example of how superbly designed Zelda dungeons are. (And, honestly, “superb” isn’t a strong enough word. I would argue that Zelda dungeons are the bet designed levels in videogame history.)

The empty room sits quietly at the back of the dungeon with no explanation of why it is there. When Link travels to the higher level and blows open the hole in the floor, the player notices that the sunlight is coming through, but doesn’t understand why. Link can even go back down to the empty room and see the newly formed sunlight beam before finding the princess.

In lesser designed games, all of this would be explained beforehand. Maybe the game would instruct the player that the only way they can defeat the boss is to complete all these tasks, including bombing the floor, revealing the sunlight, etc.

A Link to the Past doesn’t hold the hand of the player. It lets Link, and in turn the player, figure out all of this on his own. Link blows open the floor, reveals the sunlight, finds the princess, leads him to the room, and fights Blind the Thief all because it organically makes sense in the context of the happenings in the dungeon. All of the design choices put trust in the player to do the correct thing. It’s some incredible design and sorely missed in the games of today.

If you want to be a stickler, you could argue that it makes no sense that Blind the Thief, disguised as the princess, would not want to go out the entrance of the dungeon — instead conveniently leading Link to the empty room — even though he specifically asked to go there when you first find him in the cell. But, honestly, that is one small blemish in an otherwise perfect sequence of events.

A Link to the Past is an absolute masterpiece, and the creative, unique genius on display during the Blind the Thief moment is the perfect example of why it is my favorite game of all time.

Oh, settle down, Super Metroid. I love you, too.