The Secret of Monkey Island

Humor is a tough thing to get across in videogames. Unlike movies, videogames can sometimes last up to fifteen to twenty hours. Trying to keep players giggling for that long is an almost impossible task.

It seems the only way designers can successfully pull off a genuinely funny videogame is to delve deeper than just a goofy script full of cheesy puns and old ladies falling down (although that would keep me entertained just fine). A funny videogame needs to somehow mix in humorous gameplay with its smart, quick-witted story.

A perfect example of this is in classic PC adventure game The Secret of Monkey Island. Not only is this game full of highly quotable dialogue (“That’s the second biggest monkey head I’ve ever seen!”), it manages to seamlessly blend its laugh at loud script with some pretty darn clever gameplay.

While I hate to single out just one sequence in a game full of so much hilarious win, let’s relive a moment that I think shows off some of the most creative gameplay in the history of videogames. And, yes, my hyperbole is on fire today!

Everyone close your eyes (after reading this, of course) and let’s reminiscence about a true golden age in gaming: A time when the PC was brimming with ridiculously high quality adventure games. It was a glorious era, wasn’t it?

One of the companies leading this adventure gaming renaissance was LucasArts, a developer famous for some of the most memorable and classic games in the genre. Although it wasn’t their first game, The Secret of Monkey Island is what arguably put LucasArts on the map and made stars of designers Ron Gilbert and Tim Schafer. 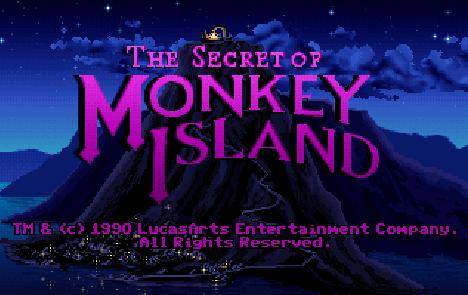 In the timeless masterpiece you play as Guybrush Threepwood, a young man with one desire: to become a pirate!

Like most LucasArts adventure games of the time, The Secret of Monkey Island utilizes a specific point-and-click interface called SCUMM. While its technical specs are a little too complicated to get into here, the SCUMM engine was most notable for its inclusion of verb/object interaction. Basically what that means is this: At the bottom of the screen is a large list of verbs (as well as a handy inventory system). Using the on-screen cursor, players can click on any person, object, or location in the game on the top part of the screen and combine them with a chosen verb to solve puzzles and progress through the story. It’s a pretty revolutionary system and The Secret of Monkey Island takes full advantage of it. 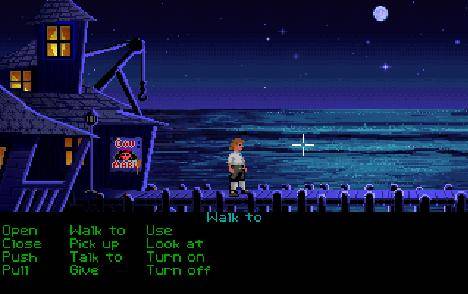 At the very beginning of Monkey Island, Guybrush washes up on the shore of the mysterious island of Mêlée. After exploring this new land for a bit, Guybrush runs into a cast of very eclectic characters — from a man with two hooks for hands to the island’s beautiful governess, Elaine Marley.

Within the first few minutes of playing Monkey Island the player gets a feel of the game’s truly bizarre sense of humor. Each and every location — although beautifully rendered and well-designed — is full of many surreal and genuinely funny situations.

One such situation arises early on, when Guybrush approaches a group of three “important-looking” pirate leaders (located in the Scumm Bar — hehehe). The pirates inform Guybrush that he must complete three tasks if he ever hopes to prove that he is one of them. 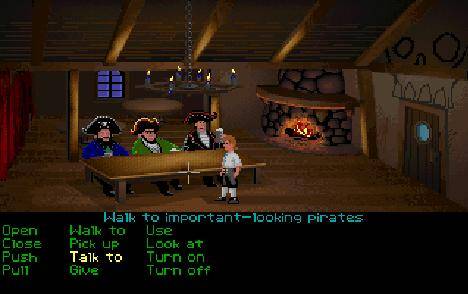 The first task is to steal a statue from Elaine Marley’s mansion, the second involves buried treasure, and the third — the focus of this article — is to defeat the sword master Carla in a round of insult swordfighting.

For people that haven’t experienced the greatness that is Secret of Monkey Island, “insult swordfighting” must mean nothing. But for everyone who fondly remembers it as well as I do, insult swordfighting will go down as arguably one of the most creative videogame fighting systems ever.

Once our hero Guybrush takes on the task of defeating Carla, this week’s Memory Card moment occurs: insult swordfighting.

After retrieving a sword to complete his task, Guybrush heads into the woods of Mêlée to train for his confrontation. 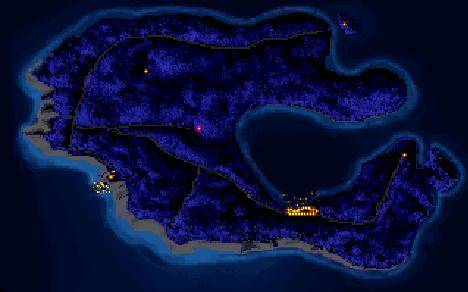 While most games would offer a traditional swordfighting mechanic, The Secret of Monkey Island throws in a very significant twist: insults.

When Guybrush meets up with a rival pirate while journeying across the island, the game switches to a side-view fighting mode, similar to something you would see in Street Fighter II. But instead of just button mashing and performing shallow combos full of thrusts and parries, the pirates of Monkey Island fight with their wits. 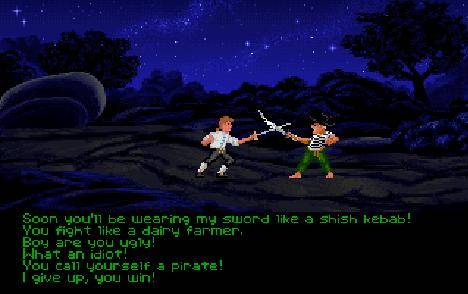 As soon as a battle begins, Guybrush throws out an insult using a selection of insults from the bottom part of the screen (the space usually reserved for the verbs and inventory). If the opposing pirate uses the correct retort, he wins a point and pushes Guybrush back using his sword. If he uses the wrong retort, Guybrush wins the point and attacks with his sword. This continues back and forth until someone receives three points and is declared the duel winner!

Regardless of what retort or insult the opposing pirate uses, once he says something it is added to Guybrush’s “memory.” In future fights, all the retorts and insults that Guybrush remembers are selectable from this “memory menu.” This is how Guybrush trains, by collecting as many insults and retorts as possible! 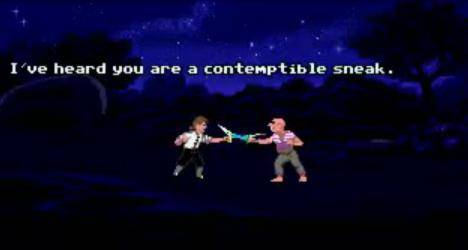 The trick, though, is knowing which insult and retort combination to use. If a pirate insults Guybrush and he just responds with a random retort he will lose. By listening to the specific insult, the player can guide Guybrush to choosing the correct (and, in turn, the funniest) response.

To see what I am talking about, here is a list of some of my favorite insult/retort combinations:

Insult – This is the END for you, you gutter-crawling cur!
Retort – And I’ve got a little TIP for you. Get the POINT?

Insult – Soon you’ll be wearing my sword like a shish-kabob!
Retort – First you’d better stop waving it around like a feather-duster.

Insult – Have you stopped wearing diapers yet?
Retort – Why, did you want to borrow one?

Insult – I’ve heard you are a contemptible sneak.
Retort – Too bad no one’s ever heard of YOU at all.

Insult – I’m not going to take your insolence sitting down!
Retort – Your hemorrhoids are flaring up again, eh?

Insult – I’ve spoken with apes more polite than you.
Retort – I’m glad to hear you attended your family reunion.

Once learning all of them (or as many as the player feels is necessary), Guybrush finds Carla and challenges her to the ultimate battle of insults. Since Carla uses almost all new insults in the fight, Guybrush must be extra prepared when taking her on. 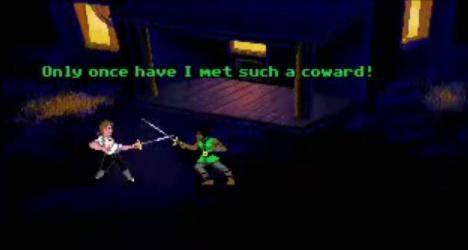 Instead of celebrating when all three tasks are complete, however, Guybrush is troubled to learn that governess Elaine Marley was kidnapped by the evil ghost pirate Le Chuck (best character EVER!). With sword master Carla in tow, Guybrush collects a surly crew, buys a boat, and sets off to Monkey Island to find the damsel in distress.

You can watch some insult swordfights right here (please just try to ignore the real-life commentary — sorry in advance):

It goes without saying that I adore the originality of insult swordfighting, but there are many other reasons why this brilliant slice of gameplay is so memorable.

First off — since the pirates you train against don’t always use the correct response — figuring out which retort to use against an insult is surprisingly tough. While it may seem easy in hindsight, during this time in my gaming life I was used to writing everything down on a piece of paper. Yeah, paper. There was no Internet of even (*gasp*) handy laptop computers to provide hints. Even using the examples I listed above, a lot of the retorts sound like they could fit with other insults. (Also keep in mind that I listed less than half of the total choices.)

When you have collected a large number of retorts, it is pretty tough to know exactly which one to reply with.

The trick is in the details.

Take the first insult I listed: “This is the END for you, you gutter-crawling cur!” The correct response is “And I’ve got a little TIP for you. Get the POINT?” Now, I know that seems obvious reading it back, but notice how clever the retort actually is. In the insult, “END” is capitalized. If you have a giant selection of retorts to choose from, this little detail helps you realize that “TIP” and “POINT” are also in capital letters. And that’s the key to matching everything up!

Again, “Too bad no one’s ever heard of YOU at all” is the prefect retort for “I’ve heard you are a contemptible sneak” because the word “heard” joins them together.

Now, I know this sounds easy, but keep in mind that the game doesn’t hold your hand at any point. You never know how many insults and retorts you have to collect before you fight Carla and sometimes you even learn more insults than retorts (or vice-versa).

Through trial and error (and a lot of pieces of paper), insult swordfighting eventually becomes second nature and all the combinations are memorized.

But it is the logical approach to each retort during the battle with sword master Carla that makes the gameplay so brilliant. During this specific fight, Carla uses mostly new insults, meaning simple memorization won’t apply. You have to somehow figure out which one of your already learned retorts will fit with each new insult. By sharing the same sense of humor as the game and watching for similar details, you can successfully figure out which reply to use. It’s really pretty ingenious.

Insult swordfighting is only one reason on a giant list of reasons why I love The Secret of Monkey Island. This witty gameplay, combined with everything else about the game, make it a timeless classic that I will not soon forget.

Ah, the sweet, sweet memories of a glorious time in gaming that has sadly disappeared over the years …