While a videogame’s story is one of the most important aspects of modern games, this wasn’t necessarily the case twenty years ago. True, retro designers would make sure to create a believable world for their videogame to exist in, but very rarely were stories integrated into the actual gameplay.

Think of something like Zelda II: The Adventure of Link. Besides the opening text scroll, there are never really any instances where a dramatic story presents itself — the entire game consists of almost nothing but (exceptional) gameplay. In fact, like Zelda II, most games of the early NES era relegated their elaborate backstories to the instruction manuals that came packed in the box.

It wasn’t until a little game called Ninja Gaiden for the original Nintendo Entertainment System came along that everything changed. With the release of this game, storytelling techniques in videogames changed forever.

This will easily be the shortest set-up in the history of this series. You see, this week’s Memory Card moment occurs the minute you start up Ninja Gaiden so there really is nothing to setup! I could go on and on about the subtle nuances of the game’s opening title screen, but I won’t put you all through that. Also, the opening title screen isn’t all that special. 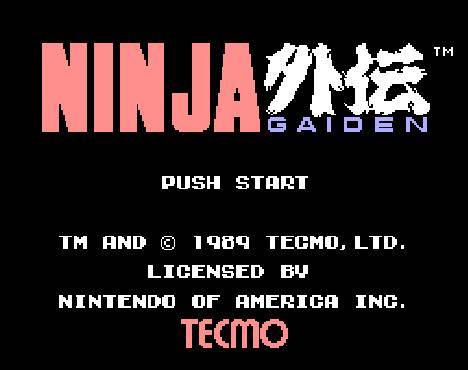 Released a few years after the NES debuted in America, Ninja Gaiden had a surprising amount of hype leading up to its release — it was even featured on the cover of one of the first issues of classic gamer magazine Nintendo Power.

While most people expected Ninja Gaiden to be an interesting, side-scrolling ninja action game, no one was prepared for the game to be truly groundbreaking.

Groundbreaking how, you may ask?

Well, after popping in the gray cartridge, booting up the game, and hitting start, this week’s groundbreaking Memory Card moment occurs.

Instead of just throwing the player into the action right away, after hitting start Ninja Gaiden presents a surprisingly elaborate opening cutscene. The first of many in the game, this particular cutscene shows an epic battle between two ninjas in the middle of an open field. 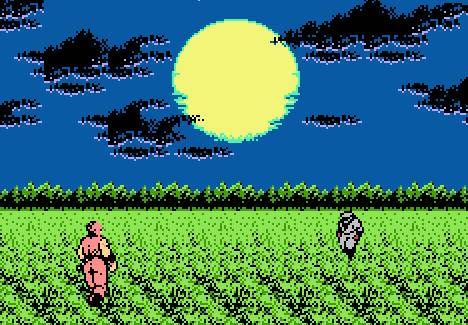 After a dramatic meeting of swords, one of the ninjas falls and dies, his body lost among the field’s grass and flowers.

After the man perishes he is revealed to be the father of another ninja named Ryu Hayabusa. During this reveal the scene switches to Ryu reading a letter from his now deceased father telling him about the duel he was about to partake in. Like most letters of this type, Ryu’s father mentions that if his son is reading this he has most likely already been killed. The letter then instructs Ryu to take his father’s mystical Dragon Sword and head to America to find a man named Walter Smith. 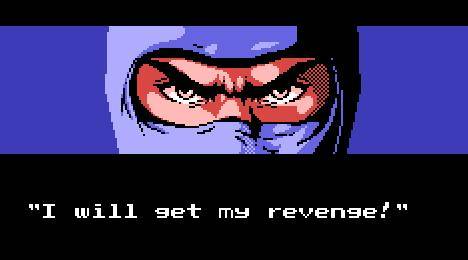 With this, the playable game begins. Luckily — after such an incredible opening — the actual game plays like a dream. Played like most traditional 2D action games, Ninja Gaiden stands out by offering superb controls, detailed 8-bit graphics, and a notorious difficulty.

As the player leads Ryu on a journey to find out what happened to his father, the game presents a new set of cutscenes between each and every “traditional” level (referred to as “acts” in the game).

It is these cutscenes that serve as this week’s Memory Card moment.

Each cutscene in Ninja Gaiden further expands the surprisingly deep story and truly offers some shocking and emotional plot twists.

Before he can meet Walter Smith, Ryu is captured by a young policewoman named Irene. Irene hands Ryu one of two demon statues, relics that when brought together will supposedly call forth an evil demon that will destroy the world. 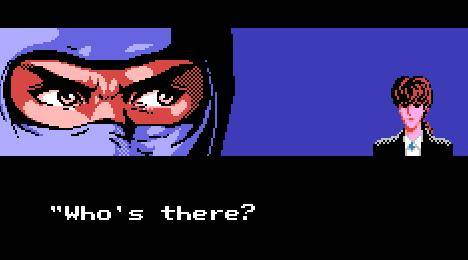 After befriending Irene, Ryu is let go and eventually meets up with Walter Smith. During their conversation, a mysterious figure swoops in and steals Ryu’s statue. Luckily, as Ryu jets off to steal his treasure back, he learns that Walter Smith has the other statue safely in his possession.

Of course, after successfully retrieving the statue, Ryu returns to find Walter Smith dead and his statue missing. Dammit! 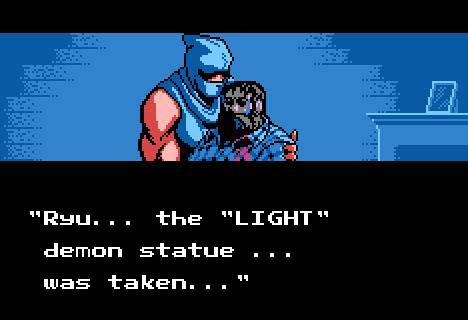 Before having time to do anything, Ryu is captured and brought to meet CIA agent Foster. Foster tells Ryu that they are tracking someone known as The Jaquio, an evil figure intent on finding both statues and reviving the demon. Willing to help, Ryu agrees to travel to South America to destroy Jaquio. 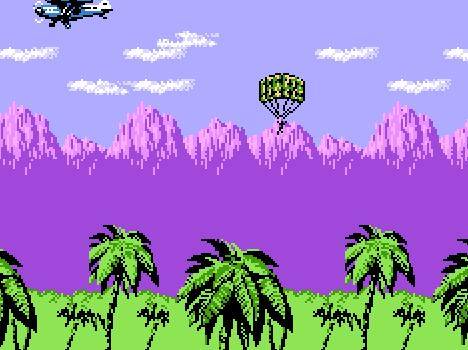 When he arrives, Ryu learns that Jaquio has captured Irene! In order to get her back, Ryu must hand over his statue, thereby allowing Jacquio to possess both statues. Although he hesitates, Ryu does not want to see his friend killed and gives Jaquio his statue. With this exchange, Ryu is thrown into a trap and forced to make his way through some dangerous catacombs to avoid death.

After making his way back to where Irene is being held captive, Ryu shockingly learns that his father — thought slain in the earlier duel — is still alive, although he is now possessed by Jacquio. 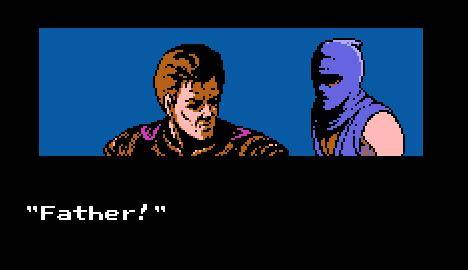 At this point a fight commences between Jacquio and Ryu. Once the battle is complete Ryu’s father is freed from his spell and returns to his former self.

Without a moment’s notice, Jaquio shoots an energy beam at Ryu.

Before it strikes him, though, Ryu’s father jumps in front of the beam’s path and saves his son. 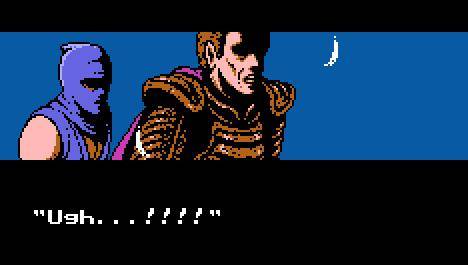 As his father’s body falls to the ground, Ryu catches him and watches as his noble paternal figure dies in his arms. 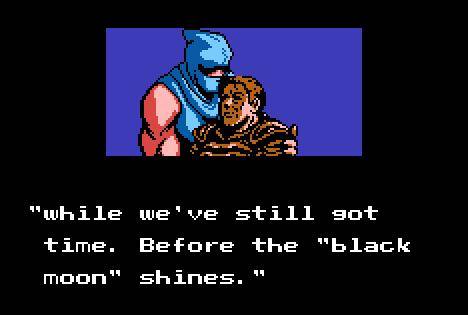 Filled with vengeance and rage from all the recent events, Ryu eventually destroys Jacquio and the demon that is raised from the reunited statues.

Ninja Gaiden ends as Ryu dramatically stands on the edge of a cliff; the night wind blowing through his ninja garb; Irene standing by his side; his new life defending his father’s death ready to begin. 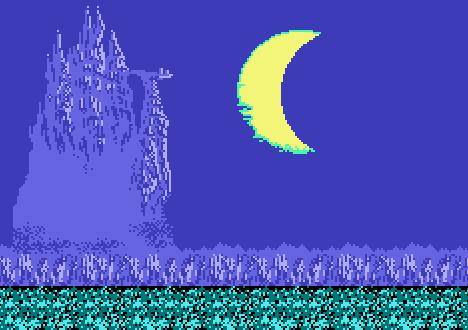 You can watch a compilation of all the incredible (shall I even say amazing?) Ninja Gaiden cutscenes right here:

Go back and read the story description of Ninja Gaiden one more time.

Now, keep in mind that this entire story was presented within the context of the game. Ninja Gaiden is one of the first games in memory that didn’t rely on its story to be told through the packed in instruction manual. No, Ninja Gaiden presented its plot through its gorgeous cutscenes. All of the story listed above could be figured out just by playing the game. This is an incredible feat and what makes Ninja Gaiden so gosh darned groundbreaking.

I will never forget the first time I saw the cutscenes in Ninja Gaiden. I was a young lad of about … well, let’s just say I was a certain age … and I had never seen anything like it!

Up to that point in videogames, I was used to some mild story cutscenes like Toadstool telling me the princess was in another castle, Simon Belmont walking up to the gate in Castlevania, and the island blowing up in Contra, but I had never seen anything like what was presented in Ninja Gaiden.

1988. That is the year the game came out. Twenty years ago. The sophistication and depth of each cutscene in the game is pretty remarkable for, heck, not only two decades ago, but today as well!

The angles, the composition, the lighting — they all come together to form an amazingly cinematic experience never before seen on the NES. Although all the cutscenes are exceptional in their own ways, let’s just focus on the opening one (the most memorable) to really see the creative, cinematic care that went into presenting the game’s story:

The scene opens with a long shot of the two ninjas facing each other in the field. Quick cut to close-ups of their faces, each one artistically pushed to the end of opposite sides of the frame. Cut to similar composition of their legs running towards each other — the awesome sound effects echoing through the speakers. The faces again, this time angrier and shaking to portray motion. Close-up of legs. Jumping. Long shot. Ninjas fly in the air. Their swords clash. The screen freezes and flashes black and white for a split second. Their bodies continue forward. In the foreground, one ninja lands safely while the other collapses to the ground in the distance. The scene fades out as the text of Ryu reading the letter fills in the bottom of the screen. Cut to Ryu …

If I am counting correctly, that is thirteen dynamic shots to visualize the opening event. Thirteen. And each one of those shots makes a point of being expertly composed and edited. There is no wasted, lazy shot. All of the cutscenes in the game truly are visceral works of art. They are gorgeous to look at it and a rush to observe. If that is not a huge triumph in bridging the gap between cinematic techniques and videogames I don’t know what is.

No matter how much time passes I know for a fact that I will never forget the cutscenes in the original Ninja Gaiden. I have such fine memories of the feelings they elicited the first time I experienced them. To me, they will always remain some of the most revolutionary (not to mention memorable) videogame moments of all time.