Acting on instinct – it’s something we all do in our daily lives, but very rarely are allowed to do when playing a videogame. Yes, many videogames offer numerous sequences that require the player to think on their feet and have quick reflexes, but how many times are you required to act wholly on a feeling of instinct?

Instinct is a complicated unlearned biological response that sometimes determines a person’s morality, so maybe that is why it is hard to implement into something as relatively simple as a videogame. I may not be a fighter in real life, so my natural instinct would be to just grab the princess and run. What if I had no interest in battling and defeating the final boss? Unfortunately, videogames don’t offer this kind of complex choice. There has to some kind of predetermined structure or a game would just be chaos, right?

While this is most certainly true, some videogames include moments that go against the grain by letting the player do exactly what they are feeling. One such case of this instinctual choice occurs in Ico for the PlayStation 2.

Let’s look back at one of the most subtle, yet immensely powerful moments in videogame history.

Regardless of the genre, though, Ico is one of the most haunting, wonderful experiences I have ever had playing a videogame and ranks up there as one of my favorite games of all time. 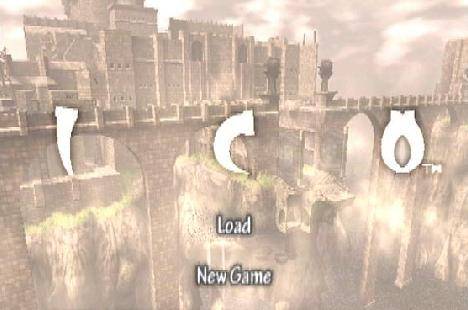 In the gorgeous, ethereal game you play as Ico, a boy who is sent to a faraway castle to be sacrificed, solely because he was born with horns on his head. To the locals, a child born with horns is a bad omen for the future. 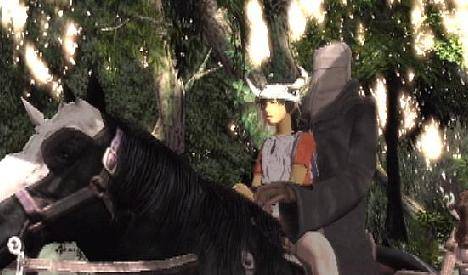 Right as the game starts, a small tremor knocks the sacrificial cell Ico is trapped in to the floor, knocking him free. After standing up and making his way up a long set of stairs, Ico discovers a beautiful young girl by the name of Yorda imprisoned in a hanging cage. 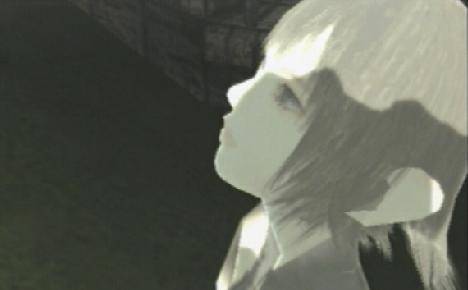 After freeing her, Ico learns that Yorda’s own mother – the queen of the castle – locked her away. In punishment? For protection? Yorda does not know.

Together, Ico and Yorda travel all over the vast castle looking for a way to escape, much to the chagrin of the queen, who insists that her daughter will perish should she reach the outside world.

This seemingly basic premise is what Ico is all about: journeying from one magnificent location to another, solving environmental puzzles and battling shadowy spirits to move forward. The twist to the game, however, is that Ico has to accomplish all of these challenging tasks with Yorda literally in tow. You see, Yorda has the power to open magical gates, so Ico has to hold her hand and lead her everywhere. Since Yorda is not as agile and nimble as Ico, it makes the games numerous puzzles very challenging, as getting Yorda to a specific location can be rather tough. 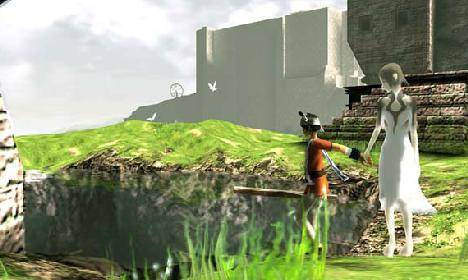 Throughout the adventure, Ico and Yorda conquer many obstacles, bonding closer and closer after every triumph.

This bond grows strongest near the end of the game, when Ico and Yorda are making their way across the castle’s giant drawbridge, hand in hand. 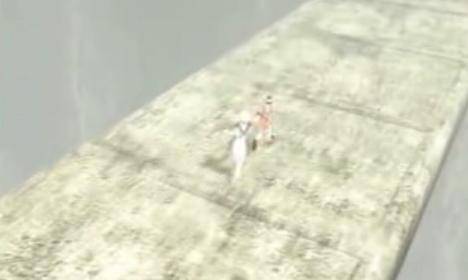 It is during this final run for freedom when the next Memory Card moment occurs: a leap of faith.

As Ico and Yorda make their way across the drawbridge, a giant light from the top of a nearby tower starts to glow. Suddenly, a bright white beam shoots down from the tower, knocking Yorda down and momentarily paralyzing her. 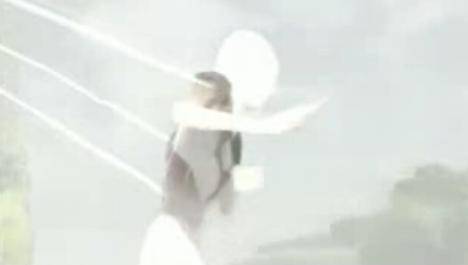 After Yorda collapses, the drawbridge starts to separate. Ico is thrust forward and loses his grip on Yorda’s small, fragile hand, separating the two companions. Yorda stays where she is on the side of the castle and Ico slowly starts to be pulled away on the retracting bridge, inching ever closer to the castle’s exit. 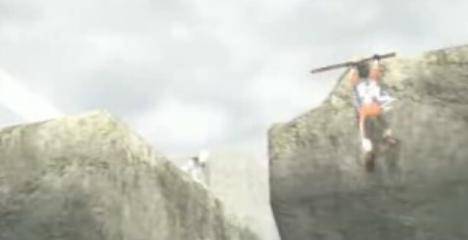 At this point in the game, an important choice has to be quickly made. If the player does nothing, Ico will slowly ride the moving bridge to the exit of the castle, only to find out the giant door leading to freedom has been locked. Eventually, the drawbridge will recede completely into the cliffside, plunging Ico to his death in the deep chasm below.

To avoid the game ending, Ico has to make a leap of faith to Yorda right after the drawbridge separation cutscene ends. Having only a few seconds to act, the player must quickly have Ico jump across the ever-growing gap to be reunited with the girl he has cared for since the beginning of the game. 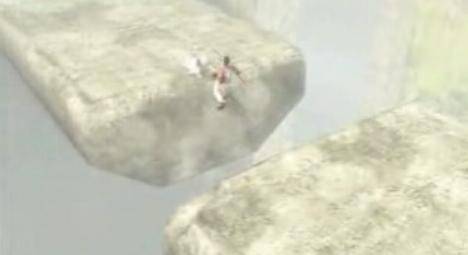 Once he jumps, Ico smacks into the side of the bridge after not leaping quite far enough. Right before falling, Yorda wakes up from her paralysis and grabs Ico’s hand. The roles are reversed! Yorda is now saving Ico. 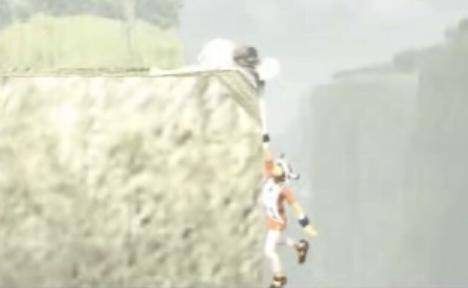 With all her strength, Yorda tries to pull up Ico, but it is to no avail. As she tries and tries to help her new friend, the evil queen of the castle approaches and covers Yorda in an eerie black shadow. 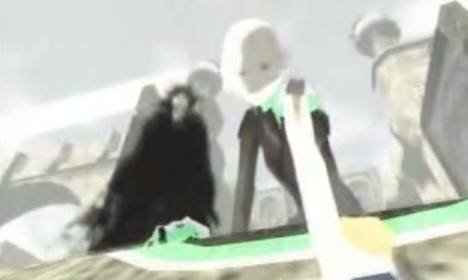 Once the shadow completely overtakes her, Yorda loses her grip on Ico and he plummets into the darkness below. 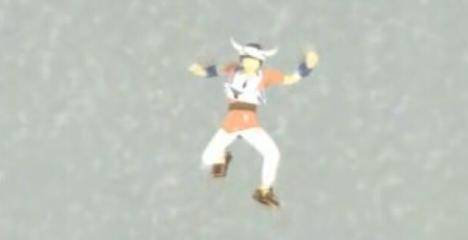 Somehow (maybe because of the power of Yorda’s love? Ico’s bravery?), Ico survives the fall and regains consciousness on top of a hanging steel cage. Without even hesitating, Ico continues his journey back into the castle to save the girl he cares so deeply for.

You can watch Ico’s leap of faith right here:

Ico’s noble act holds a lot of significance, mainly because it is not really the actions of Ico, but the player, that determines what happens.

Once you reach the drawbridge scene, a large chunk of the game has already been experienced. At this point, you, the player, have formed a bond with little Yorda. Sure, dragging her around can be a little bit annoying at times, but her character is so helpless and innocent that you can’t help feeling the urge to protect her at all costs.

When the drawbridge retracts and you start to become separated from her, instinct takes over and you immediately want to jump to save her. But why? Once the cutscene ends and you have full control over Ico, the gap seems way too large to be able to jump over. So why would you even attempt it?

This is the beauty of the sequence. I don’t know about other players, but I immediately jumped across the gap to be reunited with Yorda without even thinking twice. I didn’t care about the size of the gap or the fact that I was basically ruining my chances of escaping from the castle. I cared about was protecting Yorda. I can’t think of any other videogame when my instincts had fully taken over like that. It is like I became the character of Ico (sans the horns). That’s a pretty incredible experience to have while playing a videogame.

On another note, most videogames don’t offer this same sense of urgency. There are definitely timed sequences and the need for quick reflexes, but major game changing decisions can usually be made after thinking about them for a while. This is not the case with Ico’s leap of faith. If you don’t jump right away, it is game over.

But, again, what blows me away is you don’t have to think. At all. If the work of the incredible designers pays off, you will immediately jump over the gap to save Yorda. No questions asked.

I love returning to the world of Ico every now and again to relive the incredible experience the game offers. And the drawbridge sequence gets me every time. It may seem like such a small creative choice in such a huge, sprawling game, but its effect on the overall experience is extremely powerful. It is because if this that I will always remember it as one of my favorite videogame moments of all time.