Day of the Tentacle

If a random person walked up to you on the street and asked you what your favorite type of gameplay was, what would you say? Jumping from platform to platform? Shooting down enemies with a giant rocket launcher? Managing a virtual orc village? If I was asked this question I would definitely answer “solving puzzles.” I love puzzles in videogames — the more fiendish the better.

Lucky for me, puzzle-based gameplay appears in almost every videogame genre, none more so than in adventure games.

Never have I enjoyed an adventure game more than when playing classic LucasArts PC game, Day of the Tentacle. The puzzles in that game are perfectly executed, each one forcing the player to think outside the box and gradually getting more creative (and more hilarious) as the game progresses. In fact, my favorite videogame puzzle of all time occurs about halfway through this adventure gaming masterpiece.

Hit the jump to be blown away by what I think is the greatest single puzzle in videogame history.

Day of the Tentacle is the sequel to classic adventure game . It is not only my favorite adventure game of all time, but one of the best videogames I have ever played. The entire experience is hilarious and endlessly creative. 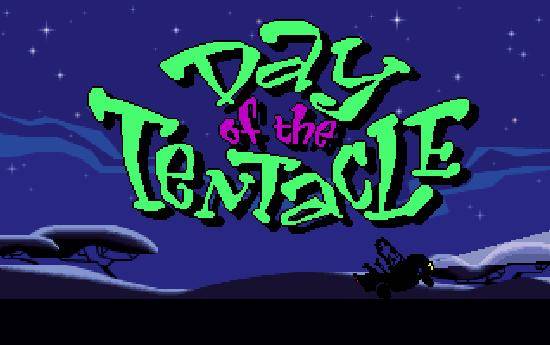 In the game you play as three characters: slacker Hoagie, spacey Laverne, and the only playable character returning from the original — lovable nerd Bernard.

At the beginning of the game, Bernard receives a note from the mansion telling him that his friends Green and Purple Tentacle have been tied up and are being held in the mansion’s basement. Determined to help them, Bernard, Hogie, and Laverne make their way to .

Once there, they free Green and Purple Tentacle, but realize that they were tied up for a reason! The once friendly Purple Tentacle has ingested industrial waste that was spewing from the rear of the mansion, grew two arms out of the side of his slimy body, and is now determined to take over the world! Oh no! 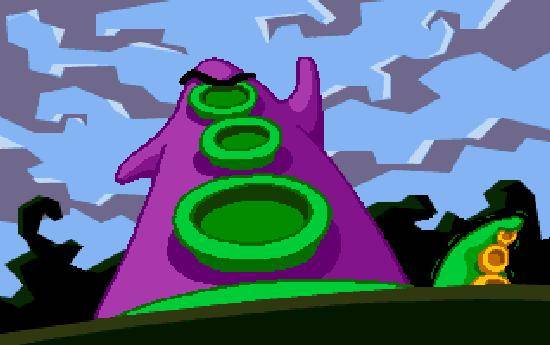 Dr. Fred (one of the mansion’s wacky denizens) informs the three friends that the only way they can stop Purple Tentacle is to go back in time to the day before and stop the industrial waste from being created in the first place. Strangely, Bernard and crew agree and each load themselves into one of Fred’s Port-a-Potty turned time machines. 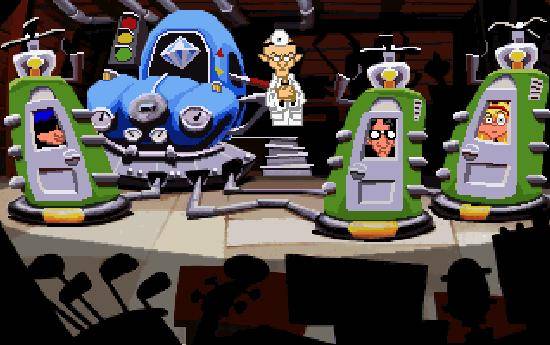 Unfortunately, the diamond powering the odd contraption cracks and the time machines go haywire, sending the three companions to different periods of time. Hogie is transported 200 years in the past, Bernard is spit back out in the present, and Laverne travels 200 years in the future. 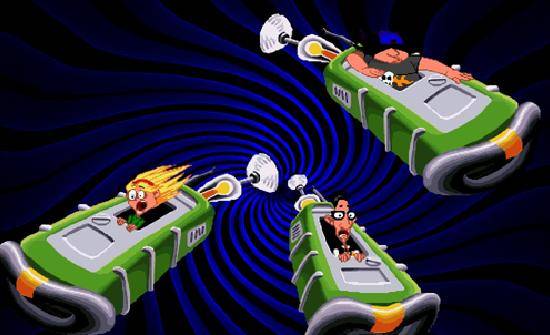 This is when the genius of Day of the Tentacle begins. By switching control between all three characters in three different times, the player must find a way to return Hogie and Laverne back to their respective time machines and help Bernard find a new diamond to bring his friends back to the present.

Each time period almost plays like a separate game, with different characters and items to interact with. What is so amazing about the game, though, is the way changes in the past will affect things in the future. In this regard, it is like all three main characters are working together at all times.

It is this amazing mechanic that spawns what I consider the most satisfying and clever videogame puzzle ever created. The next Memory Card moment occurs when Laverne (stuck in the future) tries to find a way to gain access to a restricted area.

Before covering the specific moment, it is very important to understand the environments all three characters inhabit.

Bernard is obviously in the present, so his world is simply the mansion as it was before the friends entered the time machine. 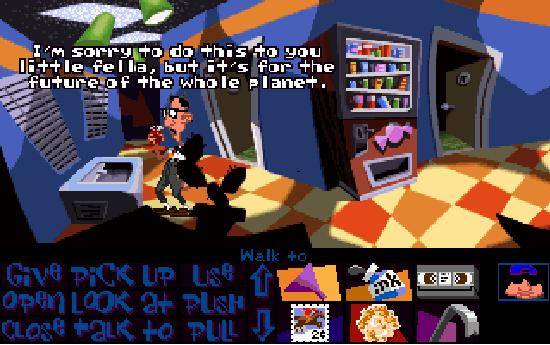 Hogie, though, has been thrust 200 years into the past. During this time, the mansion exists, but obviously looks a lot different (as homes did in the 18th century). More than that, the mansion and its surrounding areas are occupied by famous faces in American history: George Washington, Benjamin Franklin, Betsy Ross, just to name a few. 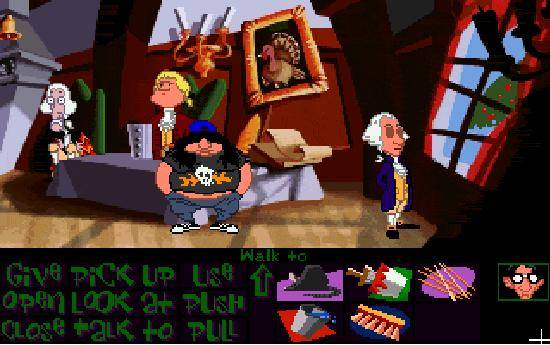 Laverne, on the other hand, is in a future where tentacles have taken over the world. Purple Tentacle is the new leader and has converted the mansion into a “kennel” for humans. Once she enters this scary future, Laverne is immediately captured by the tentacles and locked away.

Sadly, Laverne can’t leave the confines of her cell since she is a human. Only tentacles are allowed to roam the grounds. The only way Laverne can ever wander free from her prison is to tell the guard she needs to go to the bathroom, tell the guard she is not feeling well or … to disguise herself like a tentacle. But how to go about doing this? Hmmm …

After telling the guard she has to go to the bathroom, Laverne is escorted out of her cell and to the toilet. The toilet in the past, present, and future is very important because it serves as a way to exchange items with the other characters. Since the toilet is the time machine (remember, it was a former Port-a-Potty), all the player has to do is drop an item in and any other character can fish it out. This becomes extremely important as the game progresses. 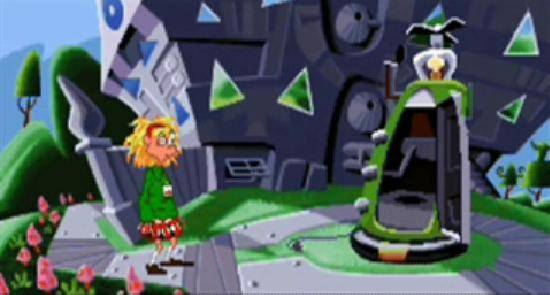 Once Laverne returns to her cell, she immediately tells the guard that she is not feeling well. With this, the tentacle guard grumbles and takes her to see the doctor. While in the doctor’s office, Laverne has access to a fireplace chimney which leads to the roof. On this roof is a flagpole displaying the American flag (more on this later). Instead of doing anything on the roof, though, Laverne grabs a tentacle chart off of the office wall. The tentacle chart looks just like one of those charts in a human doctor’s office that shows the inner workings of the body. 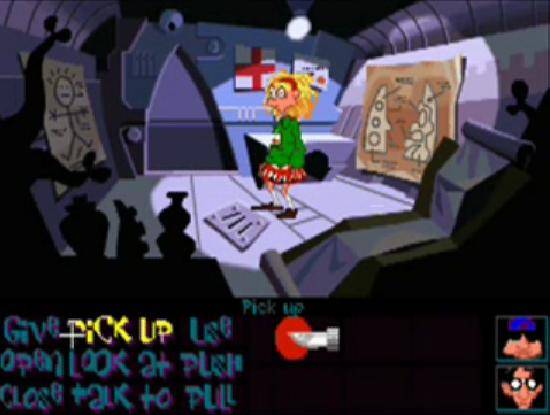 After taking this chart, Laverne then tells the guard again that she needs to go to the bathroom and drops the chart in the toilet.

At this point the player switches to Hogie and retrieves the tentacle plans from the time machine toilet bowl (see, this is why I love this game). He then takes the plans to a room in the mansion where Betsy Ross is sewing the American flag. 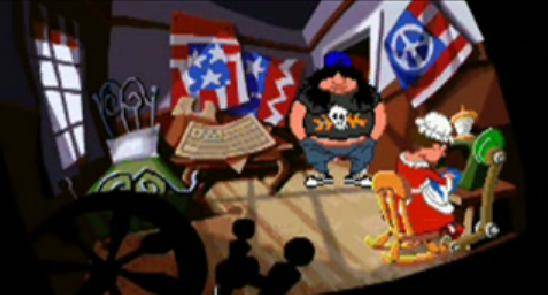 Betsy immediately complains to Hoagie when he enters the room, worried that he is bringing her another plan for the American flag design. She tells him that the founding fathers have not been happy with her original designs and are constantly making her change it. Hoagie then places the doctor’s tentacle chart on the table next to Miss Ross. Betsy looks over and sighs. “I knew it. What’s the current brainstorm from our fickle founding fathers?” she says, disgruntled and tired.

As soon as Betsy Ross starts to sew the flag using the tentacle chart as reference, the game cuts to the future. The traditional American flag that was sitting on top of the human prison (remember that from earlier?) all of a sudden disappears and is magically replaced by a new flag — still red, white, and blue — in the shape of a tentacle! 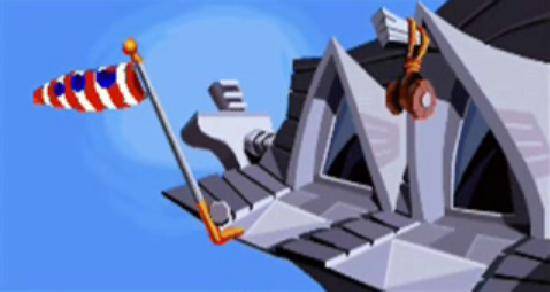 After this happens, players can switch back to Laverne in the future.

Telling the guard she is not feeling well once again, Laverne ends up in the empty doctor’s office and quickly makes her way to the roof. To her amazement, the American flag has been replaced by the perfect … tentacle costume!

Laverne cranks the flag down the pole, grabs it, and slips it over her skinny body. Perfect fit! 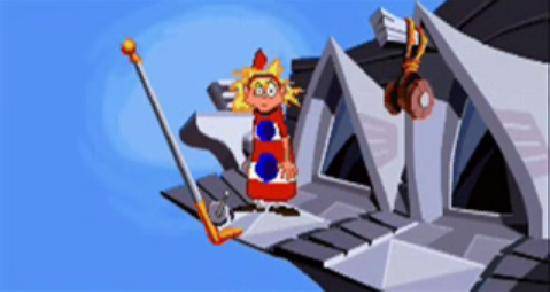 From this point on, Laverne can travel, undetected, anywhere she wants all over the mansion. of the tentacles don’t even look twice at her since they think she is one of them! Amazing. Best puzzle ever!

You can watch the complicated (but oh-so-satisfying) puzzle unfold right here (it starts on the first video around 5:23):

Day of the Tentacle is full of a ton of these clever puzzles. I could have easily replaced this moment with any other in the game and still showered it with the same adoration. The entire game is really that good.

There are a few specific reasons that this puzzle stands out a tiny bit more than the rest, though:

First of all, I love how the puzzle is based on real knowledge of American history. Betsy Ross is the actual person who sewed the original American flag, so to use her to help you accomplish your goal is pretty remarkable. It uses the player’s intelligence outside the game’s universe, which adds a new layer to the already ingenious puzzle.

I also love how all the objects you utilize to solve the puzzle don’t really have anything to do with what they are generally used for. For example, the tentacle chart in the doctor’s office. In a less amazing adventure game, you would probably use this chart for what it actual is — maybe you would study it to find out more about the inner workings of a tentacle. But in Day of the Tentacle, you give it to Betsy Ross as the new design plans for the American flag. Genius!

Even the actual flag itself is used in a strange new way. Laverne needs to look like a tentacle, right? Well, instead of her finding a tentacle suit, she actually wears the freakin’ American flag … that happens to resemble a tentacle because of the events that changed in the past! Again, genius!

The concept of time travel is a tough thing to portray in videogames, but Day of the Tentacle gets it right. Every action in the past relates in incredible ways to something in the future. And it seems that these actions get more and more creative as the game progresses.

I have experienced some pretty spectacular puzzles in all my years of playing videogames, but this puzzle in Day of the Tentacle is my favorite of all time. Some other puzzles within the same game come pretty close to taking the prize (the vacuum cleaner and chattering teeth puzzles come to mind), but the American flag/tentacle disguise will always hold a special place in my heart.

Day of the Tentacle is one of the few games I have ever played that feels absolutely perfect to me in every way. Classic adventure games … I miss you so.