Lucky for us, there have been numerous boss fights over the years that are highly memorable, some even elevating themselves from merely “satisfying” to downright revolutionary. I know, the term “revolutionary” is thrown around way too much and is turning into the buzz word of the industry, but how else to describe a sequence in a game incomparable to anything that has ever come before it?

A perfect example of one of these truly revolutionary boss battles occurs in one of my favorite games of the last decade, Metal Gear Solid 3: Snake Eater for the PlayStation 2.

Let’s experience a videogame showdown unlike any I have ever played before.

I am a huge fan of the Metal Gear games, with Metal Gear Solid 3: Snake Eater being my absolute favorite in the series. Yes, the game has its detractors, but, to me, everything feels perfect (that’s right; I said “perfect”), from the opening parachute drop into the jungle to the emotional and heartbreaking finale.

One of my favorite things about the game is its inclusion of some very memorable characters, none more memorable than the members of the Cobra Unit.

What is this “Cobra Unit,” you ask? Well, a little backstory on the plot of the game will help answer that question (you can get a more detailed version of how the game unfolds here, the first time Metal Gear Solid 3 was featured on The Memory Card).

In the game you play as Naked Snake, an operative for the government sent to the jungles of the during the Cold War to thwart the evil plans of his former mentor, The Boss. The Boss is in the possession of a nuclear weapon and Snake must find a way to stop her before destruction is unleashed upon the world.

The Cobra Unit is a group of highly trained soldiers who pose as boss battles within the structure of the game. They serve under The Boss and all have names linked to emotions (i.e. The Fear, The Fury, etc.).

The only member of the Cobra Unit that does not possess the same naming convention as the others is The End. 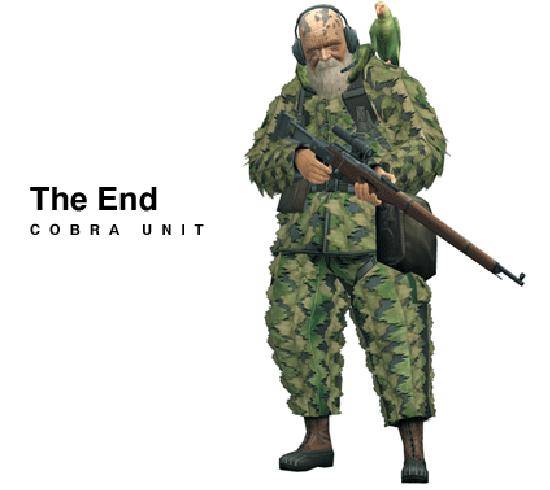 The End is a very old man. Factoring in the information gathered during the game, he may even be more than 100 years old. And he acts it, riding around in a wheelchair for the majority of the game and falling asleep during numerous cutscenes. But what The End lacks in youth, he makes up for in unparalleled skill. You see, The End is a master sniper, even putting former Metal Gear Solid boss Sniper Wolf to shame.

Throughout the game, Snake defeats members of the Cobra Unit one by one. Eventually, he makes his way to a section of the jungle that seems … creepier than usual (dubbed Sokrovenno South). 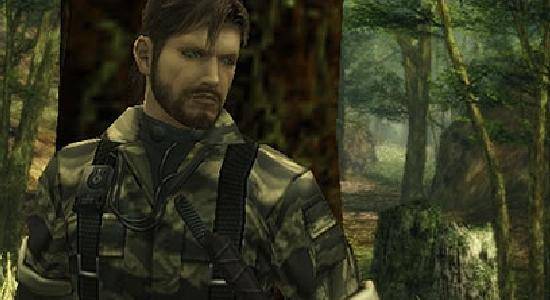 The next Memory Card moment begins as Snake enters this lush section of Sokrovenno, triggering one of the most amazing boss battles in the history of videogames.

As Snake slowly makes his way through the swaying trees of the jungle, liver spot-covered The End is revealed to the player just yards away, asleep with his sniper rifle cuddled up with him like a teddy bear. 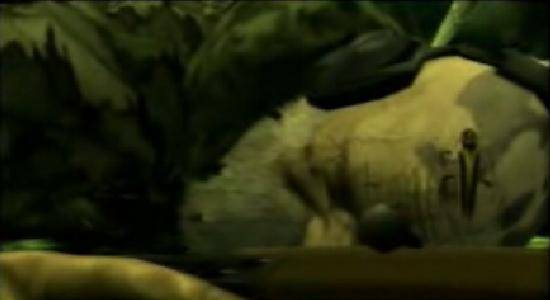 Suddenly, The End’s parrot companion flies down and warns him of Snake’s appearance. The End awakes and jumps into firing position immediately, his bulging eye pressed against the rifle’s sight. 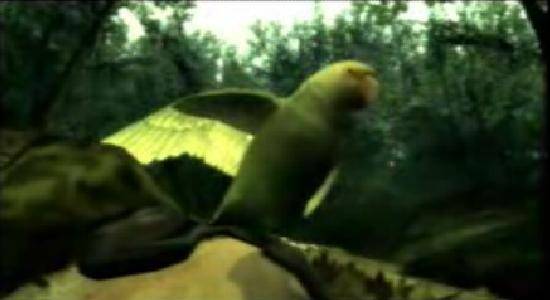 The End then starts to pray to some celestial being to give him the strength to complete this one final battle before he dies. “Let me linger in this world just a little longer,” he pleads as he readies his gun. 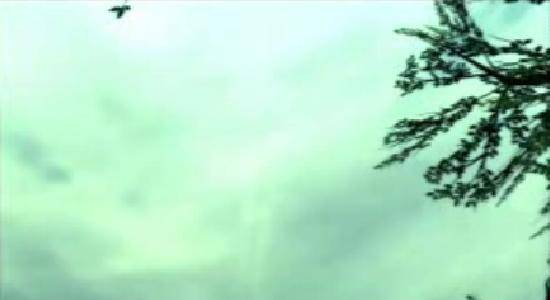 After a completely camouflaged The End screams out a dramatic introduction, Snake pulls out his own trusty sniper rifle and the epic battle begins. 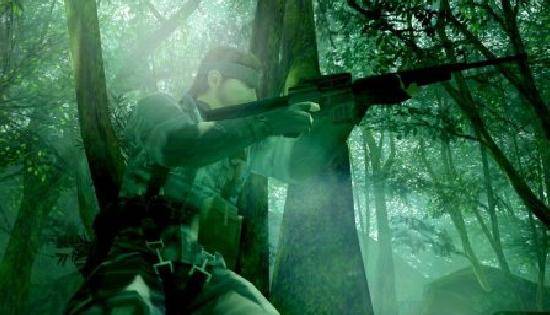 Most boss battles in games take place in a small, controlled area, allowing the actual battle to be the focus of all the action on-screen. The battle with The End, however, takes place over three huge jungle maps.

When the battle starts, Snake has many options available to him. He could, technically, run around all three maps, hoping to get lucky and just randomly run into The End. Chances are, however, this technique will result in Snake immediately being shot down by The End’s accurate (and lethal) sniper fire.

Instead of using brawn, Snake is forced to use his brains … and a whole lot of patience.

There are many techniques Snake can use to defeat The End. He can use his thermal goggles to find The End’s location and scope him out that way. He can use his directional microphone to hear the sound of rustling jungle, signaling him to the direction of The End’s whereabouts. Snake (and the player) can even watch for The End’s parrot to fly in the air, giving its master’s location away. 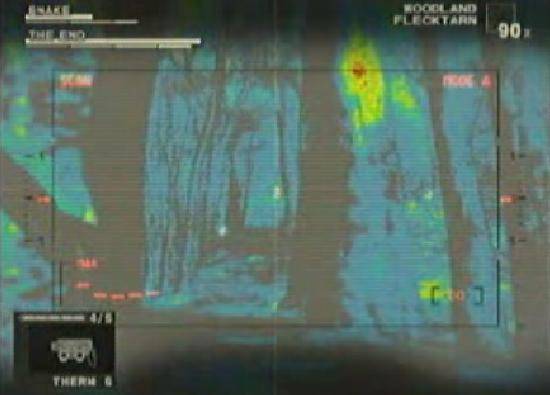 Regardless of the technique, the battle takes a very long time. Not only are all three jungle maps large in scope and area, The End doesn’t constantly move around and reveal obvious patterns like most bosses. In fact, the AI is so advanced in Metal Gear Solid 3 that The End will usually find a nice, safe, hidden spot and plant himself there for hours, just waiting to get a good shot in.

Even when you eventually locate The End, he doesn’t just sit there and let you shoot him. Once he sees the red beam from Snake’s sniper sight he will run away, looking for a new location to perch for another few hours. Yikes!

While all of this sounds frustrating, it really isn’t. The whole, protracted experience feels like an honest-to-God duel between two talented marksmen. Having no other enemies to worry about other than The End may make the jungle feel empty at times, but it only adds to the tension. Personally, I just love knowing that The End is out there somewhere, just waiting amidst the foliage, ready to strike. It forces the player to think outside the traditional boss battle mold to figure out a way to achieve victory. 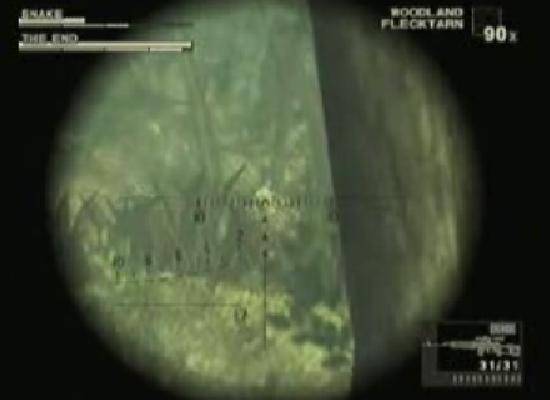 Another cool touch during this battle is that The End is the only enemy in all of Metal Gear Solid 3 that will actually not kill Snake. The old sniper has too much respect for his challenger that, instead, he will just lower Snake’s energy to barely nothing, rendering him unconscious. If this happens, the screen goes black and Snake wakes up in a prison, forced to figure out a way to escape and make his way back to The End to start the fight all over again. This creative choice is a nice touch to an already stunning sequence.

Once Snake finally defeats The End, the boss dies in typical overdramatic Metal Gear fashion. His body explodes and the remains gently blow into the trees, becoming one with the surrounding jungle.

Snake pays his respect to his fallen enemy and then continues on his journey.

You can watch the opening and closing to the amazing battle right here (keep in mind that the actual fight most likely couldn’t be captured on video, mainly because it lasts so long):

Wow. There are so many ways the battle with The End revolutionizes how things are handled in a videogame. I honestly don’t know where to start. *rolls up sleeves*

The heavy focus on strategy over action is what obviously makes this battle significant from the start. It took me almost two hours to kill The End the first time I fought him, but I have heard stories about people taking more than six hours to finally do him in. A boss battle that lasts for six hours? Incredible doesn’t even begin to describe that. Heck, just the fact that the battle is even designed to be able to last for up to six hours (if not more) is impressive. Can you think of any other boss battle in history that could even come close to taking this long?

This lengthy, meticulous showdown is one thing, but the more you play Metal Gear Solid 3, the more you discover how much creativity the battle with The End has to offer.

When you first enter the battle you are met with The End’s parrot flying about, warning him of Snake’s presence. To start things off differently, you can actually kill this parrot with a well-aimed bullet. Not only will this result in some heavy curse words, but The End’s attack patterns will actually change. Instead of relying on patience, The End will be so angry and riled up from the death of his pet that his offensive strategy will be more aggressive.

There are also a few cool, alternative techniques the player can use to finish off The End. Of course partaking in the epic cat-and-mouse sniper battle is the most interesting and satisfying, but how about waiting for The End to fall asleep? That’s right; if you fight against The End long enough (around a few hours) he will actually fall asleep in the middle of battle. At this point all Snake has to do is walk up to him (if he can find him) and fire away. It’s tough to take advantage of the small window of time he is asleep, but it is a cool technique nonetheless.

And you can even skip the battle as well! In one particular sequence early in the game, the player has full control over Snake as he is watching The End being wheeled around in his wheelchair. If Snake possesses the sniper rifle at this point in the game, he can zoom in and shoot The End in the head, killing him instantly. If the player accomplishes this, the boss battle will never happen. The fact that creator Hideo Kojima incorporated this technique into the game is a work of pure genius. And it makes perfect sense! If a boss appears earlier in a game, why should you have to wait until a preordained time to kill him/her? Why not take advantage of the opportunity before they are prepared for battle?

But the ultimate technique to beat The End has to come in the form of waiting for him to die. As mentioned several times before, The End is very old and on the brink of death. If the player saves the game in the middle of the fight, goes into the PlayStation 2’s internal clock and sets it forward a few weeks, the next time the game is loaded up The End will have died … of old age. Seriously, a new cutscene will depict Snake finding him just lying there dead. No fighting necessary. Awesome.

I am sure there are numerous more secrets during the battle with The End that can be discovered after playing the game over and over. That is the beauty and magic of the Metal Gear games. As with Psycho Mantis in Metal Gear Solid, Hideo Kojima really knows how to shatter the “fourth wall” and revolutionize what can be accomplished in a videogame.

The End is one of my favorite characters of all time and his boss battle is something I will never forget for the rest of my life. A truly incredible experience.