People say the hardest thing you will ever go through in life is losing a family member. As someone who has experienced this, I can tell you that it is most definitely true. The pain and emotion of losing someone you love — especially a member of your family — is devastating and incomparable.

So what happens when something like a videogame tackles a heavy subject such as this? Most critics (read: non-videogame fans) would argue that something as “simple” as a videogame could never attempt to recreate the raw emotion that is felt when someone in your family passes away.

While never coming close to duplicating the feelings experienced in real life, Final Fantasy VI for the Super Nintendo Entertainment System handles many moments of tragedy with a respect and beauty rarely seen in the world of videogames.

Let’s relive one of these moments that reaffirms the power of family … and reminds us all of the heartbreak of loss.

This is the third time that Final Fantasy VI has been featured on The Memory Card and, honestly, it most likely will not be the last. The game is a true classic and part of a dramatic three-way tie for first as my favorite videogame of all time. For anyone that wants to get more backstory on this epic game, you can click here and here. In this instance, I am just going to focus on the events leading up to this week’s entry. 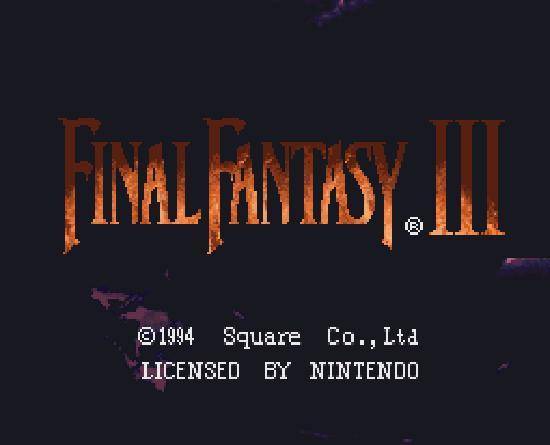 Final Fantasy VI is full of numerous playable characters, each more memorable than the last. I will even go so far as to say the game contains the best characters in the history of videogames.

One of the more memorable and complex characters in the bunch is Cyan Garamonde.

Cyan is the retainer to the king of Doma. The first time your party meets him, he is defending Doma from a heavy onslaught of troops sent by the ruthless and evil Kefka. Since Cyan is one of the strongest and most celebrated soldiers, he easily (and almost single-handedly) holds off all the attackers.

After Cyan’s victory, Kefka decides to play dirty. Instead of following the normal rules of war, Kefka sneaks to the edge of a local river and pours a large amount of poison into the water. Since the river is used as Doma’s only water supply, Kefka hopes that the poison will destroy the kingdom from the inside out. 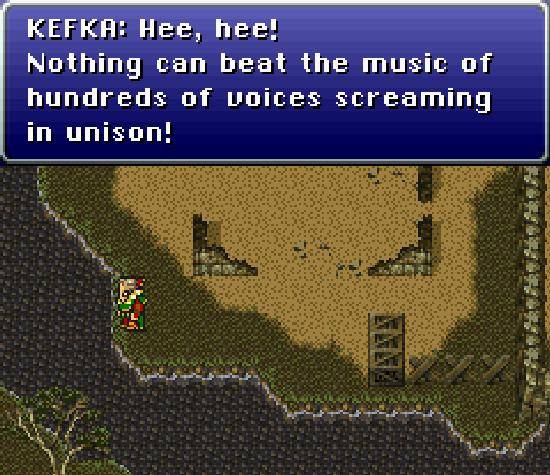 Sadly, Kefka’s plan works perfectly as the citizens of Doma start to collapse one by one.

Before Cyan even has a chance to celebrate his victory over Kefka’s forces, a loyal associate brings him word of the horrible event that is occurring. Cyan looks over the balcony of his room and sees it all with his own eyes.

Immediately, Cyan rushes back into the castle and runs downstairs, shouting two names as he runs: Elayne and Owain. It is at this point when the player realizes that (gasp!) Cyan has a family! A wife and a son! And he is determined to see if they are okay!

As Cyan enters his wife and child’s bedroom, he witnesses a horrible sight. Lying on a nearby chair and bed are Elayne and Owain, both victims of the mass poisoning. To make matters more heartbreaking, as Cyan approaches, his son’s lifeless body falls off of the bed and into his arms. 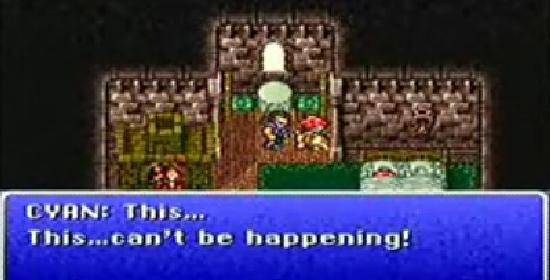 More angry and full of rage than he has ever been in his whole life, Cyan rushes back onto the battlefield on a suicide mission fueled by vengeance.

With the assistance of conveniently close party members Sabin and Shadow, Cyan defeats a large amount of troops and avoids certain demise. Grateful for saving his life, but still saddened by his family’s death, Cyan joins Sabin and Shadow in the hopes of seeking further revenge on the dastardly Kefka.

As the newly formed party journeys away from Doma, they reach a dark forest containing a mysterious train station. 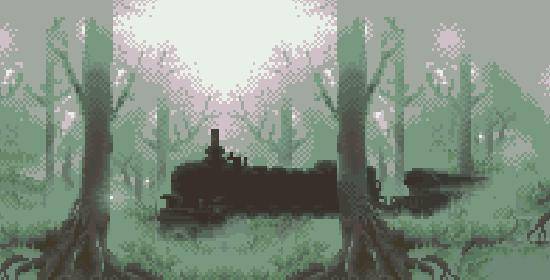 Having nowhere else to go (and being ever so curious about its contents), the three party members board the old train.

It is on this train when the next Memory Card moment occurs.

As Cyan and party explore the train, they discover that all its passengers are spirits. Suddenly, Cyan realizes where they are. He tells his new friends that they have boarded the Phantom Train, a vehicle used to transport the dead to the afterlife.

Before they have a chance to exit the creepy train, however, it begins to move, locking everyone inside. Creeped out and not wanting to die, the party makes its way to the engine room of the train, determined to find a way to stop it. 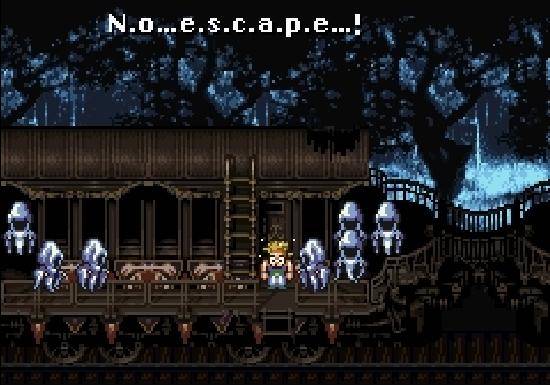 After an epic boss battle with the angry and demonic engine, the party is victorious and the train comes to a screeching halt at a nearby station. 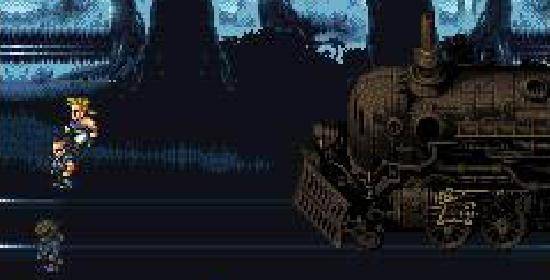 As Cyan and party exit the train, they hear the sound of something (or someone) approaching. To their surprise, they see a large group of people actually boarding the Phantom Train. The party realizes that these people are actually spirits getting ready to take their finally journey to the other side.

of a sudden, Cyan notices something shocking. His wife and child — murdered earlier as a result of the poisoning — are actually two of the people boarding the train! 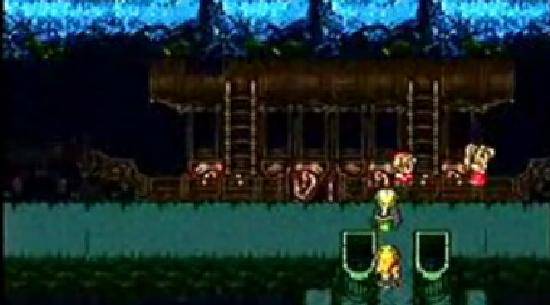 Without even thinking, Cyan leaps forward and runs to the side of the train just as the door closes and the haunting vehicle begins to rumble forward. He screams at the top of his lungs for the train to wait, but it is to no avail — it clanks forward and continues on its journey.

Cyan runs behind the train, screaming, crying, and pleading for it to stop. 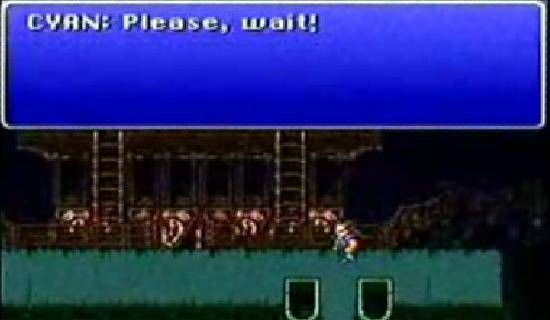 Seconds before it leaves the station, Elayne and Owain emerge from the back of the car. Cyan comes to a stop at the edge of the platform just in time to see his wife and child staring back and him.

As the train disappears into the mist-covered forest, Elayne and Owain’s final words to Cyan echo in the darkness:

With this, Cyan stands in silence. that can be heard is the sound of the Phantom Train’s whistle blowing as the scene slowly fades to black.

You can watch the devastating scene unfold right here (the final good-bye occurs at around 3:50):

I am not going to lie; I am holding a huge wad of tear-soaked tissues as I type this. Cyan chasing after his departing family gets me every single time (even when just writing about it, for crying out loud). Videogame moments don’t get any more tragic or heart wrenching than this.

There are a couple main reasons this scene works so incredibly well.

First and foremost, establishing Cyan and his relationship with his family before the Phantom Train scene adds to the drama exponentially. The designers could have easily just shown Cyan’s family for the first time as they boarded the train (they could have died before the game’s events from something the player just learns about through exposition).

By witnessing the horrible murder of Cyan’s family the player is already left disturbed and sad for Cyan’s character. They relate to him. So when Cyan boards the train and sees his own wife and son, the player’s emotions are tied to him every step of the way. In fact, the first time you see Elayne and Owain walking towards the train, there is no question of who they are. The visual cue alone triggers a reaction in the same way it does for Cyan.

Even more than this genius unfolding of events, I think the actual aesthetics of the sequence are what make it so emotionally powerful.

Take the music and sound effects, for example. Or, should I say, the lack thereof. How many games have you played when a dramatic scene is completely saturated with crescendos of overdramatic music? True, this may work in some cases, but most of the time this almost forced music distracts from the emotions being portrayed on-screen. It’s like the designers don’t trust the action.

As soon as Cyan runs for his family there is absolutely no music. None. At all. And this lasts all the way until the scene fades out. that can be heard in the entire sequence is the rattling of the train as it starts down the track and the final whistle of the engine as it leaves the screen. Watch it again if you have to. This minimalist design choice is pretty stunning.

Like I mentioned earlier, Final Fantasy VI is one of my favorite games of all time, and the scene on the Phantom Train is the perfect example of why. This 16-bit videogame contains more emotions, memorable sequences, and classic characters than almost any piece of art I have ever had the pleasure of viewing my entire life. That really shows you the power of something as seemingly “simple” as a videogame.