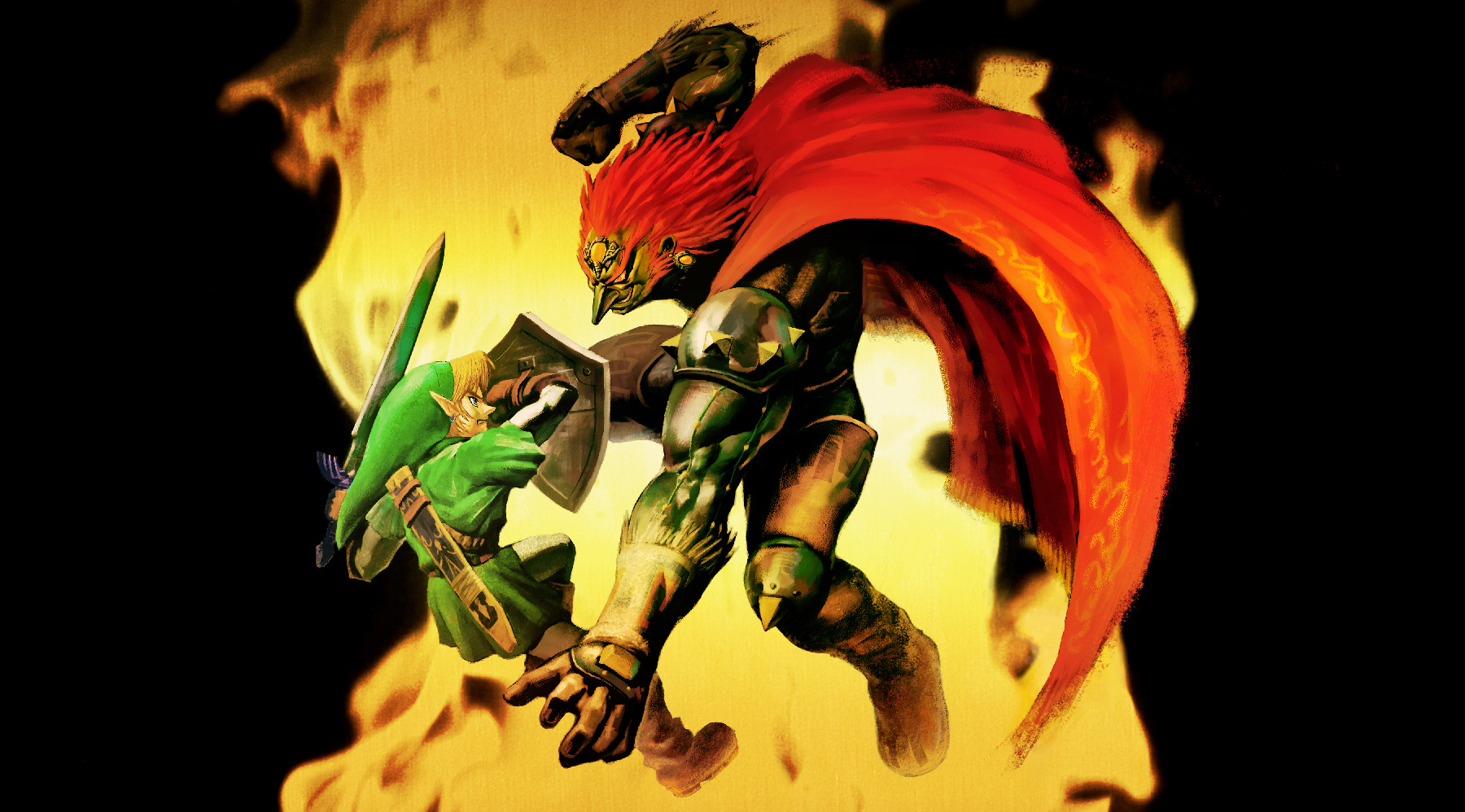 Final boss battles are significant for many reasons, mainly because game players desperately want to see their character’s long journey come to a satisfying end. Sometimes these battles are so important, that I would go so far as to say they can even make or break a game. A beautiful, fulfilling adventure can come to a screeching halt with a rushed, poorly designed final confrontation.

Once and a while, though, a final boss battle comes along that is not only epic, but truly feels like the perfect amalgamation of everything the game has been building to. Everything your character has experienced, all the skills he/she has learned — they all come into play for one stupendous final showdown.

While there are many amazing final boss battles over the years, a small handful in particular stand out to me as being the best of the best. They all feel like perfect endings to already near perfect games.

Maybe my favorite final boss battle of all time occurs at the end of the Nintendo 64 masterpiece, The Legend of Zelda: Ocarina of Time. Let’s relive one of the greatest hero vs. villain encounters in videogame history.

It goes without saying that The Legend of Zelda: Ocarina of Time is one of the greatest videogames of all time. If you have never played it (which I doubt is possible if you are frequenting this Web site), stop reading right now, find a copy of the game and play to your heart’s content. You can thank me for changing your life later. 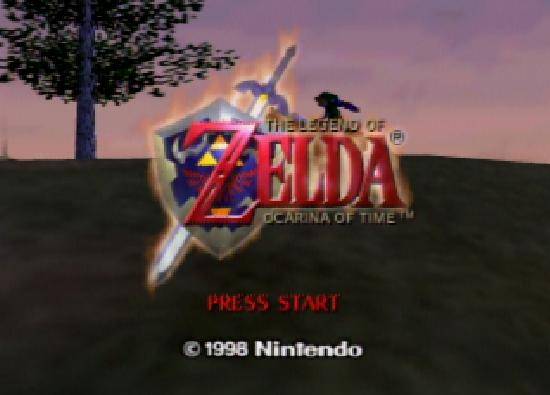 In the game, you play as Link (the green outfit-wearing star of all the Zelda games), a young and innocent member of the Kokiri tribe. Upon hearing that the Great Deku Tree is sick, Link goes to visit it and discovers that an evil man known as Ganondorf had cursed the wise tree and seeks to take over the . 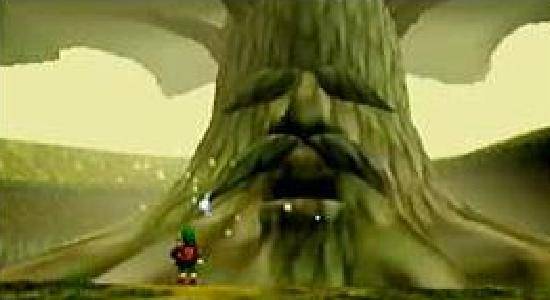 Listening to the Great Deku Tree’s dying advice, Link travels to to speak with Princess Zelda and learn more about the evil Ganondorf and the fate of the land. 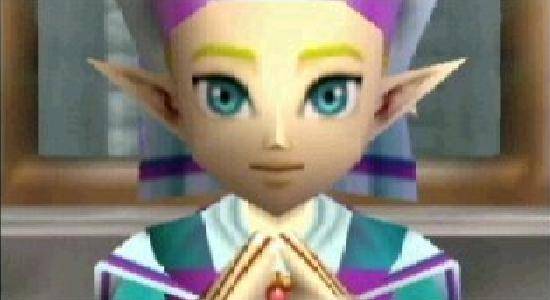 In the castle courtyard, Princess Zelda tells Link about the mystical Triforce, a holy relic located in the Sacred Realm that gives its owner infinite power. Zelda fears that the thief Ganondorf is planning on finding this Triforce and destroying the world. The only way to stop this from happening, she feels, is if Link travels to the Sacred Realm and claims the Triforce for himself, beating Ganondorf to his prize.

To do this, Link obtains three sacred stones which, combined with the music of the Ocarina of Time, reveal The Master Sword, a powerful weapon that allows Link to travel to the future (seven years, to be exact) and into the Sacred Realm. 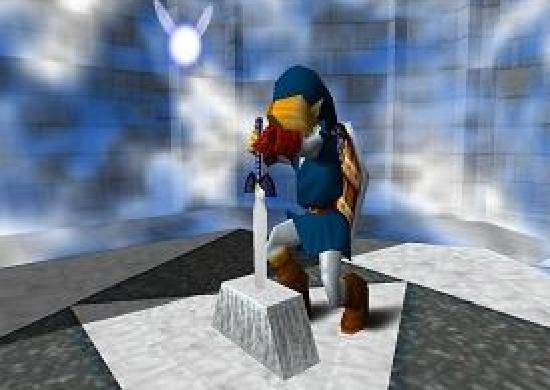 Unfortunately, as soon as Link enters the Sacred Realm, he realizes it has already been taken over my Ganondorf, and that he and Zelda were merely used as pawns in his master plan. 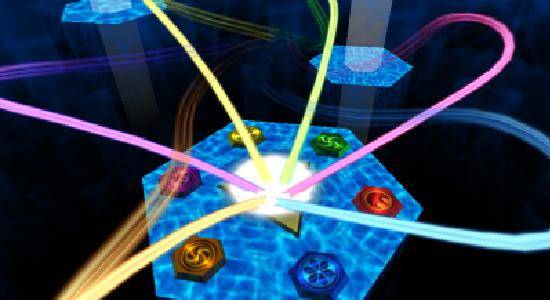 After an epic and truly glorious adventure to awaken seven sages (the key to trapping Ganondorf in the Sacred Realm), Zelda gives Link the magical Light Arrows, the only weapon powerful enough to destroy Ganondorf.

As soon as the arrows change hands, Zelda is captured and sealed in a crystal by the evil thief, who immediately whisks her away to his enormous lair (formerly ).

Determined to save his beloved princess, Link uses the power of the seven sages to form a bridge and break the barrier surrounding Ganondorf’s tower. 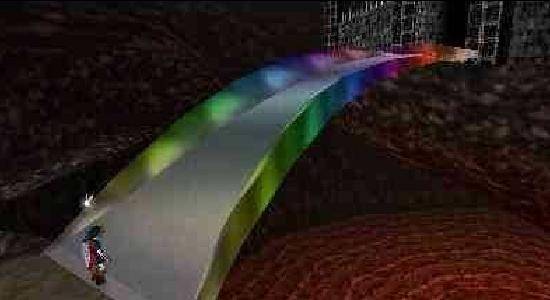 A long and challenging dungeon crawl later, Link finally makes it to the highest room in the structure, ready to confront his ultimate nemesis and rescue Princess Zelda. This is when the next Memory Card moment occurs, at the top of Ganondorf’s tower.

Link walks into Ganondorf’s throne room to the sound of a pipe organ being played. As he looks around the room, he immediately notices that Zelda is still encapsulated in her crystal, floating high above the center of the room. 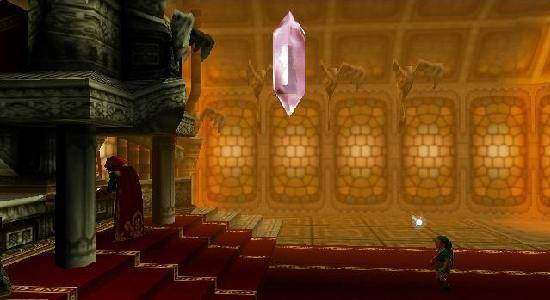 Before Link even has a chance to react, the pipe organ music stops and its player, Ganondorf himself, turns around and stands before Link.

After the requisite enemy monologue, Ganondorf and Link engage in battle. 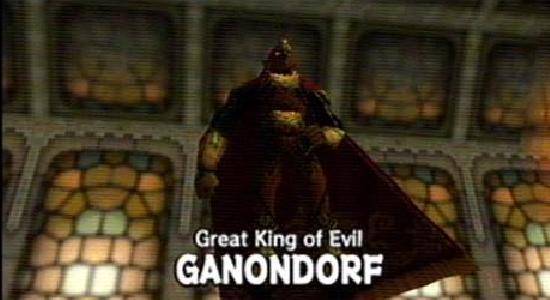 As Ganondorf floats around the room, focusing his evil glance on heroic Link, he shoots glowing white balls of energy at Link. Cleverly, Link bounces this energy back at its originator using the power of the Master Sword.

Once a direct hit is achieved, Ganon becomes stunned, unable to do anything for a short period of time. During this small window of opportunity, Link pulls out Zelda’s Light Arrows and fires away.

As one of the arrows hits Ganondorf, he crumbles to the ground, allowing Link ample time to then hack away at him with his sword.

Of course all of this is not as easy as it sounds, as Ganondorf’s attacks become faster and Link has a much harder time connecting with his various weapons.

Eventually (after repeating the effective process numerous times), Ganondorf is defeated, spitting up red blood (or a mysterious green substance in later versions of the game) and collapsing on the floor.

As soon as Ganondorf is slain, the walls and ceiling around Link disappear, leaving him standing with nothing but the dark cloud-covered sky above. From out of nowhere, Zelda is released from her crystallized prison and joins Link by his side. 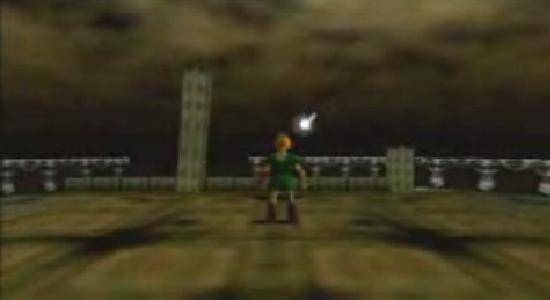 This is when the game takes an interesting turn and offers the player something not experienced in previous Zelda games: Instead of watching the ending of the game, suddenly, the tower around Link and Zelda starts to collapse. The player is then given surprise control over Link as he races down the side of the structure with Zelda in tow.

As a timer counts down the seconds needed to reach the goal, Link and Zelda fight through numerous rooms in the tower before finally arriving safely outside the collapsing building. 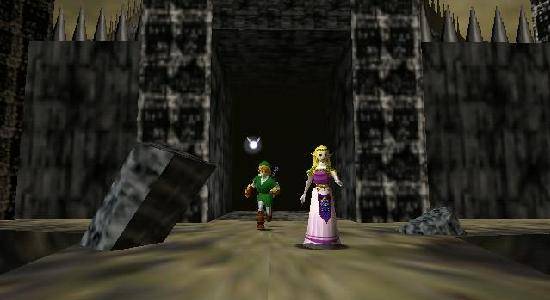 At this point in the game, Link and Zelda are safe, Ganondorf’s tower has been destroyed, and peace seems to be restored (Zelda even says “It’s over … it’s finally over … ”).

But, yet again, the game throws in another twist as the rubble of the fallen tower starts to shake. From out of the piles of wood and stone, Ganondorf emerges (still alive and more demonic than ever), immediately trapping him and Link in a ring of fire.

Using the last of his Triforce power, Ganondorf then morphs into one of the most badass characters in the history of videogames, the demon Ganon. 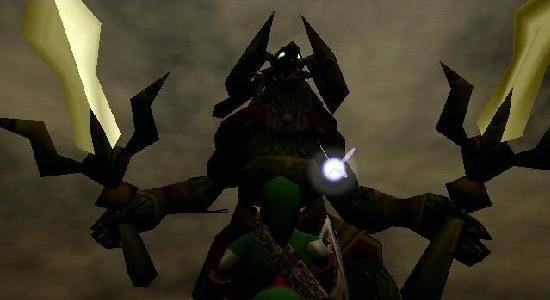 Before Link even has a chance to react, Ganon knocks the Master Sword from his grasp, the weapon sticking in the ground outside the magical ring of fire (and precariously close to Princess Zelda). 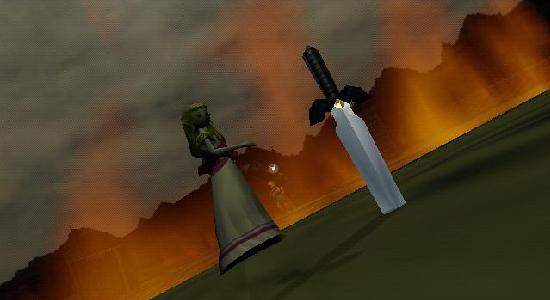 With only the tools he has available (the most useful being the Light Arrows and Megaton Hammer), Link manages to attack Ganon’s defenseless tail, causing the towering demon to fall to his knees.

As Ganon falls, so does his protective barrier. Link uses this opportunity to grab his Master Sword just as Ganon rises again to fight. Repeating the same technique as before (attacking the tail), this time Ganon collapses much quicker because of the awesome power of Link’s reacquired weapon.

Right when Ganon hits the ground for a second time, Zelda decides to (finally!) step in and assist. She harnesses the power of her Triforce, emitting a beam of light and stunning Ganon.

With one final, surprisingly violent blow (to the face!), Ganon is defeated by Link’s Master Sword, ending one of the most epic final boss battles ever experienced. Whew!

You can watch the amaaaaazing battle here (unfortunately, the player decides to edit out Link and Zelda’s dramatic escape from the tower — the best part!):

Multiple tiered final boss battles are a staple of many epic games, but never before had one been used so effectively as in The Legend of Zelda: Ocarina of Time.

Take the Final Fantasy games, for example: almost every one of their final bosses have numerous tiers. Once you defeat one form, the boss will literally rise up, exposing a tougher and more elaborate version of itself underneath. While this is very cool (I would never dis a Final Fantasy game), there really isn’t too much logical reasoning behind the creative choice. Why didn’t the boss just fight the party with its most powerful form from the start? It doesn’t make a lot of sense (even in the context of a fictional world).

What makes the final boss battle with Ganondorf/Ganon so great, is each tier of the boss feels organic and flows perfectly with the story presented on the screen.

I will never forget the first time I got to Ganondorf when playing Ocarina. The final dungeon — having to complete mini levels featuring all the sages — was awesome, but walking into Ganondorf’s throne room to the sound of him playing a massive pipe organ was just breathtaking.

In all the past Zelda games, only one form of the final boss was encountered. You got to Ganon, you shot him with a few Light Arrows, and he was dead. Commence ending!

After I defeated Ganondorf I truly thought the game was complete. Not just because that was the normal mind set to be in while playing a Zelda game, but because Ganondorf was actually tough. Reflecting back Ganondorf’s energy balls was hard enough, but having to quickly switch to Light Arrows, and then back to your sword, all the while leaping over a gap in the floor, was a true challenge.

Adding on not just another, tougher boss battle (Ganon!), but an extended sequence where you have to escape the crumbling tower you just conquered was pretty revolutionary for the time. Imagine defeating the final alien heart in Contra, only to have to maneuver a tough (player-controlled) escape in your helicopter and then battling an even bigger and badder version of the enemy you thought was just destroyed. I genuinely was surprised (and impressed) by the length and quality of the final boss battle with Ganon. It truly was the perfect way to end the game.

Every since The Legend of Zelda: Ocarina of Time, there has been a handful of final boss battles that almost managed to up the ante in terms of sheer scope and design. I say “almost” because Zelda was the first final boss battle to really blow me away, and for that I will always cherish it as one of the best and most memorable videogame moments of all time.