Today brings some unfortunate news. No, my puppy is fine. Nope, I still love dolphins just as much as always. I’m sad to say, this will be the last Memory Card for a while. But, not to worry, it will most definitely return. I just figured a small break was needed to reorganize and gather some more amazing gaming memories that we can all hold hands and talk about in front of the fireplace together. In all honestly, though, I hope you enjoyed reading them as much as I loved writing them.

So for dramatic purposes, let’s just call this the season finale.

And like any great “season finale,” this Memory Card will be full of something unexpected, something sappy, and something akin to a disappointing cliff-hanger.

On the unexpected side of things, this farewell-for-now edition will bypass the classic games of the past and focus on something extremely recent: BioShock.

It comes as no surprise that I love the game and relish in the fact that it is filled with so many classic moments that I know I will remember for the rest of my life (something I can’t really say about a large number of modern games). But while most of these moments are completely epic, there are two, more understated sequences in particular that hold an extra special place in my heart.

While I will talk about the second moment next season (disappointing cliff-hanger!), let’s experience one BioShock scene so perfect that, for me, it actually elevates the game from masterpiece to undeniable classic.

First off, since BioShock is so recent, I know there are some people out there that may not have played the game yet. If you are one of those people, please stop reading now, as I would feel horrible ruining any moments from this instant classic.

Okay, for everyone that is still around: BioShock is a complex, beautifully designed first-person shooter that takes place in the wondrous, terrifying underwater world of Rapture. 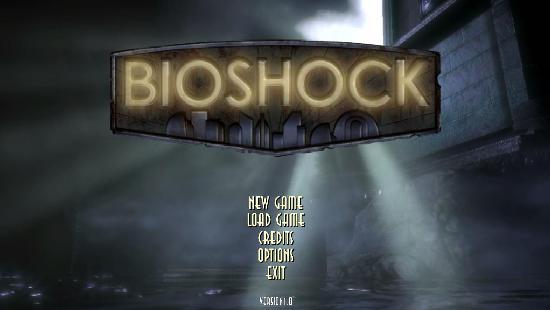 In the game, you play as Jack, the only survivor of a horrible plane crash that maybe-not-coincidentally wanders into this strange world of Rapture in the hopes of finding help.

Of course (as it would be a boring game otherwise), you get enveloped in a rich mystery full of huge plot twists and revelations, peppered with intense gun battles between you and the insane residents of the submerged utopia.

About halfway through the game, you wander into a section of the city called . Unlike the previous boroughs, is covered in lush foliage which provides oxygen to the denizens of Rapture.

Through some unfortunate circumstances, you come to find out that Andrew Ryan, the main villain of the game (at this point), worked closely with a professor named Julie Langford (the creator of Arcadia) to actually sell the oxygen from the plants to the citizens, rather than just let everyone enjoy it for free.

Since Rapture has since morphed into a desolate wasteland full of, to put it bluntly, crazy people, Ryan has released a chemical into the air with the intent to kill all the remaining plants, taking away every last ounce of oxygen. 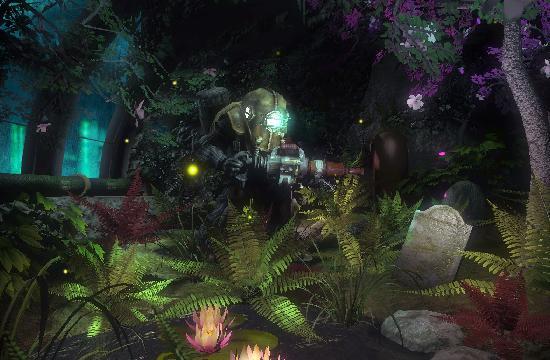 Finding out that Professor Langford has changed her selfish ways, you decide to seek her out and ask for her help in saving the plants and bringing some life back to the city.

After a long journey, you finally arrive at Langford’s office. And this is where the next Memory Card moment occurs: the message in the glass.

As you approach the door to the office, you pass a huge window that gives you a perfect view of the contents of the room, including Langford (hard at work) and her scientific equipment.

Once at the door, instead of opening automatically, it locks, sealing Langford inside (and you out).

Heading back to the window, Andrew Ryan suddenly booms to life on the loud speaker, addressing Langford as she works. He basically tells her that she betrayed him and shouldn’t have made the (unfortunate) decision to help create a formula to bring the foliage back to life.

Before Langford even has time to react, her office quickly fills with the same chemical used to kill all the trees and flowers.

Just after seconds, your view into the office is obscured as the thick, yellow chemical fog covers everything inside. you can hear is the sound of Langford struggling and begging for her life.

If that sequence wasn’t shocking and dramatic enough, out of nowhere Langford presses her finger against the glass separating her and you. She slowly starts to write something in the fogged up window, the squeaking sound of her skin on the glass echoing in your ears.

After her message is complete, Langford collapses, her body smudging a section of the glass as it falls lifeless to the ground.

After this tragic scene occurs, the door to her office opens, letting you inside as the gas dissipates.

Once inside the office, you quickly look for any remaining evidence of Langford’s work. In the corner of the room you see a safe, which, unfortunately, is locked. And, of course, you have no idea what the combination is.

As you turn around to search the room some more, you realize that the message Langford wrote in the glass is actually a four digit code, almost illegible earlier due to the fact that you were reading it backwards from outside the office. Brilliant!

Not surprisingly, this code opens the safe, giving you access to a recipe for something called the Lazarus Vector, a concoction invented by Langford that promises to revive the trees.

Due to Langford’s last minute thinking, the antidote for the poisoned trees is now only a few easy-to-collect items away, bringing Rapture one step closer to being revived.

You can view this incredibly creative (and creepy) moment right here, but impatient people be warned: it doesn’t start until around 5:40:

BioShock is a brilliant game, but one of the things that makes it stand out is its use of “real-time” cutscenes. And I don’t mean “real-time” as in, “real-time graphics.” Not only is CG used sparingly, most of the cutscenes in the game are viewed completely from your perspective, even letting you move around and look elsewhere while they are playing out.

This concept alone is ingenious and really works in giving the game a realistic feel, but the specific scene of dying Langford giving you her final message takes everything to the next level.

What amazes me about this scene in particular is how seamlessly it weaves every aspect of the game together. And “seamless” really is the perfect way to describe it.

So, let’s break it down, shall we?

The designers obviously wanted you to get to know Langford before you witnessed this scene, so it would be more emotionally powerful. So, what do they do? They throw in some audio logs recorded by Langford that you collect and listen to just minutes from reaching her office. This way, the little back story you learn about her can be that extra punch to the gut once she is killed.

These audio logs continue until right when you get to Langford’s door. Then (seamlessly!), the real-time cutscene begins, as Langford is killed; an emotional scene unto itself, punctuated by the fact that you end up hating Andrew Ryan more than you already do.

So, after all this, the designers know there is a locked safe in the room that needs to be dealt with immediately after this tragic sequence. This, I think, is where the most creative decision occurs and really proves why BioShock is such a step above other games of its type.

Instead of the combination to the safe being written on a random sheet of paper in the office, or scribbled on some random wall in some random room that you must unknowingly hunt down, the code is actually written by the person who most likely would be the only one who knew it at all. Although it seems like an obvious choice, this creative decision really changes everything.

Just think about how it all (seamlessly!) falls into place: Langford (the only person who knows the code to her own safe) decides not to write it down anywhere to prevent anyone from accessing her secrets (which makes perfect sense). Her character is then killed by Ryan, the same man she once worked with to take advantage of the citizens of Rapture (again, perfect sense). Not only is she killed by the very gas she is trying to neutralize, that same gas is the reason that Langford is able to tell you the secret combination.

Without the glass fogging up, Langford could never have written it on the window with her finger. If someone just shot her (or she died in some other horrible way), the code could never have been communicated to you and the designers would be forced to just do something completely ridiculous and unbelievable in order to have you be able to find out the combination (such as the aforementioned random piece of paper, etc.).

One thing after another, each event seamlessly flows into the next. No detail is unaccounted for, and, in the fictional world created by the game, every creative choice makes perfect, logical sense. This whole remarkable achievement is never apparent more than in this scene.

Even aesthetically, the scene excels in getting across what it is trying to accomplish. Watch again and listen to the sound of Langford’s finger rubbing on the glass. That sound alone I don’t think I will ever forget. Even the way the combination to the safe appears on the window in front of you is staggering. I mean, I don’t know how else to describe it except to say it really feels like it is written by a living, breathing human being. The code doesn’t just magically fade in; there are pauses, mistakes, uneven lines. Combined with the eerie finger on glass sound, the effect is haunting, to say the least.

Throughout the entirety of BioShock there are many moments like this, but Langford writing the message in the glass exemplifies the perfection that can be achieved in a video game and really stands out to me as the most classic moment I remember from the game.

Hopefully future designers will be inspired by this jolt of creative genius to turn what could be a traditional gaming moment into something genuinely innovative and like nothing ever seen before.

Now, one final thing (the sappy part!): I really can’t thank you all enough for reading this feature every week … but I will try. Thanks for the positive feedback. Thanks for letting me discuss my fondest gaming memories every week without laughing at me for crying during Elite Beat Agents. Just thanks for everything.

The Memory Card will return soon …